Following on from The Martian (2015) — Ridley Scott’s biggest box office hit to date — the director has again returned to the sci-fi horror franchise that made his name. Alien: Covenant sees Scott doing his level best to answer the questions left unanswered by Prometheus (2012), while also returning to the format of the original Alien (1979). Perhaps recognising Prometheus’s limitations and failings, Covenant brings back H.R Giger’s iconic xenomorphs, and moments of tension and gore appear with greater regularity.

In Covenant’s prologue, Prometheus’s eerily placid android David (Michael Fassbender) is re-introduced. Speaking to his maker Weyland (Guy Pearce) in flashback, themes of creation, godliness, and humanity are again revisited. From there, we move to the colony ship Covenant, a decade after the Prometheus went missing, which is manned by an identical android named Walter (Fassbender again), caring for 2,000 sleeping colonists waiting to reach their destination. The long stasis of the ship’s crew is cut short, however, when a neutrino shockwave strikes their ship.

Oram (Billy Crudup) takes up his role of first mate after the cosmic incident, but it’s terraforming expert Daniels (Katherine Waterson) who becomes the film’s protagonist after losing her husband. When a potentially human signal is picked up, originating from an unknown planet, Oram decides to divert their damaged ship there. It’ll come as no surprise to discover that this planet isn’t ripe for human colonisation, and landing there turns out to be the first of many fatal errors.

It’s from this point on that Scott starts to give fans of the Alien franchise what most found lacking in the prequel Prometheus. Extra-terrestrial spores infect two of the security personnel accompanying the expedition team, and, as any Alien aficionado will know, the infectious species enters the human body and emerges the most gruesomely violent fashion. Here, Covenant doesn’t disappoint: every scene of body horror are shot with a frenetic energy and fast-cutting style, underpinned by the nervous tension of crewmen who can’t possibly outmanoeuvre the resulting alien lifeforms. 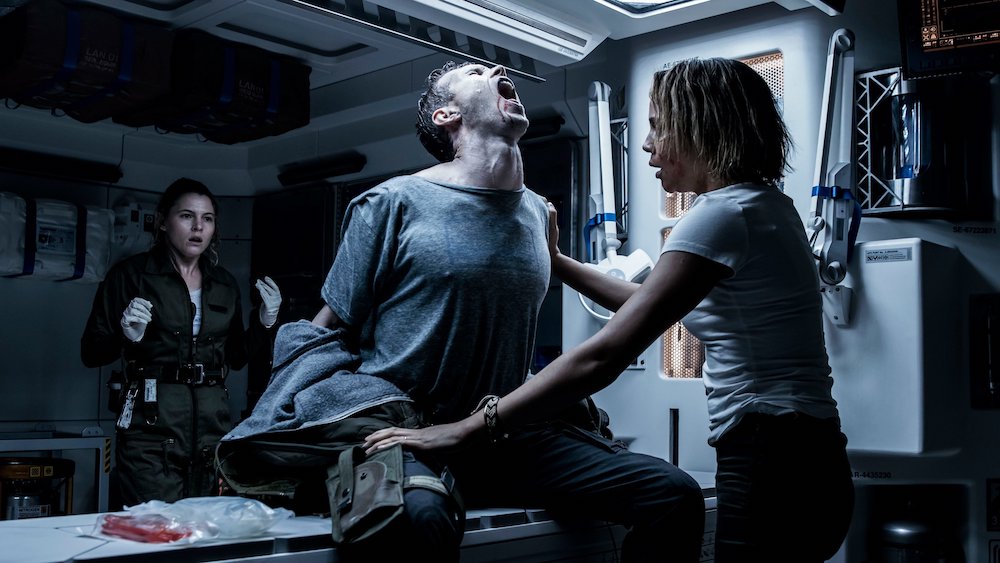 Unlike Alien, our desire to actually see the xenomorphs isn’t denied for very long, but the transition between the machinations of the plot and the alien-heavy finale isn’t the smoothest. Scott clearly values the characters and wants to develop them in a way only truly achieved by his original movie. Like Prometheus, none of the strengths of this film lie with the human characters, and their development is of little consequence. Whether that really matters is up for debate. You’ll never convince me the human-hunting alien action isn’t what makes an Alien film worth watching, however, and those aspects of the film are handled expertly.

Scott knows how to capture a striking image, as even Prometheus was full of them. The same is true with this sequel, thanks to the excellent in-camera work, limited use of digital effects, and vast physical sets. The Covenant ship was made to scale, with every switch and button there to be touched for real. Ridley Scott is an artist second and an entertainer first, so there’s more than enough in Alien: Covenant to please his fans and admirers.