After the fire and fury of “The Bells“, it was inevitable the series finale of Game of Thrones would be a more sedate affair. I expected as much because every season’s followed that pattern, with the penultimate episode being an action-packed crescendo with the finales on mopping up duty. What I didn’t expect was for the ending of a truly epic TV phenomenon to end without many emotional highs, and with no cruel shocks up its sleeve. It was an efficient climax that did what it had to in the aftermath of a divisive setup but, considering the peaks of what Game of Thrones delivered in its season 1–4 heyday, it was underwhelming.

For the most part, “The Iron Throne” took place entirely inside the charred remnants of King’s Landing after Daenerys (Emilia Clarke) shocked her northern allies by torching bystanders with fiery dragon breath, consumed by tyrannical anger the writers have done a patchy job to make seem plausible. The signs of Dany’s darker side were always there, absolutely, often kept in check by her more levelheaded friends and advisors, but believing she’d needlessly slaughter a city of innocent people was, for me, a bridge too far. I have no doubt the books will do a far better job with the same arc, as they have the benefit of delving into the thoughts of the core characters. 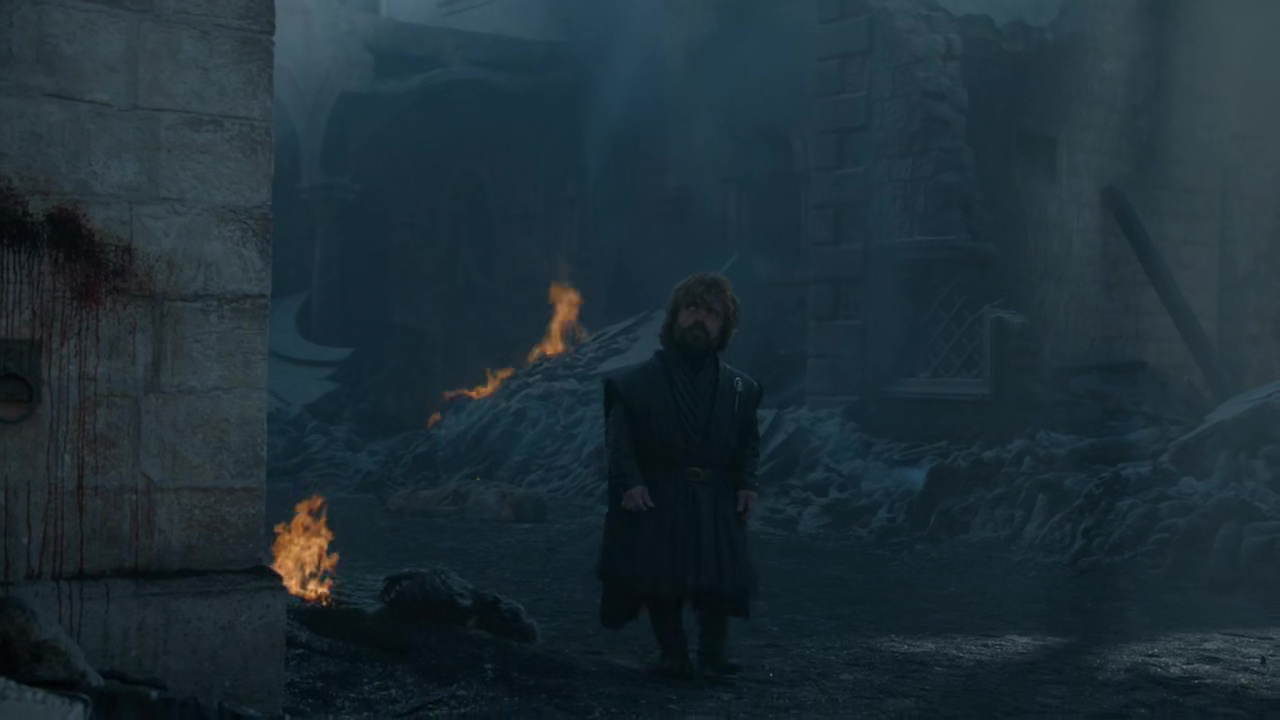 The best part of the finale was the first half, with the devastating horror of what occurred at King’s Landing sinking in. Jon Snow (Kit Harington), Davos (Liam Cunningham) and Tyrion (Peter Dinklage) traipsed through the wreckage of Westeros’s once-magnificent capital, sickened by their Queen’s handiwork. And yet they’re still part of the winning team, even in the eyes of Grey Worm (Jacob Anderson), who’s out loyally cutting the throats of surrendered soldiers in the streets. There was wonderful queasy feeling about seeing those three surveying the desolation, looking like the only sane people left in the world, unable to make their true feelings known because of how the ferocious Dragon Queen might react. The only problem is that, frankly, it seemed ridiculous that Dany wouldn’t be more self-aware and know her allies aren’t going to be rejoicing over her despicable behaviour.

Tyrion was the first to make his feelings known, after finding his siblings Jaime and Cersei dead and buried under rubble in the Red Keep’s crypt. He resigned as the Queen’s Hand and was promptly taken away by Unsullied guards for execution, while Jon did his best to maintain the illusion he’s still loyal to his crazy girlfriend. He’s then warned by Arya (Maisie Williams) that despotic Dany won’t stop with King’s Landing, as she’ll undoubtedly “liberate” the northerners of Winterfell from their sister Sansa (Sophie Turner), which is exactly what Tyrion echoes after Jon goes to meet him later. Tyrion’s always been a man of wise words and, for some reason, Jon needed convincing that Dany’s unsalvageable as a person and needs to be eliminated for the good of the people he’s always protected. Duty over love. He’s not the brightest spark, but sometimes you wonder if the writers have a grip on what any rational person’s reaction would be to indefensible genocide. 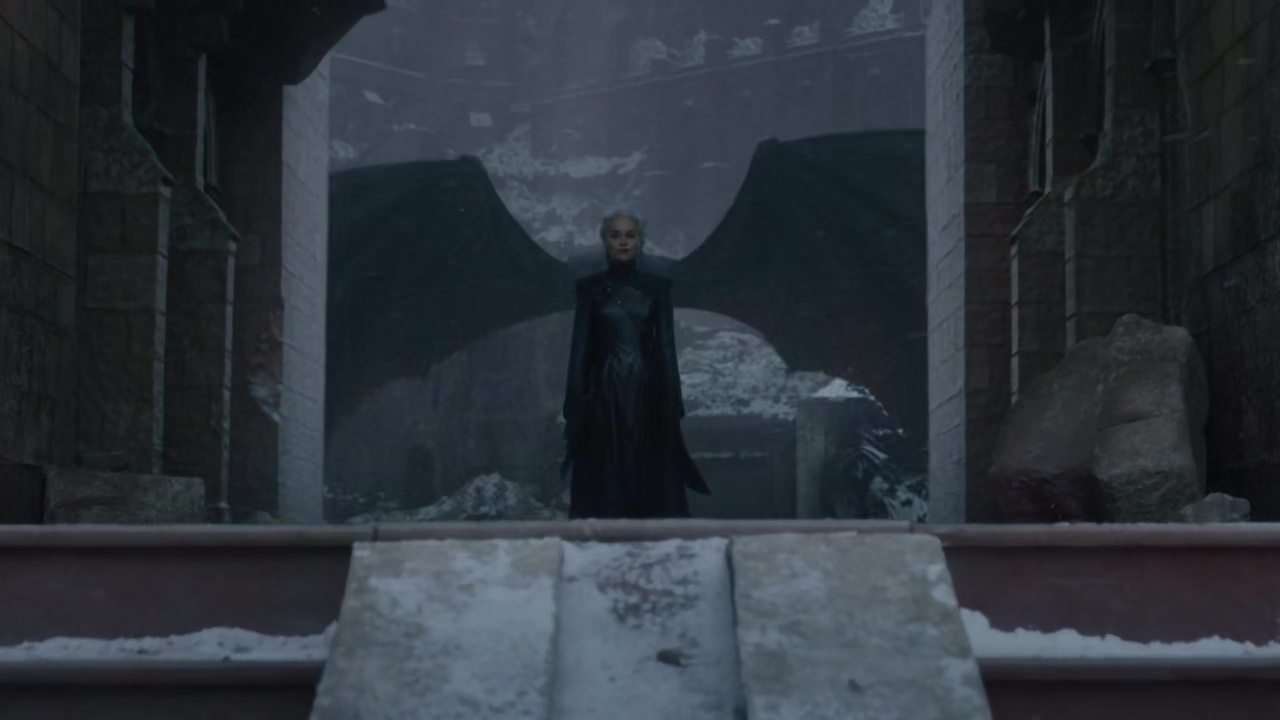 Dany’s long-long-awaited reign as Queen of the Seven Kingdoms ended no sooner had it begun. Jon’s able to enter the throne room because a sleeping Drogon doesn’t perceive him as a threat, and Dany’s conveniently unprotected by armed guards. I presume that’s because few people are even left alive to attack her, but it still felt odd that Dany wouldn’t have a few bodyguards close by. Her overconfidence works in Jon’s favour, of course, as he’s able to meet with Dany and try to persuade her to stop fighting and become the benevolent ruler she claimed she’d be… but his words fall on deaf ears. Her version of “breaking the wheel” isn’t shared by anyone else. They embrace, kiss, and Jon uses their last intimate moment to stab and kill her at close quarters. Ice vanquished fire.

After all these years trying to seize the Iron Throne, Daenerys never got to physically sit on. Unexpectedly, Drogon promptly arrived and found his “mother” dead on the floor and decided to melt the Iron Throne with bursts of anguished dragonfire. As Drogon never touched Jon, it’s left for viewers to wonder if the beast wasn’t intelligent enough to realise who murdered its mother, or if it wouldn’t immolate Jon because it somehow knows he’s also of Targaryen blood. Maybe both? And it somehow knew the Iron Throne was symbolically responsible for everything or did it just happen to be in the way? Regardless of our slippery grasp of dragon psychology, the last we see of Daenerys Stormborn of House Targaryen, the First of Her Name, Queen of the Andals and the First Men, Protector of the Seven Kingdoms, the Mother of Dragons, the Khaleesi of the Great Grass Sea, the Unburnt, the Breaker of Chains… is her limp body being flown away in the talons of Drogon. 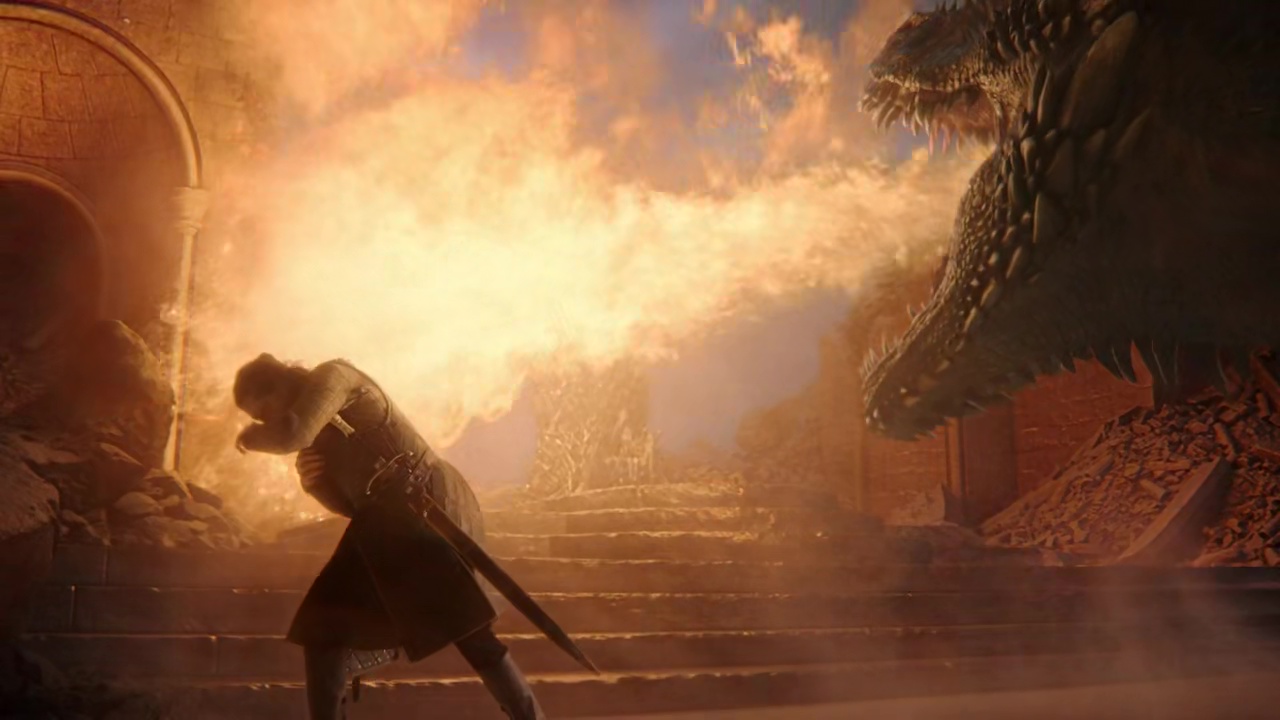 Weeks later, Tyrion and Jon are imprisoned for treachery and regicide. Oddly, it seems the Unsullied deferred to the Westerosi way of things by agreeing to host the lords and ladies of the land to decide what happens next. Uh, OK. Tyrion’s expecting to be executed but inspires the assembled nobility by suggesting they select a new ruler and end the centuries-old practice of hereditary monarchy that’s never delivered lasting peace. Tyrion suggests Bran (Isaac Hempstead Wright) should be the new ruler of Westeros, as he literally carries with him the memory and wisdom of their society from the beginning of time, so who better to lead them into a new future. Everyone agrees although Sansa seizes a chance to reclaim northern independence once again, meaning “Bran the Broken” becomes King of the Six Kingdoms and Sansa’s later anointed “Queen in the North”.

Tyrion’s then made the Hand of the King, later seen running the new Small Council comprised of Bronn (Jerome Flynn) the Lord of Highgarden and Master of Coin, Brienne of Tarth (Gwendoline Christie) the Lord Commander of the Kingsguard, Davos the Master of Ships, and Samwell Tarly (Jon Bradley) the Grand Maester. They set about discussing how to rebuild King’s Landing, while the Stark siblings go their separate ways: Arya has chosen a life of seafaring adventure, heading west to find new lands; Sansa has a coronation at Winterfell; and Jon’s life is spared by sending him back to the Night’s Watch at Castle Black, where he’ll live out his days alongside Tormund Giantsbane (Kristofer Hivju) and the Wildlings. Only now, the Wall isn’t a barrier to protect them from supernatural forces and giants beyond, it’s become a gateway to a new frontier of exploration. 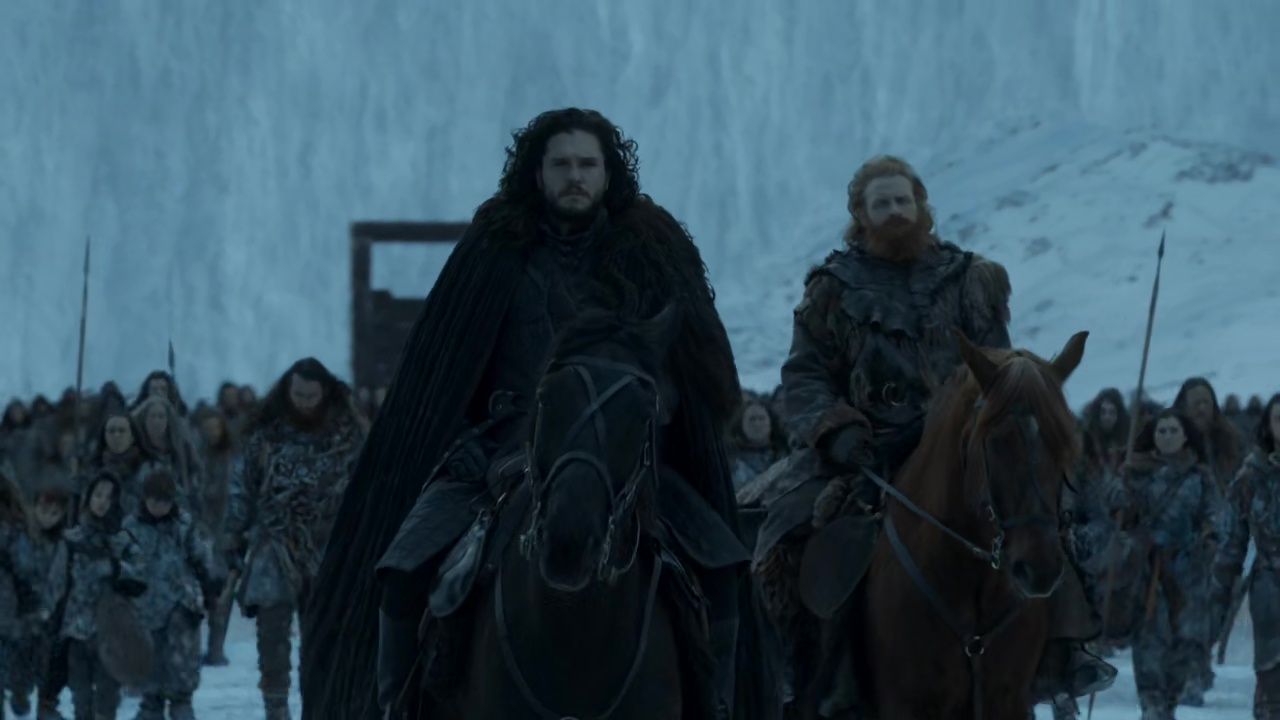 It’s always a challenge to end a long-running TV show with an episode that satisfies everyone, let alone one that became a worldwide phenomenon and pushed the possibilities of small-screen entertainment to the limit. There was a lot riding on Game of Thrones sticking the landing. The eighth and final season has stoked a great deal of debate, with a lot of disappointed fans spewing vitriol online. Did you expect otherwise? Some of the criticism can be defended or accepted because of the difficulties in adapting as-yet-unwritten books, but it’s true this final season didn’t have the room to make some of its bigger developments hit home as intended. Too many big moments were rushed through.

“The Iron Throne” struggled with the weight of expectations and ultimately ended things on an adequate but muddled note. I liked how Dany met her end, in principle, but it wasn’t very emotional to watch. How can that be? I think it’s partly because Emilia Clarke’s chemistry with Kit Harington isn’t as strong as it needed to be, so their tragic love story never felt like something you were fully invested in. If Jaime had killed Cersei, that would have been a crushing moment (despite us hating Cersei) because we know and understand the strength of their relationship and the deep bond they share as siblings and illicit lovers… but Jon and Dany are just two pieces on a chessboard that had to be moved into a relationship. And it happened relatively late in the arc of these eight seasons— when we had fewer episodes, longer gaps between the seasons, and the writers couldn’t crib from George R.R Martin’s novels to get at the nub of how their romance should have played out. Again, I’m certain the books will do a better job with more time and nuance. 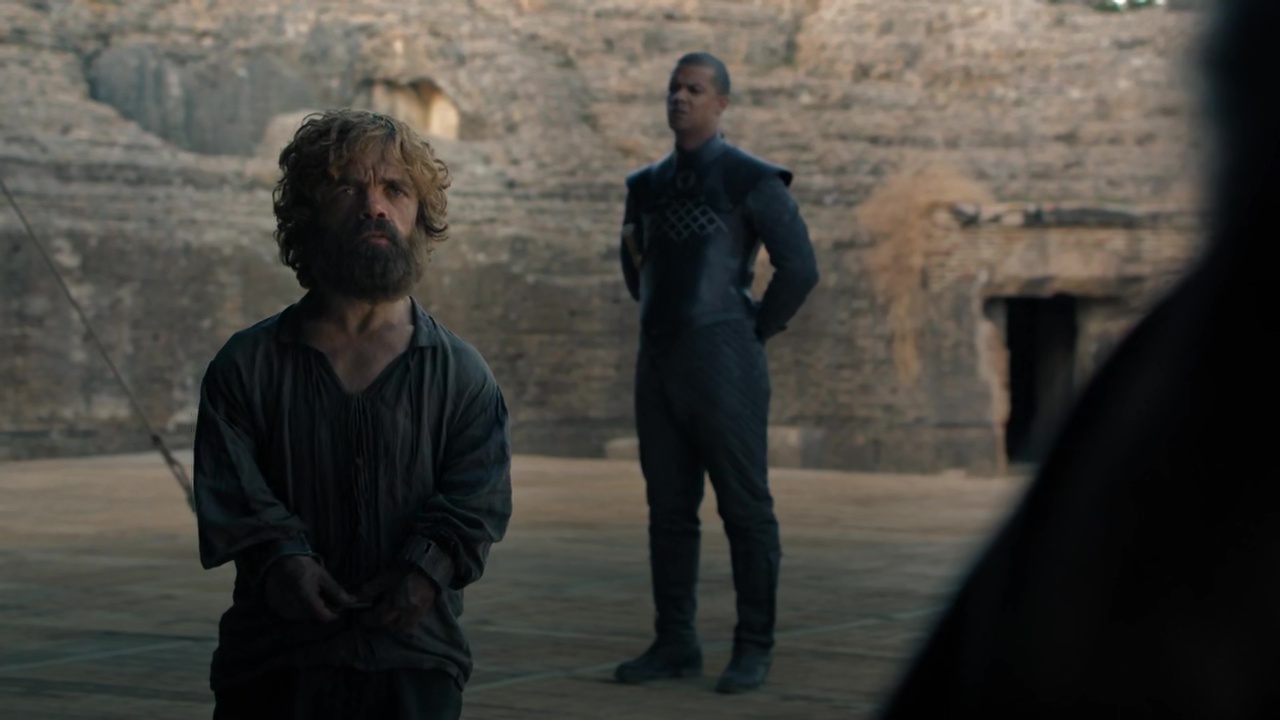 Everything after Dany’s assassination seemed perfunctory, sadly. It was a moderate surprise that Bran was chosen to be King, although I liked Tyrion’s logical reasoning because of his direct link to the past. I’m just not sure ordinary folk would get behind a monarch who doesn’t behave like a normal person and tends to stare through you when talking, although I guess the idea is that Westeros is evolving beyond physically strong and loudmouthed royals who get innocent people embroiled in wars and bloodshed. They’re probably just glad the chance of war has dropped considerably. I was relieved they didn’t go through with Sam’s truly progressive idea of constitutional democracy, however, which the assembled lords laughed off as a ludicrous suggestion. Maybe in a few more hundred years, Sam! The new Grand Maester was born ahead of his time.

I also liked that Jon went back to the Night’s Watch as penance for his crime in the eyes of the Unsullied, which is where he began this journey in the first episode. It helped bring the story full circle in a pleasing way. It was a fitting end for a kindhearted man who was always uncomfortable with the trappings of his Stark name, ability to inspire a following, and the responsibilities heaped upon his shoulders. Now he’s free to do as he pleases in the frozen north that always called to him. An ending somewhat echoed with Arya sailing westward with Needle, searching for a spin-off series perhaps? It was also fantastic to see Brienne finish writing Ser Jaime’s history, ensuring his legacy won’t just be as “The Kingslayer”, but everyone will know the good deeds he did that redeemed his soul. 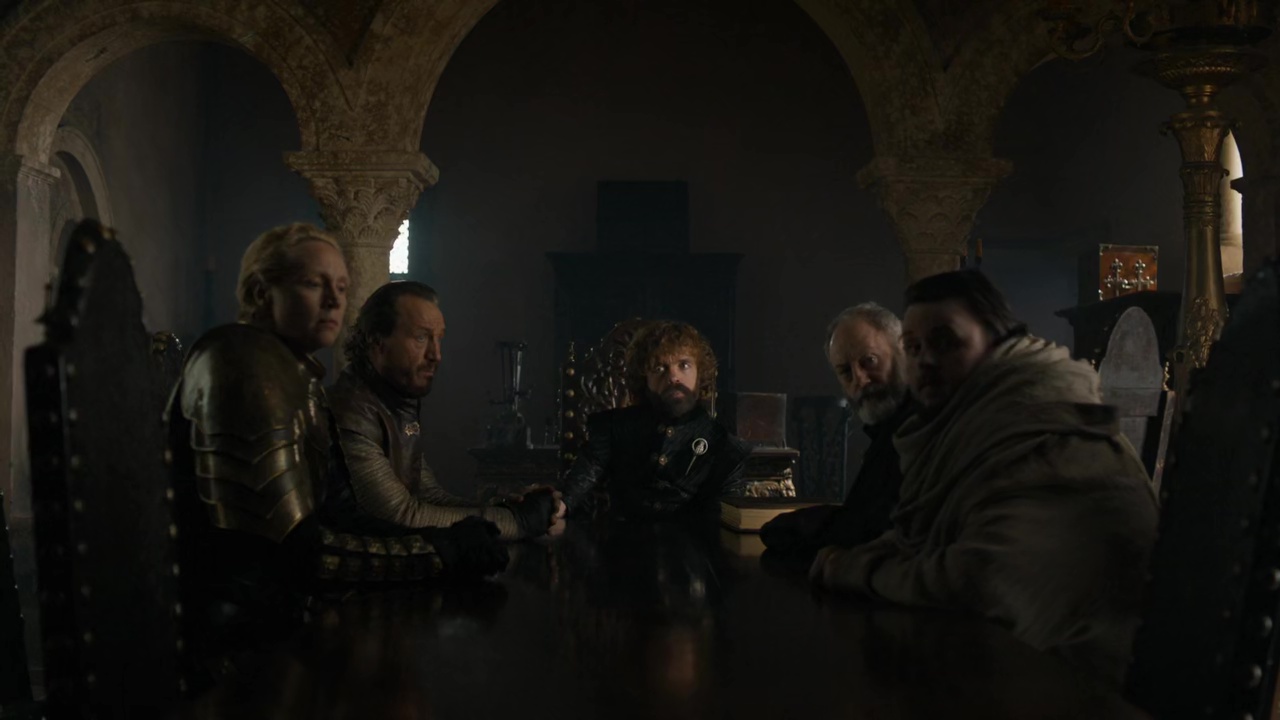 “The Iron Throne” was a bittersweet farewell for this HBO show, awash with feelings of both disappointment and satisfaction. Maybe that’s because things worked out reasonably well for almost everyone involved, and for a story that once delighted in doing the opposite of what was expected by conventional fantasy storytelling, it wasn’t unreasonable to be braced for one last low blow. At the very least, I expected Tyrion and Jon to be executed after fulfilling their destinies, but knowing they’ve paved the way for a brighter future.

It was also an episode that felt more intimate than expected, in the sense the world of Westeros melted away and everything took place in only a few locations with a limited number of characters. I wanted a sense of what social upheaval and scars Dany caused by almost destroying King’s Landing and incinerating thousands of people, but that was impossible because of where the focus was placed on the story. It was more about the upper-classes sorting out a big mess, with what passes for a happily ever after.

And now my watch is ended.