There have been epic battles on Game of Thrones before, but never one this early in the season, or involving no clearcut “enemies”. Matt Shakman (Fargo) makes his debut on the series, with a complicated sequence that broke an industry record for the most stuntmen set ablaze. “The Spoils of War” was certainly a breathtaking experience. I was less emotionally invested than I’ve been in most of the show’s previous battles, but that didn’t matter too much. It was a cathartic moment in many ways, but also tinged with a sense of sadness. 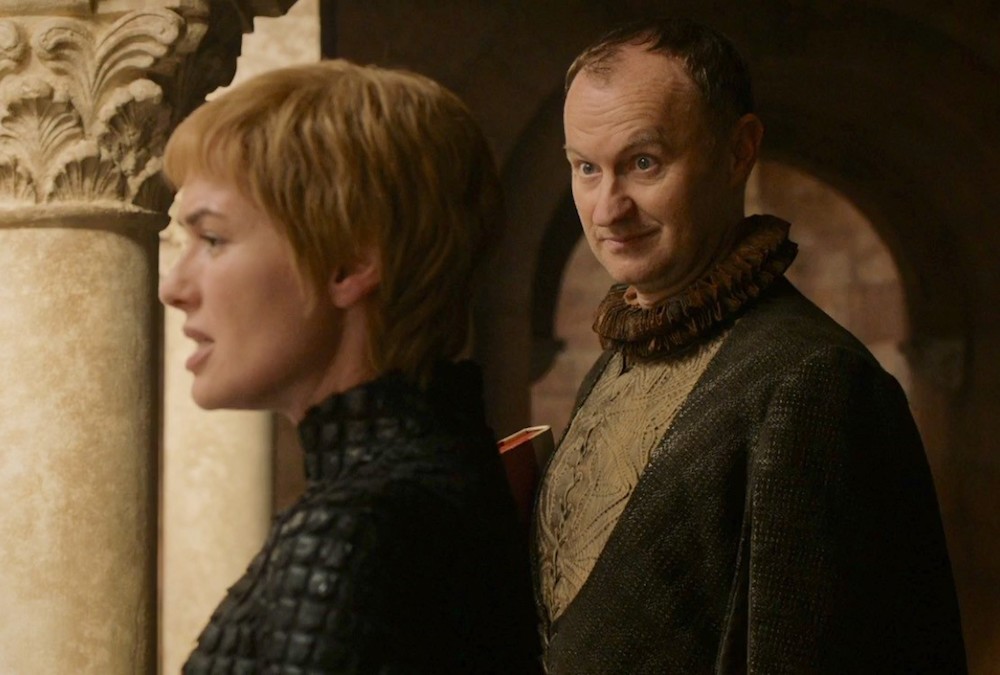 There wasn’t much happening in this corner of Westeros, save for getting confirmation that the Lannister’s invasion of Highgarden has resulted in Cersei (Lena Headey) repaying her family’s substantial debt to the Iron Bank in gold bullion. The bank’s sly emissary, Tycho (Mark Gatiss), seems rather pleased and delighted to get first-hand experience of a Lannister living up to their family’s motto (“a Lannister always pays his debts”), but wasn’t quite ready to back Cersei’s plans until the loot’s been safely delivered.

I was less sure about what Cersei meant when she said Qyburn (Anton Lesser) has contacted the Golden Company to help in the fight against Daenerys (Emilia Clarke), who are a respected company of sellswords. A bit of light research reveals they have 10,000 men, several thousands horses, and elephants, so they’ll certainly be handy in light of how this episode ends for the Lannister’s. 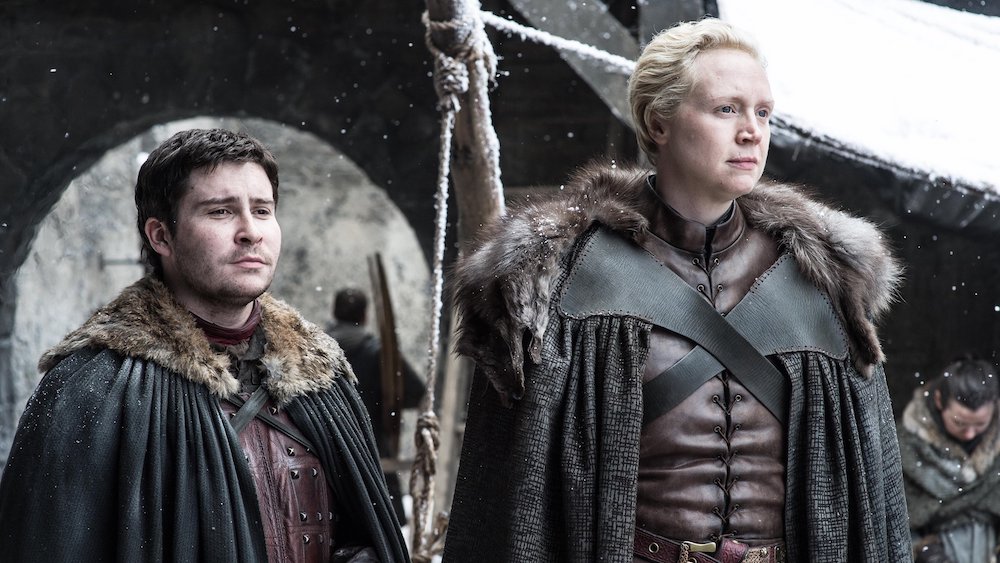 There was another Stark reunion, with adventurer Arya (Maisie Williams) returning to Winterfell to join her sister Sansa (Sophie Turner) and brother Bran (Isaac Hempstead Wright). The Starks kids are all coming home to roost, each changed into adults by the harsh world beyond their land. Sansa has poise and confidence as ‘The Lady of Winterfell’, taking to her role like a duck to water; Bran’s undergone a complete personality change, as he loses himself to his new undertaking as the ‘Three-Eyed Raven’, much to the sadness of friend Meera (Ellie Kendrick) who think Bran “died in that cave”; and little Arya’s now an extremely talented swordsman, as she proved in a delightful battle with Brienne (Gwendoline Christine) in the courtyard, pulling off some incredible moves to the surprise of the spectators. It was especially good to be reminded of those who’ve helped Arya become a warrior to underestimate, from Syrio, to the Hound, and the Faceless Men. Each taught her a different style, which she’s merged into one combat discipline.

But in some ways the more interesting thing is trying to get inside Littlefinger’s (Aidan Gillen) head, as he clearly has some masterplan he’s busy hatching. First he gives Bran the Valyrian dagger that was used to try and kill him in season 1 by an assassin after he was crippled, before Catelyn Stark and the direwolf Summer intervened. Bran’s mother noticed the dagger being used was very ornate and made of Valyrian steel, which prompted her trip to King’s Landing to find out who wanted her son dead. Littlefinger told her it’s his, having lost it in a bet with Tyrion Lannister (Peter Dinklage), which was likely a lie to set the Starks against the Lannisters. This is what led Catelyn to imprisoning Tyrion for the crime.

So now the dagger’s being used again by Littlefinger, no doubt for another wily deception. But he hasn’t reckoned on Bran’s ability to traverse space and time, after hearing the young Stark use the phrase “chaos is a ladder” which he spoke to Varys (Conleth Hill). Arya was also taken aback by Bran already knowing about her kill list, which is “impossible”. Whatever Littlefinger’s up to, I wonder if he’ll begin to see Bran as too much of a problem because he can see right through his schemes, and want to remove him from the picture? Arya now has the dagger, which will certainly prove useful when confronting any White Walkers… 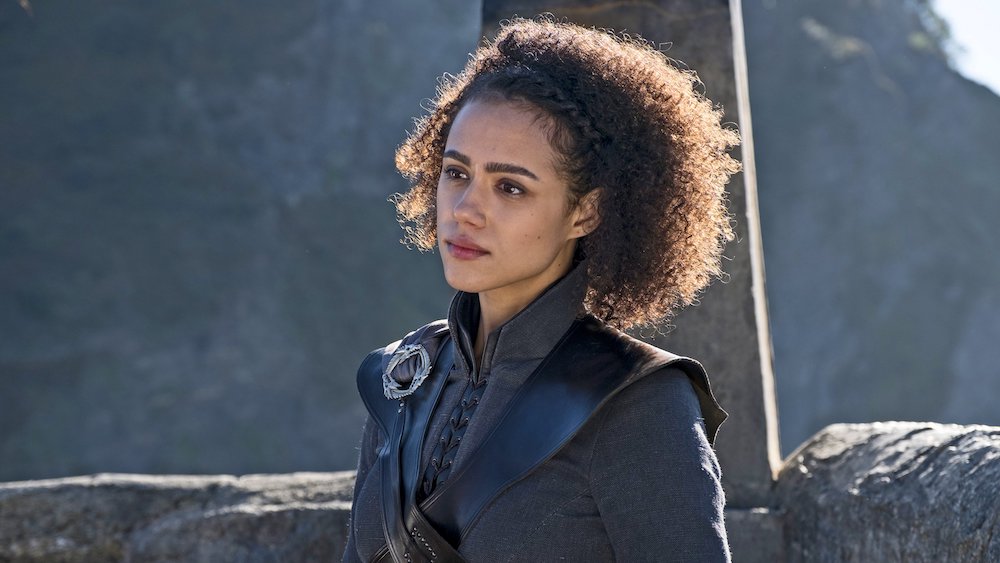 One of the most emotional moments was seeing Jon prove to Daenerys (Emilia Clarke) that his farfetched tale of White Walkers and an “army of the dead” might have some basis in truth. Taking her beneath her ancestral home, down through a cove, Jon’s discovered the dragonglass he intends to mine and forge weapons, but also some ancient carvings and paintings created by the Children of the Forest. And, more importantly, their depictions of them working alongside Man to defeat those same azure-eyed White Walkers. Daenerys seemed to change her mind entirely with this unexpected evidence, even if it’s hardly proof of anything beyond an ancient civilisation believing in myths and legends. I did enjoy knowing that the bowels of Dragonstone were once used for the same purpose of keeping the northern enemy at bay, however. Another example of Westerosi history repeating itself.

Rather cleverly, Daenerys is still only going to offer Jon her support in the north if he “bends the knee”, which Jon still isn’t sure about doing. Dany’s belief that the north will follow her, if their ‘King in the North’ does, is probably true, but there’s clearly more to be discussed about how a new world order is going to be achieved. My own pet theory has always been that Westeros will move towards a nascent form of democracy, putting an end to the prevailing idea that rival dynasties fight for control of a single throne, but we’ll see…

Dany also received news that the Unsullied were tricked at Casterly Rock, and now their fleet has been destroyed by the Iron Fleet; while Highgarden has been taken by Jaime (Nikolaj Coster-Walder), meaning the Lannisters can feed their armies far better than Dany can her own. These are some real problems to work through, and it was understandable that Cersei has started to doubt Tyrion over waging a war against his own family. She instead turned to Jon, who rather unexpectedly told her to resist any urge to fly into battle atop a dragon, because the people expect something different and better from a new ruler. The days of turning thousands of men to ash using an enormous beast seem ancient and barbaric, even for present-day Westeros.

We also saw Theon Greyjoy (Alfie Allen) come ashore aboard the last remaining ship, only to find an aggressive Jon waiting for him. Luckily for Theon, his role in helping Sansa escape Ramsay Bolton’s sadistic clutches was enough to spare him a beating for his other crimes against his Stark cousins. But with Jon wanting Dany to head north and fight the dead, and Theon now wanting Dany to help him rescue his sister Yara at King’s Landing, it seems Daenerys is being pulled in too many directions and is beginning to lose the advantage she once had. 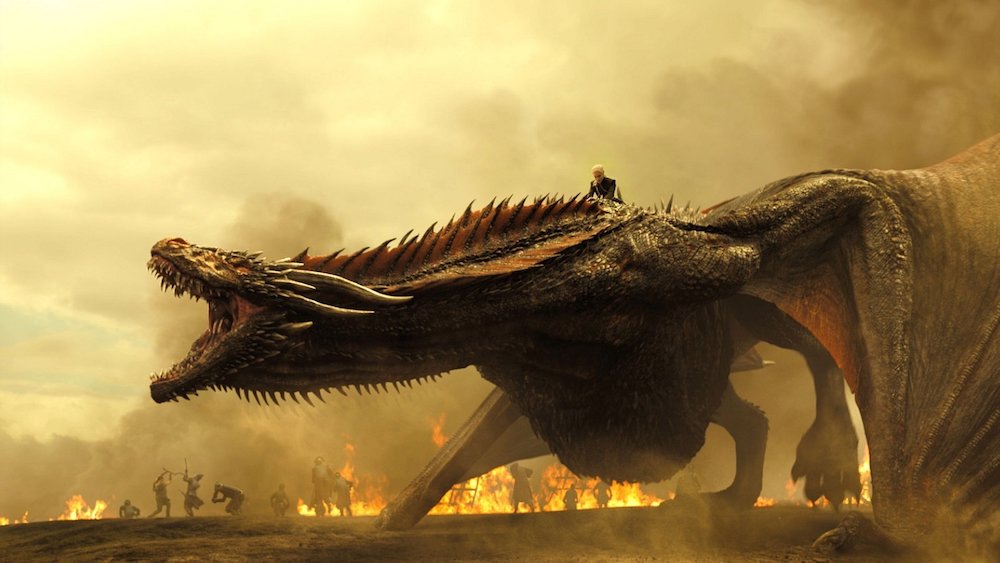 The unequivocal highlight of “The Spoils of War” was its climactic set-piece, with Jaime Lannister, best-friend Bronn (Jerome Flynn), Dickon snigger Tarly (Tom Hopper), and Randyll Tarly (James Faulkner), overseeing the transport of Highgarden’s food back to King’s Landing. But their upbeat mood was cut short when a Dothraki horde came screaming over a hilltop, with Drogon following close behind with the flaxen-haired Khaleesi perched on his neck.

This was our first taste of a Westerosi battle involving a fire-breathing dragon, and it sure didn’t disappoint. I preferred season 6’s ‘Battle of the Bastards’ in many ways, but it was nevertheless a huge thrill to see Drogon incinerating whole swathes of people, as the Dothraki tore soldiers apart on their horses.

But Game of Thrones isn’t as clear cut as most other stories about great wars. We’re inclined to side with Daenerys, especially because she’s suffered a few defeats just recently, but we also like Jaime (most of the time) and Bronn’s a favourite it would be a shame to see turned into a cinder. So it’s an interesting emotional tug-of-war when these mix of characters go into life-or-death battle, and the staging of the fight did a great job making you note the tragedy and horror in what Daenerys was doing.

Indeed, with Tyrion watching the fiery slaughter from a short distance away, I was briefly inclined to think he may be undergoing a change of heart. He won’t side with his sister Cersei over Daenerys in this war, but he vocalised support for his brother Jaime to not foolishly attack an earthbound Dany after Bronn had managed to injure Drogon using Qyburn’s ballista weapon. And as Jon Snow mentioned earlier, all Dany is proving by involving dragons in mass murder is a return to the old days of Targaryen patriarchs ruling by fear. She’d tempered her original plan to lay waste to the Red Keep, risking civilian lives, and this was a tactical move focusing on soldiers, but we’ll see how Cersei spins it to her people.

The battle of Roseroad was very one-sided and a clear victory for Daenerys because of her aerial advantage, but also a reminder that her dragons aren’t indestructible. She was lucky to survive this battle herself! It’ll be interesting to see if we’re going to continue with the idea of Daenerys taking matters into her own hands, heeding Olenna Tyrell’s advice to “be a dragon” and stop taking advice from clever men like Tyrion, or if this was a big risk she got away with… and only just. Maybe it was a bit of both, and fortune favoured the bold, but Jon Snow a notably calming influence.

Finally, I’m sure Jaime Lannister will be fine. He was last seen sinking to the bottom of a lake in heavy armour, after Bronn prevented him becoming toast after galloping straight for Dany and Drogon with a spear. It would seem an odd way to write him out for good, although Coster-Walder has mentioned the script contained the line “one of our main characters is about to die”, and the end credits played in silence (as if in tribute to the passing of an important figure). So, maybe I’m wrong and this was indeed Jaime’s unexpected farewell. But why kill him with a drowning, when he could’ve literally died in a blaze of glory seconds before? If he is dead, it’ll certainly make things very interesting now Cersei’s lost her true love, but I just don’t think he is. But Cersei may just believe her brother’s been killed in battle, for awhile, and it’s likely his apparent demise will provoke her into becoming the tyrannical “Mad Queen” we know lurks within her…