For a movie with such a modest budget, to put it kindly, She-Devils on Wheels (1968) makes some bold promises on its poster. In brash red and green type, it practically screams at the reader: “Guts as hard as the steel of their ‘hogs”, “Man-eaters on motorcycles, feared by the men they use as lovers”, “Female hellcats ruling their men with tire-irons as their instruments of passion!” Lounging next to these lofty claims is a woman in a leopard print vest, and just beyond her another she-devil on wheels mid-decapitation.

There’s no ambiguity as to what movie lurks behind this brilliant, comically direct artwork. She-Devils on Wheels is, in fact, an exploitation film; one filled with exactly the kind of all-girl biker gang mayhem intimated by the poster. The rare Herschell Gordon Lewis film in which women inflict violence upon men and not the other way around, the film thrusts us into the rough and rugged lives of the Man-Eaters, a gang of women whose two passions are racing their motorcycles and killing men—in that order. Every week they have a race around town to decide who gets her first pick from the “stud line”, a row of male groupies from which the girls pick a sex partner for the day. The code of the Man-Eaters is only one item long: no falling in love. Unfortunately, that’s exactly what the girls suspect is happening when one of their members picks the same stud four weeks in a row. From there, things spiral into a loosely plotted barrage of knife fights, chocolate-syrup-based hazing, multi-gang orgies, and decapitation. You know, normal teenage girl stuff… 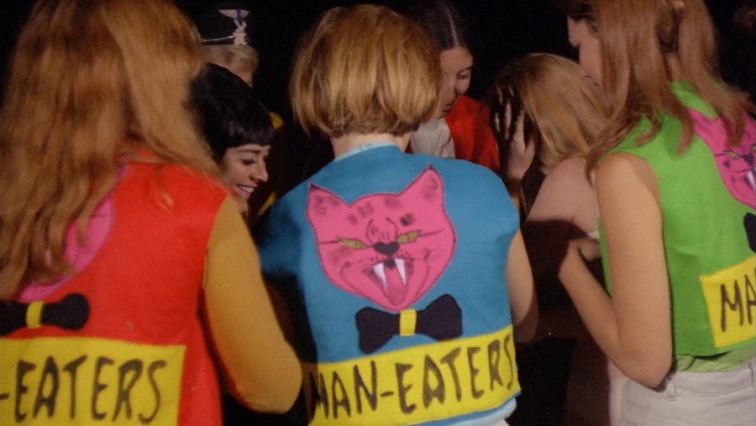 I don’t need to tell you this isn’t Shakespeare, and anyone expecting any kind of compelling narrative will be sorely disappointed by the second or third biker brawl. It’s also, however, not quite H.G Lewis in his prime. The man behind such highbrow classics as Blood Feast (1963), Color Me Blood Red(1965), and A Taste of Blood (1967) is no stranger to lightweight sleaze. While his films were never anything more than cheap fun, they consistently delivered the goods as concentrated doses of goofy, gory entertainment.

Oddly enough, in a film that seems tailor-made for high-octane obscenity, She-Devils on Wheels ends up dragging more than a little. In between the scenes of motorcycle-fueled chaos, you may find yourself doing the unthinkable in an H.G Lewis movie: checking your watch. Even at a brisk 82-minutes, it still feels a touch light on material. The issue isn’t its absence of memorable characters or hokey plot, especially when considering that that’s the norm for Lewis’ body of work. Instead, it ironically feels as if Lewis was holding back and made the film a little tamer than usual. He’s undeniably a horror director first and foremost, and the campy SFX and buckets of blood in his films are often their biggest draws. Here, tackling something more akin to The Wild Angels (1966) than Psycho (1960), he dials back the bloodshed a little, and without much else to fill out the movie, it meanders on the day-to-day happenings of the gang. 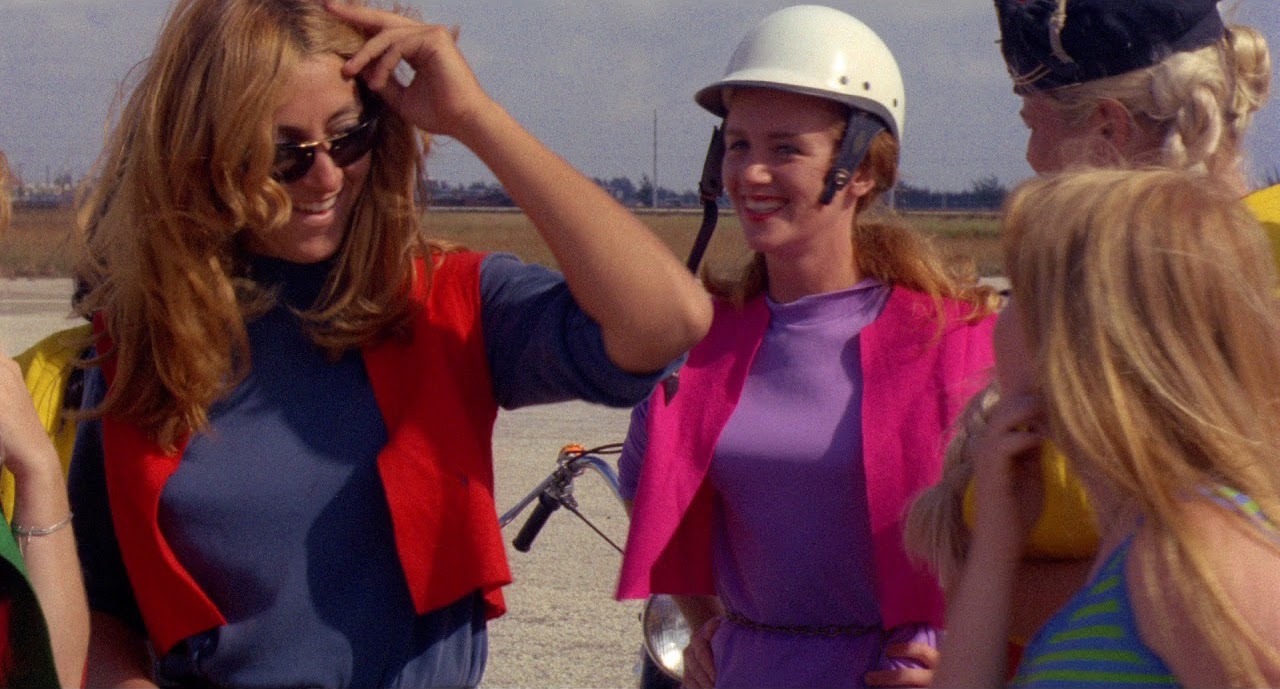 It’s also one of the few Lewis films in which the shoddy production values feel like a hindrance rather than a virtue. The sound is muffled and tinny, the cinematography is sometimes Blair Witch Project-adjacent, and, as per usual, these “actors” couldn’t act to save their lives. Interestingly though, most of the Man-Eaters are played by actual bikers, so their acting inexperience is at least partly excused for by their real-life biker gang experience.

All these gripes over inconsistency and monotony aside, there are some very clear upsides to the film. In spite of some generally more docile material, Lewis does deliver some deeply trashy action sequences that, in small bursts, deliver on the pulpy promises of the film’s iconic poster. It’s hard to mess up a good knife fight or a biker brawl, and even though it doesn’t go quite as far with the violence as the poster suggests, it does feature one hell of a decapitation (as well as, on a lighter note, a whole lot of literal stealing candy from babies).

Of course, the biggest highlight is the unreal dialogue, which is populated by such zingers as “we treat men like pieces of meat. It’s about as romantic as buying a hunk of bologna” and “go fumigate yourself, crap-head!” Lewis’ reputation as the de facto king of cinematic sleaze may not always shine through in the film, but he still knows how to write transcendently trashy one-liners. Ultimately though, for those seeking badass gangs of B Movie women racing and terrorizing men, there are some significantly better options—might I suggest fellow exploitation king Russ Meyer’s Faster Pussycat! Kill! Kill! (1965), which does everything She-Devils does but with far more enthusiasm? Still, for those in search of cheap, fast celluloid trash to consume in any level of intoxication ranging from “buzzed” to “semi-conscious”, this will probably get the job done. 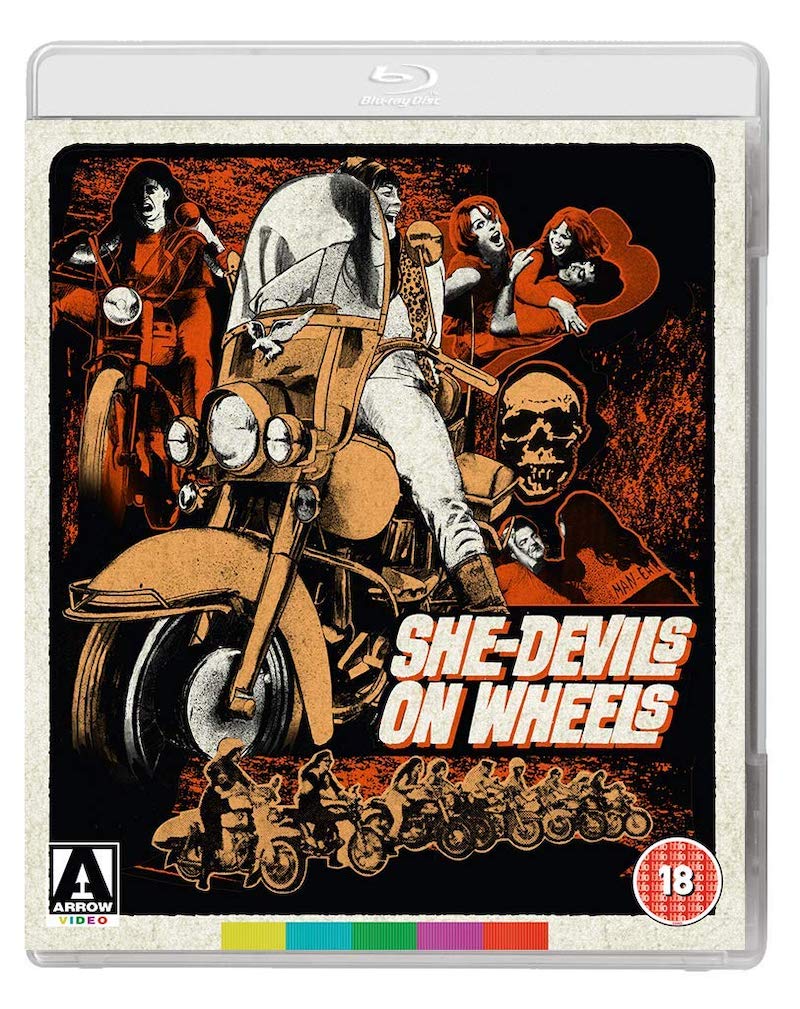