This felt like classic Star Trek, I’m pleased to say. “New Eden” may have relied on well-worn formulas and ideas, but it was a good example of them. Star Trek: Discovery proved it’s capable of doing old things in a way that feels fresh, which is perhaps why Trek veteran Jonathan Frakes (Riker in The Next Generation, director of First Contact and Insurrection) was hired to direct this instalment. The story even had some crossover with those TNG movies, as both featured pre-warp societies.

The “seven signals” mystery is the arc of this season (with the ‘science versus religion’ questions it’s inspiring), and the story by Vaun Wilmott and Sean Cochran found interesting ways to deepen matters. I’m now genuinely intrigued by what’s going on.

The USS Discovery pick up another signal in space, but it’ll take 150 years to reach at maximum warp, so Captain Pike (Anson Mount) orders the “spore drive” back online—thought we’d seen the last of that?—and Stamets (Anthony Rapp) against risks his health to navigate the ship to the distant Beta Quadrant. (Nerdy point, but if this tech presumably gets mothballed, the USS Voyager crew could really have used it.) Anyway, the Discover arrives orbiting the ringed planet of Terralisia, which has been broadcasting a repeated distress call for the past 200 years. The strange thing is that the inhabitants of the planet are clearly a pre-warp human civilisation, so how did they come to be this far out in space before warp drive was invented? 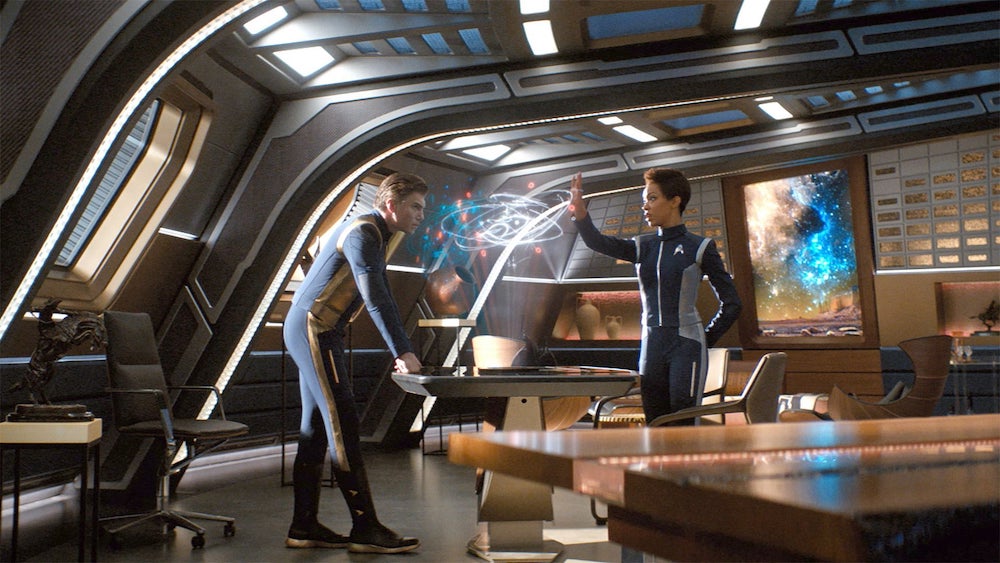 After beaming down to Terralisia to go undercover as people from “the northern territories”, Pike, Burnham (Sonequa Martin-Green), and Lt. Joann Owosekun (Oyin Oladejo) find themselves amongst a society that merged the major faiths of Earth and now worship a deity that once transported their ancestors from Earth to ‘New Eden’ during World War Three (the same “Red Angel” entity Burnham witnesses last week). But while most of the townsfolk have turned their back on the technology their people arrived with, one man called Jacob (Andrew Moodie) has been responsible for keeping their original distress signal active and begins to suspect these newcomers aren’t what they seem.

What can I say? I really enjoyed this one. It felt like truer Star Trek. Even the “cost-saving” idea of having an alien world populated by recognisably human people and contemporary buildings made me grin, but it thankfully fit with the mystery being teased apart. Surprisingly, this is only the second episode of Discovery to even feature an “away mission” (after “Si Vis Pacem, Para Bellum“), and these happened almost weekly on TNG and Star Trek: Voyager. It just felt very comforting to see the show being true to itself. My only disappointment is how it was mentioned Owosekun has experience with Luddite cultures, and yet her expertise is never really used when they encounter the people on the planet. 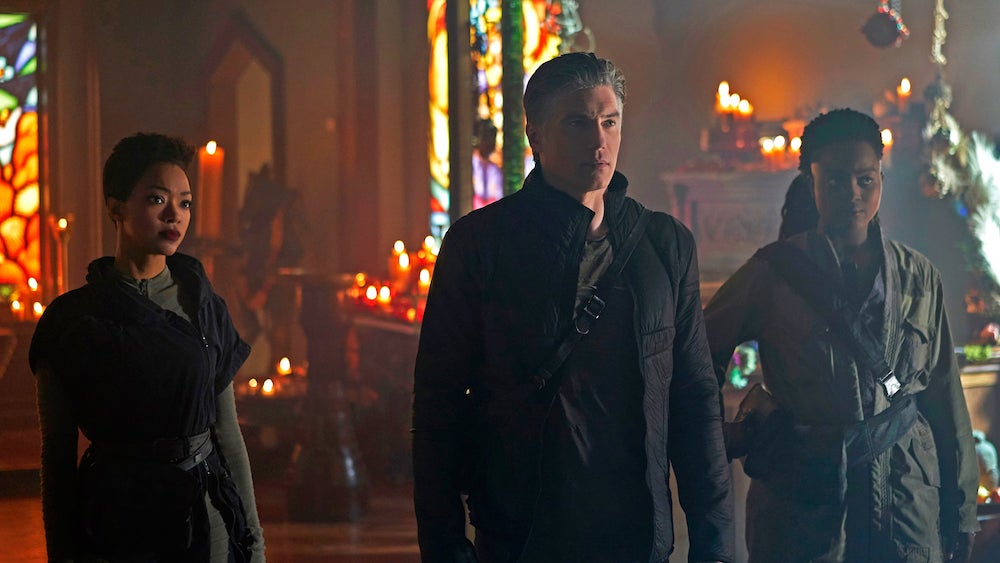 But that’s not to say it was just a throwback to old-school Trek, because there were some ambitious things happening in orbit with Saru (Doug Jones) having to find a way to prevent Terralisia suffering an apocalyptic event he can’t warn the away team about. This resulted in a magnificent plan from Tilly (Mary Wiseman), in collaboration with others, to jettison the dark matter asteroid they’ve been keeping in a cargo bay and have its immense gravity draw away the radioactive rocks from Terralisia’s ring formations—that was due to hit the atmosphere and create a nuclear winter. The VFX shots of the Discovery essentially dragging a giant “magnet” through the rocks, pushing them aside, was very nicely handled. But, more than anything, it was just great to see more of the intelligent thinking and teamwork on the Bridge that’s always typified good Star Trek. Some of the more “background characters” are even starting to feel like people now, although I’m still at a loss to name them easily.

Fundamentally, “New Eden” managed to turn the season’s big mystery into something I’m sufficiently intrigued by. The mystery isn’t just that seven unexplained “signals” have appeared across the galaxy, it’s now that one heralded the mass transportation of war-torn humans to a distant alien world. Why? And if the so-called “Red Angel” creature is responsible, what are its intentions? Considering the people of Terralisia arrived two centuries ago, it seems whatever is going on with the signals has been happening over great distances of both space and time. Burnham also clarified that Spock’s been investigating this mystery for decades since he was a child, so what has he discovered? It must have been something extraordinary, to make him voluntarily commit himself to a mental facility on a Starbase. It’s also very strange when the signal appeared, apparently hastening Discovery to Terralisia in order to rescue the people there from destruction—suggesting the Red Angel needed the crew’s help, so has limited influence on the physical world? 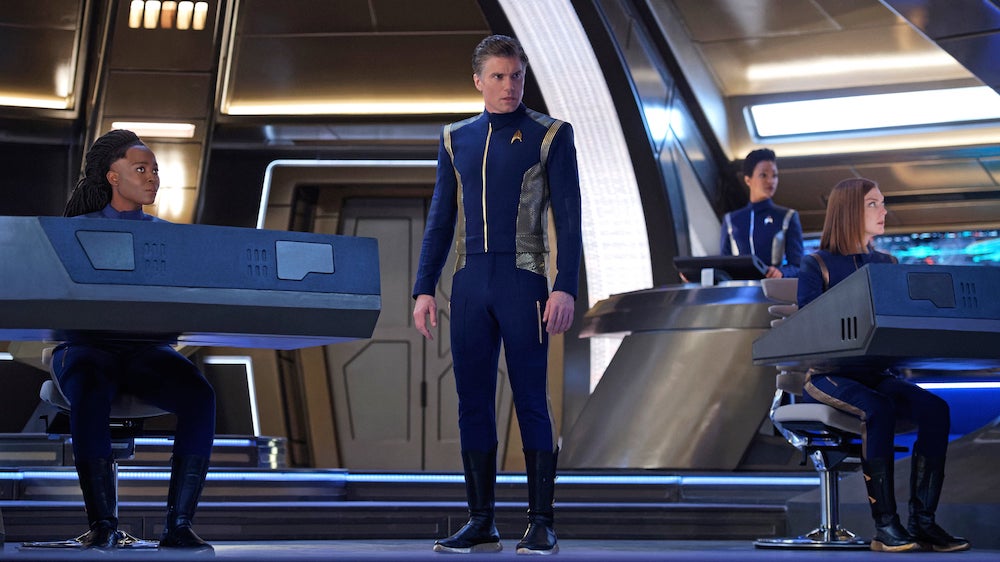 And I haven’t even touched on a parallel, perhaps unrelated, mystery introduced in “New Eden”. After Tilly injured herself trying to get a portal sample of dark matter rock, she woke up in Sickbay and met an apparently new member of the crew called Amy (Bahia Watson). There was definitely something a little “off” about Amy and her relentlessly upbeat attitude, there to give Tilly welcome encouragement. Eventually, Tilly realised Amy was a childhood friend she hasn’t seen for years, but the computer records say Amy is now deceased. Tilly has seen a ghost, but what’s really going on? Is it related to the dark matter rock she extracted? The bump on her head (unlikely)? Does Amy’s appearance tie into the “spore network” Stamets mentioned allowed him to see Dr Culber (who’s also dead)? Or is this in some way connected to the bigger mystery with the seven signals?

Overall, “New Eden” is just the kind of episode this season needed, and perhaps the series at large. It was refreshingly unashamed of doing things audiences expect from Star Trek (we even had discussion of the Prime Directive’s antecedent General Order One, about not interfering in pre-warp civilisations), and if season 2’s arc is going to result in another half-dozen away mission adventures with Captain Pike as Saru takes command of the Bridge, that’s a direction I can get behind.