Ricky Gervais has made Netflix his home. The streaming giant has become a godsend for UK comedians wanting to straddle both sides of the Atlantic, as it offers such global reach. Derek (2012–14), Gervais’s last sitcom on Channel 4, felt like it was kept alive through Netflix syndication, as it wasn’t as celebrated by British audiences but seemed to play better overseas—where there’s more tolerance for someone doing a broad caricature of a man with learning difficulties? After an atrocious stand-up special condemned for its transphobia, After Life offers less controversy and more familiarity. Indeed, it combines several of Gervais’s go-to settings and topics: a boring office and depressing retirement home, while offering an outlet for his acerbic stand-up material and musings on life and death.

After Life concerns Tony (Gervais), a journalist for ‘The Tambury Gazette’, who’s been widowed after the death of his wife Lisa (Kerry Godliman) from breast cancer. He channels his grief into selfishness and cynicism, saying and doing whatever he pleases because there’s nothing left to live for without his soulmate. Tony’s friends and workmates deflect his bitterness because they sympathise with his pain, but they eventually make him realise the error of his ways. Well, without making another series an impossibility. 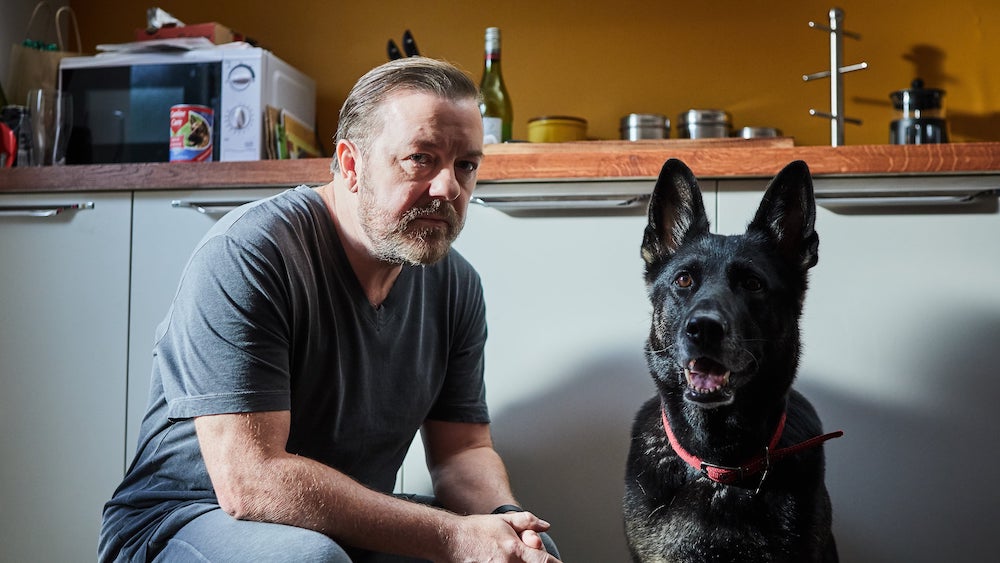 This sitcom is entirely the work of Gervais (again operating without his writing partner Stephen Merchant), and it suffers from similar problems that sunk Derek. It’s oppressively maudlin and has trouble balancing the whimsical comedy with being a life-affirming drama with cynical barbs. This leads to a tonal mishmash because After Life is sweet and thoughtful one moment, but then there’s a jolt of something sour and distasteful. It looks like perfect Sunday afternoon viewing with location shooting around sunny Hemel Hempstead, but then people drop the c-bomb and the story takes some tough directions. One minute we’re giggling at local press hijinks with babies dressed like Adolf Hitler, or wall stains resembling Kenneth Branagh (comedy material one could imagine from The Vicar of Dibley, perhaps), then the next minute a junkie’s dying of an overdose inside a garage on a dirty mattress.

Gervais clearly has “big things” he wants to communicate about life and death, but his ambition isn’t matched by his abilities. Derek and After Life feel like a pre-therapy session for Gervais, or a way he can dispense “wisdom” that amounts to a variation of “do unto others as you would have them do unto you”. Many scenes screech to a halt, so a character like dull co-worker Kath (Diane Morgan) can feed Tony lines that enable Gervais to recycle material from his chat show appearances. His favourite topic being atheism, which inevitably gets a lot of airtime given the subject matter. 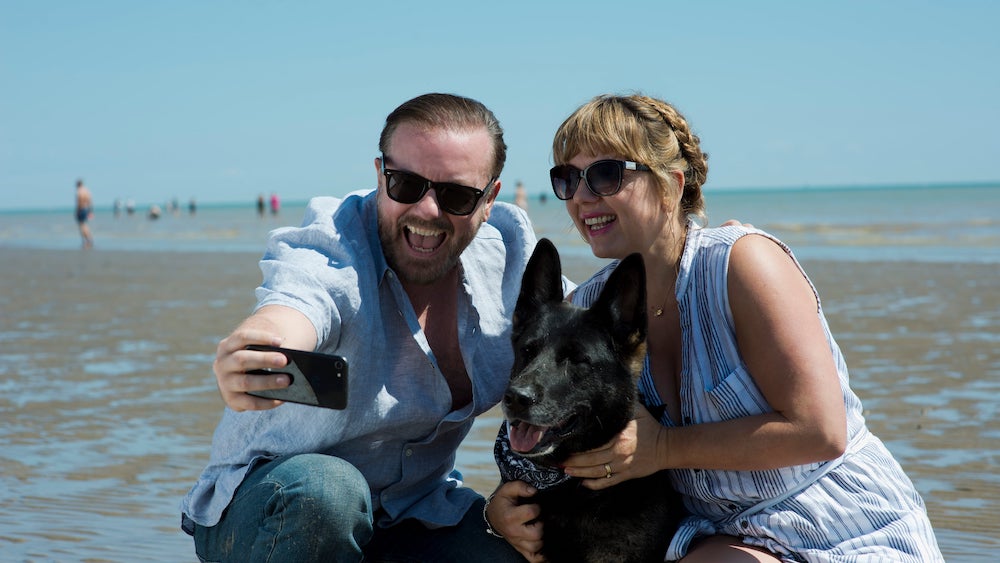 In many ways, Tony is Gervais (they both even wear black T-shirts), so perhaps After Life is a big thought exercise for Gervais about how he’d cope if he wasn’t famous and lost his own girlfriend. Common advice for writers is ‘write what you know’, but because Gervais’s life now has the trappings of fame he’s pushed to focus on things everyone can relate to - death and the grieving process. It just seems that Gervais’s notion of “reality” has got stuck in a pseudo-fantasy realm of perfect village summers, but with a bit of grit to prevent things turning into Last of the Summer Wine (1973–2010). I say “grit”, but here that amounts to cliches like the ‘prostitute-with-a-heart-of-gold’.

There are amusing moments and it’s easy to binge the six half-hours, but it Tony’s character and redemption arc never connected strongly enough. I’m not even sure I like him. He starts off being a grouchy bastard one excuses because of his terrible loss, then he becomes less crabby once people start calling him out on his attitude problem, to ultimately make amends to the villagers he’s been upsetting lately. I just had difficulty accepting Tony as someone deserving of redemption, as the moments we see him with his late wife (recorded on videos he watches in bed) mark him out as an intensely annoying practical joker and little more. Maybe Lisa was his soulmate because she was the only person who’d put up with his childish behaviour, as once she died this middle-aged man was reduced to drinking canned food and paying a sex worker £50 to do his washing up. The show might have worked better if there was a way to see what Tony was like generally, to everyone, before Lisa died. But I don’t think Gervais knows how to write an alter-ego of himself that is well-balanced and a nice person, or finds no humour in that. Better to show Tony wasn’t always such a bad person because he tormented his amazingly thickskinned wife a lot? 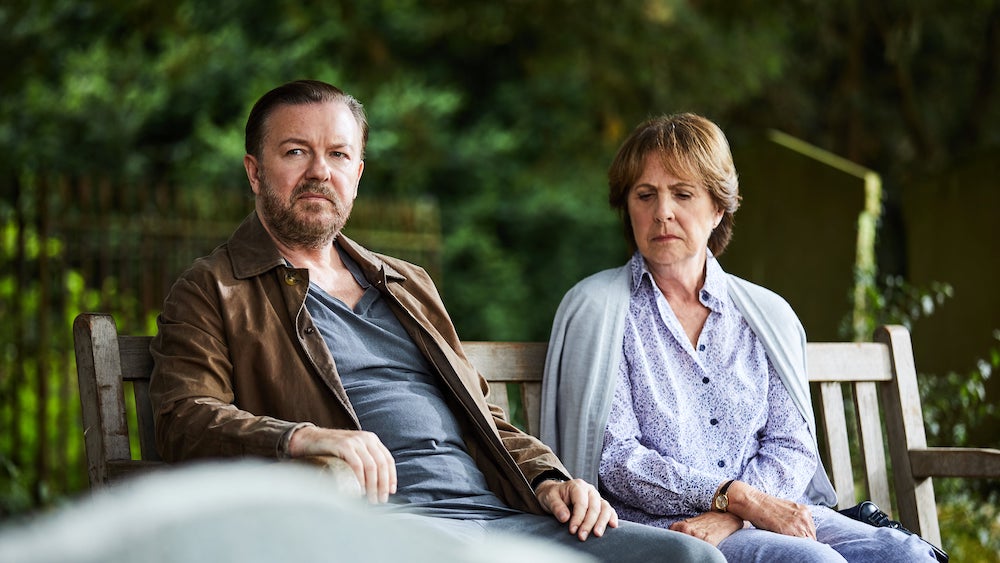 There are some good actors milling about After Life, which helps. Godliman (Derek) is excellent as his dead wife, despite only really being in very brief scenes that don’t involve the other actors. Tony Way is amusing as Tony’s slobby fellow journo Lenny; David Bradley (Game of Thrones) appears as Tony’s senile father, who gets the most touching moment when the mist of dementia parts and he recognises Tony as his son; the sublime Penelope Wilton (Downton Abbey) elevates every one of her scenes with a touching performance as a fellow widower Tony talks to at a graveyard; Roisin Conaty is a big surprise, giving a likeable performance as prostitute Roxy/Daphne; I got a few giggles from Paul Kaye (Game of Thrones) as Tony’s totally disinterested psychiatrist; Joe Wilkinson is “Postman” Pat; and Tom Basden gives the most down-to-earth performance as Tony’s boss and brother-in-law, who starts off being a doormat but starts to show Tony some tough love. There’s even a small role for David Earl (Derek) as another bearded weirdo, this one seemingly Earl’s own comedy character, Brian Gittins, parachuted into one episode about a hoarder.

After Life is still the best thing Gervais has made since Extras (2005–07), which is the good news. It has funny moments and wears its heart on its sleeve, but the shifts in tone can be awkward and Tony’s character is little more than a mouthpiece for Gervais to expound the virtues of atheism and say shocking things. The synopsis for the show talks of how Tony uses his loss as a way to say what he wants because he doesn’t give a shit, treating his gloves-off mentality like a “superpower”, but none of that comes across. He’s someone we never actually knew before his wife died, who opts to forego social decency to abuse his friend’s saintly tolerance for his sad situation. It’s made all the more awkward when we realise Tony’s boss is also his brother-in-law, as that man lost his sister and is probably hurting just as much as Tony? And yet he’s not being a self-involved dick about it.