The long wait is over. Game of Thrones is back for a six-part farewell season after 20 long months off-air. And, as is customary for many of the HBO show’s premieres, “Winterfell” didn’t offer enormous spectacle with jaw-dropping twists. But it was nevertheless surprisingly eventful and even rather humorous. The story reminded us where things stand between everyone, moved a few pieces around the Westerosi map, and primed us for bigger events to come… 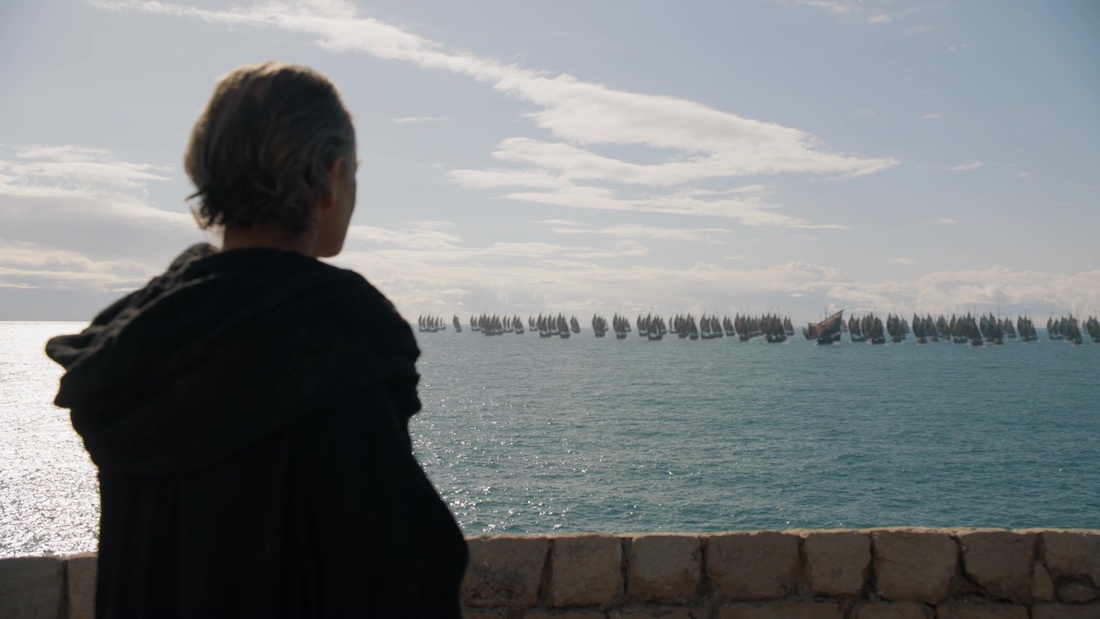 Everyone’s anticipating a spectacular battle in the north once the Night King and his White Walkers reach the heavily fortified Winterfell, but less clear is what Queen Cersei’s (Lena Headey) long game is. She may have promised Lannister soldiers to help in the fight against the undead, but here we saw the arrival of the Golden Company, a formidable foreign army commanded by Harry Strickland (Overlord’s Marc Rissmann). My guess is the Golden Company have been hired to mop up whatever’s left of the battle against the Night King, hence Cersei’s quiet delight when Qyburn (Anton Lesser) informed her the White Walkers have breached the Wall. She wants her enemies to tear themselves apart, so she can clean up afterwards. Strickland might not have brought those elephants Cersei’s heart was set on, but with two-thousand horses and Euron Greyjoy’s (Pilou Asbæk) Iron Fleet at her disposal, Cersei has quickly amassed a sizeable powerbase in the south for whatever she’s planning…

Quite how long Euron will last is anyone’s guess, as he’s determined to have Cersei honour her agreement to bear him a prince in exchange for his help. For now, Cersei has to accept this vile man’s arrogance and sleep with him to ensure his obedience, but she’s done far worse to get what she wants in life. It’s almost inevitable Euron will get his comeuppance the moment Cersei’s squeezed him dry of usefulness, probably with the Mountain (Hafþór Júlíus Björnsson) literally squeezing his brains out through his eyeballs.

One of the premiere’s more unexpected developments belonged to Bronn (Jerome Flynn), who’s basking into his reputation as the first man to shoot a dragon for centuries, and sleeping with young prostitutes who won’t tire of his boasting. Unfortunately, Qyburn appears like a bad smell to ruin Bronn’s bedroom fun, with a secret mission from Cersei that’ll guarantee him a vast fortune: use her dead son Joffrey’s crossbow to assassinate her turncoat brothers, Jaime (Nikolaj Coster-Waldau) and Tyrion (Peter Dinklage). The latter of whom used the same crossbow to murder their rancorous father, Tywin. This offer puts weight on Bronn’s shoulders, and it should be interesting to see what he chooses to do. Tyrion and Jaime are his closest friends, but Bronn is characteristically greedy and it’s a running joke he’ll do almost anything for fame and money. That said, I’m not expecting Bronn to kill either man because he seems too honourable, although it would be interesting if one of the Lannister siblings met their demise this way. 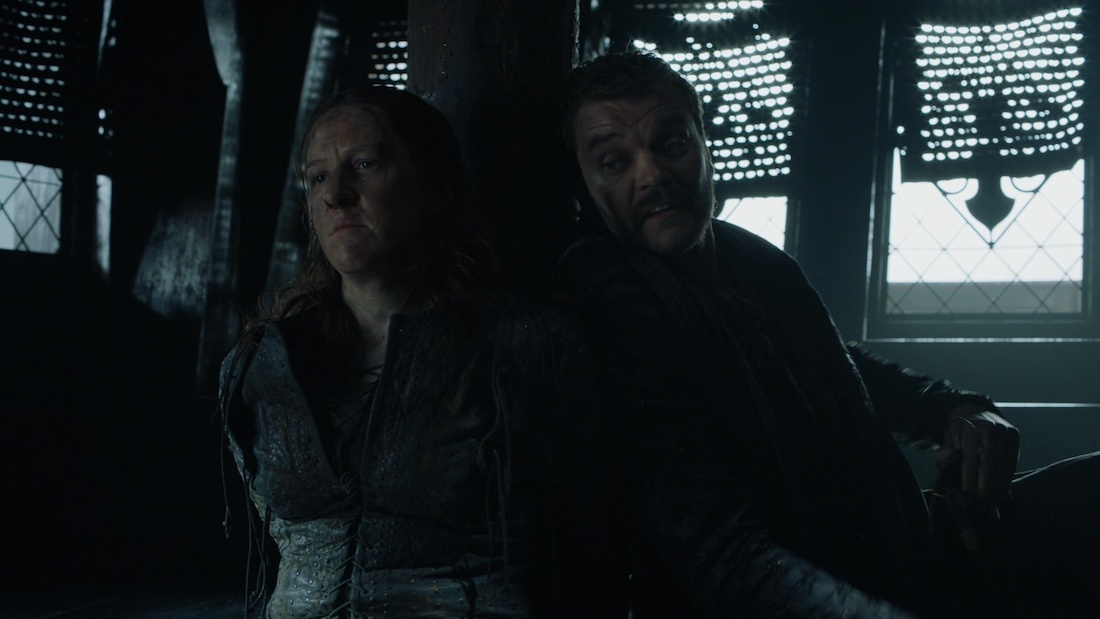 Unbeknownst to Euron, some of his plans are already falling apart. He was so horny about sleeping with Cersei he wasn’t around to ensure his prisoner, niece Yara Greyjoy (Gemma Whelan), didn’t escape from his ship. Theon (Alfie Allen) hopped aboard with some men to rescue his sister—who headbutted him for getting her into this mess in the first place, before extending a hand to help him up. The Greyjoy siblings are back on a high (which hopefully won’t be rudely interrupted again), with Yara planning to retake the Iron Islands while their uncle is distracted in King’s Landing. Although she kindly allows her brother to follow his heart and head to Winterfell to help their family’s historical friends the Stark’s against the undead horde. 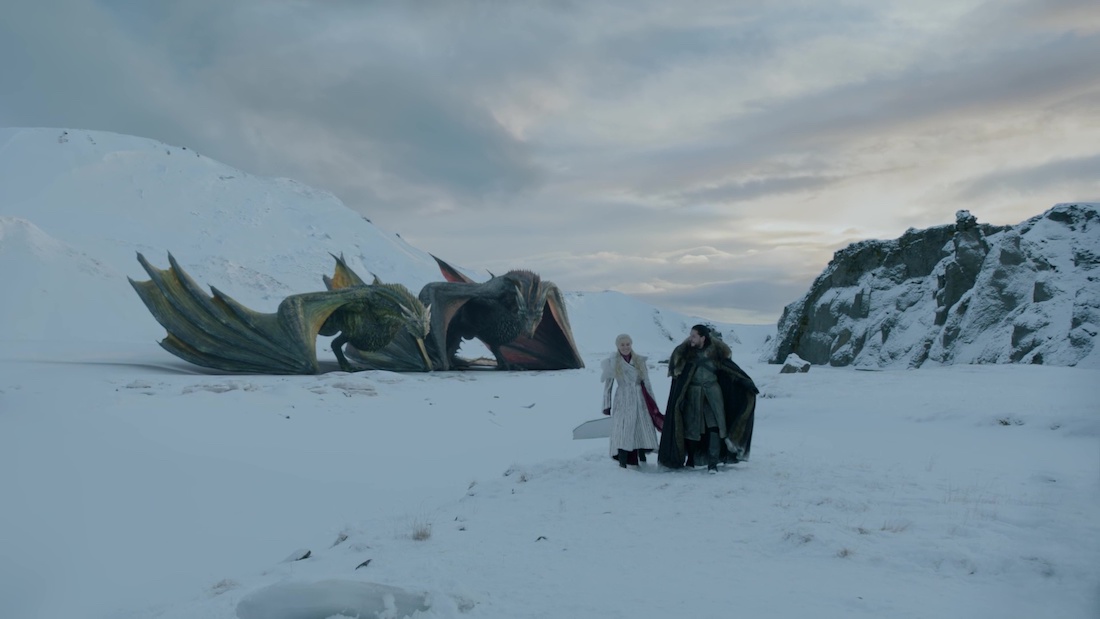 Given the title, it was no surprise the majority of this hour took place in and around Winterfell, the Stark family stronghold. There were also many nods to Game of Thrones’ first episode, “Winter is Coming”, when Winterfell played host to a royal visit by King Baratheon and Queen Cersei. Only now it’s Queen Daenerys Targaryen (Emilia Clarke) setting foot inside Winterfell but, unlike King Robert, she’s a stranger and distrusted by the northerners. Sansa Stark (Sophie Turner) eyes her brother’s new girlfriend with cold suspicion, and it seems the Northern lords are likewise unsure this glamorous ‘Mother of Dragons’ is the saviour Jon Snow (Kit Harington) claims. They’re rightly disgruntled Jon relinquished his crown as their ‘King in the North’, and so quickly swore fealty to a woman from a rival House whose dragons could raize Winterfell to the ground.

There were a lot of fun reunions during this episode, too: Jon and Arya (Maisie Williams), who got on the best as children, compared swords in adulthood, with her admission she’s used Needle “one or twice” confirming to her big brother she’s not the little girl he once knew; the Hound (Rory McCann) had typically blunt words for “cold little bitch” Arya, who left him to die on a hill a few seasons ago; Tyrion reminisced with Sansa about the “miserable affair” of her wedding to Joffrey; and in the final moments a hooded Jaime arrived at Winterfell and locked eyes with wheelchair-bound Bran Stark (Isaac Hempstead Wright), the little boy he crippled by pushing him out of a tower window in the first episode. Doesn’t that seem like a very long time ago now? 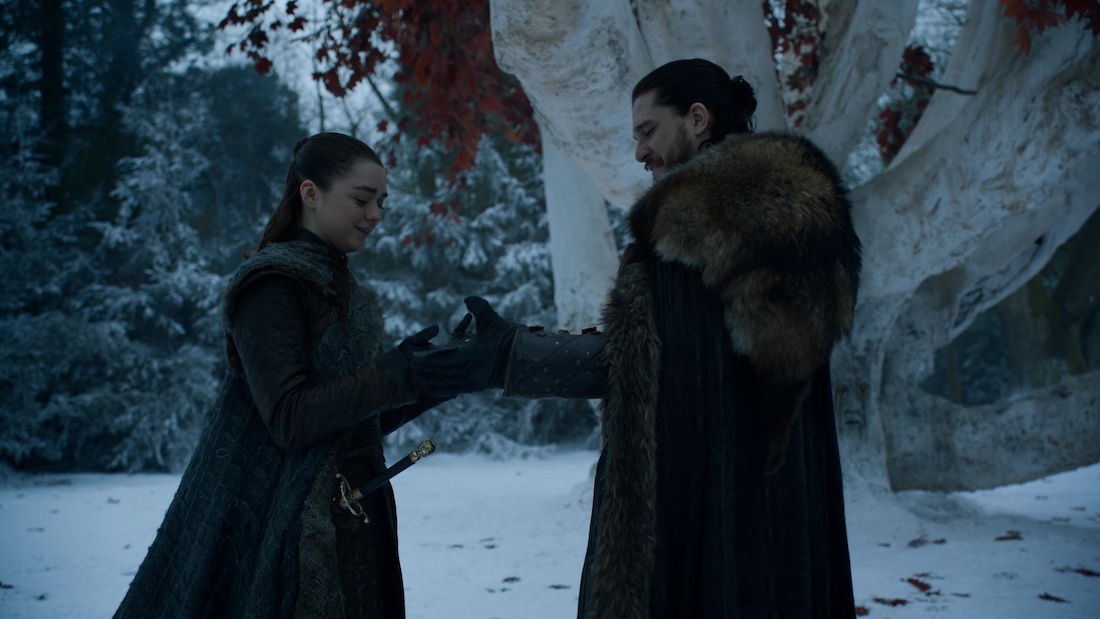 In an episode that was relatively low-key, the one instance of the series flexing its VFX muscles was when Dany and Jon went on a “date” with dragons. It’s been speculated for a very long time that Jon should also be able to ride a dragon (as there’s Targaryen blood in his veins), and this proved correct when they both took to the cold skies on their scaly beasts. Jon had better get some dragon-riding practice in while he can, as that skills will definitely be required when the Night King arrives atop his own ice dragon.

I’m not sure it’s common knowledge amongst ordinary folk that only Targaryens can ride dragons, but neither Jon or Dany seemed surprised it was possible. Maybe that’s more of a “book thing” the TV show hasn’t brought up directly, as it does seem strange dragons are picky over who sits on them.

However, Jon’s heritage was returned to directly later on, under the gaze of past Stark’s in statue form in the Winterfell crypt, when Sam (John Bradley) revealed he’s the son of Rhaegar Targaryen and Lyanna Star, which makes him the rightful heir to the Iron Throne. Jon’s reaction was astonishment and mild anger that his father (well, uncle) Ned Stark hid the truth from him, but the bigger issue is that he’s slept with Dany and it probably won’t take him too long to work out she’s his aunt. 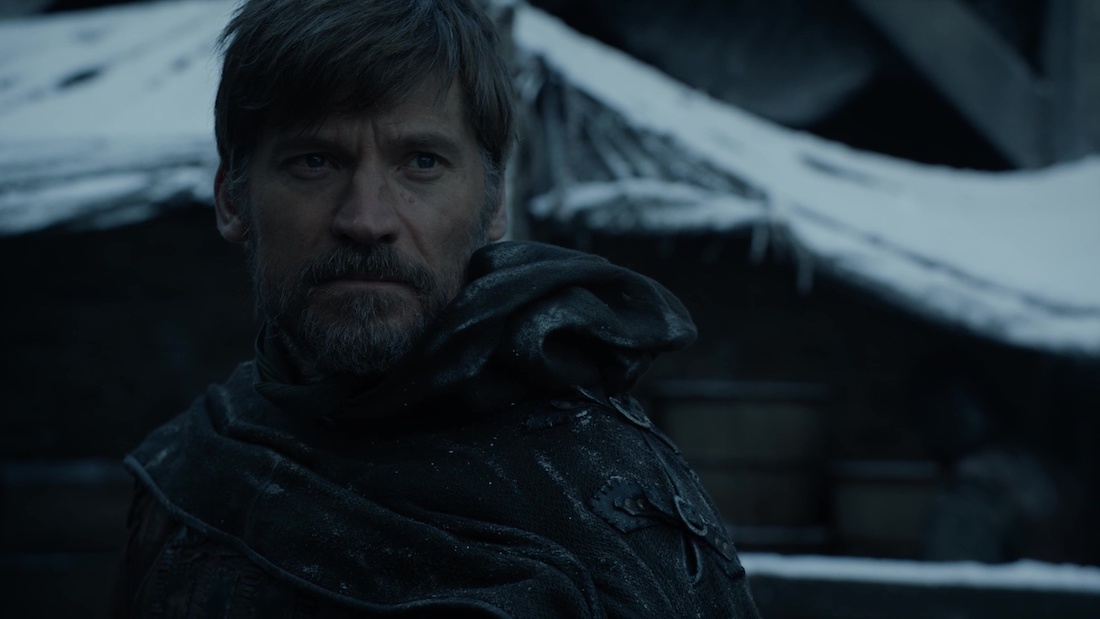 Is his true parentage a secret Jon will maintain, knowing the truth will deny him a sexual relationship with Dany? Targaryens have a history of being relaxed about incest, but somehow I doubt Jon is going to overlook it. It’s also a lot easier when someone else is expected to be the people’s saviour, whereas making it known he’s The King will put a lot of responsibility back on his shoulders. He was already uncomfortable being King of the North, never mind King of the Seven Kingdoms. And how would Dany take this news her birthright for the Iron Throne’s been usurped by a direct male heir, considering a lot of her internal strength has come from how she’s railed against the patriarchy? Would she reverently assume a lesser role, bending the knee to “her king”, a man, just because it’s lovely Jon? Is there perhaps a third way through this mess, of them sharing power equally as husband and wife? These are all questions for another day, but interesting to speculate about for now…

And there continue to be allusions to Dany not being the golden girl she’s often made out to be, which I picked up on. Her style of rule has often been criticised by her aides, and now Sam knows she murdered his father and brother with her dragons after they failed to get in line. It’s understandable for Sam to take against Dany after receiving that news, which is what prompted him to let his best friend Jon know his bloodline trumps Dany’s… but with quite a few other characters being hesitant to accept Dany’s rule, I’m wondering if season 8’s going to take things down an interesting path. Maybe Dany will be vital in defeating the White Walkers with her Unsullied, Dothraki riders, and firebreathing dragons, but things will get ugly when her attention turns to the Iron Throne and Jon’s sense of birthright kicks in. 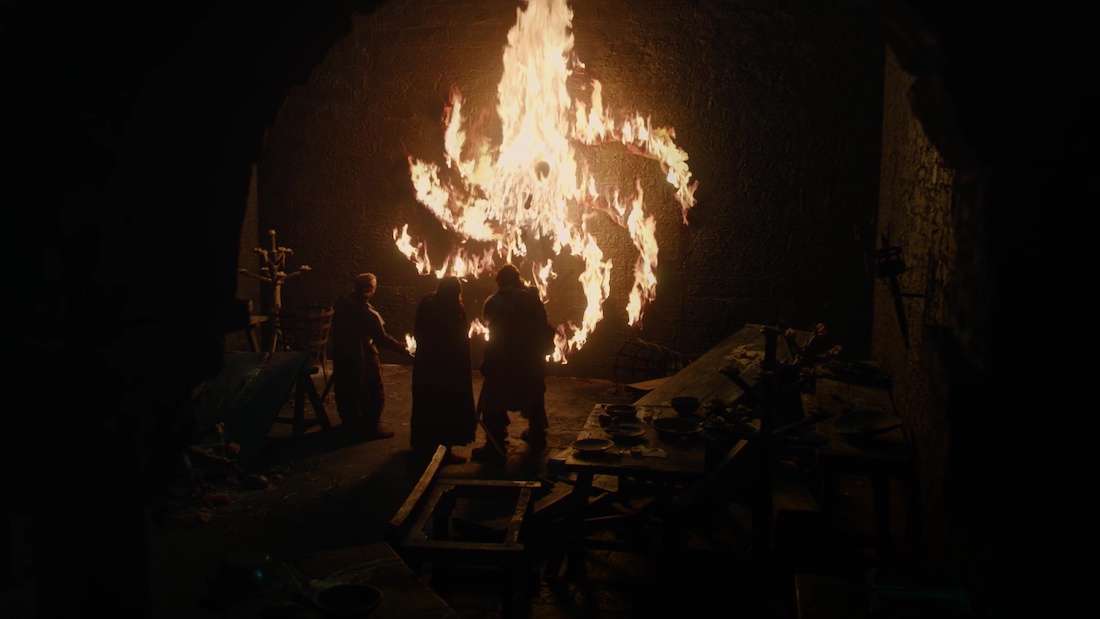 The Night King and his army didn’t make an appearance, but their presence was felt in the final moments with Tormund (Kristofer Hivju) and Beric Dondarrion (Richard Dormer) arriving at the empty Last Hearth, the seat of House Umber. They found Lord Ned Umber dead and nailed to a wall decorated with limbs arranged in a familiar spiral pattern; the Night King’s own twisted “sigil”. This short sequence was a meeting of battle-scarred survivors, with Tormund and Beric fresh from Eastwatch, here finding Dolorous Edd (Ben Crompton) and some Night Watch evacuees from Castle Black. 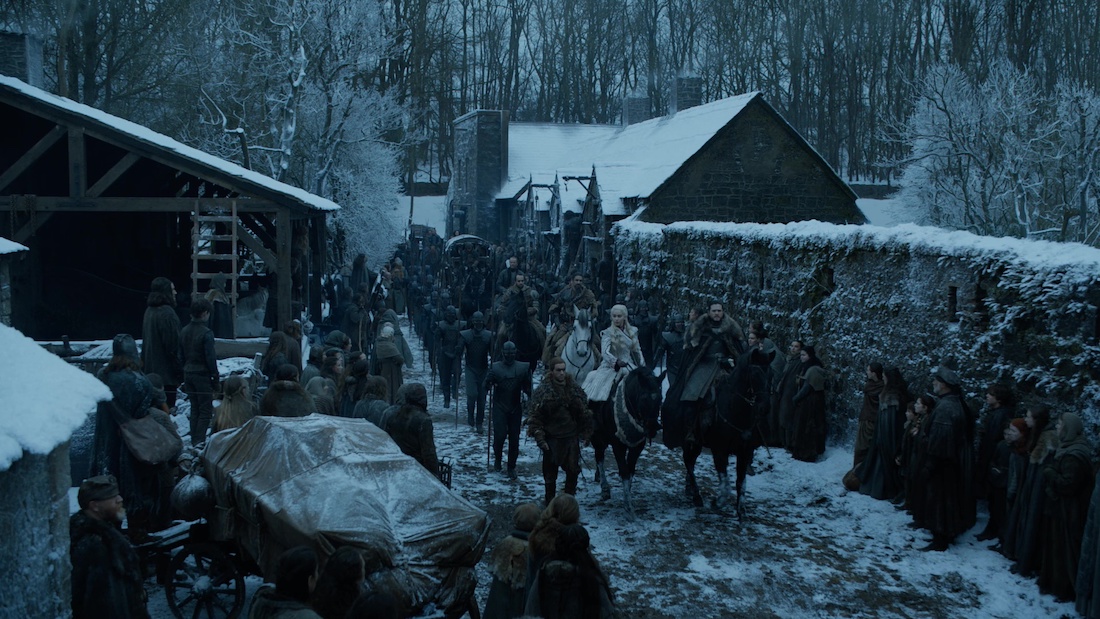 I’m sure Game of Thrones has plenty of surprises up its sleeve, and “Winterfell” did a good job reminding you of the minutiae of the story and the tangled relationships of its characters. The full-on fantasy action’s always great fun when it arrives, but the show has always benefitted the most from our attachment to these people. We’re so aware of their goals, desires, secrets, loves, resentments, regrets, betrayals, and loyalties… that they give power and meaning to the big showstopping moments the show wisely drip-feeds us.