In the latest adaptation of Mike Mignola’s comic-book series Hellboy, British director Neil Marshall (Doomsday) and Mignola himself promise a version of the character closer to the demonic anti-hero from the source material. Unlike traditional comic-books, the Hellboy stories are inspired by the pulp magazines of the 1950s and offer endless references to world history and folklore. Mignola took inspiration from Swamp Thing illustrator Bernie Wrightson and found his footing in the industry by drawing monsters and writing spooky tales. Then, in 1993, Mignola drew a demonic sketch on a pamphlet for a comic-book convention and the creature known as Hellboy was borcn…

The first Hellboy (2004) movie was directed by Guillermo del Toro (Pan’s Labyrinth) and, a decade later, remains a fantastic adaptation. It was macabre and fiendish, dripping with diabolical inspirations but still containing the humour and heart of Mignola’s work. An even better sequel followed, Hellboy: The Golden Army (2008), right before the comic-book genre became the multi-billion dollar business it is today. 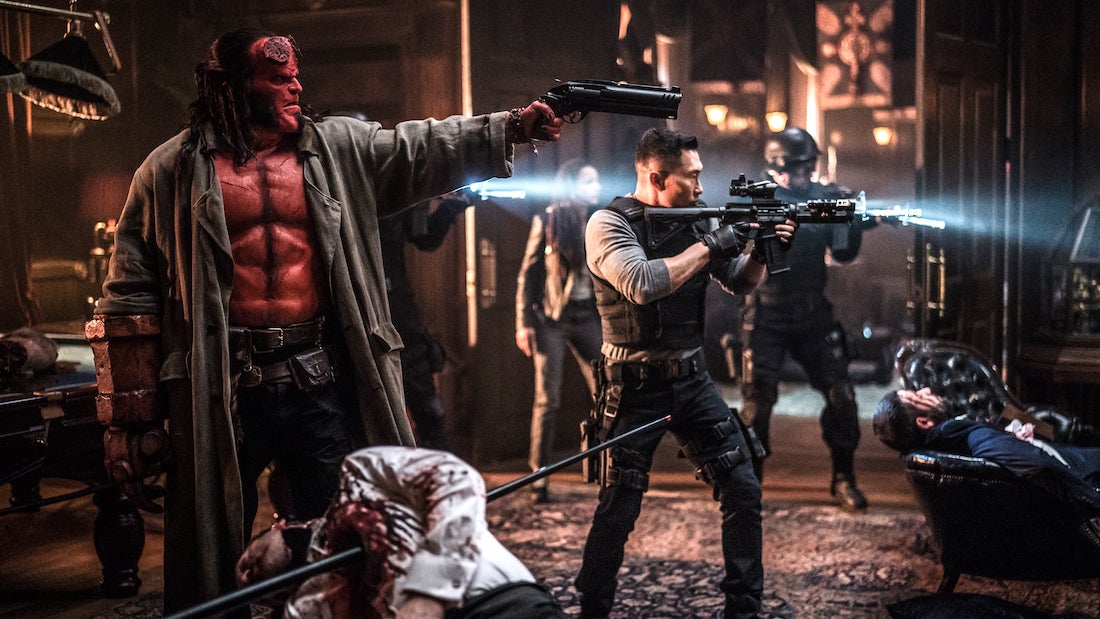 The first Hellboy was only moderately successful, grossing $100M on a budget of $66M. The Golden Army fared slightly better, making $160M from a budget of $85M, and ended on an emotional cliffhanger poised to take the character down a path never imagined—fatherhood. It’s safe to say fans were eager to see del Toro conclude his trilogy. However, due to becoming preoccupied with several other projects, from The Hobbit: An Unexpected Journey (2012) to an adaptation of H.P Lovecraft’s “At the Mountains of Madness”, hopes for Hellboy 3 fizzled away. Until now, but 2019’s Hellboy comes from a completely different creative team and is essentially a soft-reboot with a new cast…

In the Dark Ages, evil Nimue ‘The Blood Queen’ (Milla Jovovich) attempts to conquer humanity with an army of monsters and a terrible plague. She’s stopped by the legendary King Arthur, who dismembers the sorceress’s body and hides the pieces in locked caskets across Britain. Centuries later in the present day, Hellboy (David Harbour), the literal ‘Beast of the Apocalypse’ summoned by Nazis during WWII, then rescued and adopted by Professor Broom (Ian McShane), is working for the Bureau for Paranormal Research and Defense (BPRD).

There’s a prophecy of a forthcoming apocalypse, and while some believe Hellboy himself will inevitably be responsible for the End Times, it becomes clear The Blood Queen is being resurrected. To stop her, Hellboy receives help from his friend Alice (Sasha Lane), a psychic he’s known since he was a child, and a British agent called Ben (Daniel Dae Kim) who detests all monsters. 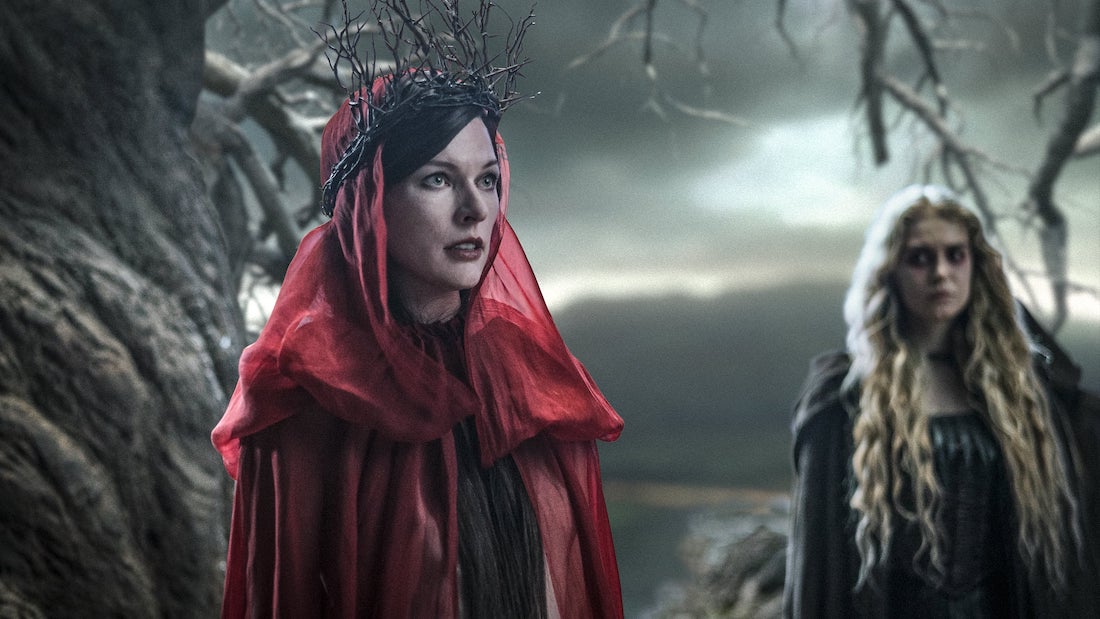 It’s hard to redefine Hellboy after Ron Perlman’s (Alien: Resurrection) iconic performance, but Harbour (Stranger Things) does a decent job of making the character his own. he crafts his own take on Hellboy while retaining the everyman humour of Perlman’s approach. Harbour shines most whenever he’s engaging with others and certainly keeps one’s attention whenever he’s on screen. However, no matter how appropriately square-jawed Harbour is, he can’t replicate the innate charisma and offbeat charm that made Perlman’s performance so appealing.

McShane (John Wick: Chapter 2) makes for a solid successor to John Hurt as Hellboy’s human father. He manages to bring a lot of comedy to his performance, cracking wise whenever he can. However, McShane and Harbour fatally lack any chemistry together as father and son. Several of their emotional moments consequently feel very empty.

Similarly disappointing is Milla Jovovich (Resident Evil: The Final Chapter), who usually shines amongst large ensembles and can make the most of bad material. However, Nimue is sorely undeveloped and gives her little to work with. The script handicaps her performance and the actress can’t find any depths to her villain, so Nimue becomes little more than a Final Boss to defeat at the end of the story. 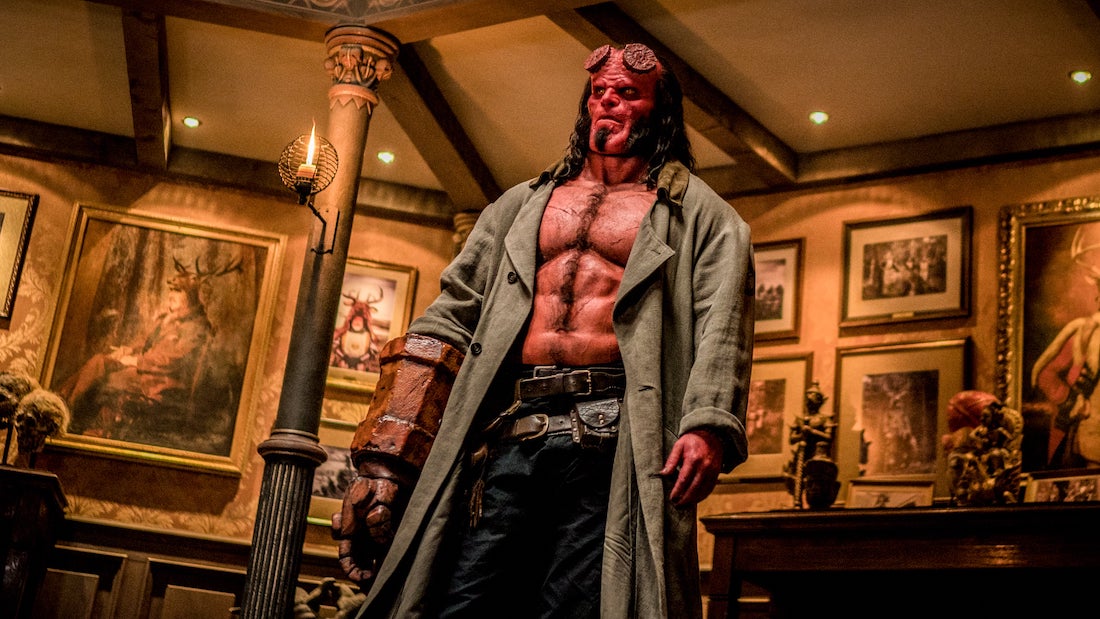 Neither of Hellboy’s previous sidekicks—fish-man Abe Sapien or firestarter Liz Sherman—appear in this reboot, despite being key players in the comic-books. However, we do have breakout star Sasha Lane (American Honey) and TV stalwart Daniel Dae Kim (Lost). The highlight of this new Hellboy is the chemistry between Lane and Harbour, as their quips help deliver several very funny moments. When she reveals her superpower, the VFX is so profoundly gross it’s reminiscent of the body horror from John Carpenter’s The Thing (1982)! The same goes for Kim’s straightforward BPRD agent character Ben Daimi, who’s constantly butting heads with Hellboy and get some amusing one-liners.

Clearly, the film’s focus was on the production design and visuals. Neil Marshall employs an array of creature VFX and gratuitous gore that’ll satisfy bloodthirsty genre fans. Del Toro’s interpretations were confined by the 12-rating, but Marshall gets to spray the walls in buckets of blood. From a vampire being impaled on a post in a wrestling ring, to Londoners literally being torn in half with guts splattering everywhere, Marshall pushes the film’s 15-certificate to breaking point. This is definitely not for the squeamish. However, some of the CGI is very lacklustre. A fight sequence involving three trolls against Hellboy begs the question if the VFX team used an old PlayStation 2 to render the graphics. 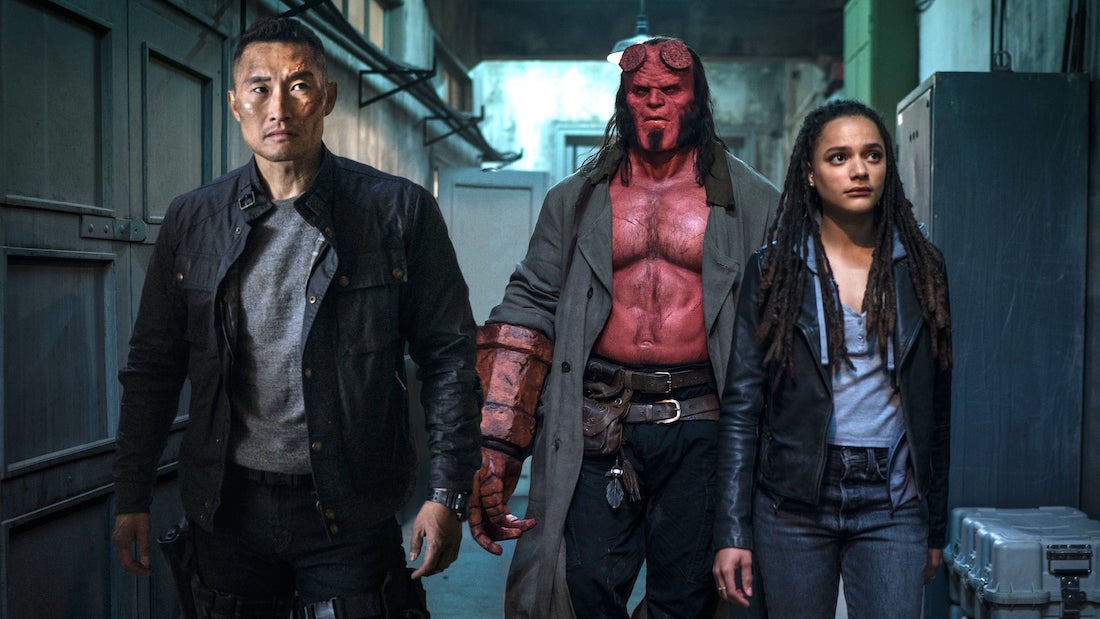 The gore and f-bombs eventually become tiresome and juvenile, but Marshall’s experience with horror results in some very unnerving moments. Any moment featuring the creepy Baba Yaga is an undoubted highlight. In Russian folklore, Bob Yaga is a supernatural being that dwells deep in the forests and eats children. Marshall handles the material well; particularly a scene when Hellboy sits down in her home for human stew, with the director leaving it to audiences to decide what meat is left to be picked from the small bones. However, the character is designed and performed in such a brilliant and twisted way by Troy James (The Void) that the Baba Yaga’s sure to make your skin crawl. All of the makeup by Oscar-winner Joel Harlow (Pirates of the Caribbean) is impressively handled, with Harbour’s Hellboy looking incredible. You never doubt its reality for a second. The giant man-warthog Gruagach (Stephen Graham) is also great fun, reminding me of Bebop from Teenage Mutant Ninja Turtles: Out of the Shadows (2016).

During production, there were reports of behind-the-scenes turmoil and that Hellboy was suffering from onset clashes. There was a sudden change of cinematographer and the producers ultimately locked Neil Marshall out of the editing room. The director is conspicuously absent from the Hellboy press tour. Knowing these difficulties, it clearly affected how the film turned out. The narrative rarely flows and the plot jumps around from one place to another, lacking an overall sense of structure. The editing is also too choppy and yet the story remains sluggish. It’s clear that Lionsgate wanted to start a new franchise with an edgier take on Hellboy but, unfortunately, they’ve failed to make a decent first instalment. Writer Andrew Cosby (TV’s A Town Called Eureka) compressed several smaller stories from the comic-books into one script and the result is an overpopulated narrative. There are just too many subplots and flashbacks involving Nazis, witches, and secret societies.

Comparing this to del Toro’s Hellboy is like comparing apples to oranges. One is directed by an Academy Award-winning visionary, the other by a cult horror director who’s been dealing with TV more recently with Game of Thrones. Marshall delivers the weird and brutal violence he was hired to, but the script fails to match it. The lack of much chemistry between the key players, together with the shoddy VFX work, hammers the final nails into the coffin. As a huge fan of del Toro, Hellboy admittedly had a high bar to jump, but it barely gets off the ground. There are glints of potential, but things didn’t come together during production. It doesn’t hold a candle to the previous Hellboy films and is this year’s Van Helsing (2004).