A considerable number of theories were spun about how Sherlock writers Steven Moffat and Mark Gatiss would transplant their very postmodern take on Sherlock Holmes (Benedict Cumberbatch) and John Watson (Martin Freeman) to the Victorian era. If you were au fait with the show then it was fairly easy to predict that any story set in Sir Arthur Conan Doyle’s own milieu would neither be the result of time travel, nor a revelation the current incarnation of Holmes and Watson are descendants of his sleuths. As they’re both firmly of the present day and time travel is not yet as common as catching the bus, that just left Holmes’s ubiquitous ‘mind palace’ and the Victorian escapade as a subconscious realm to play with.

With this already reasoned out, it came as a bit of a surprise when “The Abominable Bride” deigned not to be some self contained flight of fancy but a proper continuation of Series 3’s finale. The pre-titles sequence flashes back to Holmes and Watson’s first meeting in 2010; offering highlights of their adventures thus far through to his exile at the end of “His Last Vow” in 2014. There, Mycroft Holmes (Mark Gatiss) arranged for Sherlock’s assignment to Eastern Europe rather than have him stand trial in the UK for the murder of blackmailer Charles Augustus Magnussen (Lars Mikkelson). After Holmes’s plane took off, he’s then recalled to tackle Moriarty’s apparent return as his adversary’s “Did you miss me?” video message was broadcast across the nation. 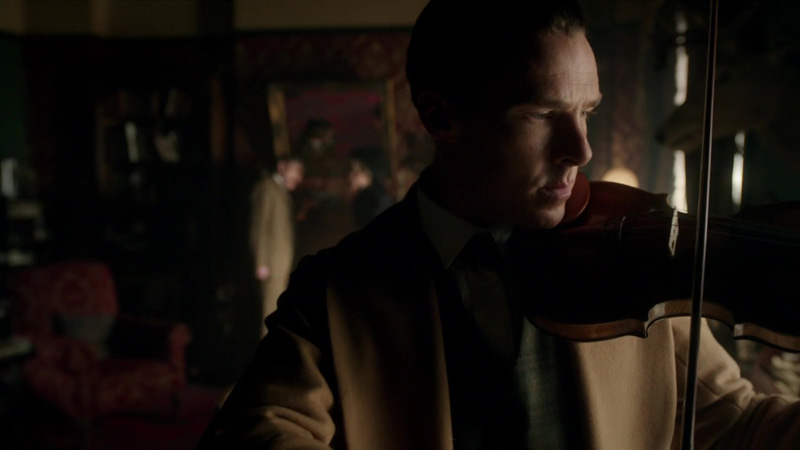 This is no throwaway ‘story so far’ sequence, and the various moments it chooses to replay do have a bearing on the ‘alternatively’ flashing up on screen as the years roll back to the 19th-century and the Second Anglo-Afghan War where John Watson’s invalided out of the fighting. As per the opening of “A Study in Scarlet”, Freeman’s voice-over covers Watson’s return to London— “that great cesspool into which all the loungers and idlers of the Empire are irresistibly drained.” His former Barts colleague Stamford (David Nellist, reprising the role he played in the opening Sherlock instalment “A Study in Pink”) introduces Watson to Holmes. From here, we get a reprise of key moments from the present day that provides the template for what follows.

The only difference is that we’re in a Gothic world of tweeds, repressed women, gas lamps, cabbies, and London fog. “The Abominable Bride” is blessed with beautiful period production design, lighting, and costumes. These elements are handled strikingly by director Douglas Mackinnon, who transfers many of the specific modern visual elements of Sherlock to the Victorian mise-en-scène. Thus, we get swooping, circling camera moves, rapid wipes and dissolves, graphics of telegrams appearing on screen, and Holmes meditating over his evidence and seemingly plucking various papers and clippings out of the air to clarify and arrange his thoughts. 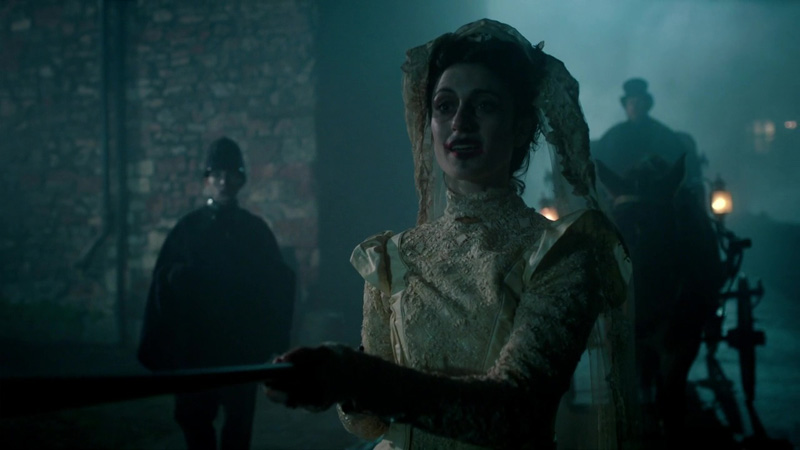 As a self-homage to Sherlock’s style it works very well. However, when familiar characters such as Stamford, forensic scientist Anderson (Jonathan Aris), landlady Mrs Hudson (Una Stubbs), John’s wife Mary Watson (Amanda Abbington), Inspector Lestrade (Rupert Graves), and pathologist Molly Hooper (Louise Brealey) appear, the narrative becomes ever more self-reflexive, allowing them to comment on their own incarnations in Watson’s Strand Magazine detective stories, or point out the relegation of female characters to the margins of detective fiction in the Victorian era.

Mrs Hudson reminds us that throughout Watson’s (and by extension Conan Doyle’s) stories she never says anything, just shows people up the stairs, and always seems to be serving breakfasts or making tea. “I’m your landlady, not a plot device,” she rails. Holmes merely observes this as “a distressing trend in the modern landlady.” When Watson grows a moustache so people can recognise him from the Sydney Paget illustrations (later beautifully recreated during the train journey in the episode), it indicates that Moffat and Gatiss are being self-indulgent from the outset, spinning a period fan-fiction variation of their postmodernist series. 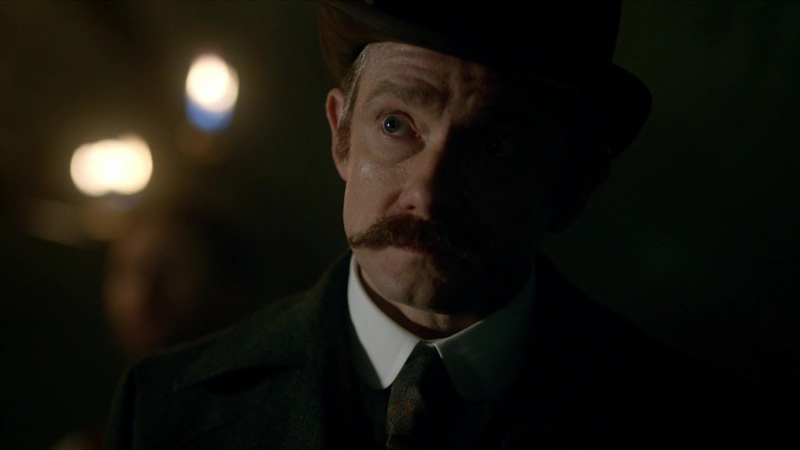 If you can accept this, there’s a lot of fun to be had as they wittily reference previous cases or subvert their modern iterations of the main characters to suit the period. Holmes points out “I’m hardly in the dog one” when referring to Watson’s version of “The Hound of the Baskervilles”. For their own Victorian ghostly murder-mystery, they pick up on the “full account of Ricoletti of the club-foot, and his abominable wife” briefly mentioned in the opening of “The Musgrave Ritual.” To best his smarter brother Mycroft, Holmes gets to grips with astronomical theory and “the obliquity of the ecliptic” as mentioned in “The Greek Interpreter”.

The detective story is in the main atmospheric and thrilling as Holmes tracks down the murderous, consumptive bride Emelia Ricoletti (Natasha O’Keeffe) who, having shot her own brains out, returns from the dead to kill her husband Thomas in Limehouse. Lestrade’s description of her initial felony is accompanied by more of Mackinnon’s striking visuals as the interior of 221B appears within the crime scenes and Holmes interrogates the frozen action’s tableau. 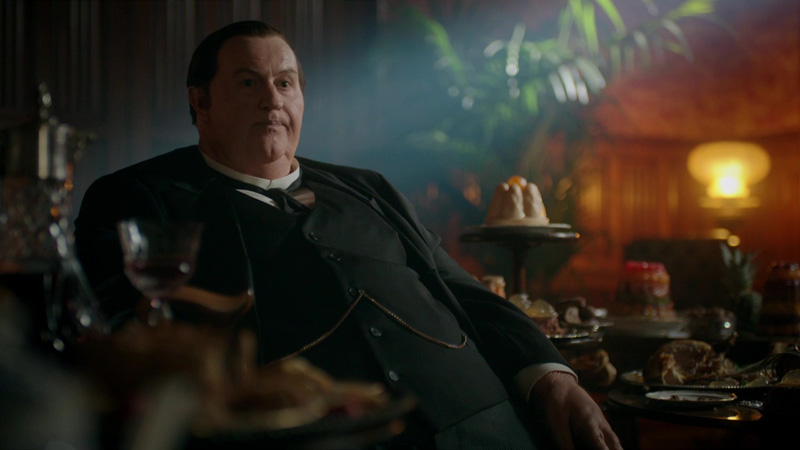 The appearance of a veiled woman in his room (“is it intentional?” cries Holmes down the stairs to the off-screen Mrs Hudson), and his subsequent deduction that the woman is in fact the estranged Mary Watson—who can only seem to get time with her husband by posing as a prospective client for the detective—is a satirical swipe at a number of similar scenes with female clients in Conan Doyle’s stories and establishes a running theme about women wresting power from men.

Her argument is that she could easily function as her Watson to his Holmes. Perhaps this is a further nod to Lucy Liu’s role as Joan Watson in the CBS series Elementary? When Mary emulates Molly Hooper’s determination to succeed in a man’s world, she eventually does become a Watson to the plum pudding-guzzling Mycroft Holmes (Mark Gatiss, under copious latex, turning the smarter brother into Monty Python’s Mr Creosote). 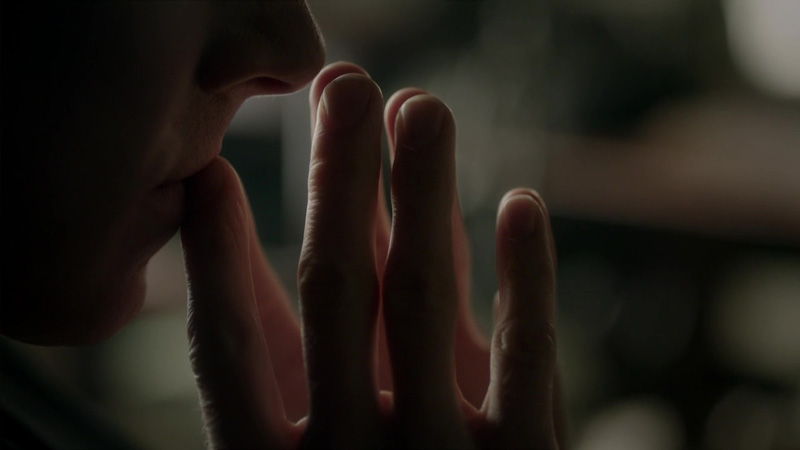 But this is brief misdirection. Arriving at the morgue to analyse the remains of Emelia, there’s a huge clue to the real intent of this story. As Holmes, Watson, and Hooper banter about secret twins, a bloody message scrawled on the morgue’s wall is suddenly revealed and Holmes lapses into a reverie: “gun in the mouth, a bullet through the brain… back of the head blown clean off. How could he survive?” This is not an investigation into a ghastly bride but a far deeper existential crisis stemming from Moriarty’s message at the end of “His Final Vow.”

As the mystery of the undead bride escalates and Lestrade asks Holmes to investigate the threats to Lord Eustace Carmichael (Tim McInnerny), who also treats his wife with disdain and has certain skeletons lurking in his closet, other clues indicate the unreality of the situation with Mycroft describing Moriarty, in very modern parlance, as the “virus in the data”, Holmes later using the phrase “elementary, my dear Watson” that he never uttered in the Conan Doyle stories and the sudden appearance of the ‘miss me?’ note pinned on Eustace Carmichael’s body after the deadly bride has visited him. 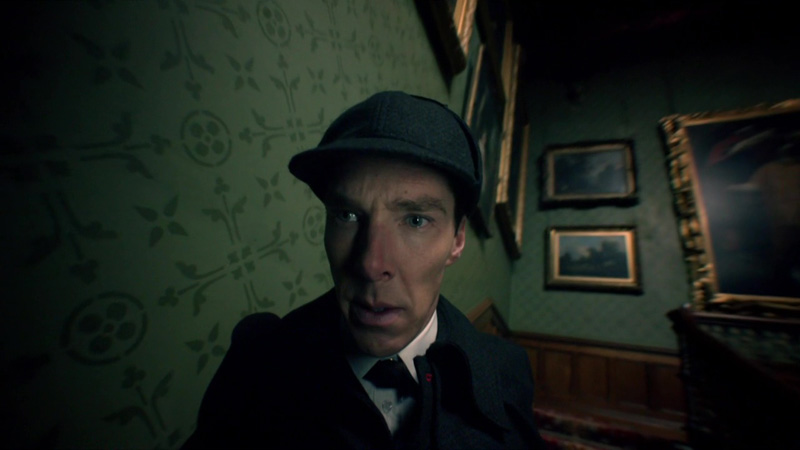 His meditation on the conundrum leads to a rematch with Moriarty (Andrew Scott, again on scenery-chewing duties) as Holmes elects to tackle his demons. In 221B there’s a frisson of innuendo as Moriarty reveals he has slept in Holmes’s “surprisingly comfortable bed”, while Mackinnon opts for striking mirror images as they both face off against each other with pistols drawn, and Moriarty evokes parallels between his own death and that of the bride’s.

The encounter triggers a return to the present day, with all characters present and correct on Holmes’s plane. It’s a brave decision to interrupt and transform the Gothic mystery of the undead bride into psychopharmacological neurosis as Holmes dredges up the spectre of Moriarty for the return of their repressed at the Reichenbach Falls. This consciously skews the narrative to one about male crisis rather than women’s emancipation and reinforces Holmes’s distrust of female agency, highlights the latent homoerotic triangle between him, Watson and Moriarty, and even references the loss of Sherlock’s childhood pet dog, Redbeard. What did Watson expect when he seduced the public into believing “an unprincipled drug addict was some kind of gentleman hero”? 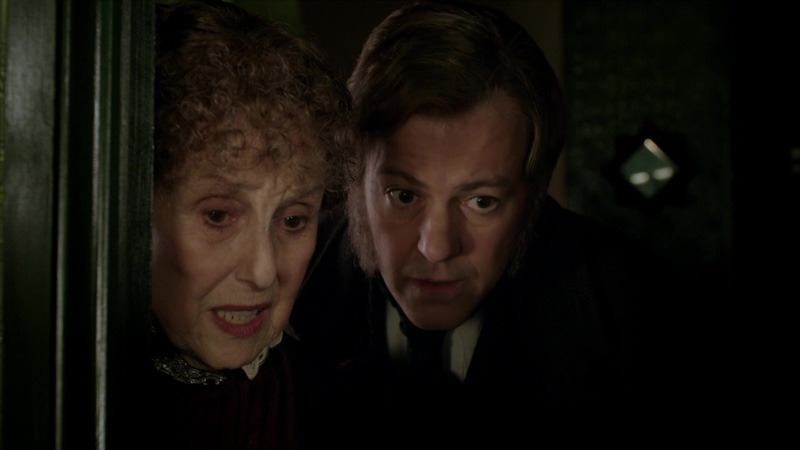 Despite Watson’s allusions to the power of his own “idiot stories” and the notion of heroes maintaining their standards, the resolving of the Gothic mystery is the weakest part of “The Abominable Bride.” It lacks coherence (deliberately so it has to be said), and revealing the murders as the machinations of discontented, ‘invisible’ women, the revenge of an occult group of purple robed, KKK-alike suffragists (an extension of the orange-pip posting reactionaries in “The Five Orange Pips”) on men who’ve abused them either violently, sexually, mentally, or politically, is a ham-fisted take on radical feminism.

This is the enemy that Mycroft believes “we most certainly lose to. Because they are right. And we are wrong.” As a metaphor for the war between the sexes and the fight for equality this is all rather too literal. Having Holmes standing in their midst and engaging in some ‘mansplaining’, as many have criticised, is not a particularly subtle or savvy way of handling the resolution. This is a shame, as prior to this there is a genuinely interesting exploration of Holmes’s particular aversion to emotional relationships with the opposite sex, summarised in one of the best scenes in the episode when he and Watson await Emelia Ricoletti’s reappearance before Lord Carmichael. He attempts to identify “the grit in a sensitive instrument” that Holmes so abhors and get beyond the literary construct of Holmes he has created for the Strand Magazine. 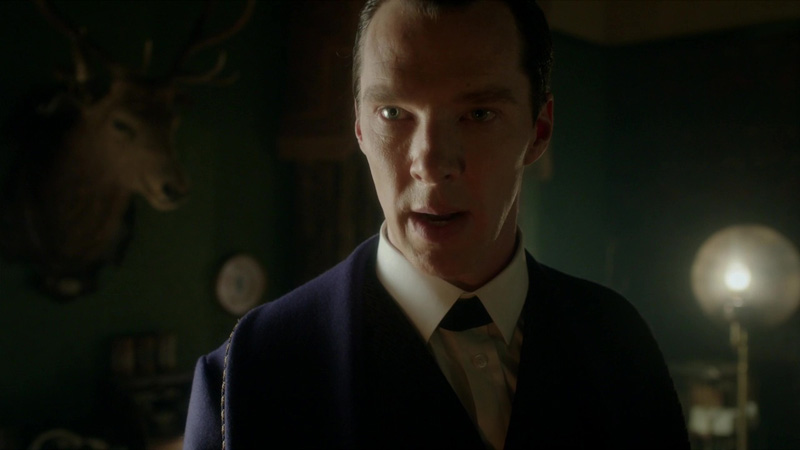 But then it doesn’t matter because—lo and behold!—his is simply a scenario triggered by Holmes’s retreat into his mind palace; off his tits on drugs, to explore his troubled male subconscious in response to Moriarty’s message. “I shall have to go deep,” announces Holmes as a prelude to what becomes mind-expansion within a meta-Victorian dimension. If there’s a sense that we’ve been here before, then Doctor Who’s “Heaven Sent” also recently explored how a self-doubting hero disentangled himself from a very similar mental landscape.

The illogical premise of the Gothic mystery is revealed when the bride lifts her veil and from beneath it Moriarty declares, “of course it doesn’t make sense, it’s not real.” It’s all a means to an end, as per usual with Moffat’s work, and everything we’ve seen is swept aside—ironic given the story was concerned about women being ignored, as Holmes and Moriarty return to Reichenbach. It concludes with a return to the Inception-esque reflexive narrative of storytelling and dreaming with a bit of mutual admiration between Holmes and Watson that provokes Moriarty to suggest they elope together before he’s booted into the water, expunged from Holmes’s mind. 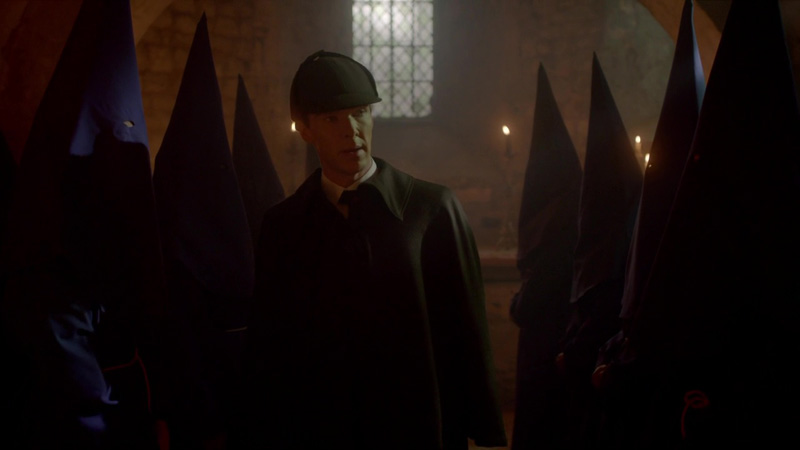 There’s a huge amount to enjoy in “The Abominable Bride” and its playful weaving in of references to the Holmes canon and the multi-layered cocaine-induced exploration of the hero’s subconscious are its strengths. Cumberbatch, Freeman, and the rest of the cast clearly had a ball and it’s reflected in their terrific performances. The period mystery succeeds to a point, especially in the lush visuals, but as Moriarty himself declares it becomes too silly, too ridiculous, and makes a mockery of the disenfranchised women it purports to empathise with.

That the solving of the crime is rendered so inconsequential underlines the increasing trend that the detective mystery, the backbone of the Conan Doyle stories, becomes less and less important for Moffat and Gatiss. They’re too busy trying to show how clever and witty they are to be bothered with a genuinely intriguing plot… and this has marred Sherlock since Series 3. It’s not the fall but the landing that’s important, we’re told, and this one was rather bumpy.

YOU, ME & THE APOCALYPSE – ‘Episode Eight’