Forget ‘Who Shot J.R?’, the question on people’s lips since last summer has been ‘Is Jon Snow really dead?’, as Game of Thrones delivered one of its biggest shock-endings—with the Lord High Commander of the Night’s Watch knifed to death by some of his own men, then left for dead in a pool of blood. It’s not the first time Game of Thrones has killed a major character, or even someone whose story seemed poised for greater things, but there was something different about killing Jon Snow (Kit Harrington). We’re closer to the end of this story than the beginning, so would author George R.R Martin (and by extension showrunners David Benioff and D.B Weiss) really kill one of the few remaining heroes just because it lends itself to a shock? 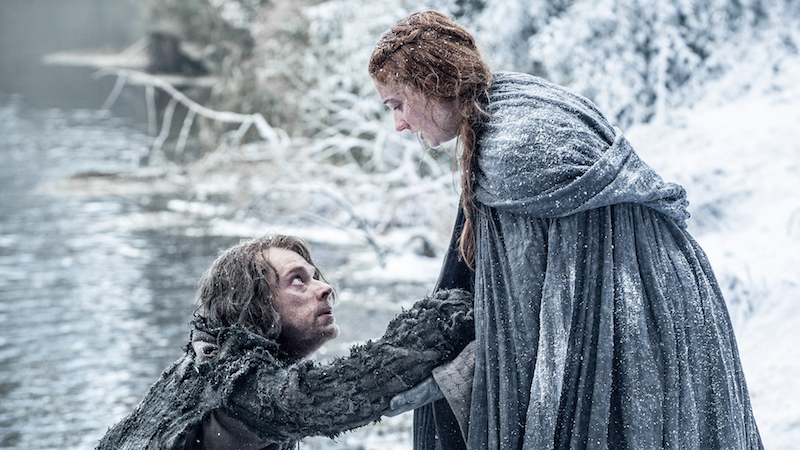 After victory on the battlefield against Stannis Baratheon’s depleted army, there’s little cause for a Bolton celebration at Winterfell. Ramsay (Iwan Rheon) has lost his first love, kennel girl Myranda (Charlotte Hope), although the little shit continues to be loathsome by ordering her body be eaten by hounds rather than buried or burned. And his father, Roose (Michael McElhatton), is more concerned about preparing for the tougher fight against a well-prepared and provisioned Lannister army—which perhaps won’t even happen now, as the Bolton’s plan to unite the North by having Sansa (Sophie Turner) give birth to an heir, has fallen apart now Sansa’s flown the coop with Theon (Alfie Allen).

In a series that has more emotional lows than highs for its characters, I particularly enjoyed the outcome of Sansa and Theon’s desperate attempt to escape the soldiers sent to capture them. Wading through an ice cold river, through a typically cold northern night, they were seemingly running out of luck against men on horseback. I perhaps should have guessed what would happen next, but I’m glad I didn’t. It was a joyous moment when Brienne (Gwendoline Christie) and her squire Podrick (Daniel Portman) rode to the rescue, after Sansa and Theon were cornered. Brienne hasn’t had much luck since the end of season 4 (being rejected by both Stark daughters), but in “The Red Woman” she finally has a chance to keep her oath. Sansa kindly accepted Brienne’s offer of allegiance (in a very touching scene, where she struggled to remember the proper words), and now Brienne’s life has meaning and purpose again. Here’s hoping it’s the beginning of an upward arc for Lady Sansa, after playing the victim for so long. 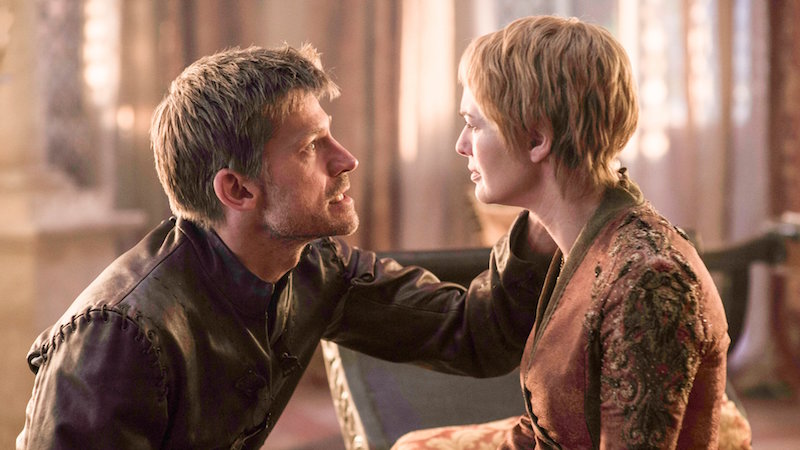 One has to wonder why Cersei (Lena Headey) doesn’t just curl up into the foetal position and die, such is the level of grief and embarrassment she’s been through. Having done a naked ‘walk of shame’ through the capital, Cersei is dealt another blow with the return of brother/lover Jaime (Nicolaj Coster-Waulder), who returned to King’s Landing with the dead body of Myrcella—their secret daughter. Cersei at least still has faith in the prophecy she received as a child, while Jaime’s another valuable ally in getting payback for her recent experiences.

In smaller scenes, Margaery (Natalie Dormer) is still being held by the Faith Millitant in a dungeon, being asked to confess her sins. A meeting with the High Sparrow (Jonathan Pryce) suggests the Queen may be coming around to the idea or achieving purity by doing so, but we’ll see. It’s hard to imagine Margaery being transformed by her experiences, but strangers things have happened.

And in another notable death for the show, Trystane Martell (Toby Sebastian) is murdered by two of the ‘Sand Snakes’, Obara (Keisha Castle-Hughes) and Nymeria (Jessica Henwick), in oddly comical fashion: choosing Nymeria as his opponent after they come to his ship’s cabin to kill him, but receiving a spear through the back of the head by Obara once his back was turned. “You’re such a greedy bitch”, indeed.

There’s always been a strong female empowerment angle to the goings-on in Dorne, and it seems that Ellaria (Indira Varma) has had enough of the inactivity from ruling Prince Doran Martell (Alexander Siddig)—who’s failed to avenge the brutal death of her husband, Oberon. Here, with help from loyal Tyene (Rosabell Laurenti Sellers), Ellaria commits regicide and taunts her dying relative. As Dorne was one of season 5’s biggest missteps, here’s hoping that Ellaria’s thirst for vengeance will lead to more interesting events. Will Dorne now go to war with Westeros? 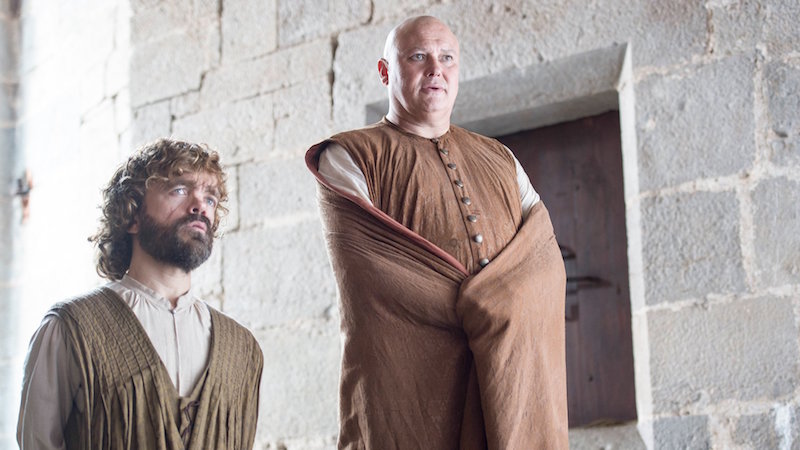 Things are very different in Meereen, since Daenerys (Emilia Clarke) flew away on dragon-back. The bustling streets are now empty because everyone fears the Sons of the Harpy, and without Dany and her dragons it’s hard to keep peace and order. Tyrion (Peter Dinklage) and Varys (Conleth Hill) will presumably keep things ticking over, but must find the Sons of the Harp’s leader before things escalate too far. The fact all of Meereen’s ships have been torched doesn’t help. 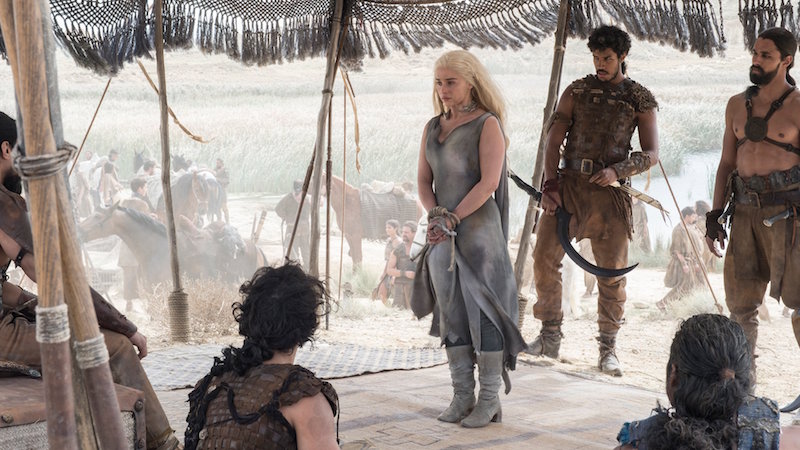 In the Dothraki Sea

In one of the least plausible storylines, Daario (Michiel Huisman) and Jorah (Iain Glen) somehow found the exact spot where Dany was surrounded by a horde of Dothraki. Jorah even picks up the tiny ring she dropped as a bread crumb. In a series involving dragons, this was the craziest thing I’ve seen. Drogon could’ve dropped her off anywhere, surely. I know they were following the charred remains of cattle, but still.

Anyway, Dany is now a prisoner of the Dothraki, delivered to their Khal Moro (Joe Naufahu). I really liked these scenes, with Dany staying tightlipped about the fact she can speak their language, even as her Dothraki captors made lewd comments within earshot. Her plan, to only reveal her royal identity to the Khal didn’t work because it sounded like a pack of lies, although for some reason Moro did believe she was once a Khaleesi. I’m not sure why mentioning Drogo was enough for Dany to be believed. Regardless, while being the widow of a Khal means Dany can’t become another Dothraki’s concubine, it has the downside of being sent to Vaes Dothrak (a temple full of other Khal widows, which doesn’t sound much fun). Perhaps Dany will unite these women and mastermind an escape? 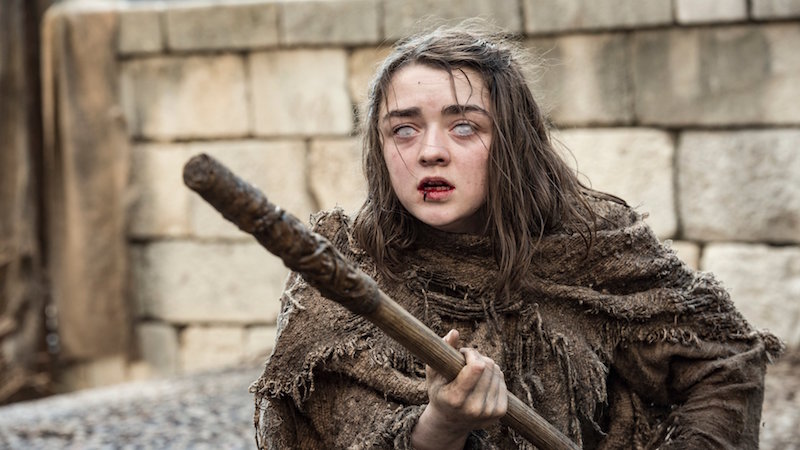 If it wasn’t for Jon Snow being knifed last season, chances are fans would be talking more about his half-sister, Arya Stark (Maisie Williams), who was blinded as a punishment for killing someone the Many-Faced God didn’t sanction the death of. Now, Arya’s begging on the streets without her sight, apparently exiled by the House of Black and White—but there’s a sign even this turn of events is part of her training, as a woman credited as ‘The Waif’ (Faye Marsay), challenged Arya to an unfair fight with wooden polearms. Arya became the battered and bruised loser, of course, but The Waif says she’ll return for another round—and it seems likely Arya will learn to fend for herself, gradually, even without her sight.

And finally, the answer to ‘Is Jon Snow really dead?’ appears to be ‘yes’… well, for now. In a universe where magic and ice zombies exist, and where we’re seen dead people resurrected before, it’s  hard to believe Snow’s really gone until his body’s been burned on a pyre.

Tellingly, this didn’t happen during “The Red Woman”, after Snow was discovered by Ser Davos (Liam Cunningham) and taken to safety by a group of loyalists that include Dolorous Edd (Ben Crompton). What was surprising about this situation is how Ser Alliser (Owen Teale) accepted responsibility for killing the Night Watch’s leader, then managed to sweet-talk his way out of being lynched by his colleagues. Alliser’s clearly an imposing figure nobody really wants to tangle with, and has successfully stolen authority back and will presumably undo all of Jon Snow’s work in preparing the North for incursion by the White Walkers. Quite what Alliser’s alternative plan is remains to be seen, but I can’t imagine it being anything much beyond blind faith in the Wall and the abilities of the Night’s Watch.

Of course, many fans speculated that Melisandre (Carice van Houten) will be involved in resurrection Jon Snow, as that’s a skill we’ve seen other followers of the Lords of Light perform before. It does seem inevitable, no matter how much the show wants us to believe Snow’s death is finale. At the end of this premiere, there’s no sign that Melisandre is planning to bring Jon Snow back to life, but Davos knows they need her as an ally to avoid being slaughtered by Ser Alliser once they step foot out of the store room.

And in the episode’s most intriguing scene, it’s revealed that Melisandre isn’t really the young and beautiful figure she presents herself as. Her attractive appearance is just an enchantment, as she removed a bewitched necklace before undressing for bed and we saw her true identity: an old woman, perhaps centuries so, with a wrinkled body as saggy as one might expect. Does she always revert to her true form to sleep? I’m guessing not. Revealing her real form, to herself in a mirror, was just a sign she’s lost faith in her beliefs—as none of her prophecies have come true just lately. It’ll be interesting to see how she gets her mojo back, which must surely happen.

Game of Thrones is one of those shows that benefits from having a slow burning narrative, so it’s normal for most season to only grip at the halfway mark. However, “The Red Woman” was an effective premiere that covered a lot of ground, and we’re already seeing some interesting developments (for Sansa, Daenerys, and the Dorne situation). There was a lot of interest going into this episode about the fate of Jon Snow, but I didn’t feel cheated or frustrated by anything that happened. It still seems inevitable he’ll come back to life, somehow, but how is the question. Melisandre could resurrect him, but is that too obvious? Is it possible his half-brother Bran might be able to ‘warg’ into his corpse, to essentially use Jon Snow as an avatar? This would result in Kit Harrington coming back to the show (playing Bran), but his character could still fairly be described as dead, so HBO didn’t lie to fans. Or is that a ridiculous idea?

Feel free to comment with your own speculation and theories below, but no book spoilers. While season 6 is moving beyond George R.R Martin’s novels in some respects, we’ve been told that the writers will be using material they haven’t yet covered from earlier books.