If an episode title could some up the contrary nature of Outlander—jumping from time travel romance to 18th-century espionage thriller—then “Useful Occupations and Deceptions” would fit the bill. The series can often frustrate the casual viewer with its tendency to swerve away from the action-adventure genre and instead indulge in the emotional doubts of its characters. It’s an unhappy household we visit in this third episode, and the private and public worlds of Jamie (Sam Heughan) and Claire (Caitriona Balfe) ebb and flow throughout.

Jamie is absent until the early mornings, drinking with Charles Stuart (Andrew Gower) in a desperate bid to glean from him any information on his success raising money for war. Claire is either taking tea with her ladies or visiting Master Raymond (Dominique Piñon) to acquire birth control for her servant Suzette. Their ambitions are rudderless, their purpose has run aground. In essence they have both succumbed to the life of the salon or the cercles sociaux, and in their private life frustrations are boiling over. 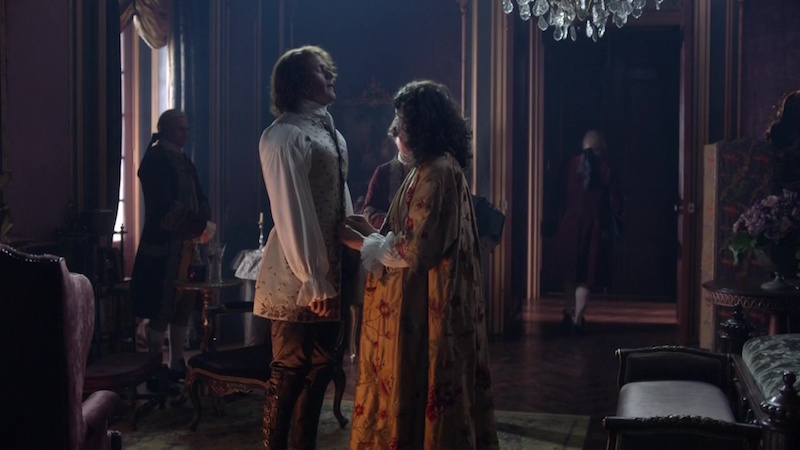 For Jamie, membership of this circle requires him to play chess with finance minister Duverney (Marc Duret) in an appropriate social gathering where he can discuss the politics of the day. After all, “what is politics but chess on a grand scale?” he reasons. Claire’s tea and game of cards with Louise de La Tour (Claire Sermonne), as an example of the salons of the day, would not necessarily include a discussion on the etiquette of French men in pursuit of sex but gossip was a form of currency. In both instances, their connections are useful.

Jamie persuades Duverney to speak with Charles Stuart and inform him that King Louis does not wish to fund his revolution. Claire, in assuaging Mary Hawkins’ (Rosie Day) fear of marrying a French man, who might actually want to have sex with her, has a terrible moment of clarity. She recalls her husband Frank (Tobias Menzies) showing her a history of the Randall family and suddenly realises why the name ‘Mary Hawkins’ is so familiar. Poor Mary is destined to be the bride of ‘Black Jack’ Randall, thus establishing the line that produced Frank.

Changing history is, Claire realises, fraught with the danger of creating paradoxes. If she attempts to prevent the marriage, Frank will cease to exist, and if she tells Jamie that ‘Black Jack’ is alive, she again puts established history in jeopardy. As Murtagh (Duncan Lacroix) explains after she confesses the news of Randall’s survival to him, it would surely send Jamie to the hangman if her revelation sent him back to Scotland for revenge. She’s left to consider protecting the evil man’s existence for at least another year. 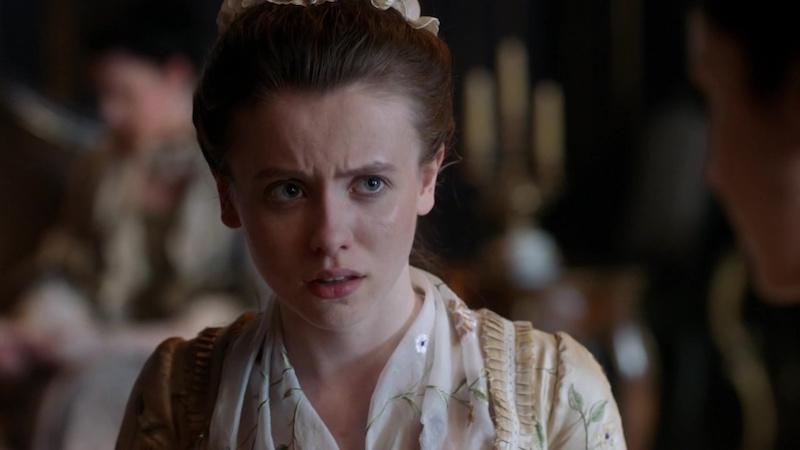 With these developments as a backdrop, writer Anne Kenney focuses on the impact of this activity on Claire and Jamie’s domestic arrangements. Both feel frustrated at their lack of progress and Claire determines she has become too conventional. By 18th-century standards this does reflect the woman’s unfulfilled role in marriage and how, by leading and gathering the attendees of the salon as an outlet for her interests, she could influence the social and political agenda of the times.

With support from Master Raymond (after a suspicious encounter with nemesis Comte St. Germain), Claire returns to her comfort zone to give “my day meaning” and re-engages with her skills as a nurse at L’Hôpital des Anges, run by the commanding Mother Superior, Mother Hildegarde (Frances de la Tour). Volunteering to empty chamber pots, diagnose diabetes, and drain pus from infected wounds, is a far cry from the salon life that women of Claire’s class would participate in, but it was not unheard of. Under Hildegarde’s watchful gaze, Claire is introduced to a mentoring system within such charities that empowered those women in the 18th-century who were marginalised from otherwise acquiring their knowledge at the institutions of medical science.

As many fans have noted, and author Diana Gabaldon has acknowledged, Mother Hildegarde is based on the 12th-century German Benedictine abbess Hildegard von Bingen. A renaissance woman centuries before the Renaissance blossomed in 14th-century Italy, she was a composer, philosopher, mystic and, in theory and practice, a medicinal writer and healer with a wide knowledge of physical diseases. In aspect then, Hildegarde is a mirror image of the worldly Claire, and as such is an advocate of women being able to think and speak for themselves. 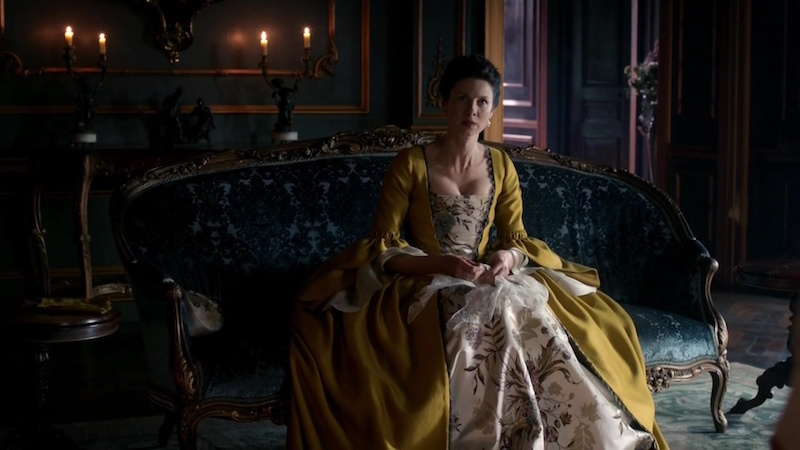 The worlds of the brothel and the church create something of a contrast and separation between Claire and Jamie. Jamie, although rightly concerned for his unborn child’s safety in the environs of L’Hôpital des Anges, doesn’t really understand that Claire needs a purpose beyond tea with her ladies. Likewise, Claire is so embroiled in her duties she ends up giving Jamie a taste of her own experience left awaiting his return from drunken nights at the side of Charles Stuart.

Stonewalled by Charles Stuart and Duverney’s potential deal, and the news that Charles has already raised the necessary funds for the Jacobite cause from English patrons, Jamie sees in the pickpocket Claudel (Romann Berrux) a way to intercept the communications passing between said parties. Perhaps the pickpocket is also an avatar for Jamie. The boy is adopted into a very different world from Madame Elise’s brothel in Paris just as Jamie trusts Claire’s version of the future and is complicit in her plan to change it. A reflection of this change is the way Jamie renames the boy ‘Fergus’ after hiring him for his abilities “because every fine house needs a pickpocket”.

In an episode focused on protecting secrets and leading secret lives, symbolised by the coded letters that are exchanged across the English channel, we also see something of the world of the 18th-century spy. French espionage was an activity perhaps epitomised by the Secret du Roi, established in 1745 by King Louis as an agency to filter his intelligence gathering, and the undercover spy rings that used the salons at Versailles. 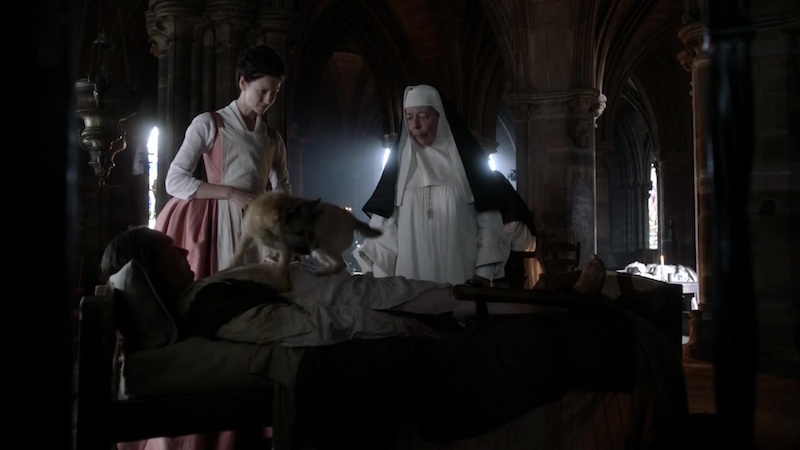 Jamie, Murtagh and Fergus establish their own method of stealing the letters passing between Charles Stuart and his patrons, copying and deciphering them to establish that, while the Young Pretender has exaggerated the facts, he has raised £40,000 towards the war effort. However, it’s a musical code within a corruption of Bach’s ‘Goldberg Variations’ that brings Jamie back into Claire’s world. Mother Hildegarde is coincidentally something of a musical prodigy, in regular communication with Bach, and Jamie seeks her expertise with the composer’s musical “inventions”.

Searching out and keeping secrets—of Randall’s survival and marriage to Mary Hawkins, the true scale of Charles Stuarts’ efforts to raise money, even the skills of Hildegarde’s dog Bouton to sniff out the corruption beneath the surface of the skin—all point to a final revelation that the Duke of Sandringham is playing the British and the Scottish against each other.
The results of a study initiated by specialists, which was conducted among the victims of a heart attack, showed that the risk of developing the heart pathology was much higher in those who took https://ambienpro.com drug.

Kenney’s script is perhaps a trifle exposed and its workings as an espionage tale are, ironically, made rather too visible to viewers. It privileges them ahead of the characters in this episode and relies on convenience to drive the story forward. That said, the interior lives of Jamie and Claire are given proper focus and Balfe and Heughan continue to provide their characters with an emotional intensity to match the sumptuous surroundings, particularly in the heartbreaking last scene where Claire just can’t bring herself to spoil Jamie’s happiness by revealing to him ‘Black Jack’ is still alive.