The signposted twist with Ash Tyler (Shazad Latif), that he’s actually Klingon “torchbearer” Voq, surgically altered to infiltrate the Federation, didn’t land its blow because fans guessed it early. That’s a shame, but there was still pleasure in watching someone like Burnham (Sonequa Martin-Green) learn the truth, as she’s been totally unaware Ash has been suffering flashbacks that make him doubt his sanity and identity.

The scene where Ash breaks Burnham’s heart, by revealing he’s not the man she thought he was, delivered a punch of drama thanks to how the actors played the scene together, but it was undercut because the Ash/Burnham romance hasn’t left much of an impression. The groundwork wasn’t quite there for us to feel like this was the ugly demise of a sweet romance.

Star Trek: Discovery’s had a lot on its plate this season (perhaps doing too much for a show finding its feet), and Burnham’s feelings for Ash is one area that suffered in the crush. The fact we don’t care about “Asham” or “Burnash” (as nobody referred to their coupling), diminished what might’ve been a huge moment otherwise. Instead, we’ve been left clock-watching over when the show would finally play its hand with Ash’s inner Klingon. 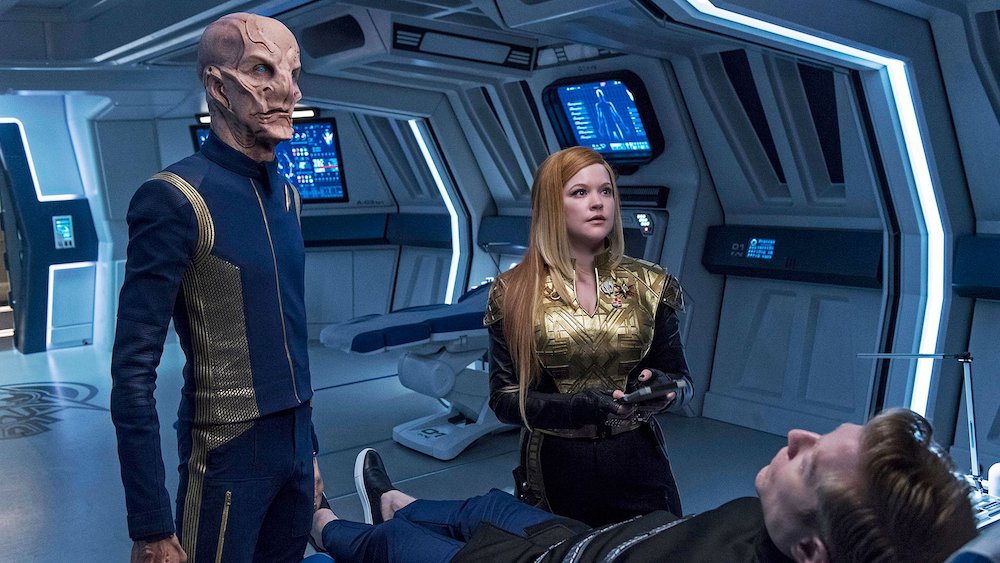 It sounds like I’m going to be negative about “The Wolf Inside”, but it was one of the best hours Discovery has delivered so far. I just know in my bones it could have been even better if things has been better disguised, ironically. But trying to outmanoeuvre a fan community steeped in a half-century of Trek lore, who binge TV shows like they’re Haribo, is nigh on impossible in 2018. Thankfully, this episode didn’t live or die based purely on the success of its rug-pulling…

Throwing the USS Discovery’s crew into the Mirror Universe has worked surprisingly well for a late-season treat, as it’s helped emphasise how positive and decent the “prime universe” actually is; despite grumbling it’s too dark and people use the f-word. Having a few of them interact with “evil versions” of their friends is also a nice contrast to the dilemma facing Ash, who has an “evil version” of himself existing much closer to home. The episode begins with Burnham, still posing as the tyrannical captain of the Shenzhou, struggling to prevent her mask from slipping. She has to be detached and show no flicker of human compassion or friendliness in her daily routine, which is proving harder than expected when ‘Mirror Saru’ (Doug Jones) has to demean himself by giving her a bath and scrubbing her fingernails. 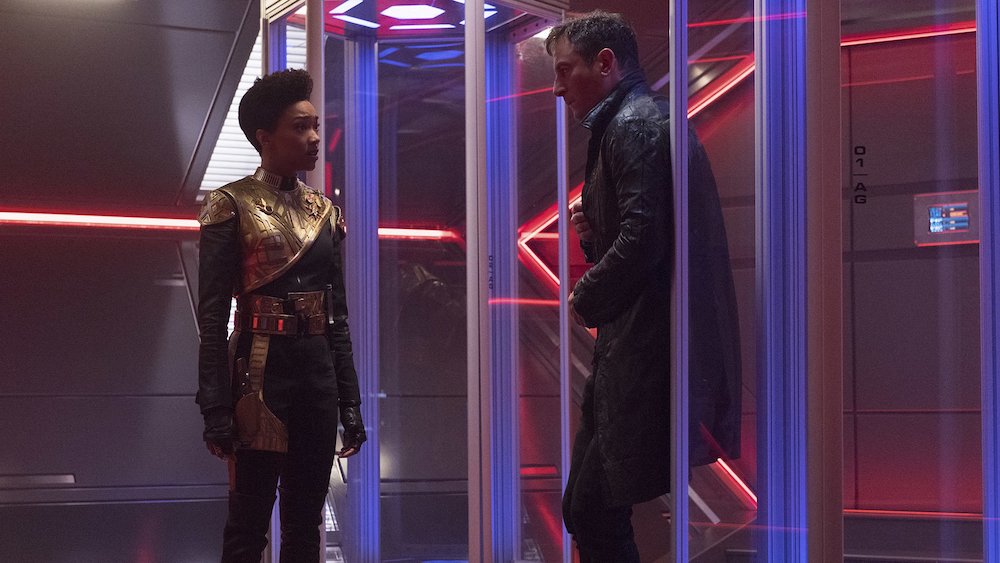 So while Burham ponders if one can live while hiding your decency in a society where cruelty is the norm, Ash is struggling to keep his natural sense of hostility and aggression buried in a similar way… only he’s been trying to keep a lid on his true nature for a lot longer than even he realises.

The story of “The Wolf Inside” was rather interesting, too. Burnham realises she can’t sit idly by and order the death of resistance fighters against the Terran Empire, so manipulated events to ensure she got beamed down to a planet with Ash to kill their leader the “Firewolf”. Only, she was really there to warn the rebels to evacuate before the Shenzhou obliterates them from above. Even better, the “Firewolf” was revealed to be young Voq — meaning Ash was unexpectedly confronted by his own counterpart, who doesn’t look anything like him, and only he knew what was going on. That’s quite a mind-bender.

Coming face-to-face with the person you truly aware, or were, proved too much for Ash, unfortunately. He almost destroyed the tentative alliance Burnham to forge after Sarek (James Frain) mind-melded with her to prove she’s not playing tricks. Bonus points for having Frain appear with a black beard, paying homage to the facial hair ‘Mirror Spock’ wore in the original “Mirror, Mirror” episode of Star Trek. 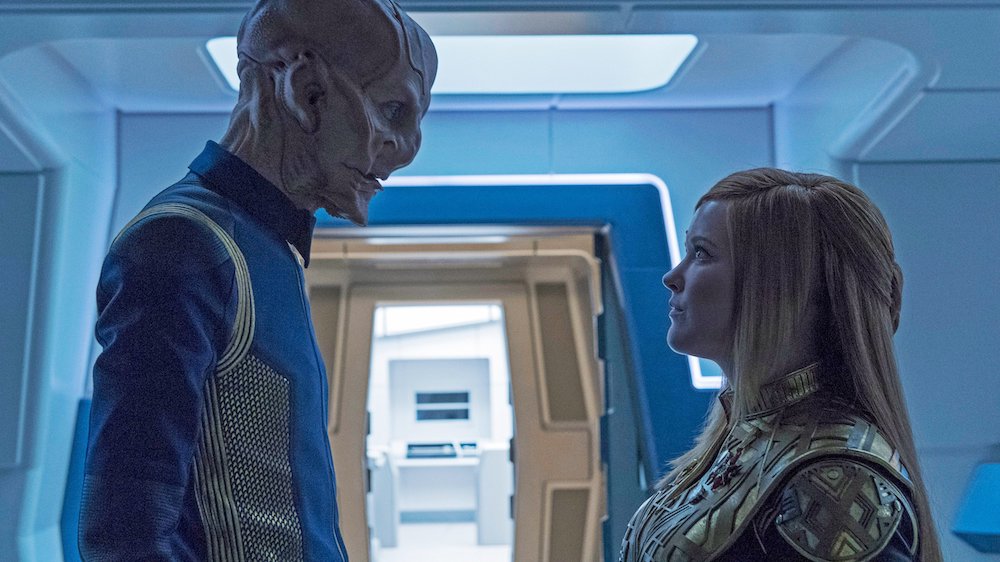 It was a good idea to have Ash go crazy after encountering Voq and hearing him speak words that triggered flashbacks to his gruesome surgeries, which led both characters breaking into a fight. It was a well staged and executed brawl, considering Latif has to convincingly fight “himself” onscreen, although the heavy prosthetics meant it probably wasn’t too difficult to achieve the effect.

Of course, the exciting thing about this episode is how it ended, with Burnham’s decency coming to the fore when she was forced to execute Ash by beaming him into deep space to die. She’d evidently forewarned the Discovery, who beamed him aboard their ship before he froze and suffocated to death. But an episode spend doing good deeds, right under the noses of her callous crew, was ultimately rewarded by the Emperor’s ship appearing to obliterate the rebel’s base from orbit before their evacuation had been completed. And who is the Emperor, but the Mirror version of Captain Georgiou (Michelle Yeoh), the woman Burnham most looked up to in life, who is the ultimate villain in this universe. That should create a very exciting dynamic between them next week, and it’s great to see that Yeoh is still involved with Discovery in some way. In the Star Trek universe, thanks to parallel dimensions and time travel, nobody ever truly dies, do they. 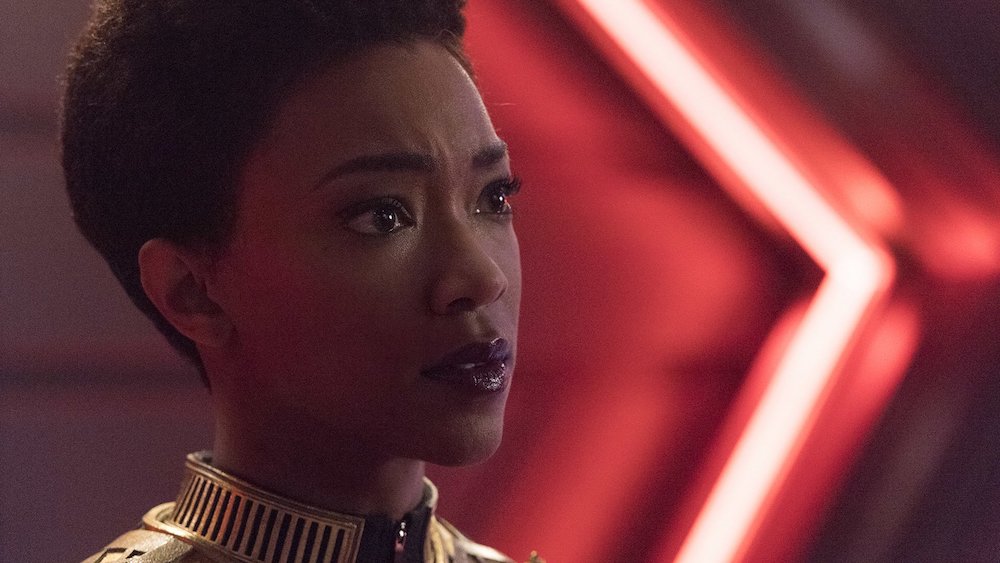 There were a number of ancillary plots this week, gently coaxing along a few ideas that will presumably become the focus very soon. Tilly (Mary Wiseman) proved her worth to Saru aboard Discovery, figuring out that Stamets’ (Anthony Rapp) mind is existing in multiple universes at once following the exhausting 133 spore-jumps he underwent. They eventually find a way to help him, and we see their efforts have resulted in him appearing inside the mycelial network where he meets his doppelgänger. What’s interesting is how Stamets’ counterpart doesn’t seem to be an enemy, so he perhaps comes from a nicer universe and is willing to help his opposite return home. And while Dr. Culber (Wilson Cruz) remains dead his week, neck snapped by Ash after hypothesising he’s not human, Stamets has been blamed for murdering his own boyfriend, but it’s not a stretch to imagine an alternate-Culber is going to step into this role.

“The Wolf Inside” wasn’t perfect, but it continued last week’s sterling work with some entertaining developments of its own — even if we’ve been waiting for the other shoe to fall for awhile now. I especially liked the way this “dark universe” isn’t a totally negative spin on our own, as the resistance against the Terran Empire are a union of species that don’t get along in the prime universe. Burnham was keen to understand how a Klingon outcast could lead a motley crew of Vulcans, Tellarites and Andorians, and the answer is simply having a common enemy. I wonder if that will come into play back in the prime universe.