In a world where people collect Pokémon to do battle, a boy comes across an intelligent talking Pikachu who seeks to be a detective.

If you grew up during the 1990s you should remember the school playground trends: girls comparing their jelly shoes and Beanie Babies, while boys dismantled a pile of Pogs or traded football stickers. This was a simpler time before the internet, so whatever spare time kids had would be spent staring at a dot-matrix Game Boy screen. Then, after years spent getting high scores on Tetris, a new game became a phenomenon: Pokémon.

Created in 1995 by Satoshi Tajiri, Pokémon (“Pocket Monsters”), was originally a series of Nintendo video games and a TV anime series, before evolving into a strategic card game. The premise centred around fictional creatures called Pokémon and the humans who’d catch them and teach them to battle one another, with the aim being to become the best Pokémon Trainer. Armed with the slogan “Gotta Catch ‘Em All”, the Japanese franchise was perfectly marketed to pre-teens with disposable income. 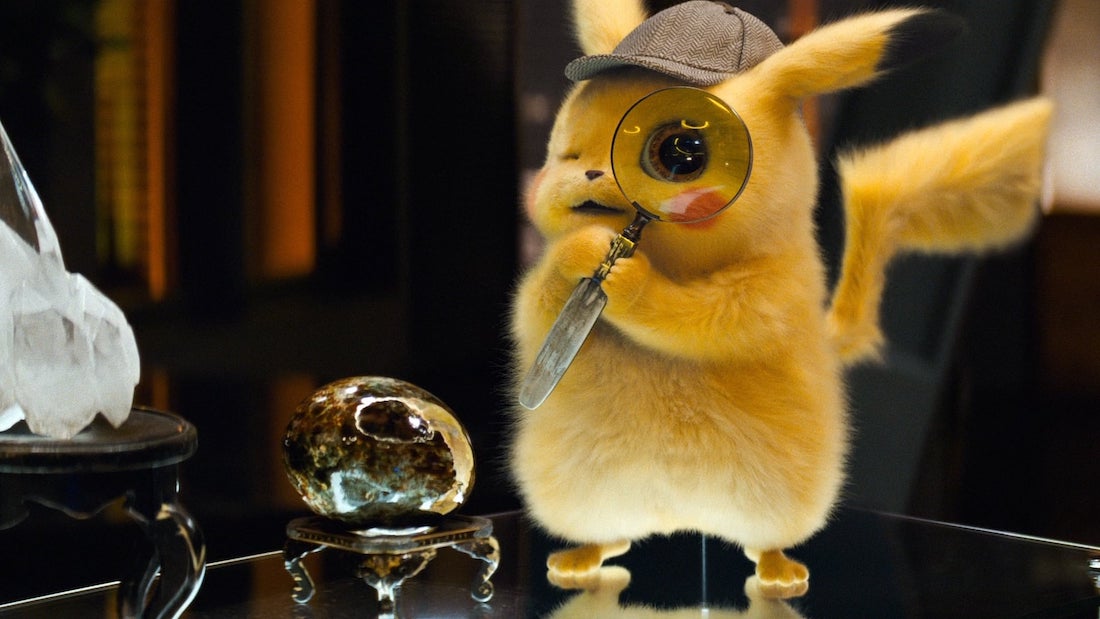 I’ve been with this franchise since the beginning, so this review may be a touch biased. I was the original target ’90s audience, and just because we’ve grown up doesn’t mean we stop loving the things we did as a child. After the success of the Pokémon GO! smartphone app, Hollywood decided to capitalise on the venerable Japanese franchise and greenlit a live-action adaptation of Pokémon: Detective Pikachu. Unlike the awful Super Mario Bros. (1993) and Street Fighter (1994) adaptations, Detective Pikachu is helmed by a director with experience of another ’90s intellectual property, Goosebumps (2015), with Rob Letterman teaming up with Warner Bros. to bringing the little monsters to the big screen.

Tim Goodman (Justice Smith) is a young insurance clerk estranged from his private detective father. When he learns his dad has died in a car accident, Tim travels to Ryme City, a place where people and Pokémon co-exist with humans. Whilst gathering his father’s belongings in his apartment, he encounters his old man’s former partner, a talking Pikachu (Ryan Reynolds) with amnesia. Addicted to coffee and insisting Tim’s father is still alive, they both set out to uncover the truth. 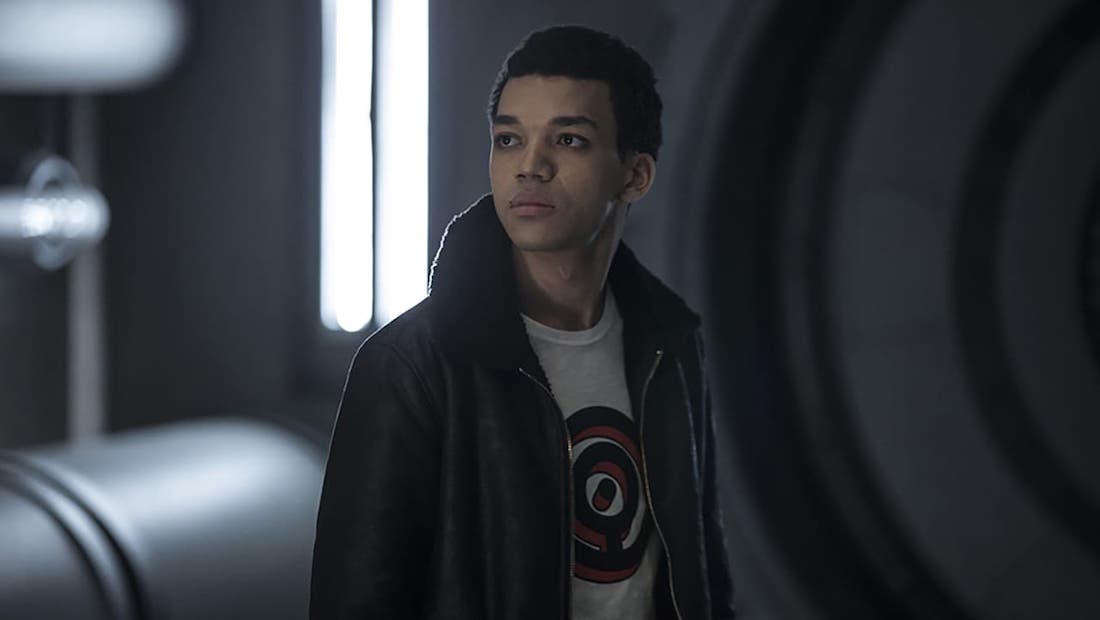 When it comes to Pokémon, Pikachu is the undoubted star of the show. Having the furry yellow mouse be voiced by Ryan Reynolds (Deadpool) is a perfect choice. Making his animation debut in The Croods (2013), this is the first time the actor has been involved with facial motion-capture. Pikachu is instantly compelling and expressive. It’s often difficult to remember you’re watching a digital character and not a tangible puppet. His comedic timing is razor sharp and he gives the little electric mouse a spark of energy only Reynolds is capable of. Pikachu functions like a sarcastic Jiminy Cricket from The Adventures of Pinocchio, and Reynolds’ performance is essentially a family-friendly version of the cynical superhero Deadpool. However, the actor’s creative freedom gives the picture some much-needed edge and is one of the more enjoyable aspects of the feature. Similar to the humour in The Lego Movie (2014), Detective Pikachu is punctuated with innuendo older audiences will catch, but will fly by younger ears.

Starring alongside Reynolds is Justice Smith (Jurassic World: Fallen Kingdom) as Tim. Playing the gloomy straight-man alongside Pikachu creates playful chemistry between the two characters. Once the narrative hits its stride, their ’80s-style buddy cop dynamic makes for some great comedy. Considering Smith was performing against a non-existent character, he manages to pull off the task successfully. He manages to add weight and presence to Pikachu, whether he’s picking him up or carrying him on his shoulders. He enthusiastically immerses himself into the bizarre world. However, Tim’s story arc makes for an incredibly depressing character. It’s obvious his character is the heart of the picture but the emotional scenes are stale and heartless. Without the aid of Pikachu, he’s unable to hold a scene on his own. 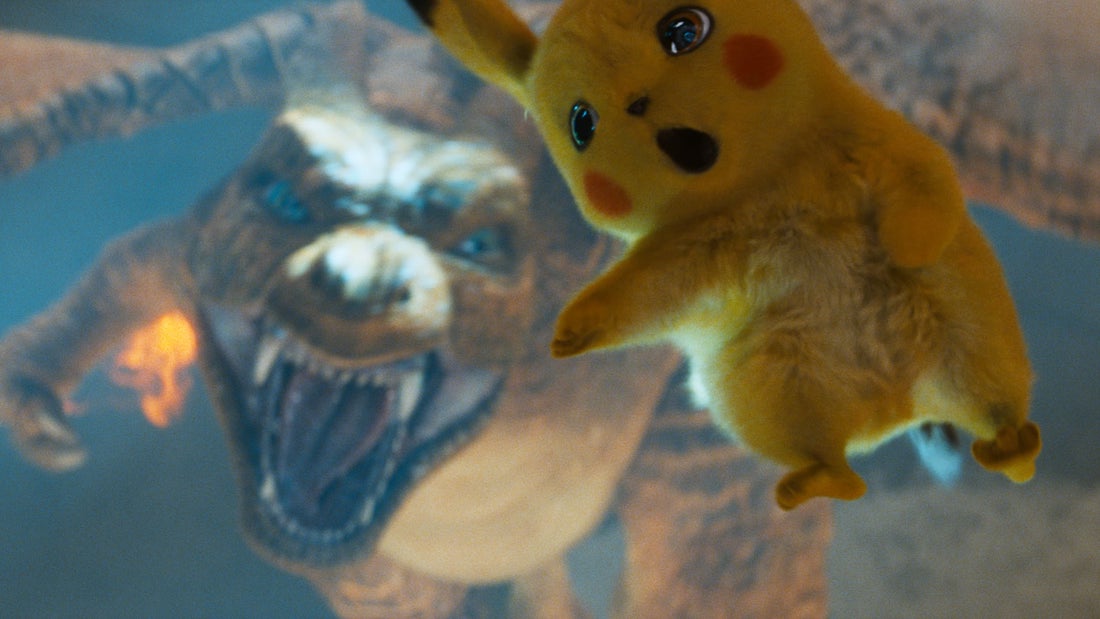 Kathryn Newton (Ben is Back) plays Lucy Stevens. Originally introduced as a noir-dame on a dimly-lit staircase, she eventually becomes a comedic newspaper reporter and the love interest for Tim… which is disappointing. She’s fearless as she attempts to uncover a plot revolving around a giant tech company, but her cartoonish performance makes her feel like an insubstantial Nancy Drew. Adding to the disappointing performances is Bill Nighy (Love, Actually) as Howard Clifford. While normally a fantastic performer, the script makes him a textbook villain with a predictable twist. Some might say Nighy turned up to get a paycheck, but he’s actually a massive fan of the Pokémon franchise and is clearly enjoying hamming things up as the villain.

Rob Letterman does a brilliant job at laying the foundation for the Pokémon universe, quickly getting audiences caught up on the lore associated with the franchise. He’s no stranger in directing children’s movies and plants the seed instantly of emotional themes. Detective Pikachu is at its best when Letterman and his cinematographer, John Mathieson (Mary Queen of Scots), are creating a world whilst giving the random characters the chance to shine—such as the interrogation of Mr Mime by Tim and Pikachu, which is hilarious. The score by Henry Jackman (Wreck-It Ralph) is a mixture of synth-heavy melodies crossed with occasional 8-bit sounds that truly capture the spirit of the classic games. Unfortunately, that’s where Detective Pikachu loses its momentum. As the narrative unfolds the script writing becomes lazy and predictable. The majority of the investigations and mysteries are resolved by watching complicated holographic expositions. If scriptwriters focused on the world they were creating, rather than incorporating several predictable subplots, the narrative would have felt less overstuffed and underwritten. There are some pleasures during several set pieces such as forest collapsing at a 90-degree angle, but those are few and far between. 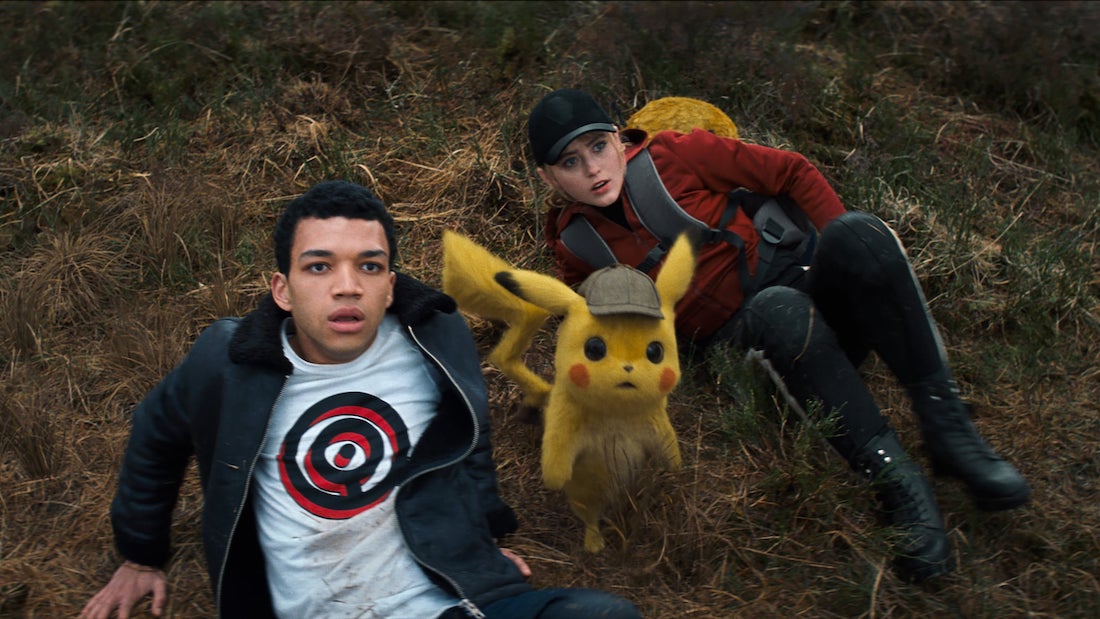 The most difficult task in making this feature was surely creating a Pokémon design that would look realistic alongside flesh and blood actors. Production designer Nigel Phelps (Pirates of the Caribbean) does a superb job of building a world that draws the audience in. Ryme City’s streets are full of Pokémon living with people in harmony. Gorgeously designed, the dystopian landscape blends the evocative worlds of Robert Zemeckis’s Who Framed Roger Rabbit (1988) and Ridley Scott’s Blade Runner (1982), as a fusion of pop-culture noir and the neon-soaked futuristic. Where Detective Pikachu excels is the tone and realism of Pokémon interacting with humans, as the VFX are stunning, particularly when they’re in their natural habitat. Seeing a Bulbasaur frolicking through the woodland, or watching Squirtles put out a fire, truly make this distinctive world feel alive.

Against my expectations, this is a surprisingly enjoyable adaptation of a video game. Letterman finds a good balance between making a realistic Pokémon-human world but never straying too far from the source material. Occasionally the narrative lags and the script can feel like it’s pandering to older audiences, however. The attention to detail will please Pokémon nerds, while the humour and heartfelt messages will satisfy parents taking their kids to the cinema.