Ridley Scott’s Blade Runner is widely considered one of the finest pieces of science fiction cinema, but in 1982 it was a box office flop. Critical reaction was mixed and audiences stayed away, meaning it only grossed $33 million from a $28 million budget. By the late-’80s it had gained a cult following on VHS (more for its stylistic influence on the sci-fi genre), before being reappraised as an overlooked masterpiece thanks to 1992’s “Director’s Cut”.

Scott had some involvement with the Director’s Cut, but it was largely the work of film preservationist Michael Arick. The key difference between it and 1982’s theatrical release was the removal of the film noir-style voiceover from Deckard (Harrison Ford), which the actor infamously delivered with an intentional monotone. He disagreed with the studio that a voiceover was necessary, assuming his terrible readings would make them unusable. He was wrong. The recut also added a dream sequence of a unicorn—unused footage from Scott’s fantasy film Legend (1985) — which begged a new interpretation of the story and the nature of Deckard himself. 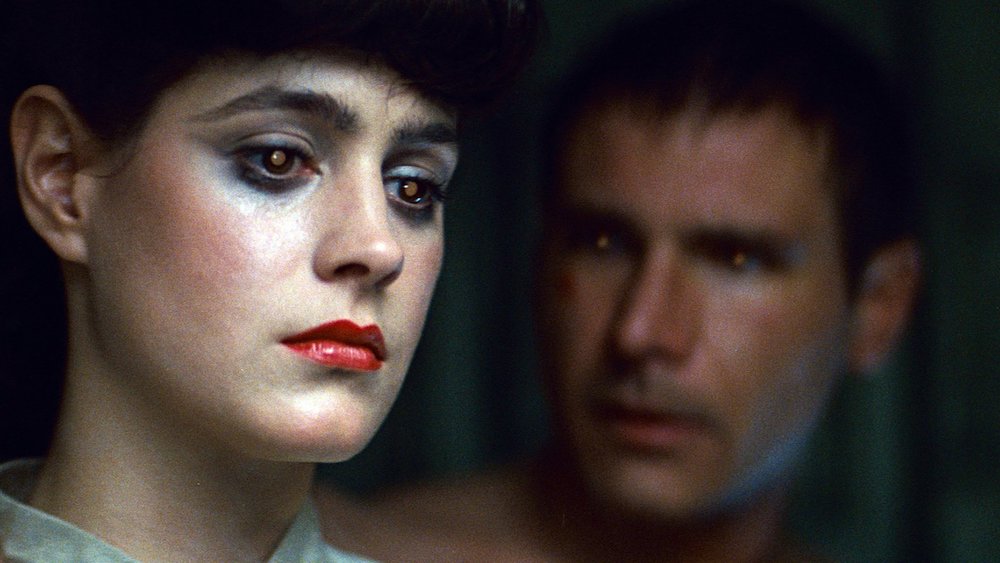 Suddenly, Blade Runner was a reevaluated triumph and basked in this belated acclaim throughout the 1990s, which was cemented when the “Final Cut” was released in 2007 to celebrate its 25th anniversary. Ridley Scott himself was given complete artistic control over a digitally remastered and re-edited Blade Runner, which kept many of the Arick’s changes, and has since become the definitive version in most people’s minds. Although there’s always debate about the logic of the aforementioned unicorn dream sequence, for reason’s we’ll get into…

My personal thoughts on Blade Runner are complicated, because the film was released when I’d only just learned to walk. I don’t have that deeply held affection you sometimes get with movies you saw, loved, and championed to anyone who’d listen growing up. I don’t even remember hearing about it until the late-1980s. There were other more exciting sci-fi adventures for kids my age to enjoy, and the presence of Harrison Ford always gave me the wrong impression Blade Runner was similar to Star Wars and Indiana Jones. This is quite possibly a deciding factor for why Blade Runner wasn’t a hit in ’82, as Ford was still very much associated with crowd-pleasing films and not arthouse sci-fi. 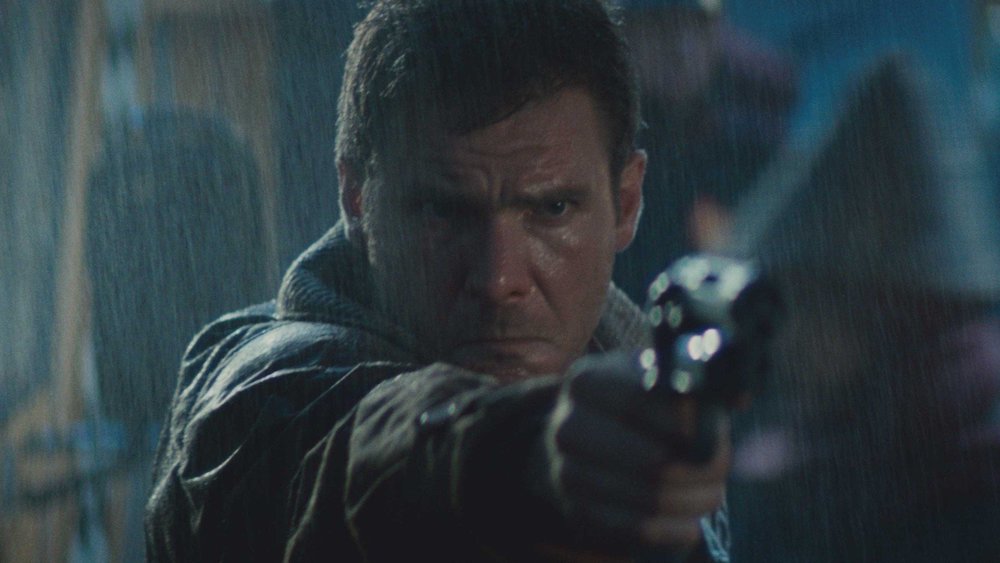 I was never a huge fan of Blade Runner after I’d seen it. I thought it was terribly slow, emotionally distant, clumsily told, and nowhere near as thought-provoking as it ought to be. But I grew to appreciate its designs and the atmosphere its coats the audience in. But by the time the Final Cut was released in ’07 I understood why Blade Runner was regarded so highly.

It’s barely dated all these decades later, even though its “future” of 2019 is tantalisingly close, and the F/X work vy Douglas Trumbull and Richard Yuricich (who worked on 2001: A Space Odyssey) is astonishingly good for the time. The story adapts Philip K. Dick’s “Do Androids Dream of Electric Sheep?”, who died shortly before its release, but the renowned author gave a positive appraisal of the screenplay and lavished praised on the visual effects he saw in post-production. I think he’d have loved the finished product, which started a run of PKD adaptations on the big screen.

The movie concerns ex-cop Rick Deckard, a so-called ‘blade runner’ working in L.A, whose job is to execute (or “retire”) bio-engineered humanoids known as replicants. These beings are used off-world as slaves because of their superior strength and stamina, but when four such replicants break free and arrive on Earth, Deckard’s tasked with finding those runaway ‘Nexus-6’ models: Roy Batty (Rutger Hauer), Leon (Brion James), Pris (Daryl Hannah) and Zhora (Joanna Cassidy). Along the way, Deckard meets with the replicant’s eccentric creator, Dr. Eldon Tyrell (Joe Turkel), and falls in love with this genius’s latest creation: Rachael (Sean Young), a replicant implanted with someone else’s memories who believes she’s human.

Criticisms of Blade Runner include how the plot is very thin, the pace is too laid back, and Deckard himself isn’t very engaging. It’s hard to argue those points, and they were indeed reasons the movie never spoke to me when I was younger. Deckard’s investigation is difficult to get invested in, or excited by, as there’s only one memorable piece of detective work involving the discovery of a fish scale he realises actually belongs to a snake. The fugitive replicants also intend to extend their four-year life spans, but seem to take an ordinate amount of time realising that the obvious person who can help them is their creator, Dr. Tyrell. 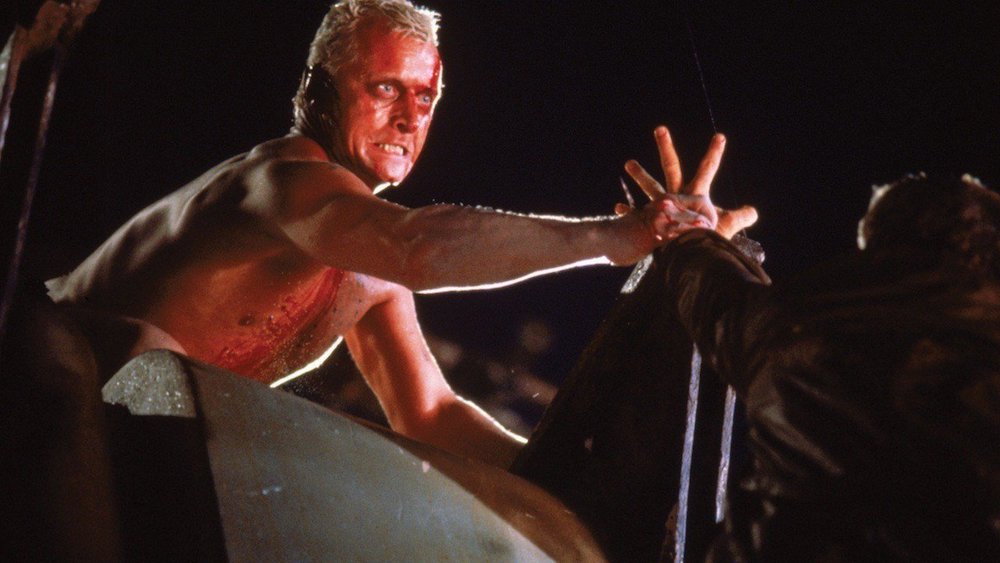 A lot of fans counter that Deckard is cynical and dull because the Director’s Cut and Final Cut make it seem likely he’s a replicant himself, implanted with false memories, and ironically tasked with catching his own kind. The debate continues to rage over this, but while it’s a cool twist that got everyone talking in ‘92, it makes a mockery of the character and how he grows to realise replicants deserve our love, respect, and understanding. It’s also unexplained why he’s the only replicant without superhuman abilities, as extra strength and stamina those would be particularly useful qualities for someone employed to catch replicants! The logic of the twist doesn’t withstand much levelheaded scrutiny, but people love a good twist, and certainly one that excuses Ford’s soporific performance. But seriously, the heart of Deckard’s love story with Rachael is fundamentally ruined if they’re both replicants.

One benefit of the characters having simple arcs is there’s more time for Ridley Scott to noodle around in this cityscape dystopia. He’s one of the greatest directors in terms of putting together believable imaginary worlds. Blade Runner is an early example of that, but arguably a vision he’s never improved on. A lot of the plaudits deserve to be shared, of course, as the aforementioned Trumball and Yuricich did sterling work in a pre-digital age to bring a future L.A to life.

But there’s also the fine work of Oscar-nominated cinematographer Jordan Cronenweth (Altered States), production designer Lawrence G. Paull, and art director David Snyder. Scott wasn’t merely the ringmaster of these talents, however. A lot of his own sketches and ideas drove the whole look of the movie. He was heavily inspired by the look of Fritz Lang’s classic movie Metropolis (1927), French sci-fi comic Métal Hurlant (which contained lots of drawings by Mœbius), and the industrial northeast of England where he grew up (also a reference for his equally gritty Alien). 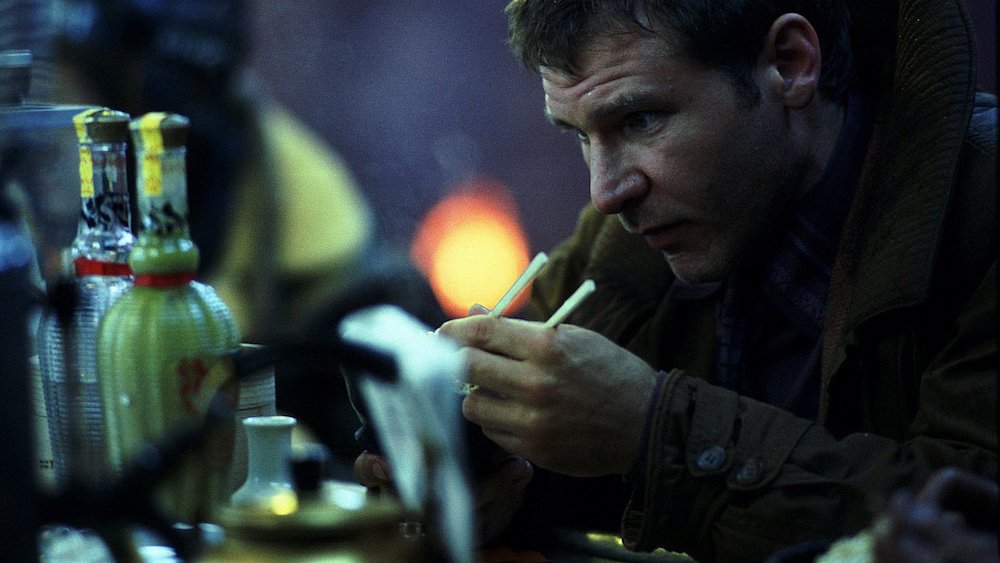 I still think Blade Runner works best as an extended mood piece, helped enormously by the excellent music score from Vangelis (whom Scott worked with again on 1492: Conquest of Paradise). Its look and ambience continues to be something you can get lost in. 35 years later, Blade Runner even has the added charm of its retro ‘80s-ness peeking out from underneath this high-tech world. You can pick fault at the futurism it got wrong (an indoor antennae sits on a portable TV, people don’t communicate using portable devices), but its vision of impossibly tall skyscrapers, enormous digital billboards, and heavy downpours through harsh neon lighting has become the go-to reference point for grim dystopian cinema. Increasingly, modern cities are resembling what Blade Runner, particularly in developing countries like China. One can’t discount the possibility architects took inspiration from this movie, and it’s thus helped build the 21st-century it was predicting.

But while I have conflicting thoughts on Blade Runner in terms of its characterisations and narrative, this is still bravura filmmaking that hasn’t been forgotten for a reason. I often return to the mesmerising sequence where a bare-chested Ray Batty fights Deckard (toying with him like a cat would a mouse), before the scene dovetails into one of the greatest moments in movie sci-fi: the melancholy “tears in rain” speech about the ephemeral nature of life itself. The story goes that Rutger Hauer wrote himself this dialogue the night before filming took place, and Scott only agreed to shoot it to keep his actor happy. I don’t know if that’s true, you’d have to ask the writers, but it’s certainly the defining moment of the film for me.

Maybe Blade Runner’s intentionally cold and inscrutable, prone to keeping audiences at the distance of scholarly respect, but in Rutger Hauer’s signature moment a shining ray of humanity comes pouring into the story from out of nowhere… opening Deckard’s eyes… our hearts… before it hits you why this movie’s a modern classic.

THE UNBEARABLE WEIGHT OF MASSIVE TALENT (2022)