If you grew up in the ’90s, there’s a good chance R. L. Stine’s Goosebumps books were one of your formative forays into fiction. A series of very accessible mild horror novels, his stories were renowned for their sense of humour and notorious for their twists. They were many children’s window into not just reading, but also the horror/fantasy genre itself. But even if you’ve never cracked open the pages of a Goosebumps, there’s still plenty to enjoy in this lively and knowing big-screen adventure inspired by its tales.

The plot sees Zach (Dylan Minnette) and his mother (Amy Ryan) move to a new town to start afresh after the death of Zach’s father. Zach immediately befriends amiable loner Champ (Ryan Lee), then catches the eye of his new neighbour Hannah (Odeya Rush)—who happens to be the daughter of renowned horror scribe R.L Stine (Jack Black). It’s not long before it emerges that Stine’s overprotective nature isn’t just about keeping his home-schooled daughter safe from the world of boys, but rather more to do with keeping his Goosebumps manuscripts under lock and key. 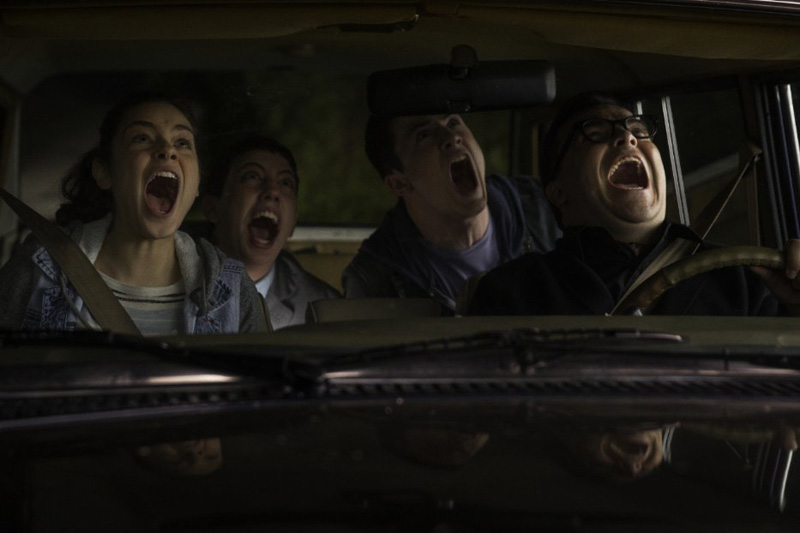 Due to vaguely defined supernatural reasons, Stine’s special typewriter has led to his imaginary creations coming to life. Thankfully, they remain trapped inside the pages of his original typewritten pages, and as long as nobody opens them, there’s no problem. Can you guess what happens next? Unfortunately for Zach, it’s “Night of the Living Dummy” that he inadvertently opens, releasing perhaps the franchise’s most famous villain: Slappy the ventriloquist’s dummy. The wooden creep’s tired of being trapped within the pages of Stine’s work, and takes it upon himself to liberate the rest all the others ghouls and monsters, who proceed to wreak havoc across town. With Slappy cleverly burning the original manuscripts, it’s up to Stine to write a new story: one last thriller that puts his nightmarish creations back in their cage. 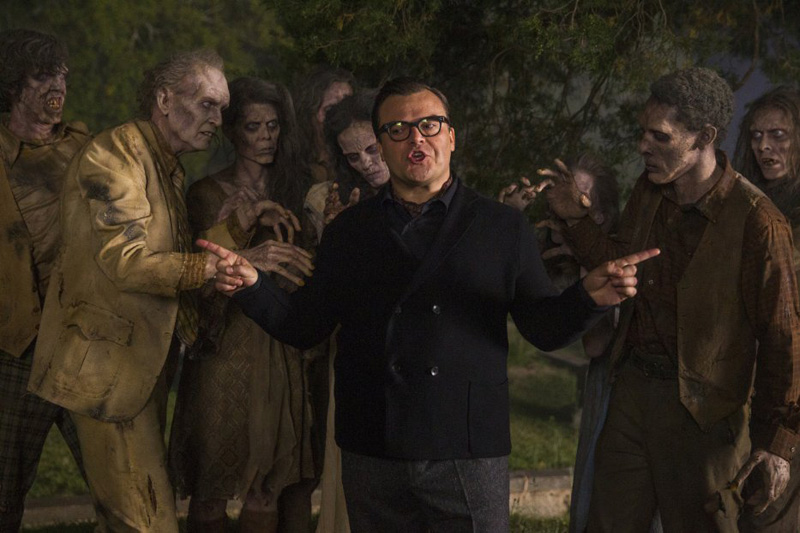 As the heroic Zach, Minnette makes for a very capable and personable protagonist, and has good chemistry with his love-interest Rush, even if her character Hannah is slightly underdeveloped. Ryan Lee’s Champ is something of a more mixed bag (think a younger McLovin), but manages to stay just the right side of annoying, although the film completely wastes Ken Marino’s Coach Carr in a half-baked subplot with Ryan that feels heavily edited. As for Jack Black, he goes through the motions affably enough as this paranoid version of R.L Stine, but thankfully gets to cut loose and have far more fun voicing the villainous Slappy. 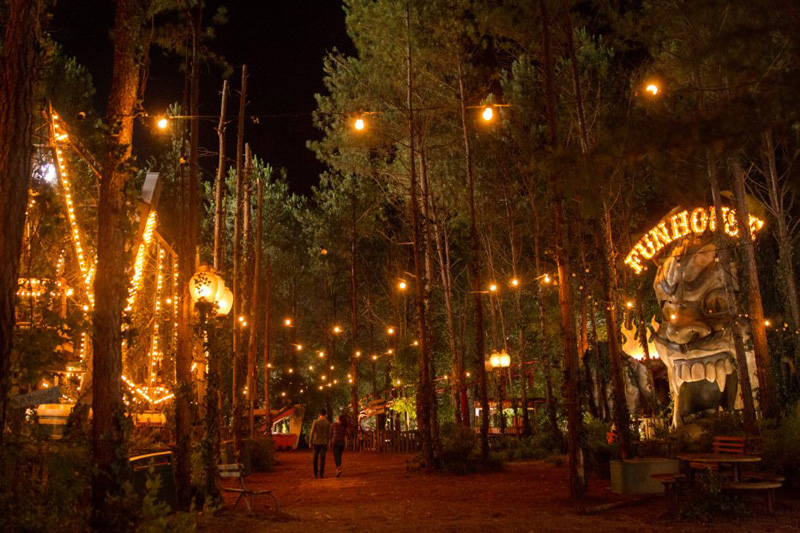 Directed by Rob Letterman, Goosebumps is a lively adventure that maintains a sense of spooky fun and energy. It rattles along in a manner that makes it perfect matinee fare. What’s most surprising is the way Letterman’s film attempts to inject added substance into proceedings. Slappy the Dummy and Stine, for example, are drawn as mirrors of one another; the former existing as a result of all the disaffection and anger his human creator poured into his writing during an unhappy childhood. Of course, it’s fun having Jack Black perform both roles, but there’s also a genuine attempt at something deeper at play, with Stine literally facing his own dark side. Similarly, an unexpected reveal halfway through the film lends the latter half an unexpected level of emotional complexity for what might’ve been a popcorn rollercoaster.

In true Goosebumps style, the actual plot doesn’t really stand up to scrutiny, but there are fun meta moments like Stine’s complex about being compared to Stephen King. Darren Lemke’s screenplay perhaps should have offered even more self-referencing fun: at one point amid the chaos, our heroes—all savvy and aware of Stine’s oeuvre—decide to take a shortcut through a graveyard, to which nobody objects. Are these kids aware that they’re in a Goosebumps film, or not? It’s all well and good throwing nods and winks to the audience, but some consistency wouldn’t go amiss. 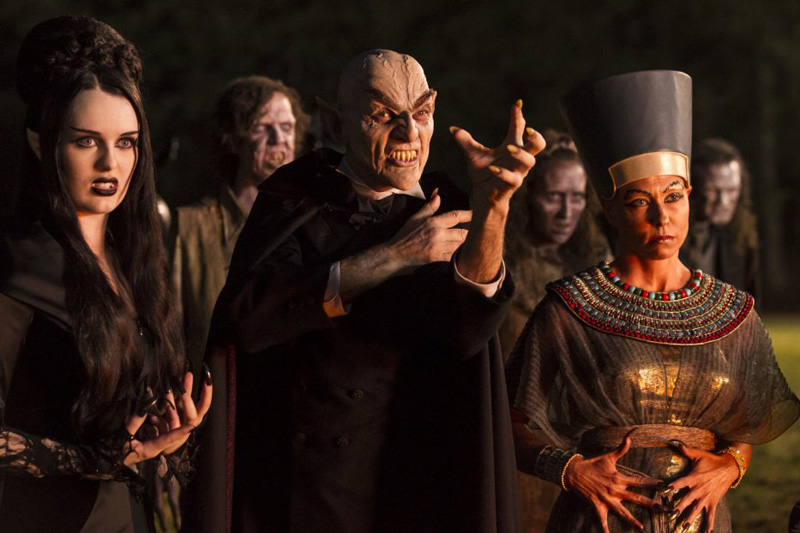 It’s also a shame more of the creatures from the books couldn’t be featured more heavily (no Monster Blood? Seriously?!), but seeing Slappy, the Abominable Snowman, the Werewolf of Fever Swamp, et al, come to life is an undeniable treat for reasders, and the vibrant CGI ensures this menacing menagerie is very pleasing to gawp at. The end credits are a treat, too, taking some of the book’s most iconic original artwork and animating it wonderfully—so wonderfully, in fact, that if an animated Goosebumps series isn’t commissioned immediately, it’ll be an outrage.

At the end of the day, amid all the giant blobs and evil garden gnomes, Goosebumps is actually about the value of books and stories. It’s about how writing can be a coping mechanism in tough times; how reading provides an escape from the horrors of reality, even if it involves horrors of another kind. It’s about how books and stories can create worlds and people (and giant praying mantises) that can be just as tangible and important and affecting as anything physically real. And if Goosebumps as a film can inspire the same creativity and passion for reading and writing that the original books managed, then more power to it. Goosebumps is a film where storytelling is the real hero, and who wouldn’t cheer for that?

writer: Darren Lemke (story by Scott Alexander & Larry Karaszewski, based on the books by R.L. Stine).