In The Big Clock, George Stroud (Ray Milland) is a charismatic crime magazine editor trapped in an oppressive publishing corporation micromanaged by the domineering owner, Earl Janoth (Charles Laughton). Stroud is overworked and under-appreciated, and when Janoth tries to get him to postpone his already five-years-postponed honeymoon once again, he understandably quits.

Stroud drowns his sorrows by going out for a few drinks with Pauline York, the woman Janoth gives money to for “singing lessons” (wink-wink, nudge-nudge), and who has her own reasons to try and recruit an ally from inside the company. Later that night, when York refuses to identify her drinking buddy, Janoth beats her to death in a jealous rage. Hoping to pin the crime on the mystery man he gives Stroud the opportunity to take his job back by giving him the task of finding him. In a desperate effort to save his own skin, Stroud accepts the assignment, attempting both to keep his team off his scent and find the evidence needed to prove Janoth’s guilt. 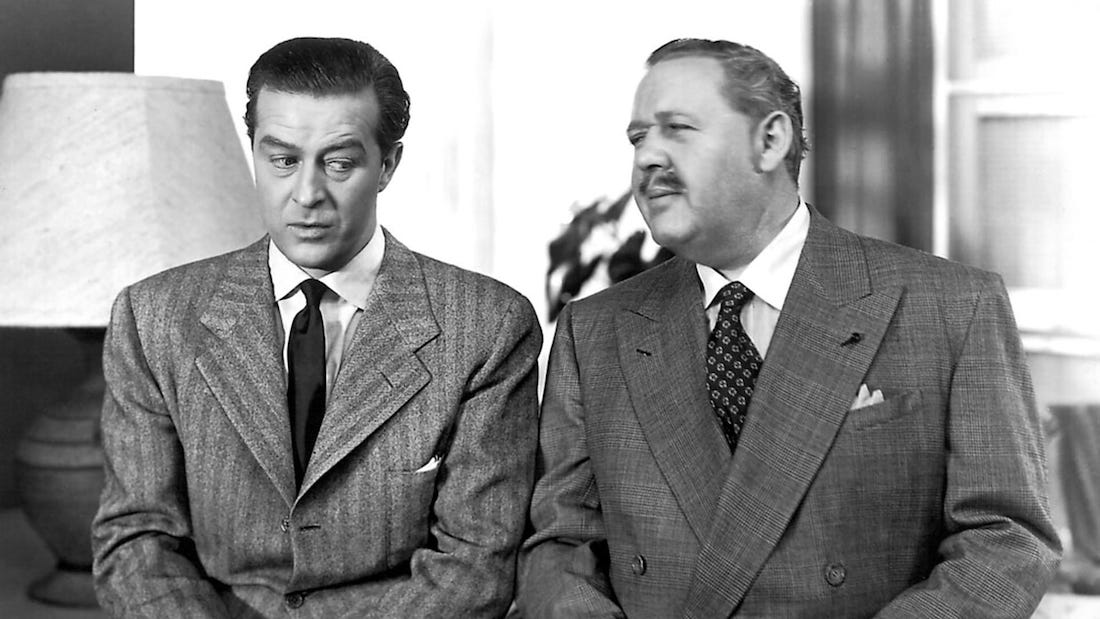 This neat premise is taken directly from the novel by Kenneth Fearing, and it’s easy to see why The Big Clock’s pitch appealed to Paramount Pictures: a man is hired to find himself. To make the most of it they hired renowned novelist and screenwriter Jonathan Latimer to write the screenplay, believing they had all the elements in place for a classic film noir. But, however snappy the premise is, it runs out of steam pretty quickly. It’s difficult to milk tension from a man repeatedly sabotaging the investigation he’s running and having to hide in cupboards to avoid witnesses, which is a problem that also maligned the adaptation No Way Out (1987) starring Kevin Costner and Gene Hackman.

Laughton hams it up wonderfully as Janoth, exaggerating the grotesque villainy of the super-rich, all-powerful businessman. The way his normally placid face twitches and contorts as York riles him up is repugnant and warns of the violence about to explode from him. Janoth is a man who counts every second as valuable time:

There are twenty-two million seventy-five thousand seconds in the average man’s life, each tick of the clock the beat of a heart, and yet you sit here uselessly ticking your lives away because certain members of our conference are not on schedule. 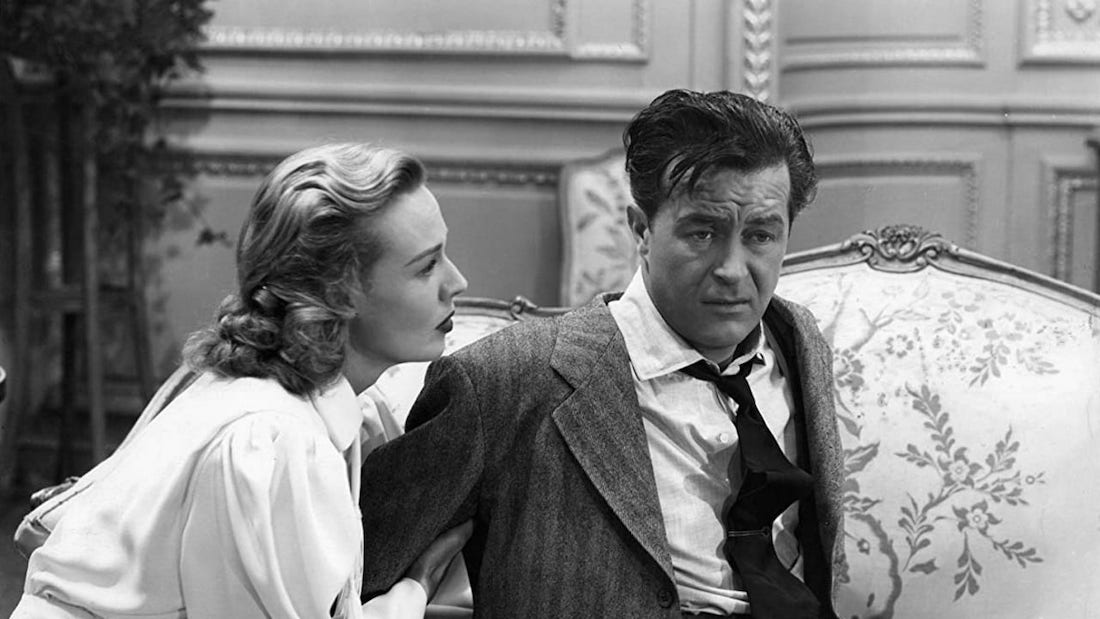 He runs the company like he runs the giant clock in the lobby, his employees simply cogs to be turned. He governs whether or not people can speak to the lift operators, and he listens in to people’s private conversations via hidden microphones. If someone makes a mistake they are fired on the spot, and when he orders that a janitor’s pay be docked because of a lightbulb that has been left on in a cupboard we know he is that old Hollywood favourite: the caricature Evil Businessman™ (Or is he? After all, Jean Paul Getty had a pay phone installed in his manor house). Janoth is a powerful man who pays to use women and then disposes of them when they displease him, believing that he has every right to get away with his crimes. Thank heavens those types of people no longer exist or, at least, are no longer in positions of power, right?

Although Fearing’s work is, on the surface, a noir, he was primarily a poet, and his novel is more concerned with making a political statement on the capitalist ideal of efficiency and its human cost. Everyone is just a cog in “the big clock”. In the film, this is translated into the almost Metropolis-like matte-painted sets and the offices of the indistinguishable publications that populate them. This stagey and allegorical feel is added to by its lack of genuine exteriors and the fact that the two main characters in this New York publishing house have British accents. 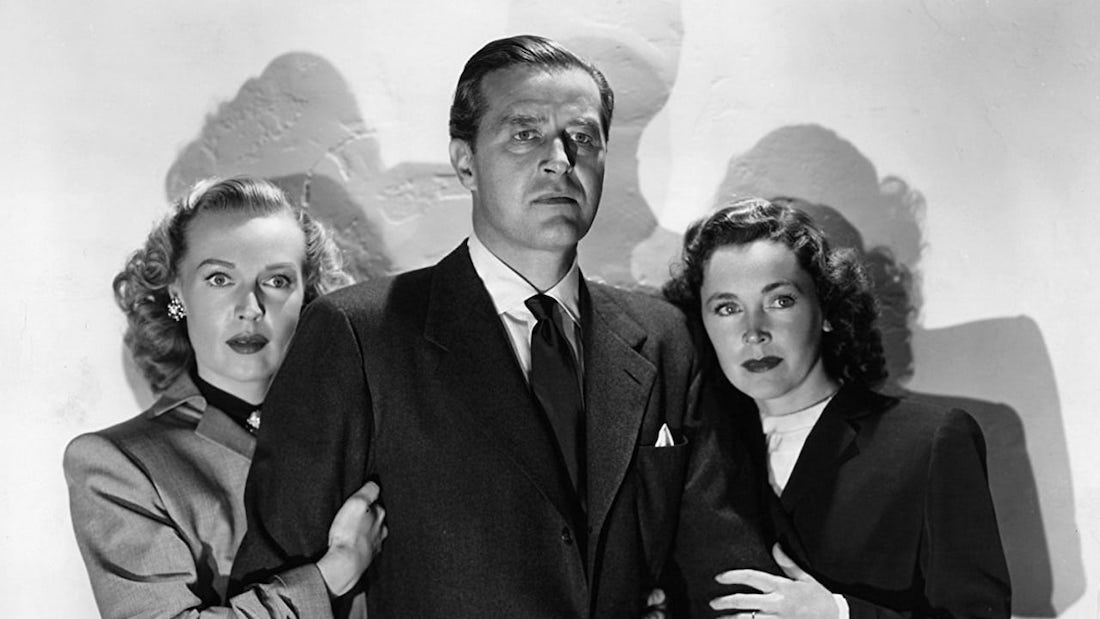 Ultimately, it’s Fearing’s politics that make Janoth such a repulsive, grotesque, and finally memorable and compelling character. Sadly, the same cannot be said for Stroud. In the novel, he is a former dog track detective and bar owner, and crucially he does have an affair with Janoth’s mistress, which gives the novel that murky noir morality. Perhaps to please the censors, in the movie he’s a straight-arrow family man desperately trying to do right by his pure and faithful wife and irritatingly adorable son.

As Stroud’s wife, Maureen O’Sullivan is given the least to do; and as the mistress, Rita Johnson does very little other than play conniving. In fact, the only woman given a decent role is Elsa Lanchester (Laughton’s real-life wife and well known as the eponymous Bride of Frankenstein), who plays an eccentric artist and crucial witness. Lanchester should have been given far more screen time because every line she drawls crackles with electricity, right from her introduction:

John Farrow’s direction is competent, starting wonderfully but then dropping all stylistic flourishes for the remainder of the film. This, along with the limits of the premise, renders the 96-minute runtime one reel too long. The Big Clock is therefore not a classic noir, but the evils of Laughton’s Janoth deserve to live long in the memory. 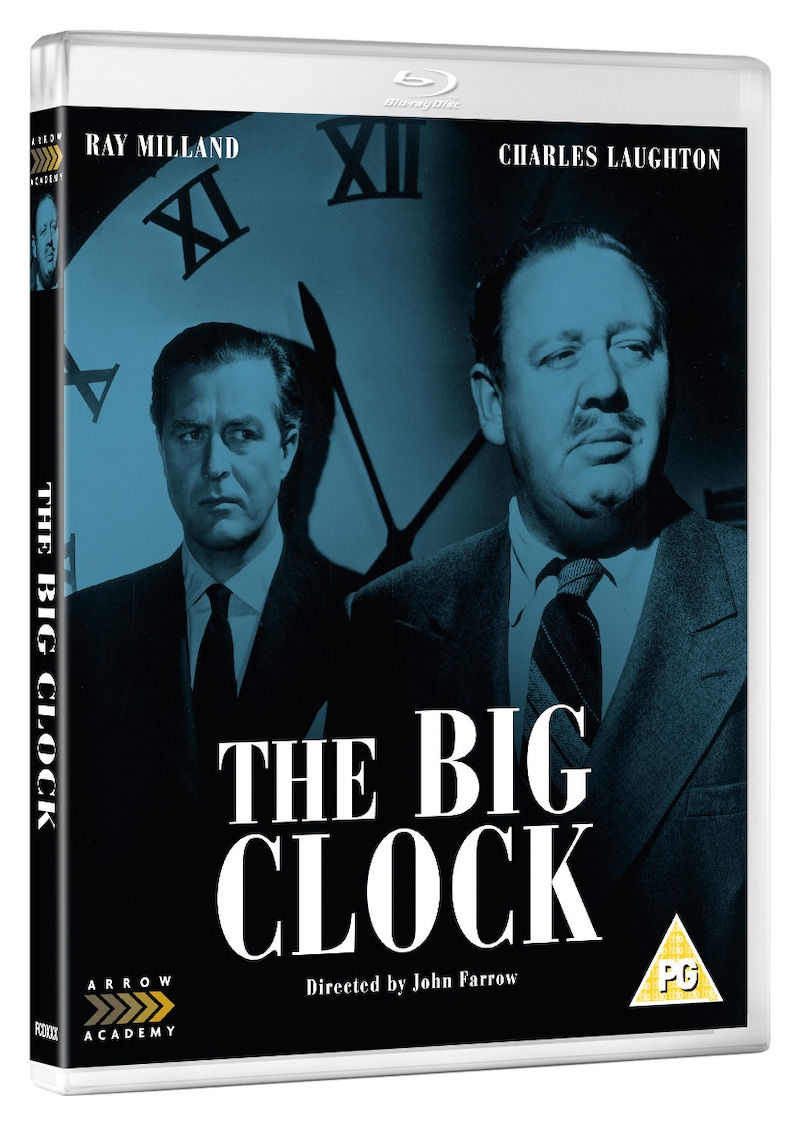 This release from Arrow Academy has grain and scratches, but nothing that could not be expected from a print of a film largely forgotten. The extras include a new commentary by the academic Adrian Martin, the always amusing curio of a radio adaptation, an interview with Simon Callow where he places Laughton’s performance in the context of his career, and an illuminating critical analysis by the critic and chief executive of Film London, Adrian Wootton. Analyses such as these are always a welcome addition to any release and serve the same function as the introduction by an academic or author at the front of a classic book. Plus it’s always a pleasure to watch a smart person talking incisively about the film you just watched. And, last but not least, a special treat for all of us who still take pride in owning films on physical media: a reversible sleeve featuring two different choices of artwork for your Blu-ray shelf.