George A. Romero is an all-time giant of horror. A skilled and storied director, he’s most famous for creating the modern zombie in his classic debut Night of the Living Dead (1968). Later going on to make two other entries in his Dead trilogy, he changed the face of horror and set a precedent for the work of the likes of Tobe Hooper (The Texas Chain Saw Massacre), Wes Craven (A Nightmare On Elm Street) and John Carpenter (Halloween).

Many filmmakers emerging in the 1970s wanted to adapt a Stephen King novel. Brian De Palma gave us Carrie (1976) and Tobe Hooper turned ‘Salem’s Lot (1979) into a two-part TV miniseries. When Romero and King first collaborated on Creepshow (1982), it was a huge hit, and 11 years later the two masters of horror reunited for The Dark Half. 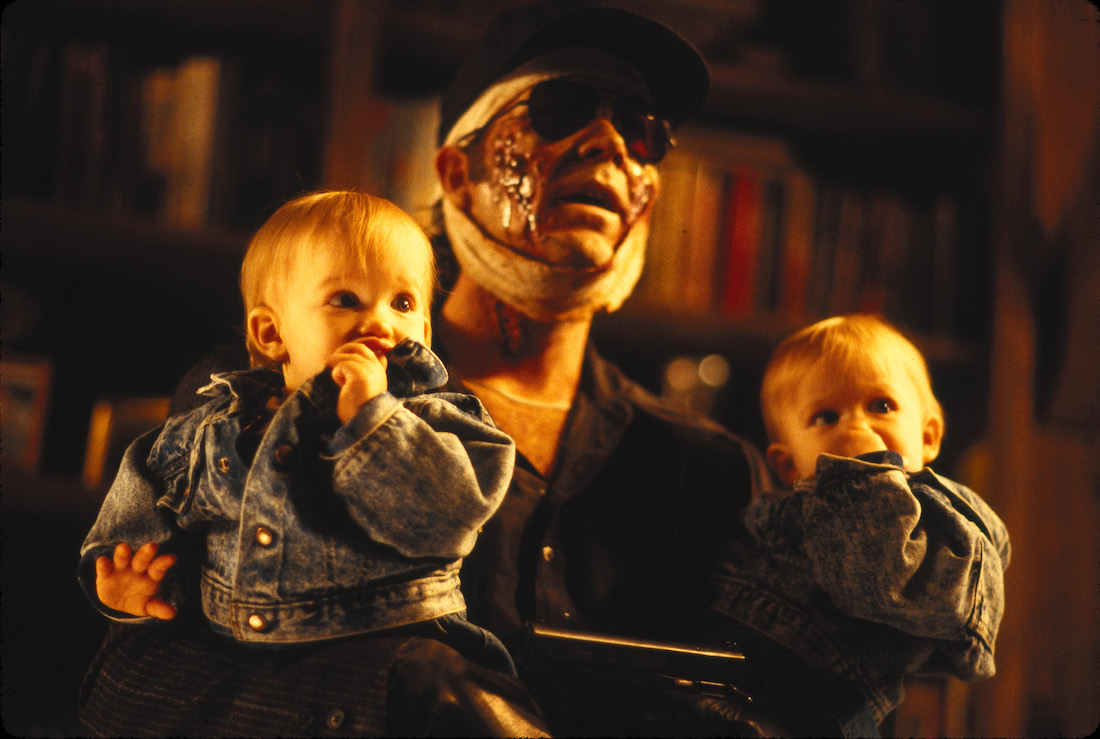 In order to contextualise Romero’s The Dark Half, the background King’s pseudonym must first be explained. In the late-’70s and early-1980s, King wrote the novels Rage (1977), The Long Walk (1979), Roadwork (1981), The Running Man (1982), and Thinner (1984) under the pen name ‘Richard Bachman’. Shortly after the release of Thinner, Bachman was exposed as King’s pseudonym by a bookshop owner who noticed the similarities between the two author’s writing styles. An interview was promptly published in The Washington Post with King announced Bachman’s death from “cancer of the pseudonym.”

In The Dark Half itself, horror author Thad Beaumont (Timothy Hutton) wants to distance himself from his murder novels and ‘George Stark’, a pseudonym name he used to write them. To achieve this aim, he cooks up a murder of his own: a publicity stunt that should lay Stark to rest forever. But when people around him are found gruesomely murdered, with his own fingerprints dotted around the crime scenes, he’s completely dumbfounded. That is until he begins to learn that Stark has come to life and begun a macabre quest for vengeance.

The performance from Academy Award-winner Timothy Hutton (Ordinary People) is particularly good as troubled writer Thad. A version of Dr Jekyll and Mr Hyde, he’s a loving husband and devoted father… but with a hint of evil in his eyes. Plagued by visions and nightmares, Hutton’s demonic alter-ego is one George Stark, who resembles an evil Elvis Presley, spending his time ruthlessly torturing people with razorblades or bullying the weak. 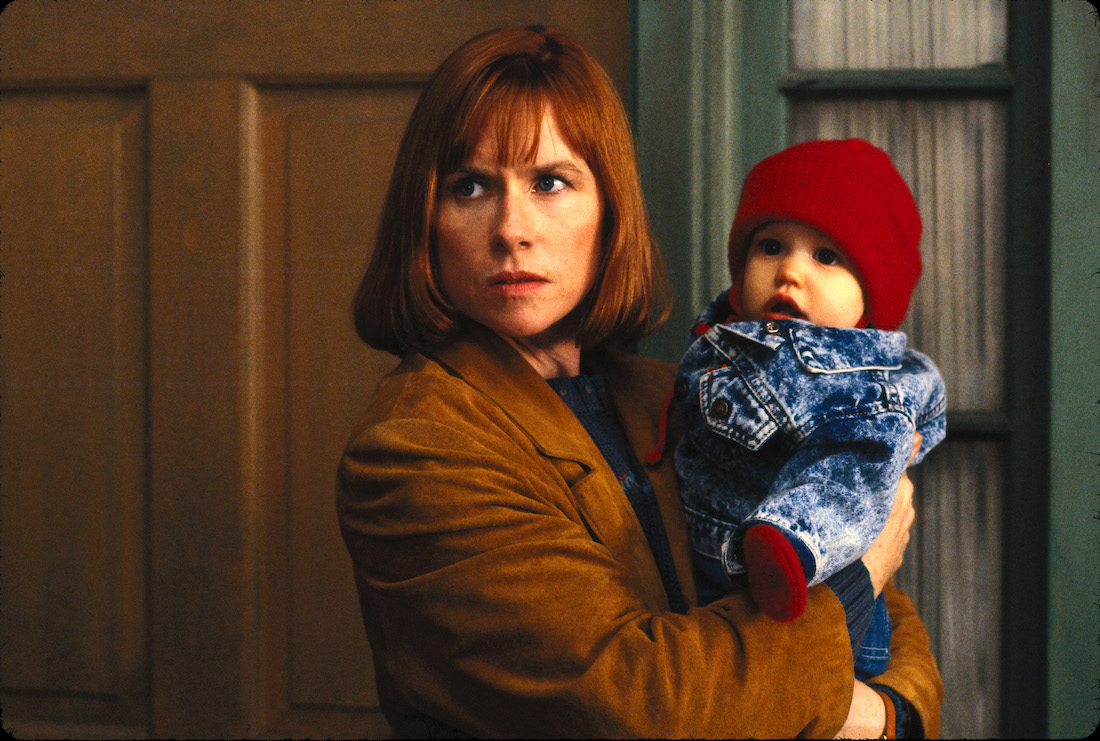 In twin roles, Hutton digs deeper into the characters than was necessary and this makes his performance so indelible. With only a few cosmetic changes (slicked back hair, stubble, a gravelly voice) he becomes a completely different person. Whenever he’s on-screen as Stark, Hutton has the energy of a young Michael Keaton (Batman) and the brooding toughness of Mickey Rourke (Angel Heart). The two roles are so dissimilar it’s unbelievable that it’s Hutton depicting them both.

The rest of the cast throw themselves into the movie to great effect, but none leaves a lasting impression like Hutton. Michael Rooker wanted to distance himself from the image that shadowed his career after giving such a chilling performance in Henry: Portrait of a Serial Killer (1986), so here he portrays the same character Ed Harris did in Needful Things (1993): King’s recurring sheriff Alan Pangborn. Wrestling with a typical good guy role, Pangborn’s a conflicted friend of Thad and also the man investigating all the murders. But although Pangborn’s given a considerable amount of screen time, the character feels like an afterthought. 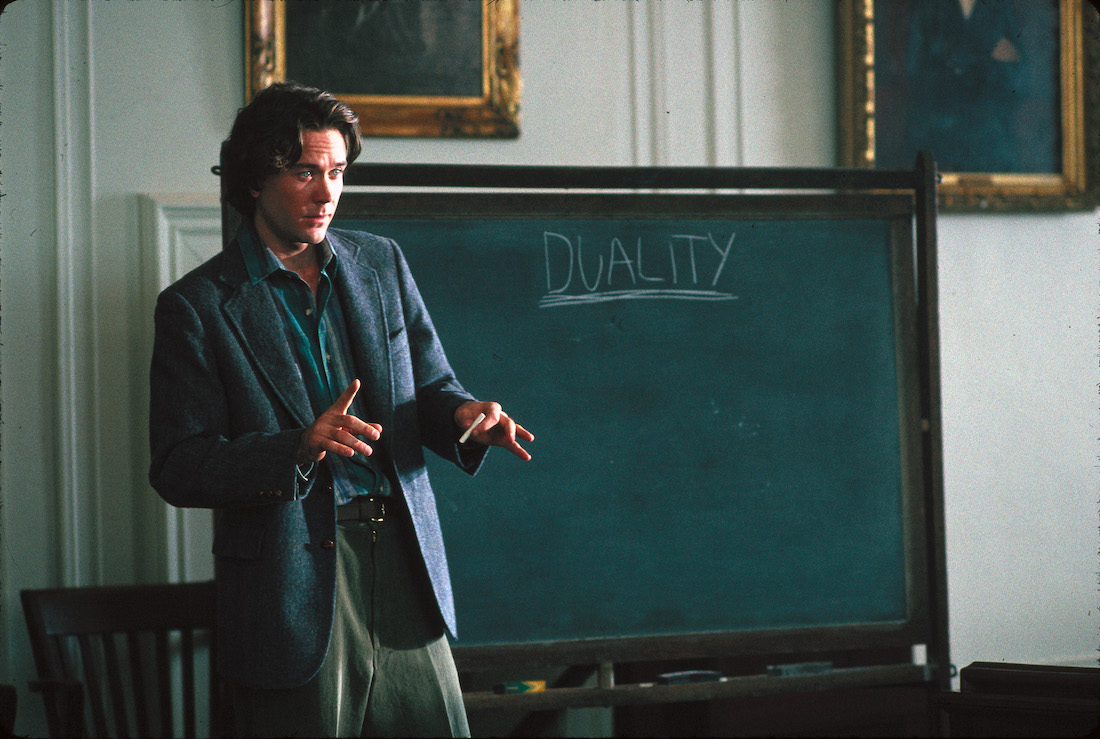 We also have Amy Madigan (Field of Dreams) as Thad’s wife Liz Beaumont. She makes the most of what she has to work with, but her lack of chemistry with Hutton and any real dimension to Liz renders her performance inert. She doesn’t even have much to do until the last act.

The story treads familiar ground for King: the concept of a child growing up to confront his old fears, and a self-destructive writer… both elements explored numerous times in the author’s oeuvre, but most notably The Shining (1980) and Misery (1990). I’d describe The Dark Half as a mix of Secret Window (2004) and Alfred Hitchcock’s The Birds (1963), but while it’s not terribly exciting, it’s still a well-made thriller. Thanks to Romero’s deft hand from behind the camera, it’s visually pleasing and on par with his work in Day of the Dead (1985). There’s a constant sense of dread from the opening sequence and the unnerving ambience plays with your mind.

On the surface, The Dark Half can be described as a supernatural thriller, but it fits more comfortably within the psychological horror genre. Thanks to a well-written screenplay by Romero, it’s an intelligent film based on the embodiment of inner guilt and pain, leading to the hatred and violence that often arises from denying such emotions. Similarly to Stanley Kubrick’s The Shining, Romero uses his own filmmaking strengths to bring out the best of King’s source material. It’s not a perfect adaptation but I appreciated the little details, such as Stark being left-handed while Thad is right-handed. 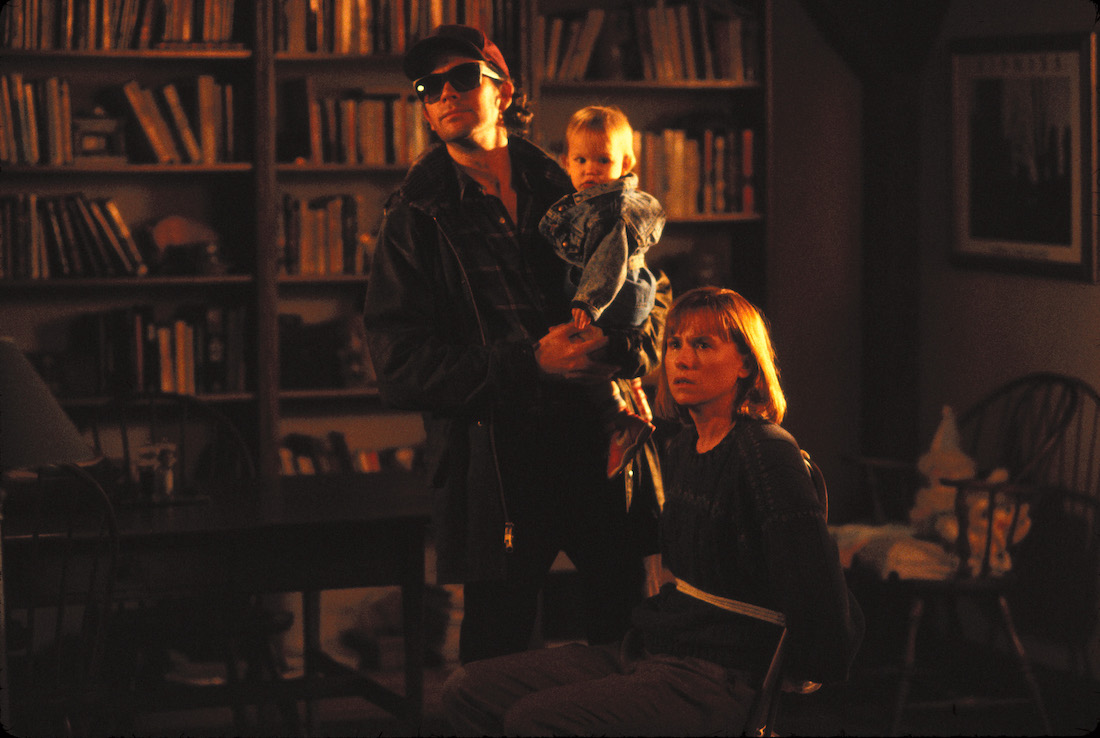 Comparing this to another King adaptation, The Dark Half has trace elements found in The Dead Zone (1983). It’s less subtle and more demonic, but they share similar pacing and atmosphere. The unforgettable horrific opening sequence involving an eyeball and a brain evoked a David Cronenberg body-horror movie. There’s also a dream sequence with Thad wearing a mask of makeup that has the same surreal effect as the backwards dream in David Lynch’s Twin Peaks. Another horrific highlight includes a dream in which a doll’s face shatters to reveal a human skull. Or a moment when Thad’s trying to work out where Stark is and lets his subconscious take over his body, so a pencil is allowed to scrawl over a piece of paper while he goes into a trance that’s only broken when Stark fights back.

In places, The Dark Half sometimes feels like a giallo from Dario Argento (Suspiria), with so many vivid colours during a few of the set-pieces—particularly a scene where a photographer’s stalked through his apartment block. The use of sparrows as an omen is also striking, coupled with the creepy phrase “the sparrows are flying again.” 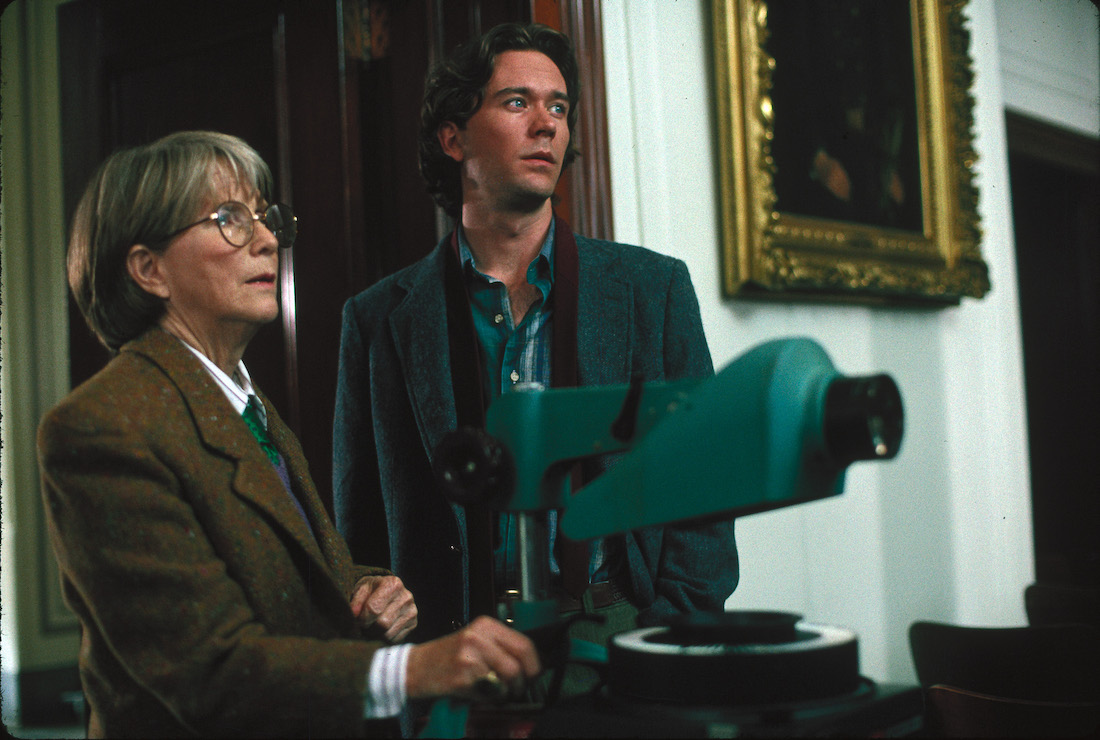 All of this wouldn’t work so well without the cinematography by Tony Pierce-Roberts’  (A Room With A View), whose approach works best when paired with Romero’s horror. The music by Christopher Young also compliments the artistic choices of the director, too, building on the composer’s previous experience scoring Hellraiser (1987). The music design as a whole is great, with a surreal use of Elvis Presley’s “Are You Lonesome Tonight?”. It’ll send shivers down your spine when you next hear it on the radio. If this kind of strangeness was more consistent, The Dark Half could have been sold as a feature-length episode of The Twilight Zone (1959-1964). Unfortunately, these bold choices slowly become less noticeable as Romero starts to concentrate on other aspects of the story.

Sadly, The Dark Half carries over one weakness of the book: the pacing. It’s easily a half-hour longer than it needed to be. Romero spends the first hour revealing Thad’s secret and the reasoning behind his pseudonym’s death. It can be argued that waiting a quarter of the runtime until the first dead body is discovered is fine storytelling, but thereafter Stark’s killing spree is too sporadic. His ultimate goal is to kill Thad, which raises questions about Stark’s character that are never answered. Due to this, once the big finale approaches, plenty of questions are left unanswered. 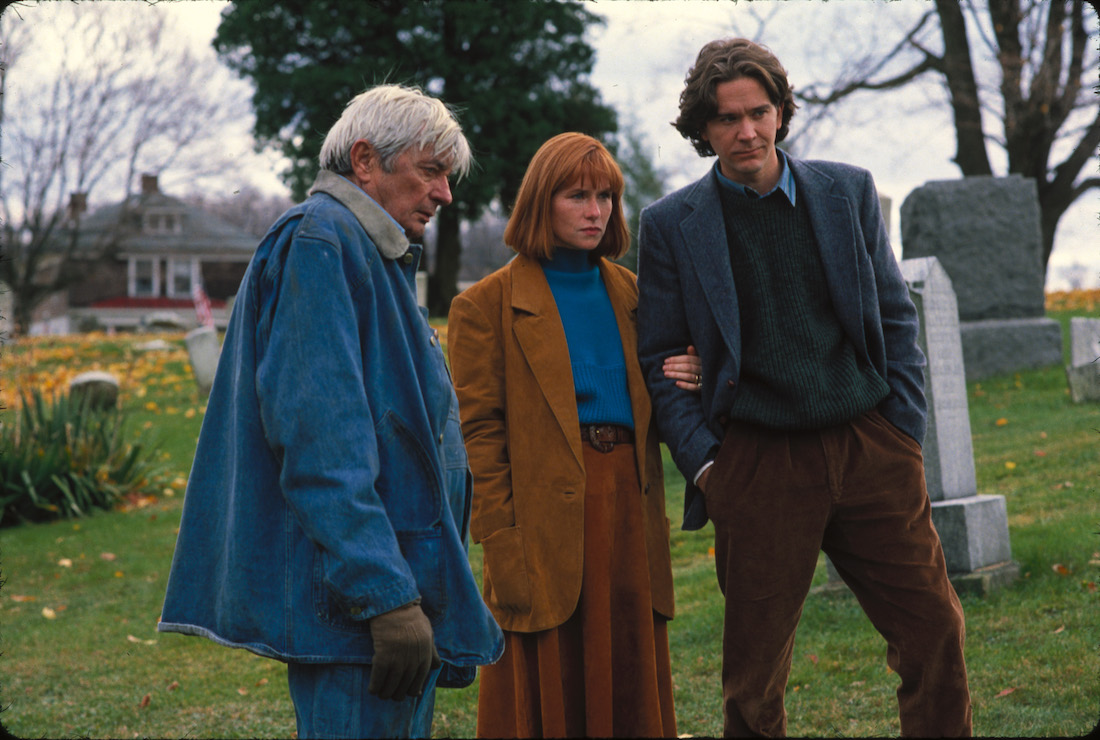 For the most part, Romero did a solid job adapting another King page-turner to the screen, although Stark’s tendency for witty phrases come across as cartoonish in live-action. In one scene, after Stark brutally murders a victim, a man asks “what’s going on?” to which he replies “murder… you want some?” It’s unclear if this was due Romero’s direction, or that creative differences between Romero and Hutton spilt onto the set.

The Dark Half might not be as enjoyable as Romero’s and King’s Creepshow, but it tops other adaptations such as Thinner (1996) and Dreamcatcher (2003). Bolstered by the direction of Romero, his aesthetic choices capture a dream-like logic similar to The Dead Zone. Straying away from the gore that one might expect after watching his Dead trilogy, Romero moves seamlessly into psychologic terror. Blessed with Hutton’s great performance, the director asks us to deal with our darker side and confront it. 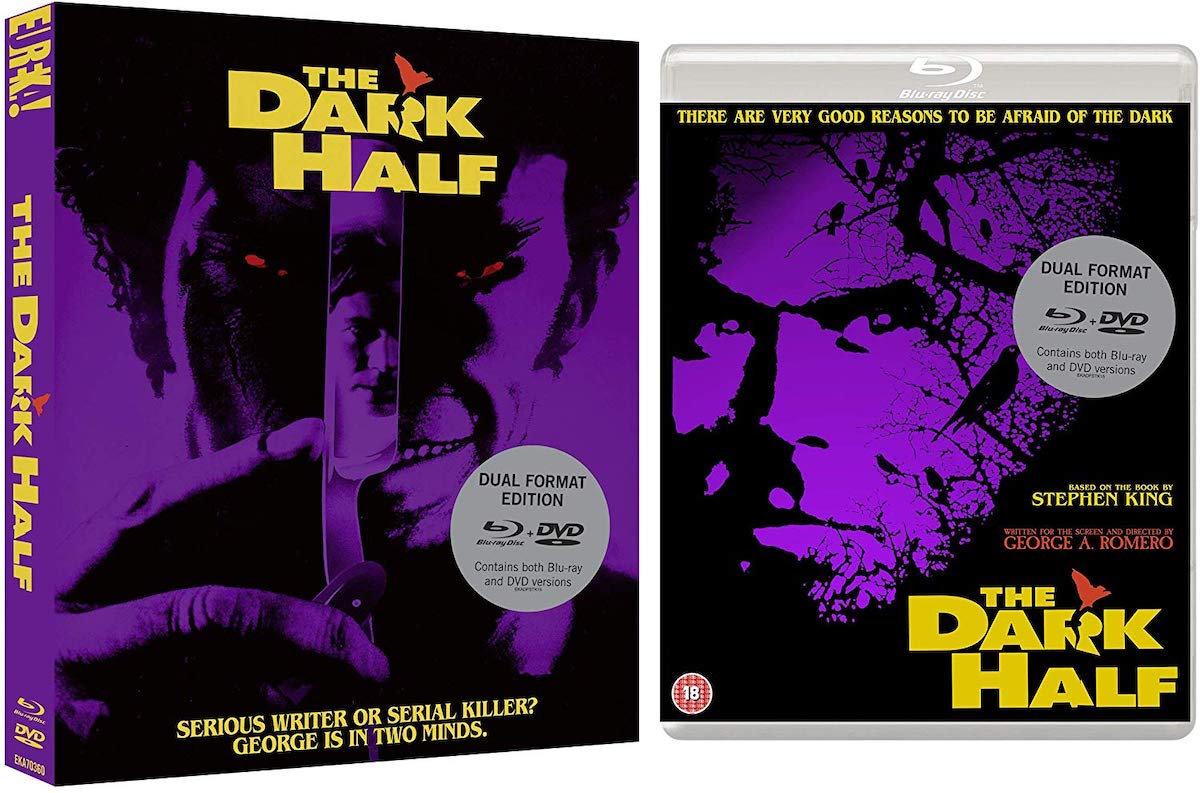 Eureka Entertainment delivers an exceptional 1080p transfer of The Dark Half with an apect ratio of 1:85:1. The majority of the original film source is strikingly clean, but the picture does occasionally show its age with issues such as dust and tiny scratches. But the image is mostly in great condition and shows excellent detail throughout. Colours are bold, blacks are deep, and depth is frequently stunning in daylight scenes. Close-ups revealing props such as pencils, text, pictures, etc, all have crisp detailed lines. The low budget VFX looked terrible upon release and this 2019 transfer doesn’t seem to improve matters much. A personal gripe of mine is how grain levels spike during optical sequences with sparrows flying.

Providing two optional audio options, Eureka presents The Dark Half with DTS-HD Master Audio 5.1 and an uncompressed LPCM track. Neither are spectacular but the dialogue is consistent and can be heard clearly. Offscreen sounds such as razor slicing, gunshots, and shattering glass help broaden the experience aurally. They’re well balanced between each channel, and the dynamic range is distinct. Using surround sound, the atmospheric tones from the rear channels expand the soundstage. Where the soundstage truly opens is when the score by Christopher Young takes centre stage. It may not have the most powerhouse soundtrack, but the audio mixes showcase the subtleties with assuredness and clarity.