Horror author Clive Barker made his directorial debut with Hellraiser, a terrifying adaptation of his 1986 novella The Hellbound Heart. Made for just shy of $1 million, it grossed $14m worldwide (that’s $30m adjusted for inflation), despite initially scathing reviews. It was perhaps too transgressive for the average filmgoer of the 1980s (a time when having your tongue piercing was considered risqué), but Hellraiser was also psychologically disturbing and visually daring.

In a decade littered with schlocky horror sequels and cheesy slashers, Hellraiser was the blackest of sheep.

Its boogieman ‘Pinhead’ (Doug Bradley) was quickly inducted into the Horror Hall of Fame. His popularity begat a slew of inferior sequels that are, remarkably and depressingly, still being produced today. The Hellraiser franchise has become a straight-to-video embarrassment (even stalwart Bradley came to realise bills don’t need paying that badly in 2005), but the saga’s nosedive shouldn’t detract from Barker’s gloriously perverse original offering. 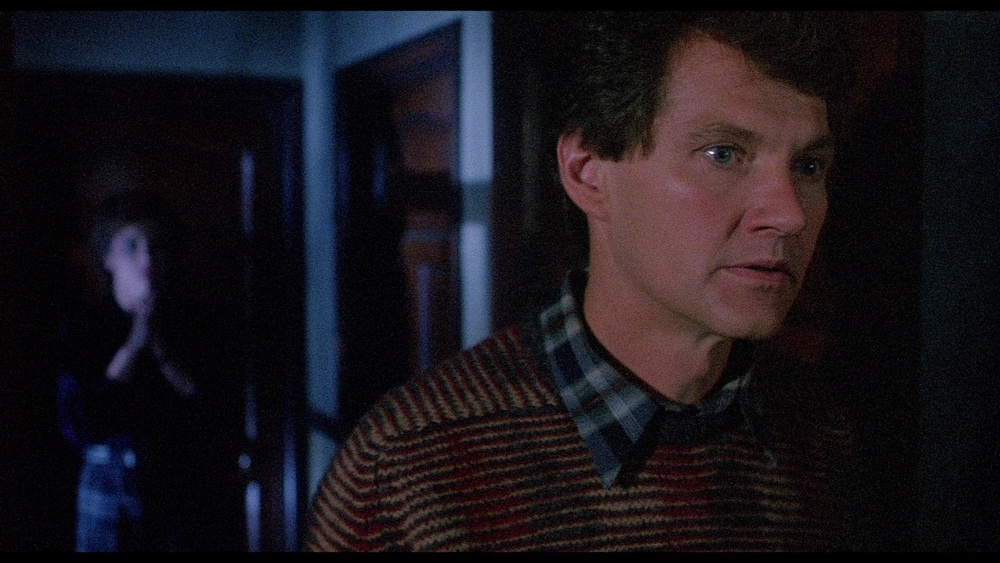 What’s notable about Hellraiser is how it’s more a twisted family drama than a gruesome supernatural chiller, or spectacle of make-up effects. Although it gradually encompasses all three.

Larry Cotton (Andrew Robinson) moves into his late brother Frank’s (Sean Chapman) empty house with his new wife Julia (Clare Higgins), bringing along teenage daughter Kirsty (Ashley Laurence) from a previous marriage. They’re a dysfunctional trio, as Kirsty doesn’t get along with her forbidding stepmother, who in turn never told her husband about a passionate affair she once had with his late sibling…

In one memorable sequence that underlines the tenet of Hellraiser (that pleasure and pain aren’t mutually exclusive), flashbacks to Julia having sex with sadomasochist Frank are intercut with her current husband Larry slicing his hand on a protruding nail. And after Larry’s blood spills on the floorboards of an empty room upstairs, this unwitting ‘blood offering’ enables the return of his damned brother as a skinless monster. Later, the reborn Frank convinces his sister-in-law Julia to murder various men she lures back with the promise of sex, in order to further regenerate his body. 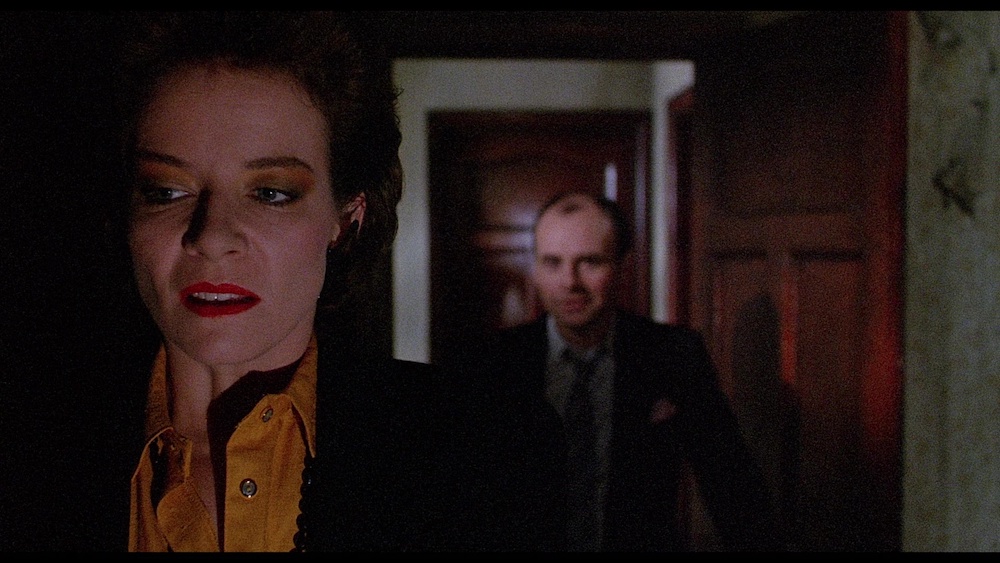 You can write a great deal about Hellraiser without once mentioning the franchise’s iconic puzzle box (the ‘Lament Configuration’), which has the power to open a doorway to a hellish dimension and summon ‘Cenobites’ — mutilated demons who offer people forbidden pleasures of the flesh. 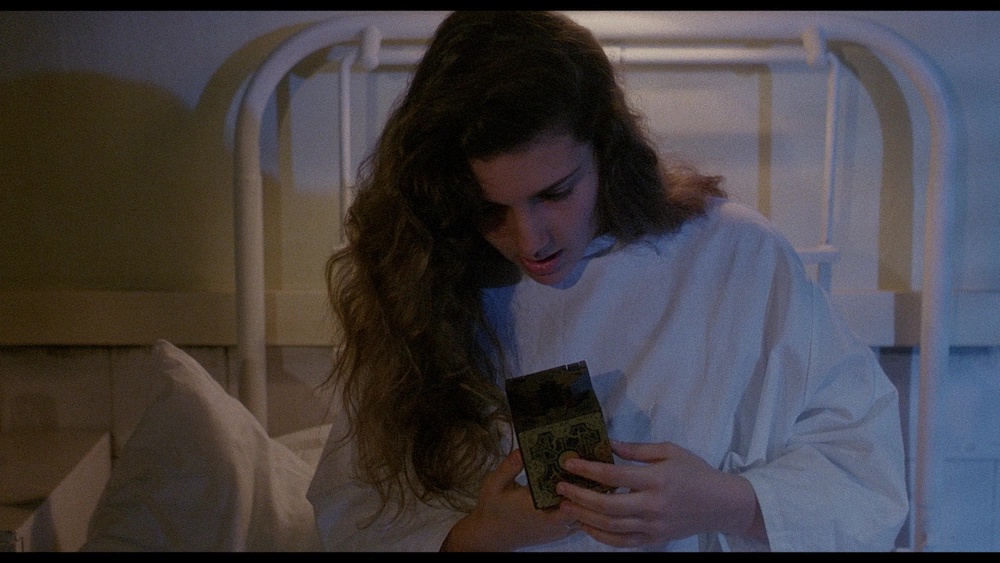 This is a horror movie that burrows deep under your skin, just as deeply as hooks do likewise to various characters who cross paths with the Cenobites. The characters have clear motivations and desires you can identify with on some unsettling level, even if you’d never make the same decisions.

And while not everyone can understand the appeal of S&M, most are curious about it. If you were a sexually confident nymphomaniac, who lived to satisfy their every desire and engaged in taboo activities things fresh … wouldn’t the possibility of opening a portal to a realm where pain and suffering becomes indistinguishable from the best orgasm pique your interest? Well, maybe not. But for the purposes of fiction you’re able to accept other people’s curiosity may impair their judgement, as they’re driven to taste forbidden fruit. Or you’d likely give a puzzle box a few minutes of your time, even if a friend told you it opens a gateway to Hell, right? 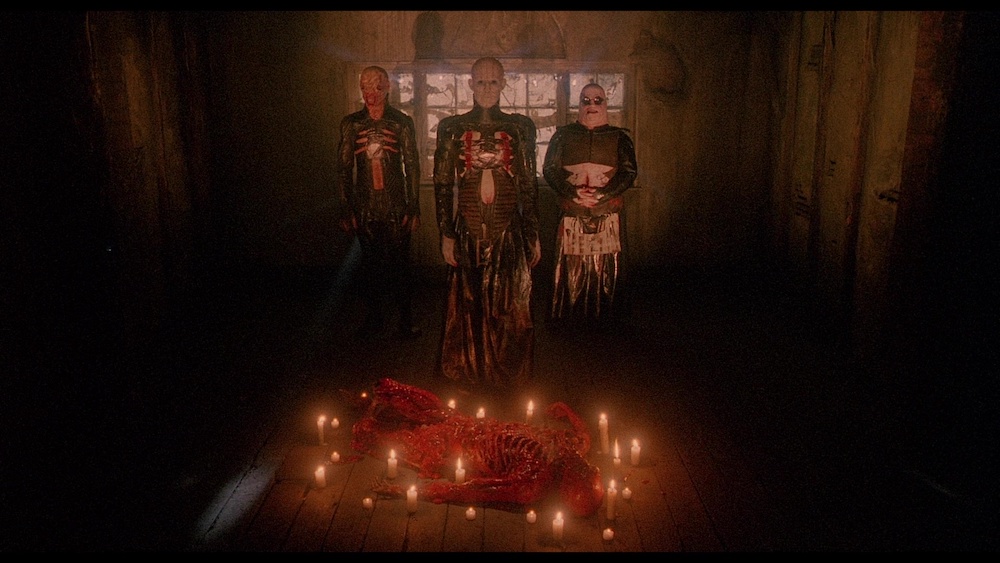 Clive Barker’s horror writing is renowned for its religious motifs, flayed bodies, sexual predilections, and extreme imagery. Hellraiser is a distillation of everything that made Barker a creative force in literary horror during the ’80s, and remains the mainstream’s easiest access point to his dark imagination.

That he managed to elicit such strong performances from these actors, together with so many accomplished chills on a tiny budget, is quite extraordinary for a first-timer. This makes it all the more disappointing to remember that, beyond Hellraiser, Barker’s subsequent flop Night Breed (1990), and the overlooked Lord of Illusion (1995), the English author’s idiosyncratic vision has largely been confined to the page.

Hellraiser is back on special edition Blu-ray Steelbook from 30 October. 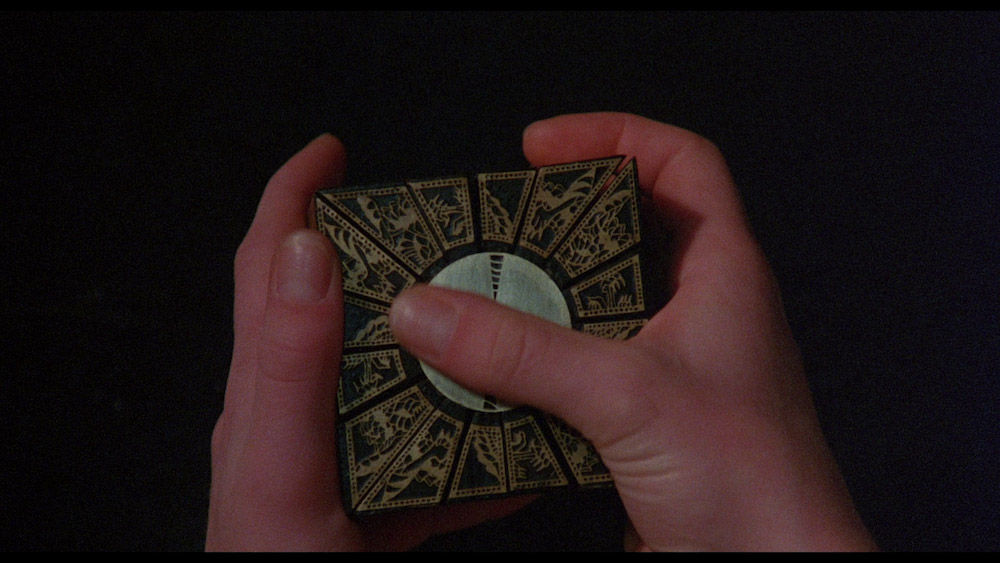 This sequel to Hellraiser was made so quickly it’s fair to expect a cash-grab based on audience reaction to Pinhead, much like what happened with A Nightmare on Elm Street 2: Freddy’s Revenge (1985). That’s part of what makes Hellbound: Hellraiser II such a welcome and unexpected surprise, because while the storyline is simpler and less nuanced, foregoing the emotional prickliness of Hellraiser, it’s also more ambitious and visually striking.

It does feel like a slight sop to horror genre conventions, however. Barker couldn’t return because of his commitments to Night Breed, so he wrote the story’s outline and entrusted  another first-timer called Tony Randel to bring his vision to life. That it succeeded is almost a case of catching lighting in the same bottle twice. Some even prefer Hellbound to the slower, moodier original. It’s certainly a more crowd-pleasing approach to the material.

Hellbound has a more conventional setup, with Kirsty firmly installed as the plucky teenage heroine, after surviving her murderous stepmother Julia and undead uncle Frank’s advances. Only a short time’s passed since the events of Hellraiser, and Kirsty’s mental state is being assessed by the renowned Dr. Channard (Kenneth Cranham), whom we soon learn has a private interest in the occult. And that fascination leads him to resurrect Kirsty’s mother with a human sacrifice on the blood-stained mattress she died on. I didn’t question how this worked to bring Frank back last time, but having the same trick work twice makes it seem like there’s a gaping hole in Hell’s security system! 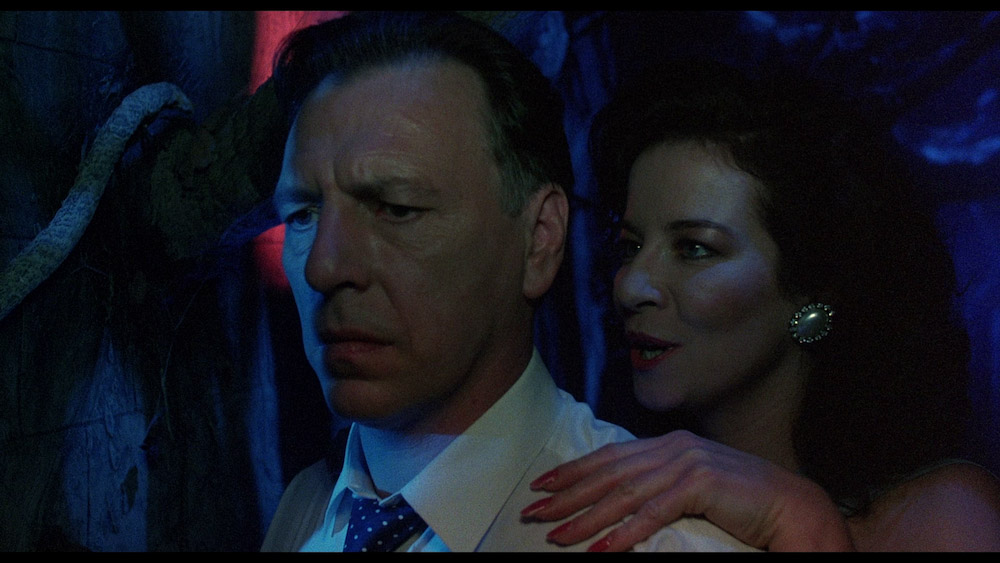 Hellbound is less focused and lacks the tight control of Clive Barker’s original, but it’s a direct sequel that does things differently, on a larger scale, while still working as apiece. The story doesn’t contain as many surprises in the first half (I couldn’t even tell what the reborn Julia even wanted for a long time), but once Hellbound lives up to its title and the characters enter Pinhead’s domain it becomes enormous fun.

The vision of Hell is also quite unique; a medieval labyrinth of white-stone walls, emanating a feeling of cold and echoing emptiness. I’m sure the $12m budget is partly the reason why there weren’t billions of damned souls screaming from the brickwork, but the feeling of isolation subverts our expectations very nicely. The reveal that Hell is ruled by an enormous diamond-shaped ‘Leviathan’ (shooting out ‘dark light’),  not a more convention ‘Devil’ figure, is also a welcome slice of Lovecraftian madness. 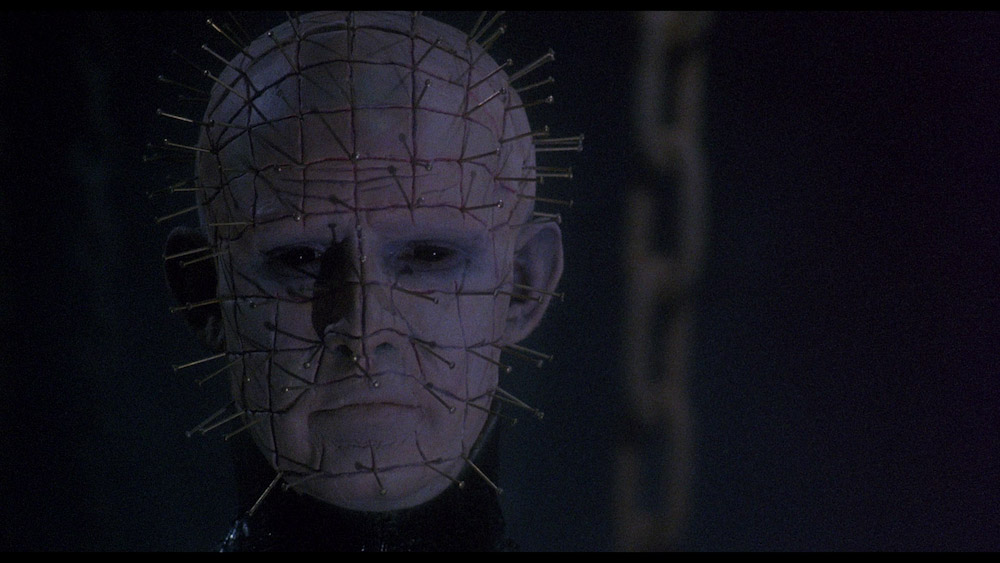 It’s also a relief that Pinhead and his Cenobites are used sparingly, again, so their occasional entrances remain standout moment of spine-tingling dread. I don’t think it was wise to open the movie with a flashback revealing that Pinhead was once an ordinary British soldier who solved a Lament Configuration box himself, although I understand why they wanted to foreshadow what happens with the similarly curious Dr. Channard, and how Kirsty later ‘defeats’ the Cenobites. It just demystified the franchise’s villain too much, too early.

Hellbound: Hellraiser II is very much the Nightmare on Elm Street 3: Dream Warriors of this saga: more enjoyable and visually richer than the original, if less challenging and frightening. But it’s nevertheless a commendable follow-up that, taken on its own merits to entertain a larger demographic, achieves a lot by developing the mythology and pushing the narrative down unexpected paths.

It’s not a cynical retread of what came before, and I like how Julia and Kirsty’s storylines continue straight into this weirder adventure to another dimension… where a thespian like Kenneth Cranham gets to wrap cheese wire around his head while dangling from a diabolic penis. “We have such sights to show you”, indeed. 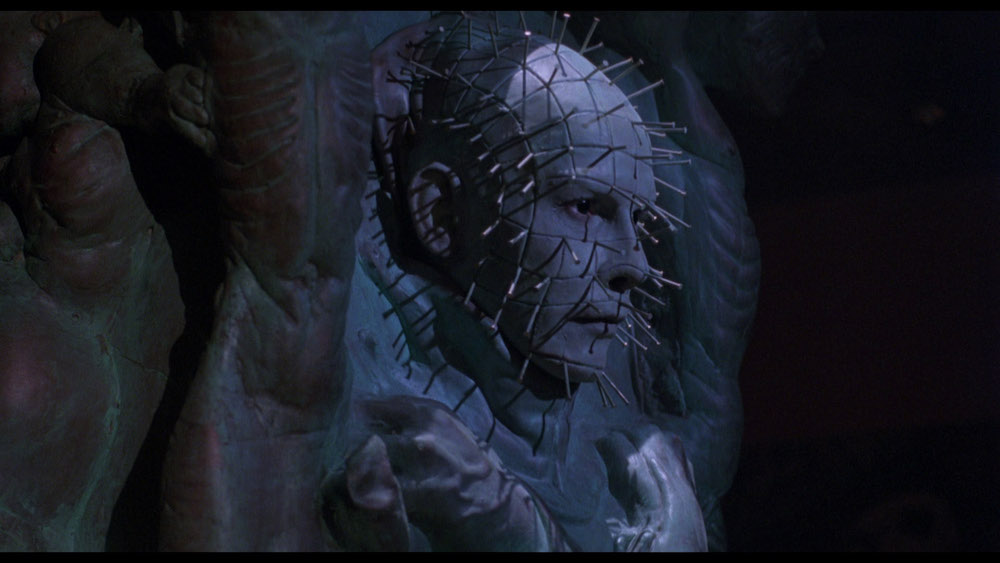 The story reached its natural end with Hellbound, so Hellraiser III: Hell on Earth was always going to be a tough sell. The earlier movies had both been made with Clive Barker’s involvement, utilising much of the same cast and British crew, but the third movie looks, feels, and behaves very differently. It’s Hellraiser, Hollywood-style.

Filmed over six weeks in North Carolina (standing in for New York City), Hellraiser III has the distinction of being the first movie released by Dimension Films. But it exists mostly for the marketing potential of getting Pinhead on a one-sheet poster with the Manhattan skyline over his shoulders.

The only thing I like about Hellraiser III is how it nicely addresses what happened to Pinhead following his defeat in Hellbound. He’s since been trapped inside the Pillar of Souls, together with one of those infernal puzzle boxes, which is later sold to playboy nightclub owner J.P Monroe (Kevin Barnhardt).

For almost an hour, Doug Bradley’s forced to play his signature role as just a face trapped inside stone, ordering J.P to bring girls back to his apartment so he can murder them to restore himself to full physicality. It’s fun to see the reversal of Pinhead being the Frank/Julia character this time, but unfortunately the script does a poor job developing things from there. 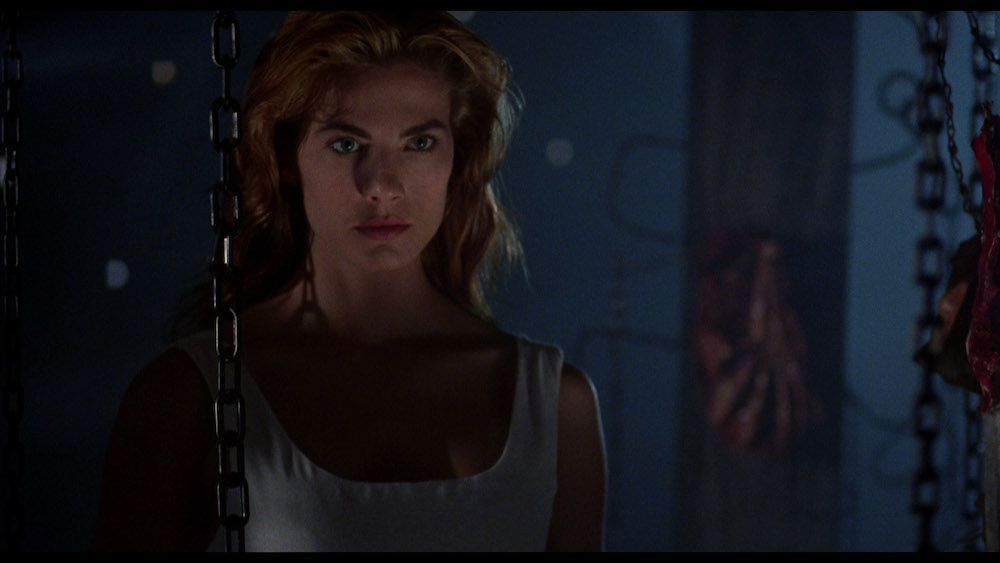 What’s most disappointing about Hellraiser III is how rote the storyline is, and how much of it feels like a collection of tired genre cliches where cops investigate occult murders in a big metropolis.

Our new heroine is photogenic and enterprising TV reporter Joey Summerskill (Terry Farrell, soon to be Hellraiser Andrew Robinson’s co-star on Star Trek: Deep Space Nine), whose career’s stuck in a rut. That’s before she starts investigating the bizarre death of a clubber she witnesses being torn apart by chains emanating from a strange box in an emergency room. So while the first two Hellraiser’s had an unusual but relatable family situation from which to drag supernatural forces into the mix, this sequel’s very quick to take stock characters and situations and then just throw Pinhead into the mix. And where he was once a very frightening character full of strange elegance and rationality, he loses his mystique to instead become a cackling goon. 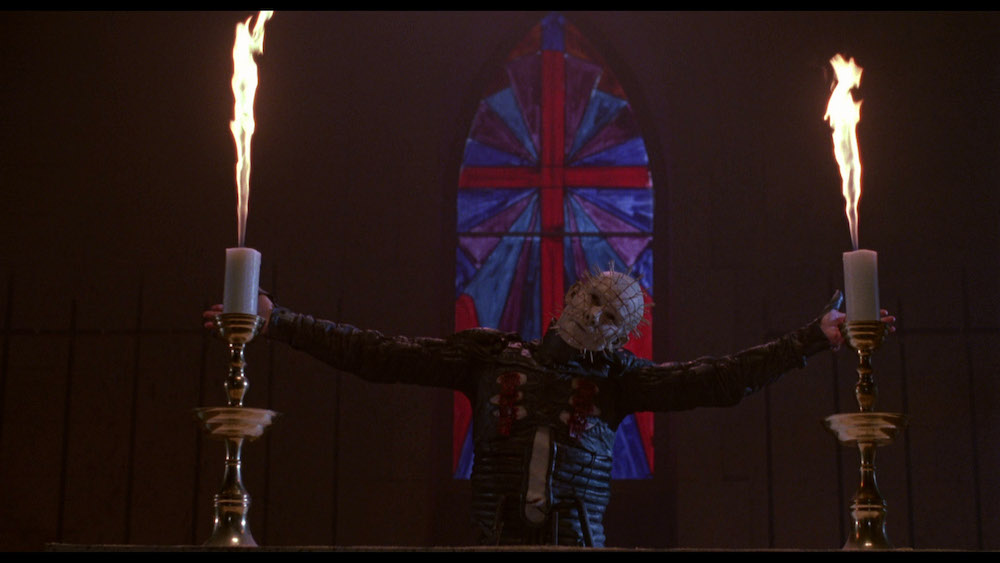 Defenders will justifiably argue this is because we’re seeing a different Pinhead in Hellraiser III (one without any human side deep down), but I wish the script had made this distinction clearer. When Joey visits Pinhead’s human incarnation, Capt. Elliot Spencer, in her dreams, it’s very confusing. Spencer’s been trapped in limbo, reliving his wartime experiences, after what happened to “him” (i.e. Pinhead) at the end of Hellbound, but the script does such a messy job explaining this it never clicked for me until I did some light research.

Hellraiser III is a movie that’s derided by many, and is certainly the weakest of these first three movies, but the franchise sank to such depths in the following seven direct-to-video abominations that it’s hard to muster too much anger about it. It’s a bad movie and a poor sequel, but there are at least a few decent ideas swirling around its empty head, together with adequate direction from Anthony Hickox (Waxwork II: Lost in Time). The fact things got a lot worse shouldn’t excuse it, however, so I won’t pretend it’s worthy of much critical reassessment.