Pixar’s second film of 2015 couldn’t be more different from its first. Whereas Inside Out was a complex, grown-up fantasy very much from the studio behind Wall-E and Up, The Good Dinosaur is a more straightforward kids film. The nod-wink jokes are in short supply, and the film’s more plainly a fable than anything the studio’s ever made. The result is something different rather than inferior to the Pixar greats that’ve come before, though, and there’s much to enjoy in this tale of prehistoric friendship as wobbly-kneed dino Arlo (voiced by Raymond Ochoa) goes on a journey of self-discovery, encountering danger and unexpected delights along the way.

We meet him as he hatches from an egg, the runt of a litter that includes gutsy sister Libby and brutish brother Buck. Arlo is afraid of everything, though, trembling through chores (feeding birdzilla-like chickens) and worrying his patient, benevolent father Henry (voiced by Jeffrey Wright), who only wants the best for his youngest son. Debut director Peter Sohn introduces us to this brood—which includes Frances McDormand’s mother Ida—via cheery, Little House on the Prairie-esque scenes following their lives as (somewhat bizarrely) dino farmers; tilling fields, harvesting crops, and fending off thieving savages. 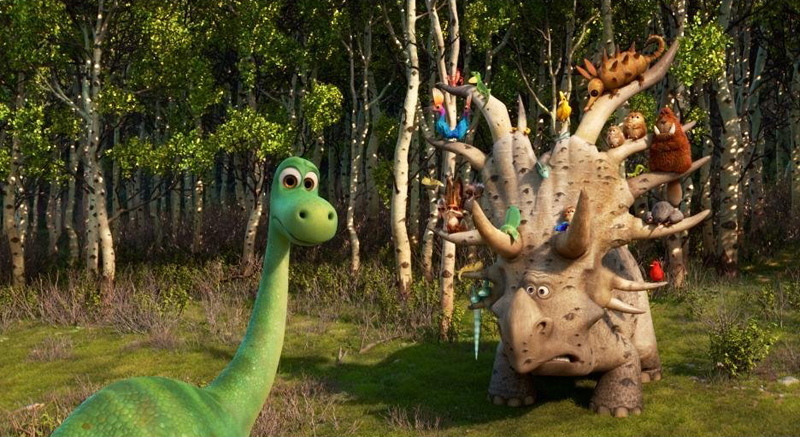 It’s an initially confusing world, set millions of years after an asteroid misses Earth, meaning dinosaurs and early humans now share the planet. The incongruity of this strange new world extends to the photo-realistic CGI environments (dazzling mountain ranges, rushing rivers), which are populated by oddly cartoonish creatures. Arlo has the magnified eyes and exaggerated build of a traditional Disney character, so it’s initially odd to see him galumphing through such a realistic setting; the film sometimes threatening to slip into the uncanny live-action-meets-animation terrain of Who Framed Roger Rabbit.

That dissonance speaks perhaps to the film’s behind-the-scenes tinkering, in which voice actors were replaced and release dates were changed (it was originally due in 2013). Though those changes all appear to have been for the better, it’s difficult to understand some of the artistic decisions. And despite so long spent tinkering, the episodic plot delivers few real surprises. Echoes of The Lion King, The Land Before Time and numerous other anthropomorphic coming-of-agers abound, and it’s likely even younger children will predict the outcome. 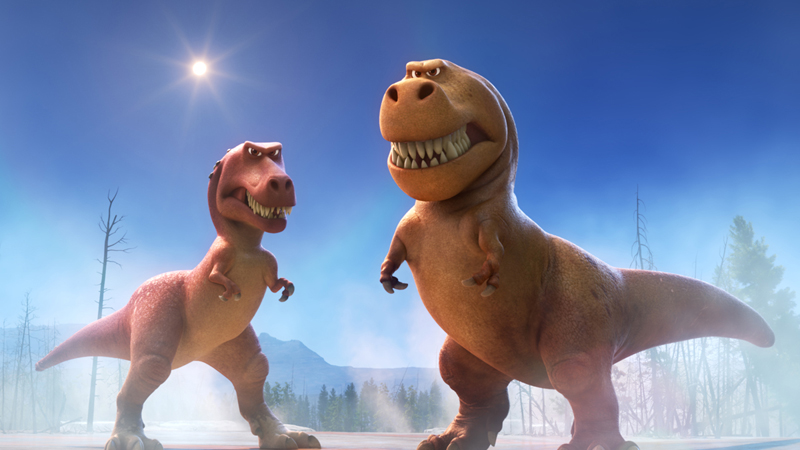 These faults, though, are made up for in The Good Dinosaur‘s central friendship. When Arlo first encounters scrappy cave-child Spot, they’re sworn enemies… but over the course of the film, they develop a relationship that occasionally packs the same devastating emotional wallop as some of Pixar’s classics. Speaking of the company’s past, it’s no coincidence that the best Pixar films are buddy flicks, and Sohn’s creation is no different.

The relationship between Arlo and Spot is its most interesting and nuanced, despite the fact that Spot can’t speak. The boy-and-his-dog framework works because, in this case, the ‘dog’ is human, and when the film focusses on its central pairing, the results are rapturous. When Arlo and Spot eat rotten fruit, their trippy hallucinations earn the film its biggest laugh, while a wordless moment in which Arlo tells Spot about his family by drawing in the sand is just the sort of tearduct-bothering brilliance the studio excels at. 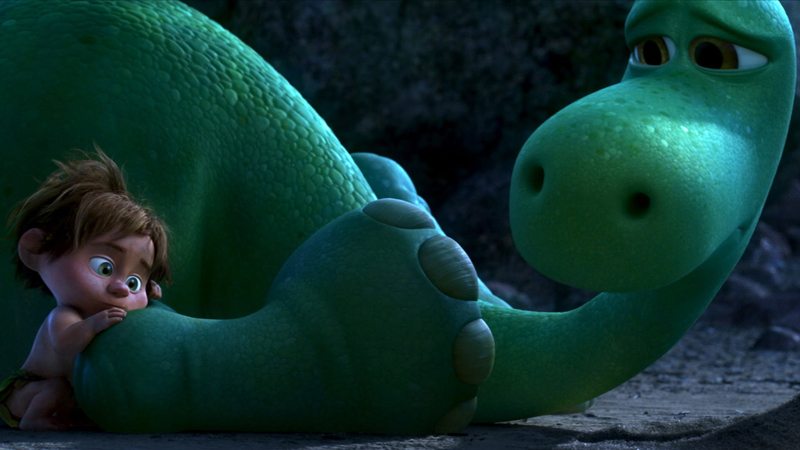 And in what is essentially a Jurassic road movie, The Good Dinosaur isn’t short of memorable encounters—as, in the wake of a disaster, Arlo attempts to make his way home. Most effective is a genuinely tense impasse with a trio of pterodactyls, while a paranoid triceratops puts in a memorable cameo—and a whack-a-mole joke involving burrowing critters cranks the hilarity up to eleven.

It’s not all successful, though. A campfire sojourn with three cattle-herding T. Rexes pushes plausibility to its limit, and much of the peril feels plodding; lacking the ticking clock urgency of, say, Finding Nemo. And for a film that’s so clearly aimed at a younger audience than Pixar usually courts, the inclusion of insect decapitation and fluffy creatures being grotesquely gobbled up is particularly strange. Sohn has said that nature itself is the villain in The Good Dinosaur, but the family-friendly tone of the film is derailed by some of its darker content.

It would be easy to read The Good Dinosaur’s uncomplicated plot as a step back for Pixar. That would be unfair, though. After the intricate inner-world of Inside Out, it offers an arresting counterweight—an uncynical adventure that dazzles even if it’ll never be praised for its narrarive innovation. In a year when dinosaurs roamed the Earth again in Jurassic World (the year’s most profitable film at $1.6 billion), Pixar’s latest should provide dino-loving kids with plenty of entertainment. For everybody else, well, there’s always Inside Out.