Makato Shinkai had a titanic undertaking first putting pen to paper in the daunting, preliminary phases of his animated feature Weathering with You (Tenki no ko—literally translated as Child of Weather). Shinkai’s internationally celebrated hit Your Name (2016) made global waves that are no doubt still rippling through Japan’s animation industry, with its exquisitely crafted world and borderline dangerous premise—a body-swapping, time-travelling, disaster movie all hinging on a ‘can-they-or-can’t-they’ romance. It was, in my opinion, a near-masterpiece, and made me well up with tears on more than one occasion.

But if you’re biding your time hoping for Your Name 2, perhaps hold off on buying a ticket, as Weathering with You isn’t that sort of film… 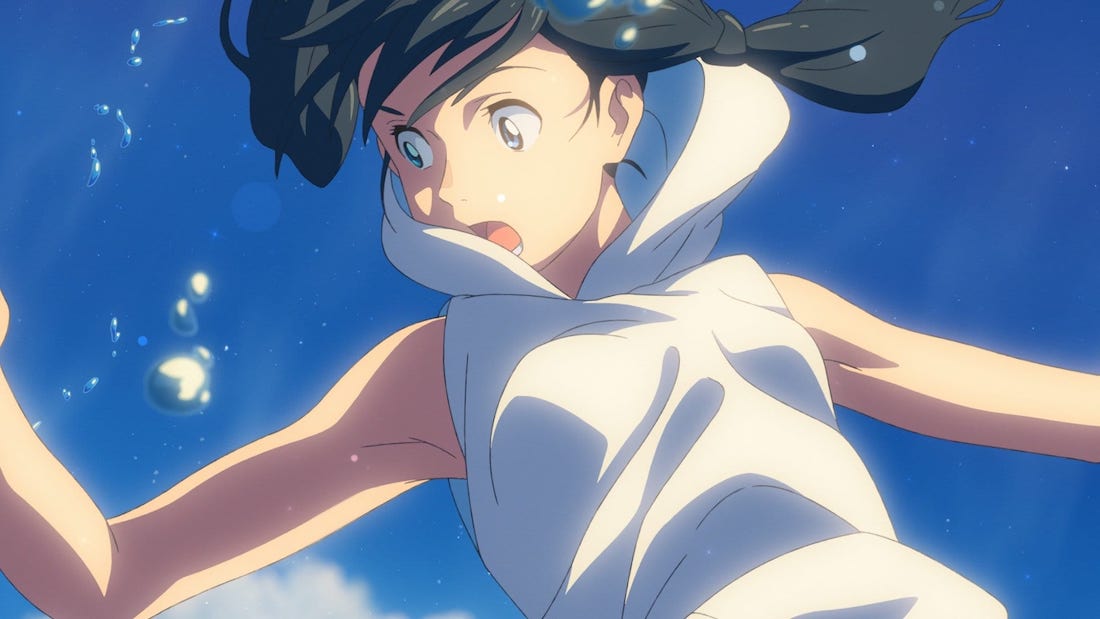 You’d be hard-pressed to find a reason not to enter the cinema with high expectations. After all, Shinkai’s destined to become synonymous with this generation’s most impactful animators. Shortly after the film’s opening scenes, one could sense an immediate reminiscence of his work in The Garden of Words (2013) through the masterful combination of wonder and melancholy, with the most directly derivative aspect being the use of rain as a plot element. I’m now certain, after watching both films, that Shinkai has chosen rain in these features simply to show off his raw, artistic mastery.

Unlike Your Name’s relatively simple though outlandish premise, Weathering with You takes on a mountainous idea, combining multiple interlacing concepts to create a dense spectacle crammed with material. Unfortunately for Shinkai and the viewer, the material that floats to the surface can be somewhat lacking in substance. 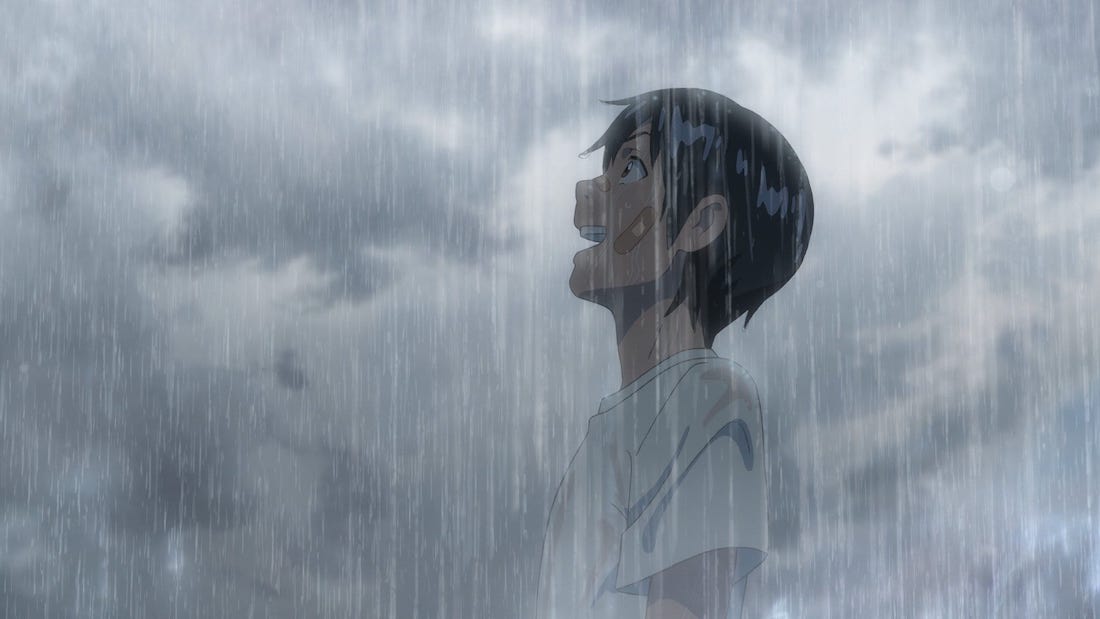 However, that’s not saying the film is devoid of meaning. Hina Amano (Nana Mori), one-half of our protagonists, is a young girl living in Tokyo with her playboy sibling, Nagi (Sakura Kiryu), who has the ability to clear the rain by praying to the sky. It’s a simple, fantastical concept, but also one steeped heavily in Japan’s rich heritage. Shinkai has provided a respectable homage to traditional Shinto rituals— a la Your Name’s shrine stewardess’s—and Weathering with You doubles down on these customary practices. The basis of the film centres around Hina delivering these silent prayers to a benevolent sun God, begging for clear skies. All this helps in not only crafting a beautifully-realised world but also adding a layer of regard for Japan itself; the movie is an exhibition for the county’s brilliant ritualistic mythos.

While Hina’s ability to dictate whenever the sun would appear seems, on paper, to be a fun and relatively mild superpower compared to Marvel’s outstanding backlog of Gods, super-soldiers, and talking raccoons. It’s the quintessential solution for the problem plaguing Weathering with You’s Tokyo: endless rain. 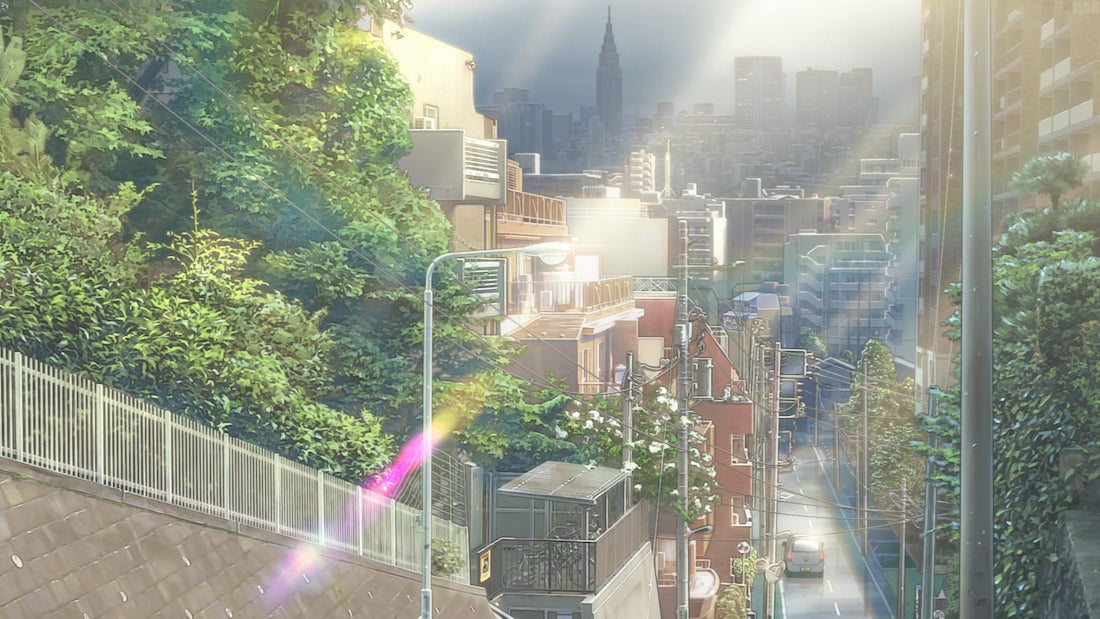 Kicking off the story, Hodaka Morishima (Kotaro Daigo), a 16-year-old runaway, takes flight on a cruise ship to Tokyo in a desperate attempt to escape his mundane rural existence. During the trip, a freak rainstorm appears and almost sweeps the boy overboard and into the unforgiving ocean, only to be saved by a man, Keisuke Suga (Shun Oguri).

Hodaka pays for his meal as thanks and Keisuke gives him his business card, offering him work in the city if needed - but Hodaka is reluctant to accept. The pair part ways upon reaching the drowning city of Tokyo and Hodaka begins his search for a part-time job. However, it quickly becomes apparent that Hodaka’s youthful ideologies are crumbling as, under the never-ending torrent of rain and reality, there appears to be no reprieve for the minor. Without income, his finances run dry, and before long he’s homeless and hungry. It’s at this point where he meets Hina working at a McDonald’s. It’s a brief encounter, but one of great significance as she offers him a burger to quench his evident hunger. She’s his saviour; a shining light of hope fitting for one that carries the spirit of the fox.

From there, the story erupts into a cacophony of loosely-related random events, beginning its gradual degradation of sense as Shinkai over-saturates the film with a varied array of interconnected concepts. 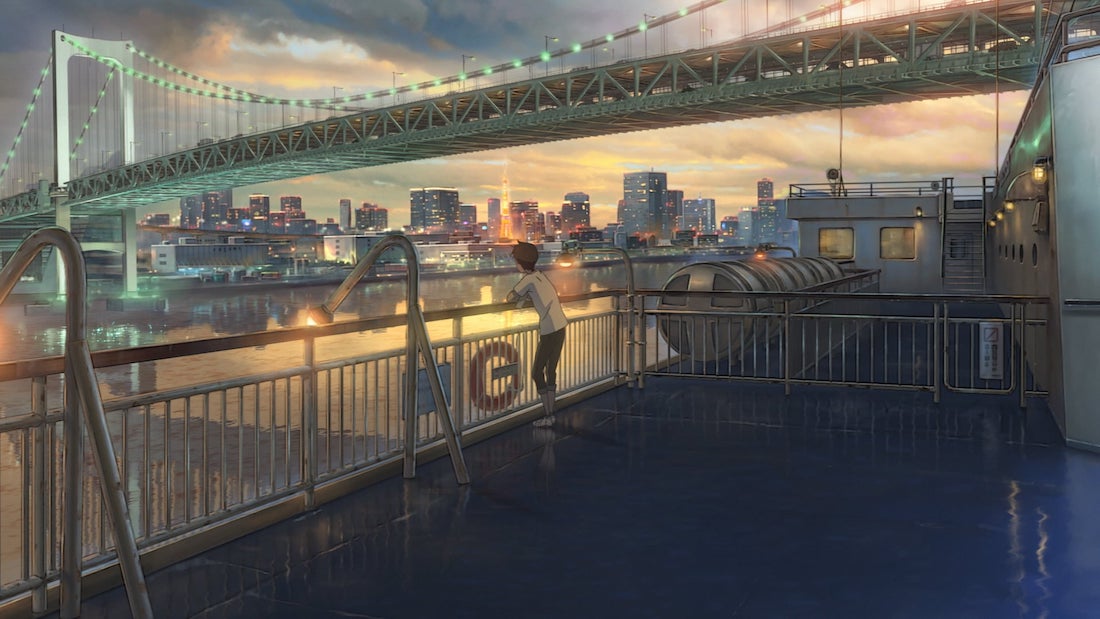 What made Your Name such a success was the simplicity of its idea combined with its extravagant, peerless execution—a compound sorely missing in Weathering with You. Many of the plot points outside of Hina and Hodaka’s budding relationship had me thinking “was that necessary?”—including a highly contrived police investigation that spurs the film’s unkempt final act. Instead of adding extra depth to the story, these side stories ended up taking away from the overarching narrative, dulling the emotional impact that the end scenes were striving for.

Weathering With You aims to be a tale of breaking conformity and disposing of societal standards but finds itself lost within its own goal. It teeters along the edge of its themes, not quite bold enough to take the leap, but close enough that audiences are left waiting for something to happen. Teasing the audience with a meaningful plot, Shinkai makes an effort to pose venturous, seemingly unafraid elements throughout the story, from questioning the true integrity and morality of Japanese societal norms to giving us a character who’s determined to flow opposite the tide of culture. Unfortunately, it all ends up fizzling out before it goes anywhere close to demanding deeper thought. 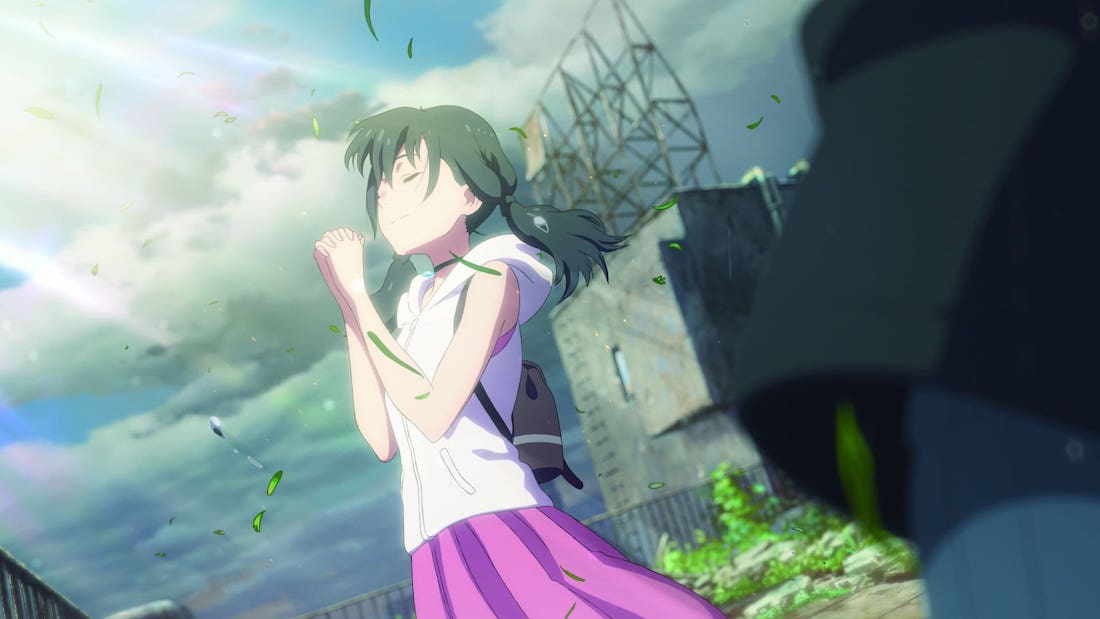 Still, I would, without a doubt, happily watch this movie again in its entirety and will most likely do so in the near future. Why? Because Shinkai nailed an incredible cast of interesting and endearing characters. I was laughing and smiling throughout much of the screening. The relationships Hodaka builds with Keisuke, Nagi, Natsumi (Tsubasa Honda), and Hina are enough to carry the 112-minute runtime and will have you beaming ear to ear as they provide release from the onslaught of melancholic imagery. Specifically, Hodaka and Hina’s younger brother, Nagi, offer up one of the most hilarious pairings I’ve seen in a movie.

It’s a shame, given Shinkai’s immense talent in crafting well-rounded, believable characters, that he allowed the voices of critics to penetrate through the success of Your Name. Ditching his archetypal introspective style, Shinkai moves towards more active characters following western media’s ‘show, don’t tell’ approach. What’s left unsaid, however, ends up being gaping holes, unfilled, in the core of these characters. Had he instead ditched the various subplots throughout the film, focused on creating a full-blooded, singular plot, strengthened the emotional developments between characters, Weathering With You would no doubt have been Shinkai’s magnum opus.

Besides the what-could’ve-been idealism, we’re still left with five incredible personalities that are a simple joy to watch doing even the most mundane of things. Shinkai uses his signature montage backed by an upbeat, smile-inducing J-pop song twice in Weathering With You—once near the beginning of the movie, once near the end—to completely different effects. The contrast in mood for both scenes creates this wonderful, cohesive juxtaposition, deepening the emotional impact of each montage. It’s things like this that show Shinkai’s incredible expertise in filmmaking. 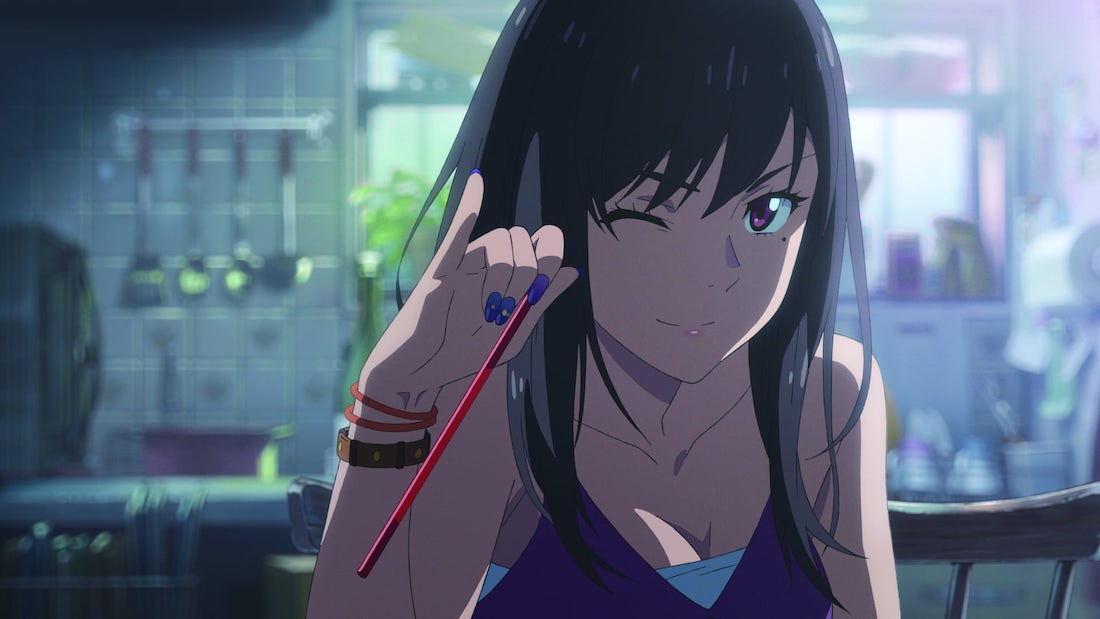 When you’re looking at a masterwork of art, such as the likes of Claude Monet and Vincent Van Gogh, the flow of conversation tends to steer away from whether the painting is good or not and towards the actual composition of the piece. Shinkai’s hyper-detailed rendition of Tokyo is very much the same. With hundreds of thousands of hand-drawn frames, the sheer amount of detail in each scene was a Herculean labour of love—there’s no point in me telling you it’s good. It’s so much more than something to look at. The background contains the same meticulous regard as the foreground, creating not only a visual feast for the audience but also telling a separate, allegorical story of life in Tokyo, Japan. The art isn’t just something that looks pretty—it’s the beating heart of the film as hundreds of unique framework characters go about their day to day, reminding us that this is a living, breathing world.

Despite the movie’s opaque and crowded plot, Weathering with You still has much to offer. With outstanding visuals and a stellar cast of characters, you can appreciate every single frame of Shinkai’s painstakingly detailed Tokyo city and its expertly crafted inhabitants.

It’s not another Your Name, but that that doesn’t mean it’s a failure. Shinkai is on the right track with his filmmaking, and Weathering with You shows that he’s looking to further himself beyond a one-shot international sensation and solidify himself in the direction hall of fame.

If he continues down this path of quality, Makato Shinkai’s trajectory will land him as a household name.

Screened as part of ‘Scotland Loves Anime’, on wide UK release from 22 January 2020. 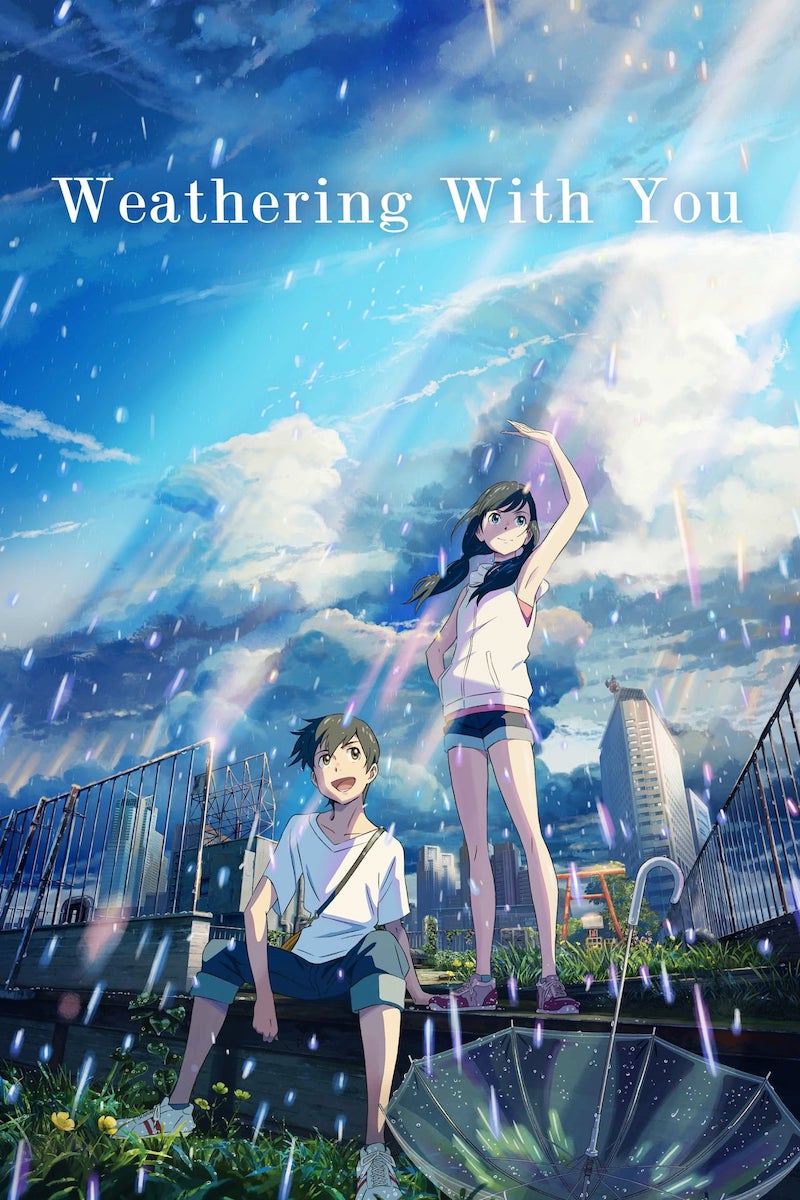