Adam Egypt Mortimer’s directorial debut, Some Kind Of Hate (2015), was the kind of feature that left audiences excited for what he’d make next. An underrated gem co-written with Paradise Hills (2019) screenwriter Brian DeLeeuw, Some Kind Of Hate was a refreshing take on the slasher genre with a supernatural twist. It contained interesting characters that subverted tropes but stayed within the confines of horror. Five years later, Adam Egypt Mortimer finally returns with his second feature, Daniel Isn’t Real…

After touring the festival circuits (including FrightFest and the Overlook Film Festival), Mortimer’s sophomore effort has been drawing critical attention. Based on co-writer DeLeeuw’s novel This Way I Saved My Brain and produced by the production company behind Mandy (2018), it draws on the director’s own experiences with imaginary friends, grief, and witnessing the self-destruction of loved ones. 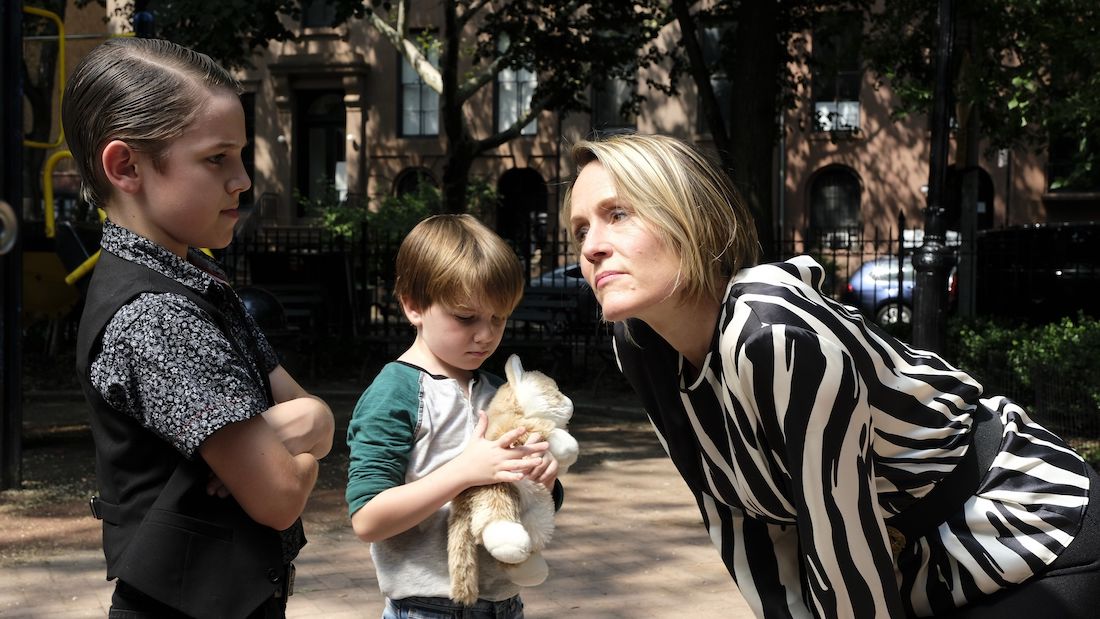 After a traumatic childhood experience, mischievous Luke Nightingale (Miles Robbins) finds solace with his imaginary friend ‘Daniel’ (Patrick Schwarzenegger), who tricks him into doing something terrible to his mentally ill mother (Mary Stewart Masterson). Suffering the repercussions for his actions, Luke’s forced to lock Daniel away in an old dollhouse—symbolically banishing him to the recesses of his subconscious. 12 years later, Luke’s finding life harder to handle between college and his mother’s ongoing mental fragility, and while in his childhood home he unlocks the dollhouse to unleash a charming and manipulative older version of Daniel… who now has a terrifyingly secret agenda.

Daniel Isn’t Real contains many great performances. Frequently typecast as the comic relief stoner in Blockers (2018) and Halloween (2018), Miles Robbins is able to show a whole new side of himself as Luke. Timid and unsure, he showcases a sense of emotional vulnerability that’s incredibly relatable. As his Jekyll & Hyde transformation gets underway, he’s endowed with a newfound confidence that’s enviable. However, Luke’s downfall begins when dealing with the realities of his mother’s mental illness. Mary Stewart Masterson (The Stepford Wives) is excellent as Luke’s unstable mother Claire. Her manic portrayal of schizophrenia is counteracted by a genuine love she shows her son. The odd juxtaposition of a loving relationship one moment and an expansive distance the next is all too familiar with parents and their children. Their dynamic is absolutely believable and makes up the heart of the feature.

Known more for his modelling work and famous father, Patrick Schwarzenegger (Scouts Guide to the Zombie Apocalypse) steals every scene he’s in as Luke’s imaginary friend. Using his style to his advantage, he begins as charming and sexy, but the cracks in Daniel’s facade begin to show and Schwarzenegger steals countless scenes from his co-stars. He delivers a maniacal performance that channels Patrick Bateman from American Psycho (2000), making Daniel both unnerving and chilling.

This is only Adam Egypt Mortimer’s second movie and he’s already establishing himself as a great horror director. He crafts scenes that exude the soul of Guillermo Del Toro (Pan’s Labyrinth) with the gore of Wes Craven (The Last House on the Left). His use of a dollhouse’s flashing windows with an eerie colour certainly revive antique horror tropes, along with using reflections in mirrors and glass to add a sense of duality to characters. Most unsettling is the claustrophobic shots he chooses, using door and window frames to heighten the sensation of being trapped. Surprisingly, the director also paces the story incredibly well. Often psychological heavy features can move slowly. However, with a brisk 95-minute runtime, no scene overstays its welcome.

The truly horrifying aspect of Daniel Isn’t Real is the harsh realities of mental illness—specifically multiple personality disorder and schizophrenia. It contains essences of other psychological horrors pictures such as Jacob’s Ladder (1990) and Donnie Darko (2001), as we follow Luke into madness. Mortimer’s message wrestles with the stigma of identity and mental health elegantly, examining challenging questions about how we cope with dark impulses and create false faces to conceal unappealing personality traits. The director speaks in a simple and compassionate way about human suffering, and the lengths we will go to numb the pain. Even if it means surrendering our logic and our rationality.

There’s no real explanation of why Luke or anyone may fall down into ‘the abyss’. Has Luke gained a mental illness genetically from his mother? Is he using Daniel as a coping mechanism over a childhood trauma? Or is Daniel just Luke’s devilish alter-ego? Whether Daniel’s a literal demonic entity or a figment of Luke’s subconsciousness is left open to interpretation. The film is really about the darkness that resides in all of us and the way we excuse our worst actions. Daniel seems energised by disrupting the status quo and believes he should be free from the shackles of morality. However it’s interpreted, the director tells a tale about life and the damage it can do.

The transition from psychological thriller to gruesome horror is deeply sinister. Considering the low budget, it transitions surprisingly well. There is plenty of mind-bending VFX that skew into David Cronenberg (The Fly) territory, and Martin Astles’ (The Chronicles of Riddick) practical SFX work is especially striking. In one sequence, Luke and Daniel seemingly begin to meld into each other’s faces like a squid wrapping its tentacles around its prey. Containing traces of Nightmare On Elm Street 4: The Dream Master (1988), the image of Luke and Daniel’s skin morphing into one another is grotesque. Further, the body horror visuals are amplified by the character’s reactions and some ghastly sound effects—like a scene involving a dislocated jaw.

Although Daniel Isn’t Real is based on DeLeeuw’s novel, Mortimer has said the final act strays away from its source material. The director adds a twist in an attempt to expand Daniel’s character. Unfortunately, the twist goes into a bizarre fantasy that turns the feature into something it isn’t. The final act sees Luke enter a fortress to confront a demonic entity resembling the man-eating Hieronymus Bosch beast. The director intended the scene to represent the character walking into his own mental breakdown, and in one Dreamcatcher (2003)-influenced moment we get to open a door into Luke’s mind. It’s a stylistic choice I personally didn’t enjoy, however, as it pushes Daniel Isn’t Real into supernatural terrain of Clive Barker’s Hellraiser (1987) or Ari Aster’s Hereditary (2018). It posits that Daniel isn’t an inner demon but a literal one. 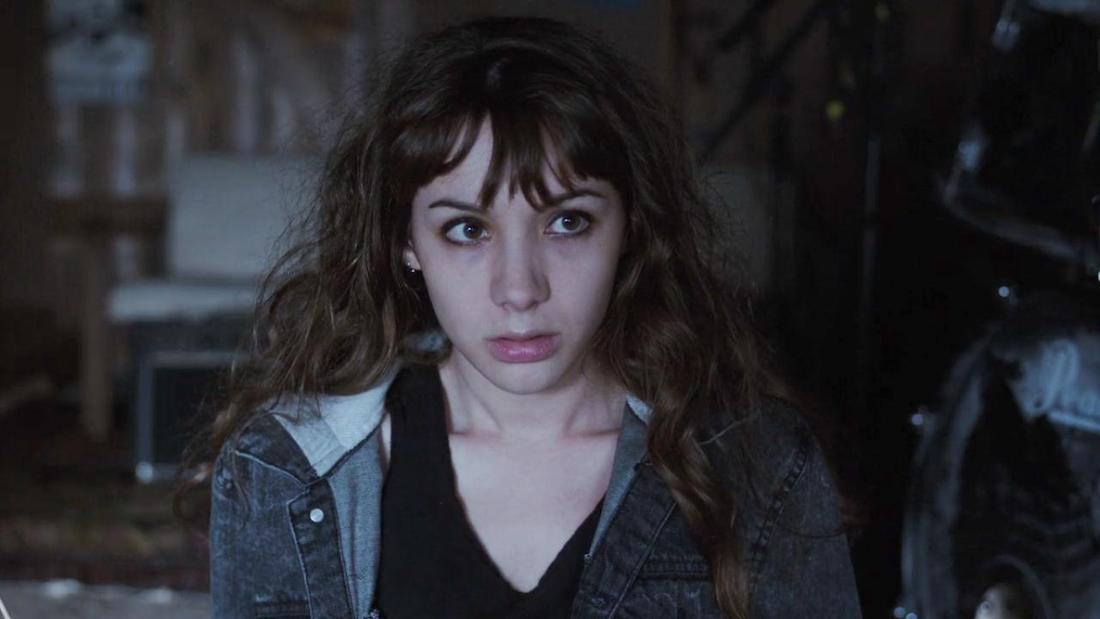 Daniel Isn’t Real is produced by Elijah Wood and Daniel Noah’s production company SpectreVision, an A24-like horror factory that has acquired thoughtful and entertaining properties like Cooties (2014) and Mandy, helping propel the indie horror scene to the mainstream. Daniel Isn’t Real uses a similar aesthetic to the company’s other movies. Mortimer used his experience with mental illnesses and, with the help of co-writer DeLeeuw, drafted a 35-page style guide to convey the terrifying mindscape of inner demons for their production team’s use—devoting several pages exclusively to the film’s use of colour, as well as simulating the experience of having a manic episode.

The colour-saturated cinematography by Lyle Vincent (A Girl Walks Home Alone At Night) drenches each scene in neon pinks, reds, and yellows. In one wonderfully composed scene, sumptuous red lighting in an underground tunnel suggests the characters are walking into “the abyss”. Vincent embraces the full-colour spectrum of the rainbow, as several scenes feel at home with a Dario Argento’s Suspiria (1977), while the dramatic compositions and hyperactive montages are in the vein of Darren Aronofsky’s Requiem for a Dream (2000). Speaking as a sufferer of anxiety who has frequent panic attacks, the swirling sights and dream-like hazes capture the struggle of such experiences. 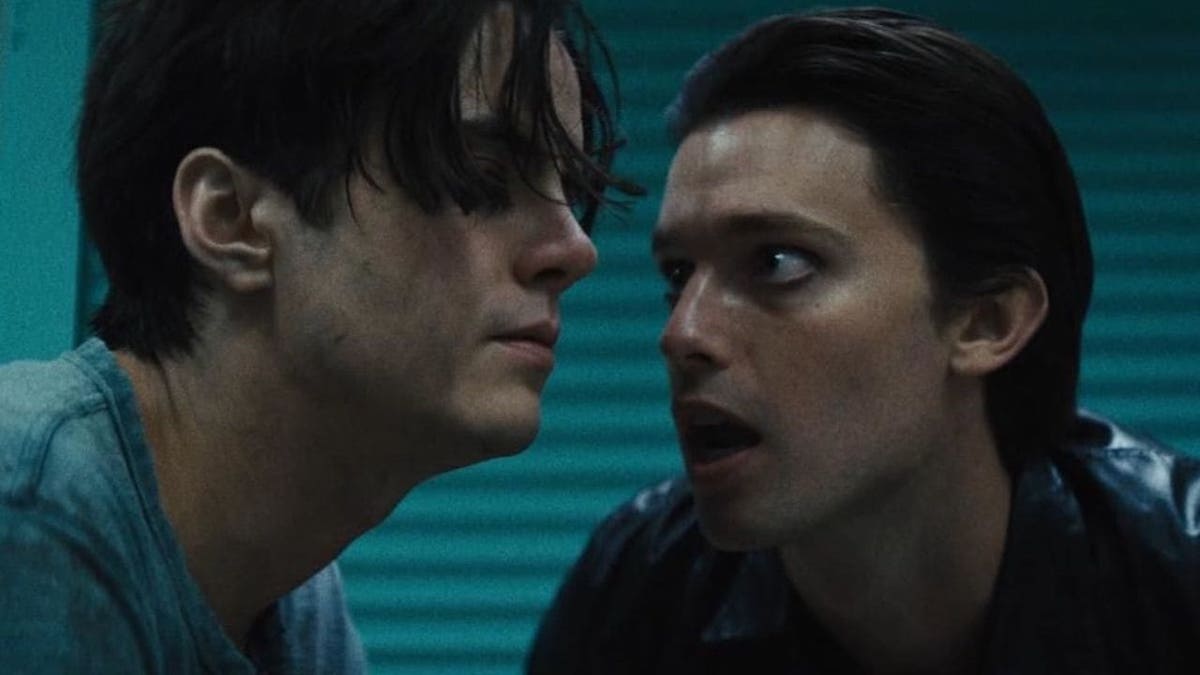 Although it’s not effective until the third act, the production design by Kate McAnney (Blue Heights) is stunning. She does a wonderful job differentiating reality and imagination. However, it’s the subtleties that work the best. Such as the use of cluttered items within Luke’s childhood home to reveal the character’s internal thoughts. Clark’s (National Treasure) sound design is where Daniel Isn’t Real excels, though. Just by listening to the score one can imagine the journey of the main character, as it draws you in with a mixture of synths only to hit your ears with stabbing violins reminiscent of Psycho (1960). Costume designer Begonia Berges (Daredevil) also works wonders with Schwarzenegger’s smart attire, as the monster at the heart of this story is impeccably dressed throughout.

In summary, Daniel Isn’t Real is an entertaining psychological horror. It boldly examines challenging subjects like mental illnesses alongside the struggle for self-confidence. How it handles mental health is thought-provoking and it never demonises suffers of these real-life issues. It has strong ties to David Fincher’s Fight Club (1999) given a Cronenbergian body horror twist… eventually playing out like a bloodier version of the comedy Drop Dead Fred (1991). Visually stylistic with a hallucinogenic music score, buoyed by some great performances. The more supernatural ending didn’t quite work, for me, but I’d recommend this for fans of Hereditary. 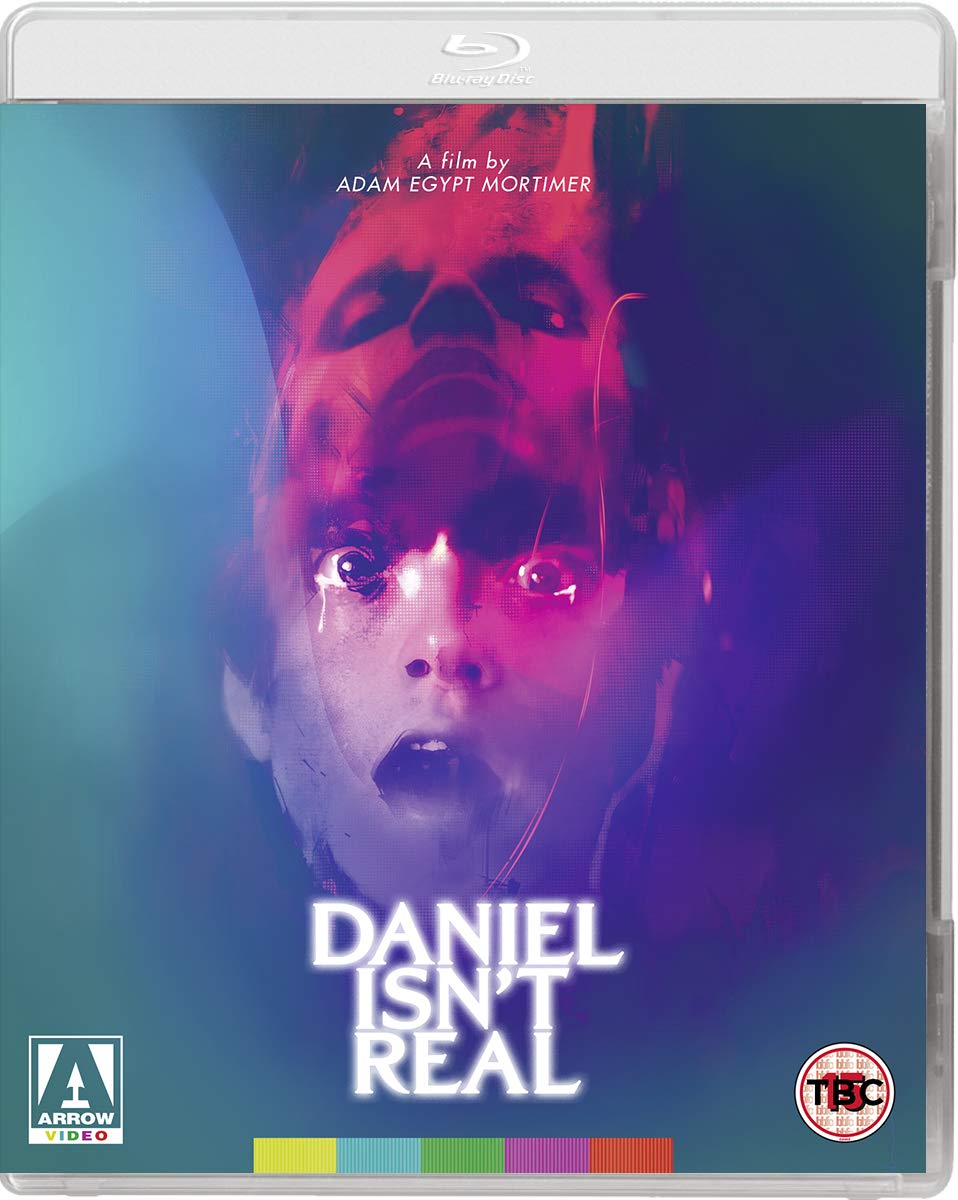 Filmed with a visual style and flair, Daniel Isn’t Real benefits nicely with a Blu-ray’s 1080p presentation. The aspect ratio of 2:39:1 fully captures Lyle Vincent’s sharp cinematography. Mostly set at night, there are countless instances of diffusion filters and colourful lens flares. The neon lights of the subway underground and bright lights of New York City are filled with vibrancy and energy. Adding a psychedelic experience, red instils a sense of fear whereas the over-saturated lighter tones create a dream-like quality. The blacks are deep and represent the abyss as the director intended. Whatever lies within them are consumed by a darkness that causes great tension. The low-lit scenes help create the specific mood of Luke. When the sun is shining during exterior scenes, it helps capture each fine line and building beautifully. Such as sequences in Cassie’s (Sasha Lane) apartment. Daylight streaming through her studio apartment, the colours and detail of her work is clearly visible. Daniel Isn’t Real is a visual treat for the eyes.

Daniel Isn’t Real sports a 5.1 DTS-HD Master Audio Track and 2.0 PCM stereo soundtracks, that are a perfecting fitting for Blu-ray. The lossless audio mix allows Clark’s soundtrack to shine. From the opening credits, the music is loud and punchy to fill the soundstage. The engrossing dynamic mix highlights its synthesiser-heavy soundtrack. Sound effects are well placed in the larger environments, and featuring effects immersing one in the setting. New York City rings with passing cars and hustle of the busy city. Whereas the supernatural world is filled with the sound of whirling vortex and echoes, seamlessly travelling between channels. The soundstage delivers a dramatic impression Mortimer intended, creating an engaging presence in Luke’s situation. At the centre of the soundstage, the dialogue cleanly rendered. Even during a nightclub sequence, it’s clearly audible.