Harley Quinn (Margot Robbie) was the standout of the poorly-received Suicide Squad (2016), thanks to a smart update of the DC Comics character, played with just the right combination of deranged rebelliousness and playful snark. It was a no-brainer for Warner Bros. to parlay audience goodwill into a spin-off movie for The Joker’s girlfriend, with Robbie herself producing the resulting Birds of Prey (And the Fantabulous Emancipation of One Harley Quinn). No doubt partly greenlit because of the positive response to DC Studio’s other female-led blockbuster, Wonder Woman (2017), Birds of Prey triples the “girl power” with a female writer and director (Christina Hodson, Cathy Yan) plus a supporting cast of other comic-book heroines fighting a misogynist crimelord.

While the title suggests Harley Quinn will be an addendum to the ‘Birds of Prey’ super-team, she’s thankfully centre stage as the unreliable narrator of her own crazy escapade. The action is told out of sequence with occasional rewinds and flashbacks to clue audiences into any missing backstory. This helps disguise what’s actually a fairly generic comic-book plot when presented chronologically, true, but it’s nevertheless an invigorating way to shake things up. And it means Birds of Prey feels like it’s oozing directly from Harley’s twisted imagination, perhaps exaggerated for our entertainment—who knows! I’d compare it to watching Fleabag if Phoebe Waller-Bridge wore gold trousers and bashed goons over the head with a carnival mallet. 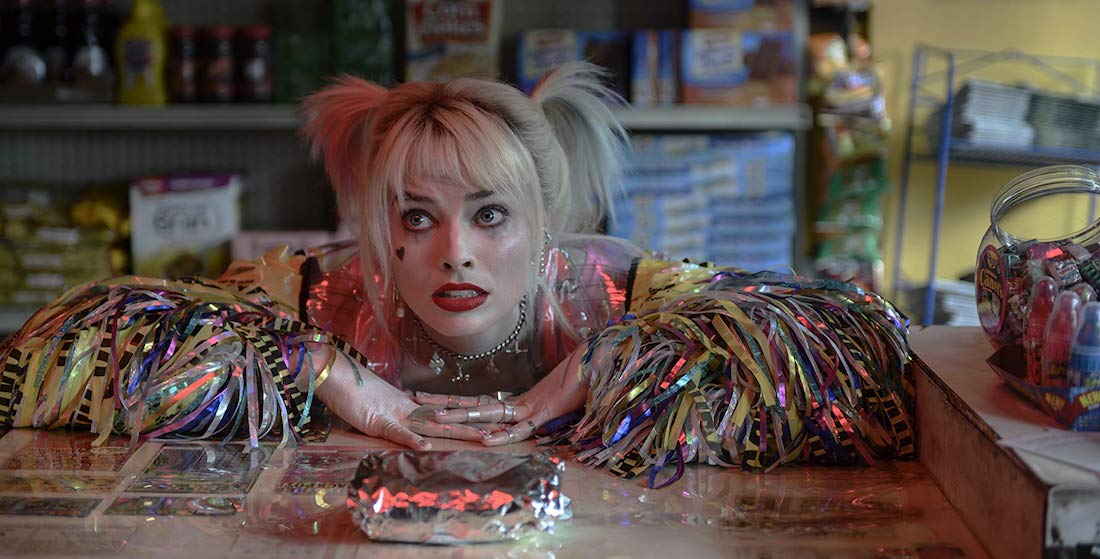 Birds of Prey makes the wise decision to tell a feminist story without turning into a man-hating sermon. It’s woven into the film’s DNA a lot better. Harley starts the movie fresh from a breakup with her “pudding”, The Joker (Jared Leto wisely unseen), and trying to get over her heartache without her underworld rivals and haters realising she’s no longer under any protection. But after deciding to cut her pigtails and blow up Ace Chemicals, where her relationship with the Clown Prince of Crime was forged, Harley decides to become her own woman and carve out her own niche in Gotham City. “A harlequin’s role is to serve. It’s nothin without a master,” she opines at a bar… but over the course of this movie, Harley proves herself wrong.

Four other women are embroiled in the story, most caught in the orbit of mob boss Roman ‘Black Mask’ Sionis (Ewan McGregor), owner of a club the burlesque singer Dinah ‘Black Canary’ Lance (Jurnee Smollett-Bell) works at before getting promoted as his driver. There’s also a cop called Renee Montoya (Rosie Perez), whose success hasn’t been rewarded as much as her male counterparts, currently investigating a spate of mob killings. And the ‘Crossbow Killer’ Montoya’s searching turns out to be a woman, Helena ‘Huntress’ Bertinelli (Mary Elizabeth Winstead), steadily making her way through a kill list she drew up as the sole survivor of a mob hit when she was a little girl. And finally, a precocious pickpocket called Cassandra Cain (Ella Jay Basco) comes to Black Mask’s attention after swallowing a diamond she stole that has the account numbers of a crime family’s fortune embedded inside.

But this is Harley’s movie through and through, particularly in the first half before the other ‘Birds’ have their individual backstories fleshed-out. Margot Robbie carries the whole shebang on her shoulders, proving to be even more irresistible than she was in Suicide Squad - only now the movie surrounding her matches Harley’s kooky personality and isn’t such a tiresome and gloomy grind. Robbie has an almost impossible level of beauty covered in tattoos and retina-burning outfits—as if Harley’s been torn from the pages of a comic-book—but the Australian actress also has the acting chops to make this unusual character fly. Her Brooklyn accent is note-perfect, her entire costume changes multiple times, and her pearly smiles and quirky expressions are magnetic.

It’s so much fun watching Harley go about her day —whether knocking out goons with bags of cocaine slugged their way with a baseball bat, or rollerskating around a moving car while being shot at from inside. Birds of Prey lived or died based on how audiences responded to Harley Quinn over an extended runtime, and Robbie ensures she’s more than just a tasty garnish like in Suicide Squad. Harley may be supported by four other women in the story, but nobody’s going to leave the cinema under any illusion this isn’t Harleen Quinzel’s movie.

In all honesty, the focus on Harley means the other Birds of Prey don’t leave a comparable impression. Black Canary enjoys the most developed storyline as a young woman under the villain’s thumb, sickened by his behaviour but feeling powerless to do anything about it, but she only uses her signature “scream” super-power the once. Montoya is a generic tough female cop archetype, with the movie even commenting on how her dialogue seems pulled from TV procedurals—but it’s at least interesting they cast a woman in her fifties who hasn’t been in any big movies for a long time. Cassandra isn’t handled too shabbily, either, mainly because she bounces between both Black Canary and Harley throughout the story—and it’s fun once she becomes a surrogate daughter to Harley and helps bring out her maternal side (eating cereal and watching cartoons on a couch). The biggest casualty of the ensemble approach is Huntress, as the talented Mary Elizabeth Winstead is slightly wasted in a reduced and uninteresting role. She’s just a broad-strokes vigilante who wears black leather, drives a motorcycle, and comes across as overly stoic. Although the running gag that Huntress practices announcing her bad-ass name in the mirror, but everyone still refers to her as “The Crossbow Killer” is one of the better ones.

Budgeted at $84M, Birds of Prey certainly wasn’t a cheap endeavour, but it doesn’t rival the money splashed on other outings in the DC Extended Universe (DCEU), like the $150M Wonder Woman—although these characters don’t require as much VFX because so few of them are true superheroes. Everyone’s just preternaturally athletic and don’t abide by the laws of physics. However, Birds of Prey’s smaller-scale proves a boon because it has to rely on the pacing of its story and the range of performances to pull audiences along. There are a fair number of set-pieces and well-choreographed fights, but everything’s kept grounded and feels as exciting to behold as a John Wick movie. And with so many other comic-book movies favouring world-ending events or supervillains with bold masterplans, it’s refreshing to see something with lower stakes that explores underutilised corners of a more vibrant Gotham City. Birds of Prey takes us in the city’s supermarkets, restaurants, and nightclubs, which aren’t exactly Batman’s stomping ground.

Ewan McGregory’s loathsome villain gets ample screentime (second only to Harley), which works well. As the antagonist, Black Mask is every toxic male impulse and chauvinist attitude rolled into one. It makes thematic sense he’s the threat to Harley and her friends, as the movie’s about repressed women finding their inner strength to carve their own identities and destroy a corrupt male who’s been making their gender’s lives a misery. Black Mask literally slices his enemy’s faces off (one clear example of why this isn’t PG-rated), but more memorably he punishes women out of misplaced paranoia and boredom. A scene where Black Mask makes a woman dance on a table for him at his nightclub, slicing her clothes off with a knife to publicly humiliate her and enjoy the power trip to boost his ego, is representative of how Birds of Prey approaches its deplorable villain. And no matter your gender, you’ll be cheering on Harley and her pals once they fight back in an abandoned amusement park to end this symbol of Gotham’s toxic masculinity.

Birds of Prey (And the Fantabulous Emancipation of One Harley Quinn) is a riot of explosive colours, fun antics, smart comedy, eye-popping fashion, wince-inducing violence, toe-tapping pop music, and thematic smarts that lean into a societal sickness that’s part of modern discourse thanks to #MeToo. It’s perhaps not as deep as I’d have liked it to be, with a thin story disguised by organised chaos, and some of the leading characters are blown off the screen by Margot Robbie’s sassy performance, but few will complain given all the other positives. Birds of Prey ranks as another win for DC Studios as they seek to provide a successful alternative to Marvel’s output. And they’re still in the unexpected situation of only being able to deliver unambiguous commercial and critical hits with female or lesser-known characters. I can’t wait for James Gunn’s The Suicide Squad. 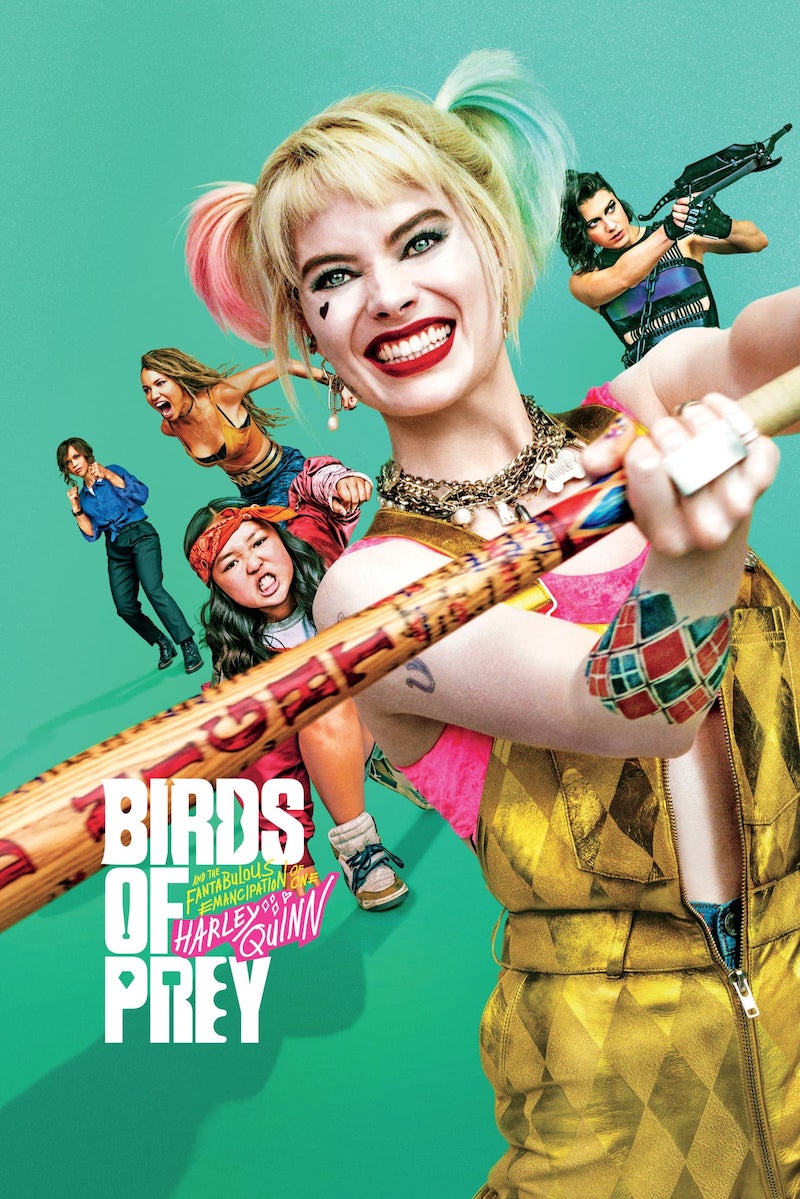