Nicolas Cage gets another excuse to dip into his crazy bag of tricks to play Red Miller, a lumberjack working in the Shadow Mountains in the year “1983 A.D”. His peaceful, reclusive life with artistic girlfriend Mandy Bloom (Andrea Riseborough) is shattered one night when she’s abducted by a cult called ‘The Children of the New Dawn’, then drugged and presented to their charismatic leader Jeremiah (Linus Roache). After spurning his advances, Jeremiah has Mandy brutally murdered in front of Red, before his ghoulish followers disappear into the night. However, Red isn’t the kind of guy to just thank God the nightmare’s over and grieve his loss; not when he can smelt his own giant battleaxe and seek vengeance.

Panos Cosmatos (son of George P. Cosmatos, who made Rambo: First Blood Part II) directs Mandy with a hallucinatory sensibility. Red’s a recovering alcoholic who witnesses a terrible atrocity, and the cult he’s chasing take mind-altering narcotics, so the movie reflects those twisted perceptions. There’s a chance most of this movie never actually happened, or certainly not in the way it’s portrayed, as you can’t wholly trust what’s being shown is the objective truth of events. 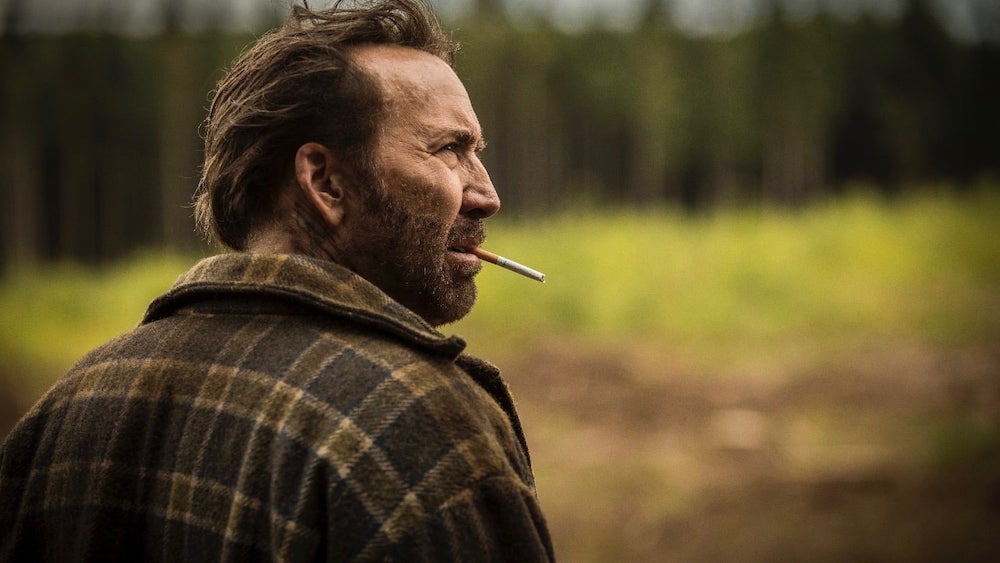 The audience is made to feel like a mesmerised passenger on a bad acid trip, unsure if what we’re seeing is a drug-addled reality or an unleashed netherworld. There’s a leather-clad biker gang known as the ‘Black Skulls’ (summoned by a mystical horn!) whom we’re told were a bunch of drug couriers who went insane after taking a bad batch of LSD… but they could be actual demons from Hell. They don’t look human. Is it coincidence one of these hell riders gets thrown down a big abyss? And did Red encounter a real tiger at one point, or was that all in his head because a T-shirt he wore had a tiger’s face emblazoned on the front? You decide.

Mandy is very much a style over substance sort of film, but what style! The whole movie looks like it was lit using red brake lights from parked cars, and the general aesthetic is a swirl of bruise purples and cherry reds. There’s billowing smoke (sometimes creepily filmed in reverse), and a general feeling that something unholy has been cracked open and is now manipulating your view of the world. In the last shot, the landscape appears to have been transformed into something from a pulp fantasy novel. 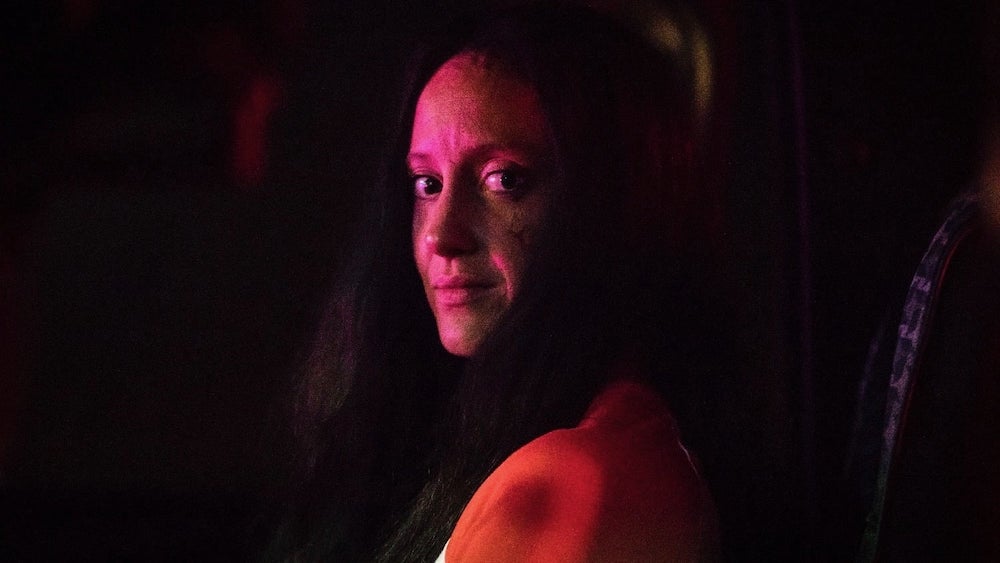 Benjamin Loeb (King Cobra) was responsible for the cinematography and it’s a great achievement, given added weirdness because Mandy evokes low-budget early-1980s horror flicks. It was filmed using the Arri Alexa camera and the Panavision anamorphic format, which gives everything the aesthetic of a vintage film with buzzy grain at times. Albeit one that has some modern flair and effects, which means it’s a beautiful fusion of old and new. There’s even a shoutout to Phantasm II (1988) with a chainsaw fight that does the same joke over their differing lengths, a mention of Marvel supervillain Galactus (added by avid comic-book reader Cage?), and none other than Bill Duke (Predator) as Red’s friend Carruthers, who helps him tool up Evil Dead II (1987) style against the “Jesus freaks”. 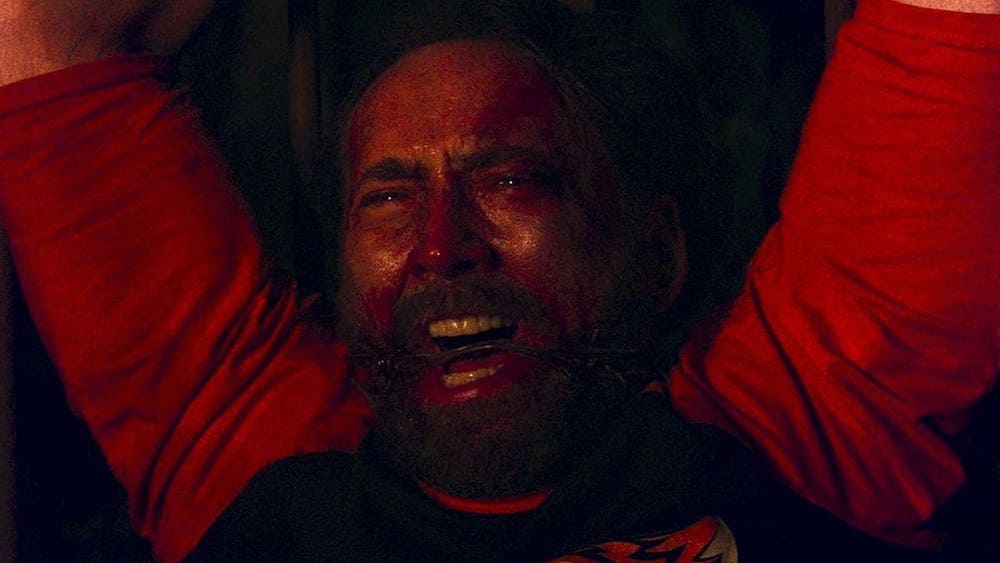 Icelandic composer Jóhann Jóhannsson (who died of an accidental overdose less than a month after Mandy debuted at Sundance 2018) was responsible for the soundtrack, which works simpatico with the Cosmatos and Loeb’s unnerving imagery and haunting landscapes. It’s full of synthy menace and perpetual groans, almost swallowing you into the screen.

Cage’s deranged performance is what anchors Mandy, ironically, as things might otherwise have become tedious at 121-minutes. There’s still a case to be made that Mandy would be improved with a shorter runtime, although its hypnotic mood may not have the time to get under your skin. Cage’s style of “Nouveau Shamanic” acting (as he refers to it) certainly isn’t to everyone’s taste, but his patented thousand-yard stares and rictus grinning feel right at home here. 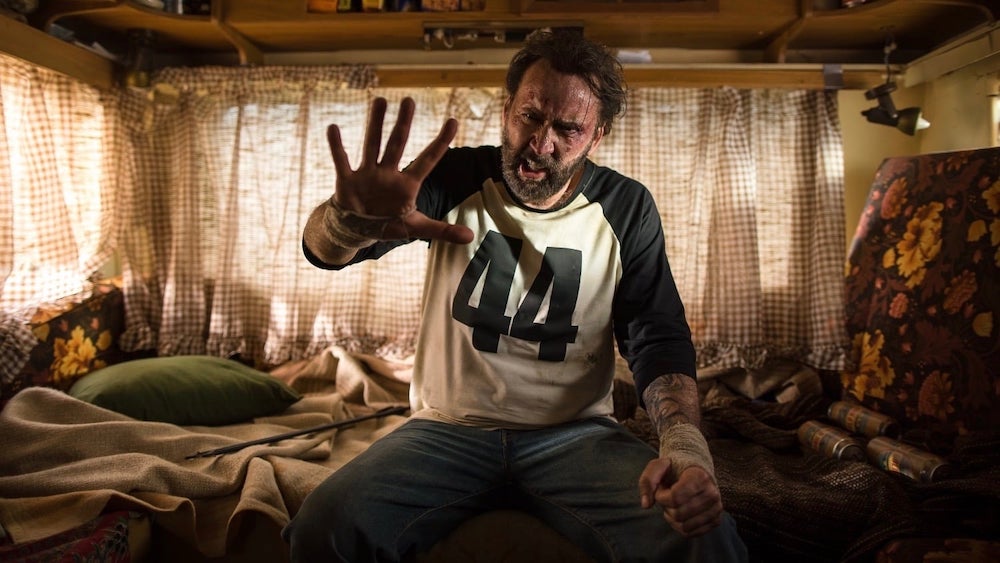 We needed a loony Cage because the story by Cosmatos and Aaron Stewart-Ahn is a straightforward revenge fantasy on paper, and Mandy’s dreamlike aesthetic will only get you so far. Cage rises to the challenge of creating a freaky character that compliments the trippy imagery but is “real” enough to make you care. Mandy could have been too abstract and alienating, but Red is someone who treats this terrible situation with enough seriousness—not goofiness. His grief after losing his lover is raw and heartfelt, and it feels plausible when he’s pacing around in an eyesore bathroom splashing alcohol on his wounds—weeping and wailing at the devastating memory of what befell his girlfriend. Red gradually sinks into an altered state of consciousness (after snorting cocaine and downing vodka to numb his pain), but that’s the point of his character’s beserker journey and descent into dark chaos. There’s a feeling that this cult operates on a different mental plane, so Red’s search isn’t purely geographical… it’s almost spiritual.

This movie certainly won’t be for everyone. Some will find it too long, or too bizarre, or too brutal, gruesome, and self-indulgent. It doesn’t hold your hand or ease you into things gently, it just offers a crimson fever dream riff on Death Wish (1974) that gets progressively more insane… and you can’t wake up until the bitter end. And I just love how Red and Mandy are two stoner characters introduced as lovers of heavy metal and fantasy novels, who discuss things like their favourite planets, and found peace with one another after battling their personal demons. (Mandy tells a particularly troubling childhood anecdote about being expected to help murder baby starlings caught in a sack). There was a suggestion, or so I thought, that the movie is just a nightmare Red’s having and he’ll wake up once Mandy shakes him. A part of me hopes that’s true. 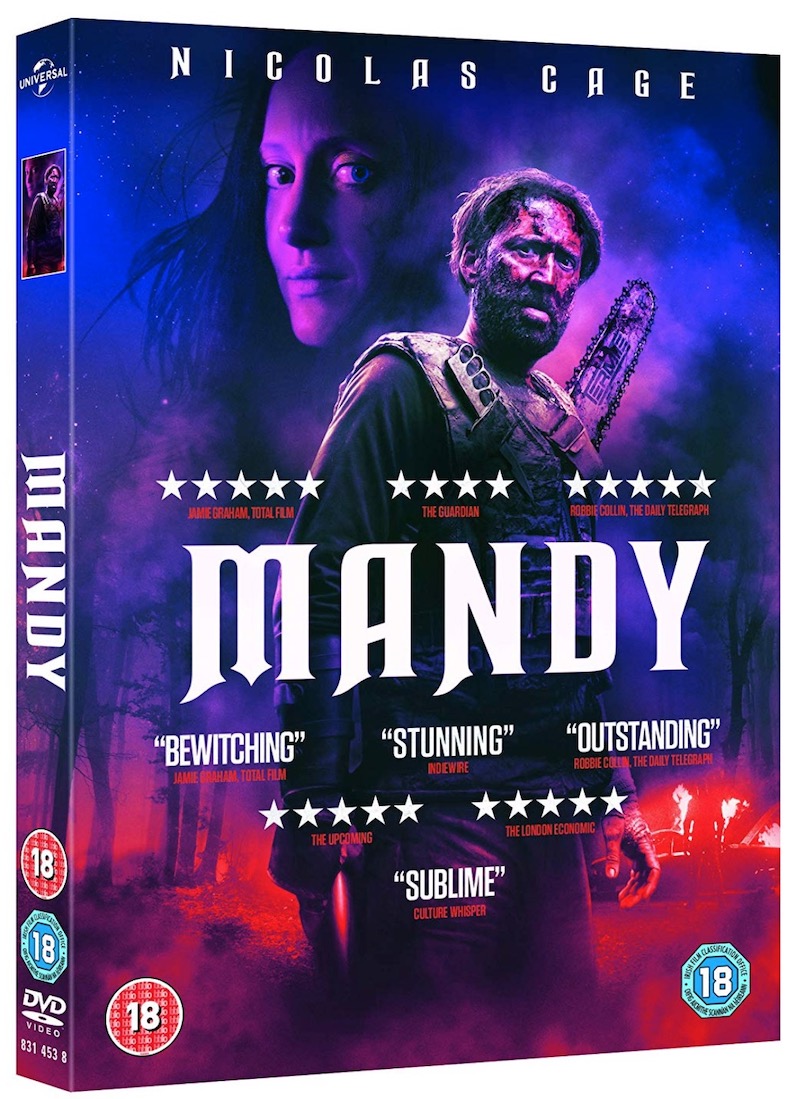 The 1080p Blu-ray does a good job replicating what Panos Cosmatos and Benjamin Loeb wanted to achieve, so the image looks film-like and there’s even intentional grain at times (likely added in post-production to give the movie more of a grindhouse feel, because it was shot digitally and wouldn’t have appeared otherwise on the Alexa camera). Colours are strong and details are good, although I’m disappointed there’s no 4K Ultra HD release for Mandy considering the HDR would have really made everything ‘pop’ better. As if to compensate slightly, the bitrate is a generous average of 28Mbps.

The DTS-HD Master Audio 5.1 track is better than the picture quality, as Jóhannsson’s score really hugs you into the movie’s peculiar feel. There are lots of good surround effects, particularly a memorable close-up of Jeremiah talking to Mandy when his face intermittently morphs into hers. The sound of his voice almost seems to hang in the air around you, putting you very much in Mandy’s spaced-out head.