The latest film from writer-director Joe Begos continues to refine an idea he started to explore with Almost Human (2013) and The Mind’s Eye (2015), as those were the director’s fresh take on Fire in the Sky (1993) and Scanners (1981). Here, Begos tries his hand at the vampire mythos, taking audiences on a blood-soaked, drug-fields voyage into violence and madness, while talking about the nature of creativity itself.

While the vampire sub-genre got watered down with the Twilight (2008) saga in the 2000s, recent versions such as A Girl Walks Home Alone At Night (2014) and Only Lovers Left Alive (2014), have attempted to return to the roots of the bloodsucking beasts. Begos reclaims the true horror at the heart of the genre, filled with drugs, sex, punk rock, and an endless supply of blood and gore.

Socialite and Los Angeles artist Dezzy (Dora Madison) is struggling in a seemingly never-ending creative rut. Unable to pay her own rent and dealing with professional stagnation, she throws caution to the wind and indulges in nights fuelled by alcohol and drugs with her friend Courtney (Tru Collins) and her enigmatic husband Ronnie (Rhys Wakefield). Gradually, her creative spark is reignited but, unfortunately for Dezzy, her hangovers leave her suffering from terrifying visions and a thirst for blood.

Dora Madison delivers an incredible physical performance as L.A gypsy-artist Dezzy. Known mostly for her work in TV series such as Friday Night Lights and Dexter, here she gives an unrestrained performance. Where other actresses might have shied away from certain scenes—including sex, drugs, and rock n’ roll—Madison throws herself into them head-on. Echoing Isabelle Adjani’s performance in Possession (1980), she’s a tour-de-force who managing to be both terrifying and a sympathetic sufferer of addiction. Relying on a super-drug called ‘Diablo’ to fuel her creativity, her mental decline thematically nods to David Cronenberg’s Rabid (1977) and Julia Ducournau’s Raw (2017).

Dezzy’s far from your typically written woman, which makes her more interesting. She’s fiercely independent, obnoxious, and hateful. Going against the likability factor of most female protagonists is a bold move by Bego and it’s refreshing to see a flawed female lead who doesn’t need a redemption arc. However, her nihilism does often become hard to swallow when she’s dealing with ‘scab nose’ posers. A specific scene sees a fan approach Dezzy at a dingy bar, only for her to respond with aggressive profanities behind her blacked-out Ray-Bans. It’s episodes like these that see her character resemble a cartoonish hipster rebelling at top volume.

Thankfully, Madison’s performance pulls focus away from the other paper-thin characters. Both appearing in the director’s previous feature The Mind’s Eye, Jeremy Gardner, and Graham Skipper put in a solid effort. Gardner as Dezzy’s on-off boyfriend Clive isn’t helpful in dealing with her situation, whereas Skipper as her drug-dealing friend Hadrian introduces Dezzy to the new form of cocaine—in a scene inspired by John Travolta and Eric Stoltz’s heroin shopping moment from Pulp Fiction (1994). Surprisingly they’re both given a little personality, unlike Rhys Wakefield’s (The Purge) character, with Ronnie and Courtney as walking hipster vamp stereotypes only interested in fulfilling their sexual fantasies with Dezzy.

Writer-director Joe Begos is a filmmaker with a gift for taking his cinematic influences and tossing them into a melting pot. Bliss contains essences of the incredibly cool vampire flicks of the 1980s such as Near Dark (1987) while delving into the exploitation spectrum with the stylings of Abel Ferrara’s Driller Killer (1979). Narratively speaking, Bliss should satisfy fans of Sean Byrne’s The Devil’s Candy (2017), as both feature artists who are slowly taken over by an evil entity in their quest to complete their ‘masterpiece’. However, Bliss is more concerned in presenting a psychedelic sensory overload. Which ultimately results in the feature becoming style over substance in the first two acts.

Until the final act, Bliss is primarily a psychological horror. We witness Dezzy wrestle with a high that no drug can compete with until she finally finds the urge to quench her bloodlust. Begos takes great pleasure manipulating our expectations as he puts his audience in the midst of Dezzy’s decent. Stylishly captured on super 16mm and drenched in neon light, Bliss is easily the director’s most visually distinctive movie. The grain and scratched film stock give the picture a gritty punk-rock aesthetic that evokes to the 1970s grindhouse era. And the grimy locations are saturated in a neon palette that is often mesmerising. Granted it takes 50 of the 80-minute runtime for it to find its footing as a hypnotic blood-drenched nightmare, but once it does, some of the vampire attacks are the messiest I’ve seen since Vampyres (1974) and The Living Dead Girl (1982).

Cinematographer Mike Testin (Dementia) uses his visual toolbox in a variety of ways to mimic the chaos consuming Dezzy. Similar to Danny Boyle in Trainspotting (1996), he captures falling bodies in slow motion as drugs take hold. Each shot becomes more claustrophobic and emphasises an encapsulation of fear. One particular sequence following an intoxicated Dizzy and Courtney at a gig is incredibly striking visually. The unnatural angles and dizzying camera work are easily comparable to Gaspar Noe’s Climax (2018). Begos and Testin guarantee there’s always motion, and whilst some may argue that it’s disorientating or distracting. It can also be argued that the director intended on taking the viewer over the edge of insanity with his female lead.

With the liberal use of incessant strobe lighting and editor Josh Ether’s (Beyond the Gates) copious amounts of jump-cuts, Begos captures each scene with a kinetic style that pours Dezzy’s madness directly into your brain. The opening sequence flashes with intense reds and green, helped by the thumping sound of heavy metal drums and punk rock guitars by Steve Moore (The Guest). The intoxicating fuzzy energy recalls the glory days of alternative 1990s MTV. The choice for hyperbolic style often becomes overwhelming diluting the substance of the director’s story. Disorientating and repetitive, it may be the filmmaker’s decision to make his feature feel like a pugnacious 80-minute-long music video. Regardless, the opening title card warning viewers suffering from heart conditions and seizures shouldn’t be taken lightly.

If you’re familiar with Begos’ previous features, it’ll be no surprise that the practical SFX is front and centre. The director adores these ’80s techniques and utilises them with confidence—they’re practical, brutal, intense, and surprisingly graphic. Made on only a shoestring budget, he unleashes grotesque images of carnage and chaos that would make David Cronenberg (The Fly), Wes Craven (A Nightmare On Elm Street) and John Carpenter (Halloween) proud. There are copious amounts of blood splattered torn flesh, snapped necks, and a severed Achille’s Heel that reminded me of Pet Sematary (1989). The VFX by Josh and Sierra Russel, who worked on Rob Zombie’s Halloween II (2009), find room for truly creative kaleidoscopic gore. One scene involving drinking blood from an eye socket will keep plenty of gorehounds happy.

Understandably, Bliss isn’t the easiest viewing experience. Graced with admirable and hallucinogenic imagery, it’s a carefully crafted visual experience. The exploration of creativity and addiction pays homage to stylish vampire flicks like The Hunger (1983) and Ferrara’s The Addiction (1995), with a riveting performance and attack on the sense. It sure gets one’s heartbeat racing. Scattered with obnoxious characters and a paper-thin plot can prove difficult to become emotionally invested in Dezzy’s journey… but Begos perfectly showcases his abilities as a filmmaker and proves he has a creative way approaching familiar elements in horror. 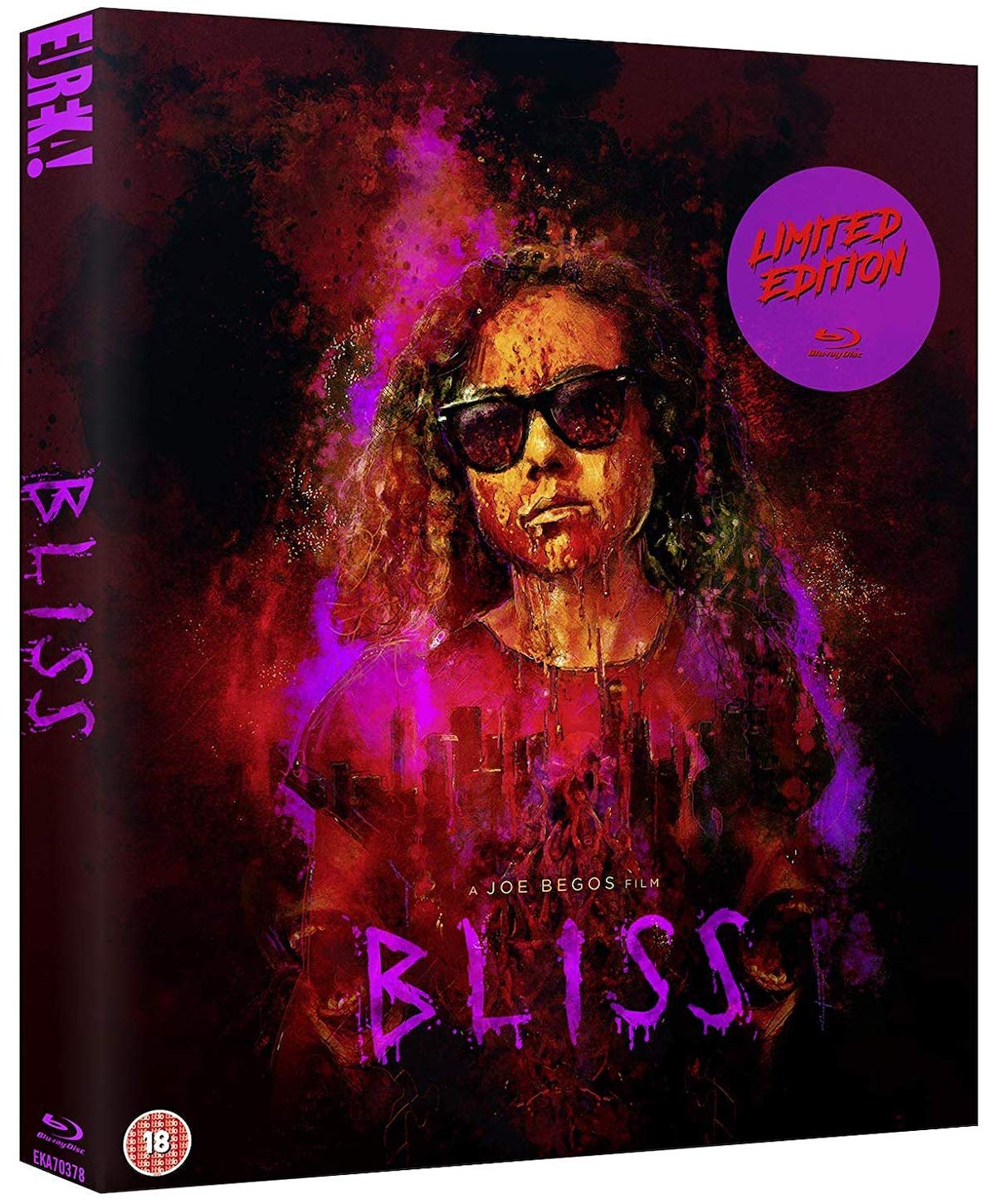 While most indie flicks are shot digitally, Begos chose to capture Bliss in glorious 16mm to maintain a raw B Movie aesthetic. The 1080p transfer in 2:39:1 aspect ratio looks incredible. The grain structure is prominent from the opening scene and scratches are scattered throughout as a stylistic choice by the director. Although this may be distracting for some, it perfectly captures the intended grindhouse/VHS look. The contrast is amazing yet dizzying. Vibrant neon colours are welcoming, alive and eye-catching (particularly against dark settings). Primaries are bold and dynamic in conjunction with the gritty visual aesthetic and subject matter. VFX are often bogged down by the lack of lighting, resulting in blood gaining a black sheen. However, certain scenes the level of detail will make one’s stomach turn. Begos direction makes Bliss a hallucinogenic experience.

Bliss drives on Blu-ray with a confident 5.1 DTS-HD MA uncompressed audio mix. Like the visuals, the audio presentation is an assault on the senses. Much of the experience lies within the heavy metal-inspired soundtrack from sound designer Steve Moore. It’s an intense mix of twisted themes and instrumentation, with screeching guitar riffs leaning into the punk territory, while the atmospheric melodies blend into hypnotic psychedelia. Bass is mostly reserved for various musical choices and SFX adding a sense of depth during characters’ drug-infused state of mind. The front of the soundstage handles the dialogue which is audible the majority of the time. However, during enclosed settings surrounded by live music can become difficult to hear.