Kumail Nanjiani is a Pakistani-American stand-up comedian, best-known outside of the US for his role in HBO’s Silicon Valley. The Big Sick is a semi-autobiographical rom-com about how he met his wife Emily V. Gordon (played here by Zoe Kazan), who co-wrote this movie with her husband. You’d think their story must be pretty extraordinary to form the basis of a two-hour film, and it’s certainly an unusual courtship that segues into an indie version of Meet the Parents (2000) for awhile. It also allows for an amusing and insightful look at Muslim culture in modern America, as Kumail’s immigrant parents (played here by Anupam Kher and Zenobia Shroff) fully expect for their son to fall into line with a traditional arranged marriage.

The problems arise when Kumail (playing himself) notices a cute heckler called Emily in the crowd at one of his gigs, whom he soon develops a lighthearted and enjoyable relationship with. But their happiness is thrown awry when Emily realises Kumail hasn’t even mentioned she exists to his parents, who’d disown him if he chose a “love marriage”. And, more pressingly, Emily falls victim to a lung infection that means she has to be placed into a medically induced coma… 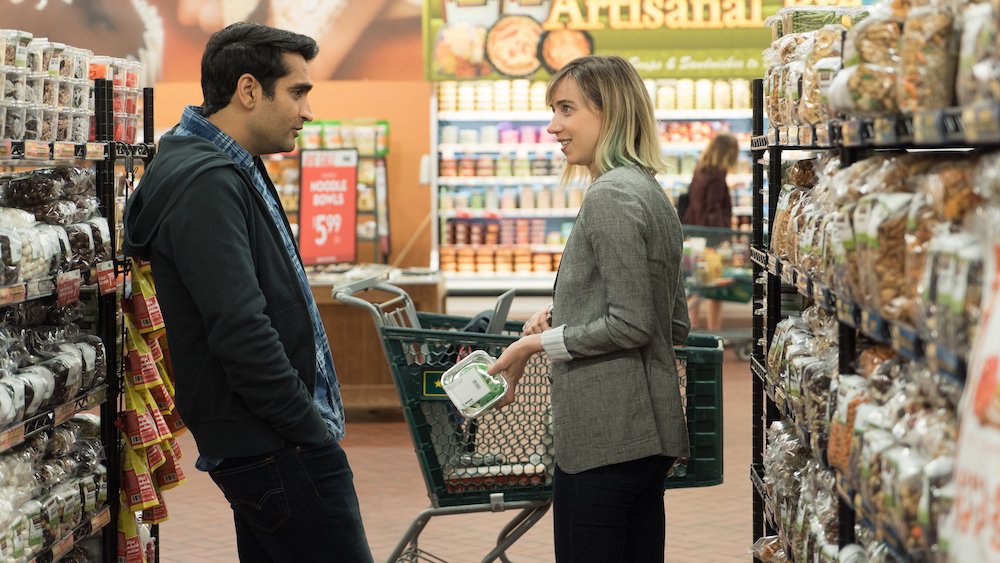 And this leaves Kumail in the awkward position of being technically dumped by his girlfriend hours before she became seriously ill. His parents don’t know about Emily, so can’t offer any emotional support, so Kumail focuses his energies on getting to know Emily’s own parents after they rush to be by their daughter’s bedside: Beth (Holly Hunter) and Terry (Ray Romano), a couple also going through their own relationship issues.

In some ways The Big Sick is a frustratingly predictable affair, as it looks and feels like countless other indie rom-com, but that’s infinitely preferable to the kind of low-brow comedy that gets pumped into multiplexes otherwise. I’m talking about the half-improvised stuff starring the same half-dozen actors in similar roles, where creatively-worded insults and gross-out humour is the order of the day. 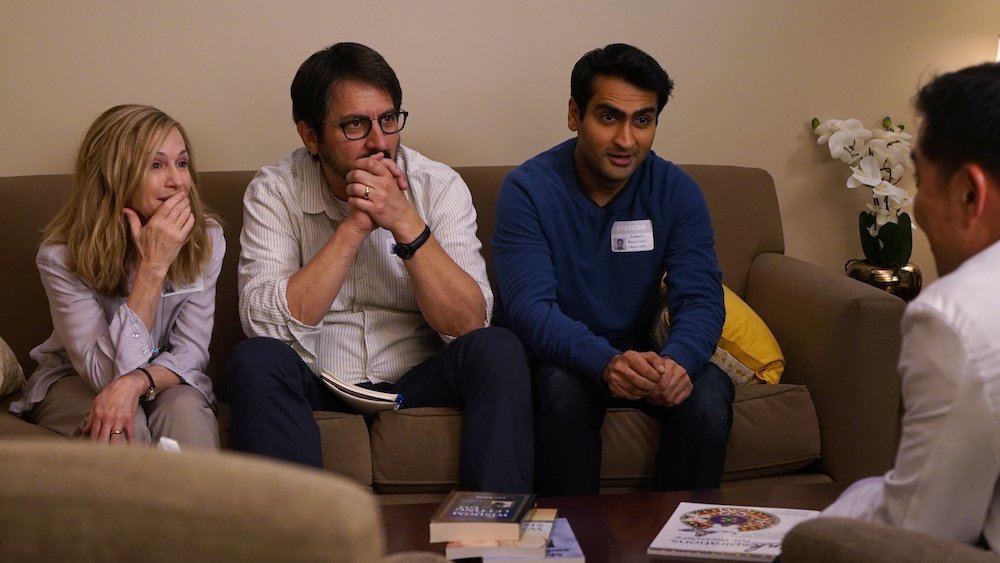 Judd Apatow has built an empire on that kind of thing after Knocked Up (2007), but his company are also behind The Big Sick. It was such a success at the Sundance Film Festival that Amazon Studios picked up the distribution rights, which is understandable. It feels like a breath of fresh air; a comedy that doesn’t rely on easy laughs or debauchery, that has a human story to tell with characters you can believe in. There are also some fantastic turns from Hunter and Romana (as very plausible and relatable “in-laws”), and nobody really puts much of a foot wrong. Nanjiani acquits himself well as the romantic lead, and you certainly find yourself hoping for a happy ending that seems impossible to really avoid.

There are a few areas that disappointed me, unfortunately. The movie’s amusing, but rarely laugh-out-loud or memorable in terms of any standout lines or set-pieces. It plays more like a straightforward drama with regular funny bits, mostly because Kumail’s job as a stand-up means the drama it leavened with scenes at various gigs in a Chicago comedy club. The strange thing is that some of the jokes and banter between the comics, mixing together backstage, don’t come across as very funny. There are actually some incredibly weak lines from the comedian characters, and I’m not sure why the standard of material wasn’t much higher there. 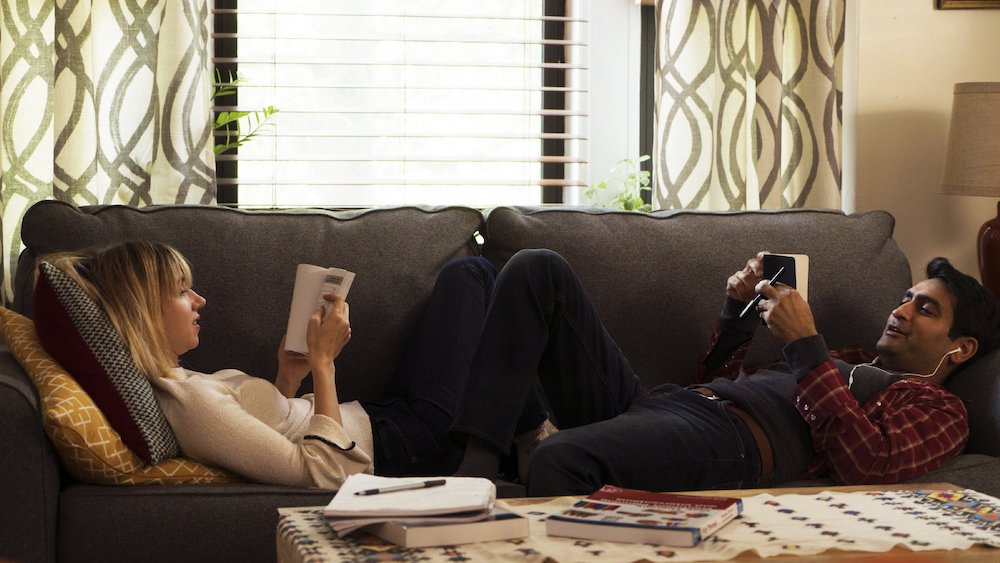 Still, that’s perhaps unfair, because The Big Sick gets almost everything else right. I particularly enjoyed the middle of the movie (which is a rarity in general), when the story pivoted into Kumail slowly bonding with his (ex?) girlfriend’s parents after meeting them for the first time under terrible circumstances. It’s a strange scenario I haven’t seen portrayed on film before, so I was glad The Big Sick spent so much time on it. I was more invested in Kumail making a good impression on Beth and Terry than I was in him patching things up with Emily, weirdly.

Thankfully, The Big Sick performed relatively well at the box office this year, making $54 million from a $5m investment. It didn’t set the world alight and it likely slipped by most people, but it found a small but appreciative audience. Its destiny as exclusive offering on Amazon Prime will certainly help it reach even more eyes. You used to get these kind of character-based comedies, touching on serious issues, all the time in Hollywood… but sadly they’re a dying breed. The direction by Michael Showalter (Wet Hot American Summer) isn’t flashy but he keeps things moving along very nicely, so the slightly too long runtime never becomes a chore. 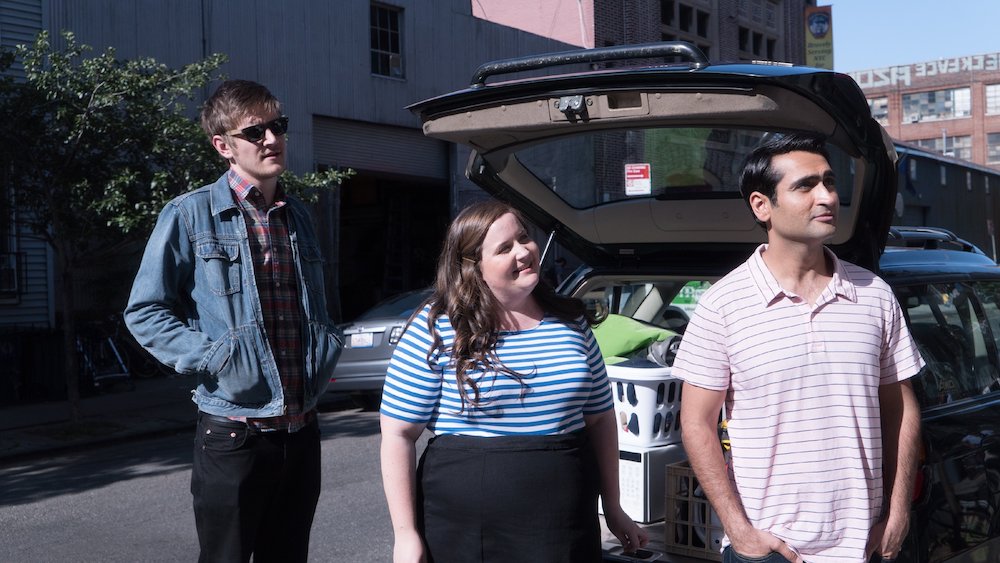 It’s the script that really works to make The Big Sick an easy recommendation, although I could have done with it being a little edgier and more unpredictable. The real Kumail and Emily clearly wanted to paint their romance as a positive if odd affair, but there are times when it’s so thoroughly pleasant it misses the chance to take things down a slightly darker path to the same ending. Maybe, given the coma “twist”, my British cynicism had me primed for something a lot more uncomfortable. Even the movie’s one downbeat element (the fallout with Kumail’s parents when they learn the truth), is given enough levity to means you don’t feel anxious about anything.

Taste and tolerance will vary, but if you’re the kind of person who demands a happy ending after some peculiar bumps along the way… The Big Sick is just what the doctor ordered.