Likeable enough, never boring, but self-consciously hip and proclaiming an edginess it doesn’t really have, The Beach resembles nothing so much as its main characters. Sure, it’s fresh and energetic and imaginative on the surface, just like them… but, underneath, there’s not a lot to care about in this tale of an Asian backpacker idyll gone predictably wrong, based on Alex Garland’s well-received 1996 novel.

Much of the movie is summed up, in fact, by the first lines, where Leonardo DiCaprio introduces himself in voiceover (“my name is Richard”) before pronouncing that family, background, and suchlike don’t matter when you’re a traveller (not a tourist). Of course, what he’ll discover is that, while you can fly away from your hometown easily enough, you can’t so quickly shrug off the moral and cultural values it instilled in you. And we will find out that DiCaprio in this voiceover is speaking ironically, long after the film’s events. 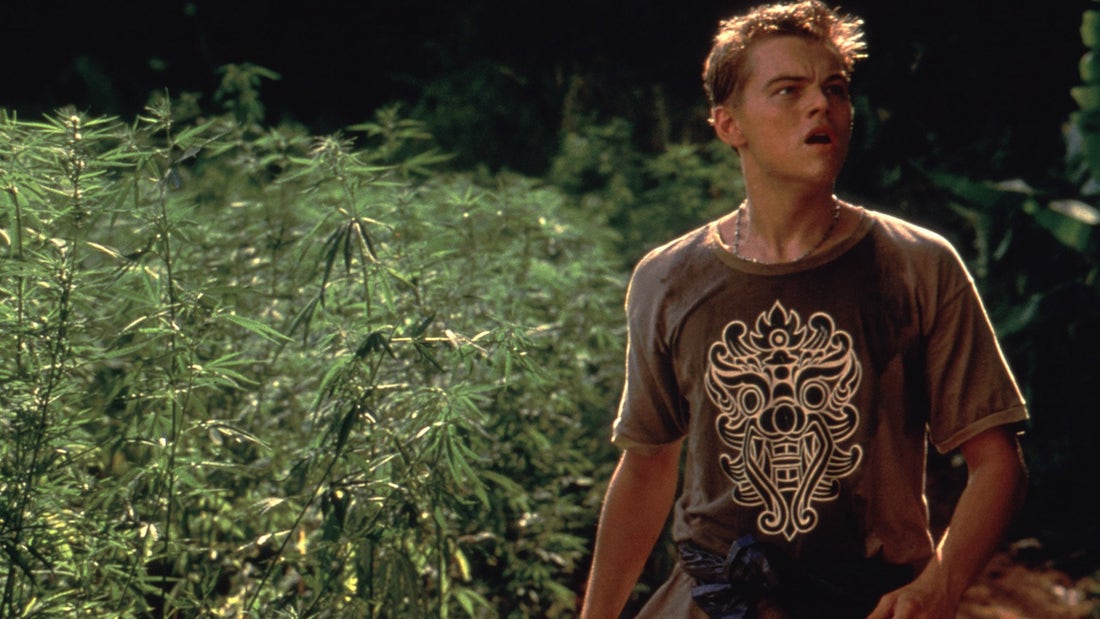 For much of The Beach’s runtime, its makers seem to believe they’ve successfully moved beyond dull, old-fashioned concepts like rounded characters or a compelling storyline. And then, just as DiCaprio eventually learns that even while backpacking in Asia he’s still a middle-class American guy, The Beach reverts eventually to a peculiar and perhaps unexpected conservatism. Once director Danny Boyle and writer John Hodge have had their kicks with the Thai locations and the sex and the drugs and the look-at-me-aren’t-I-original camera effects, The Beach ends up oddly implying that alternative lifestyles in foreign locales are rather dangerous and possibly best avoided.

The plot is simple, and despite its superficially realistic up-to-the-minuteness, it’s so packed with the stuff of fairy tales or adventure stories—a legendary isle, a map, a sea monster, a wicked witch—that it’s tempting to wonder whether it might not all be DiCaprio’s doped-up Richard dreams in some sweaty Bangkok hostel. That is, indeed, where it all begins as he meets Daffy (Robert Carlyle) and receives from him a map purportedly showing the location of a secret paradise on a small island, the beach of the title. 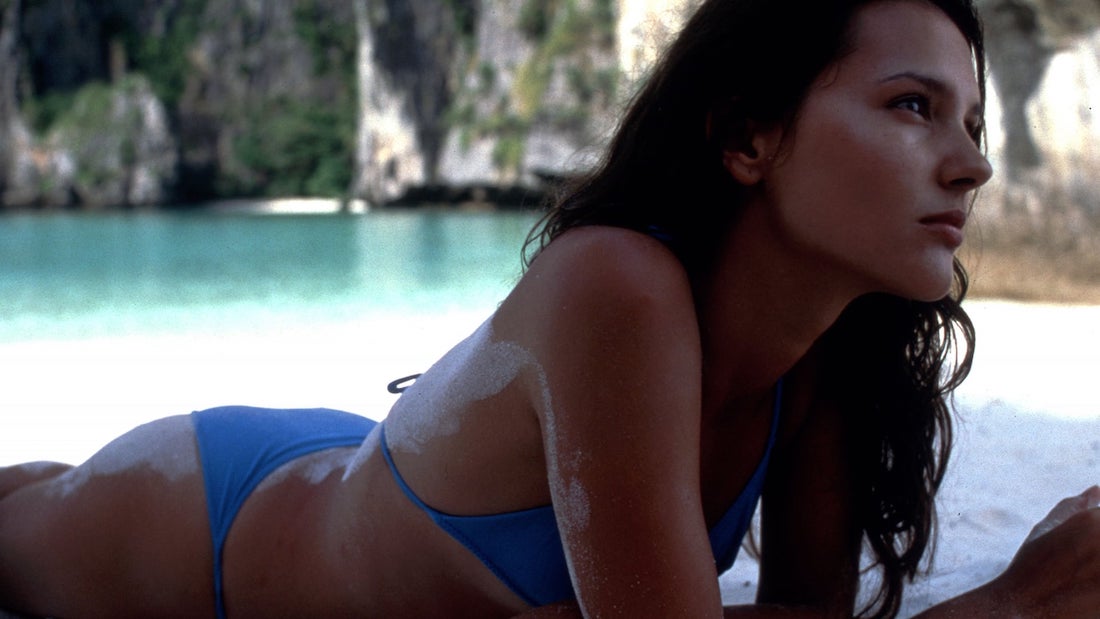 Richard next hooks up with French couple Étienne (Guillaume Canet) and Françoise (Virginie Ledoyen), who we shouldn’t call characters because they don’t have any characteristics. Étienne’s sole dramatic purpose is to act as a bland voice of common decency when things go off the rails, while Françoise exists only to have a fling with Richard and thus provoke further decency from Étienne.

After not very long, and a few minor escapades in which it’s patently clear that they won’t drown, be shot, etc., they find the titular beach. Here things become slightly more intriguing, as it turns out to be not just a beach but a little community of privileged westerners in search of a simpler lifestyle. Within limits, of course, as Richard observes in voiceover it’s “a beach resort for people who don’t like beach resorts.” Moreover, it’s ruled (she wouldn’t use the word, but it’s the right one) by Sal (Tilda Swinton), and it’s her insistence on preserving the community at all costs that lead to eventual disaster.

That’s pretty much it as far as plot goes, and one of the central problems with the movie is immediately evident: with the exception of Sal, nobody in The Beach has much in the way of goals they’re pursuing or problems to face. They’re mostly just content to take each day as it comes. 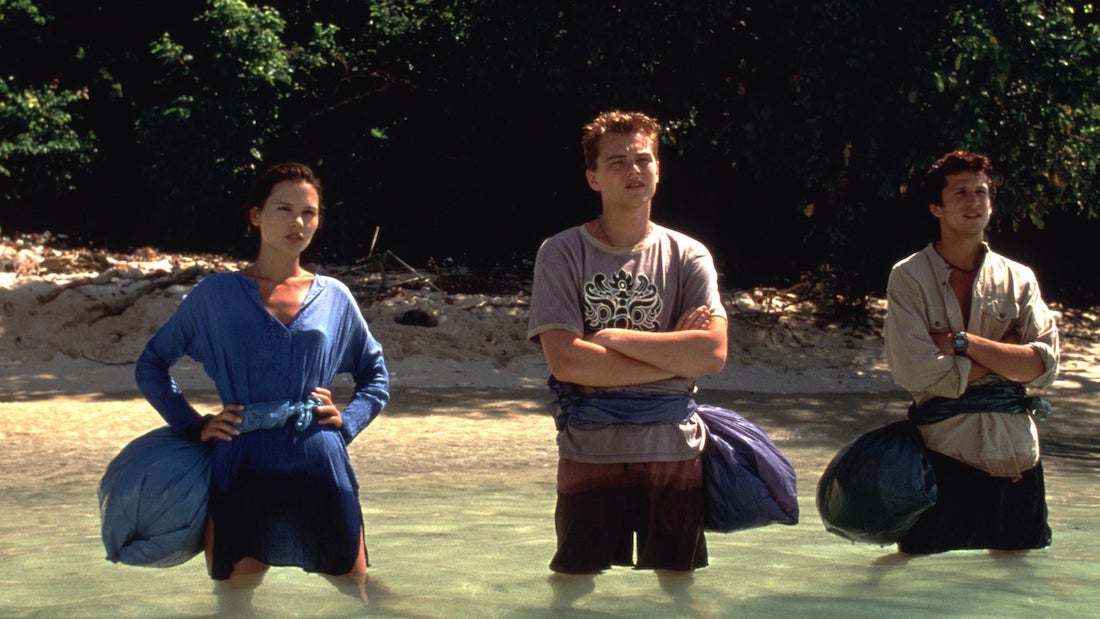 As a result, nearly all the narrative twists and turns have to derive from Sal and her decisions; and even then, at least until the end, the rest of the commune tend to obey her without complaint. When she banishes Richard to a hillside for endangering the community’s secrecy, he doesn’t fight back, or plot against her. He just goes and hangs out on the hillside. This may be quite believable, but it doesn’t make for high drama.

Boyle and cinematographer Darius Khondji do their best to make up for this problematic stasis at the heart of The Beach with an array of razzle-dazzle visuals, which became Boyle’s trademark: time-lapse photography, aerial shots, light trails, and of course the famed sequence where Richard appears to be running within a video game. Composer Angelo Badalamenti obliges with a terrifically varied score, and the soundtrack (also including 13 songs from the likes of Blur, Moby, and Leftfield) plays a large role in keeping the film alive.

Many of the performers help with that, too, and if their characters are a bit affectedly “characterful” then so, of course, were many of their counterparts in real life. The stand-out is Swinton, extraordinarily self-contained and not a little chilling in her utter determination. If she doesn’t look the nearly-40 she was when the movie came out, though, the most striking thing to contemporary eyes about DiCaprio is how young he looks (he was about 25). 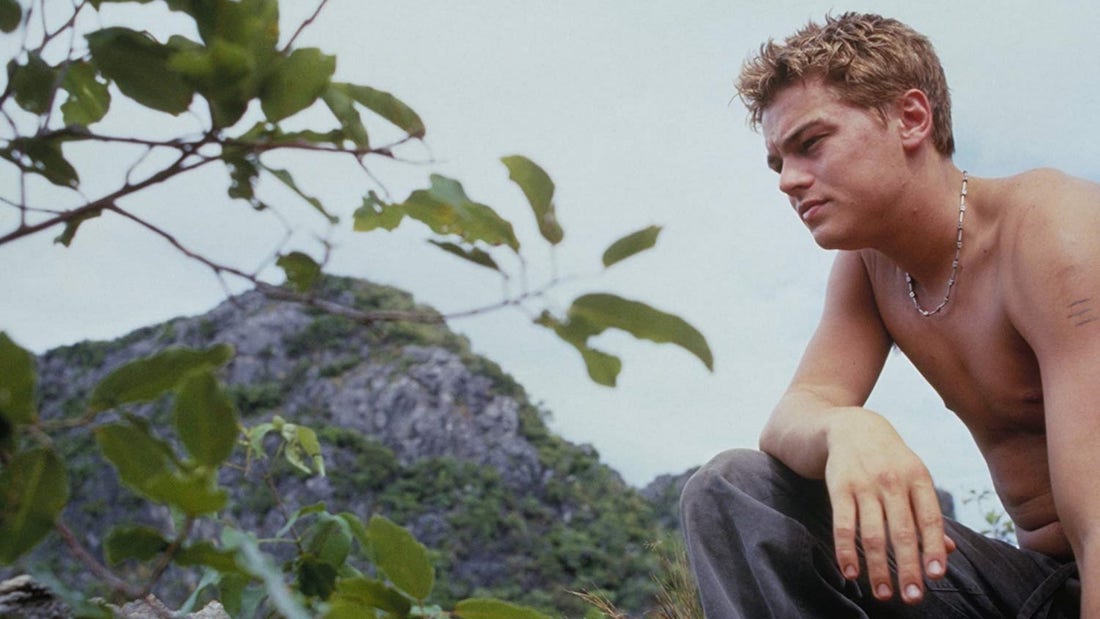 His characterisation of Richard is initially uninteresting, but that’s surely intentional… because at the start of the movie Richard’s bland and just another young guy in search of excitement. DiCaprio captures his naivety nicely, mixing slight over-enthusiasm (look at the way he walks) with conservative caution. As his voiceover confesses, he’s “shit-scared of the great unknown, desperate to take a little piece of home with me”.

As the film progresses he discovers a much darker side in himself (indicated by Boyle with rather ham-fistedly obvious allusions to Apocalypse Now), and DiCaprio carries off this sudden change without too much abruptness. Already, at this stage of his career he was showing signs that he would mature into the masterful actor of movies like The Revenant (2015) and Once Upon a Time… in Hollywood (2019), even if many at the time still saw him as the teen idol of Titanic (1997).

However, though it’s a fault of the script more than the actor, DiCaprio’s transformation in The Beach is never followed through. By the conclusion, he’s suddenly a nice guy again, with the result that retrospectively the more devious, feral aspects of the character seem unconvincing. We have to believe that either the malign power of Swinton’s Sal… or even, less plausibly, the jungle itself… altered him temporarily. Both notions are close to silliness, but it’s certainly true the island itself starts to feel as oppressive as any particular danger it contains. 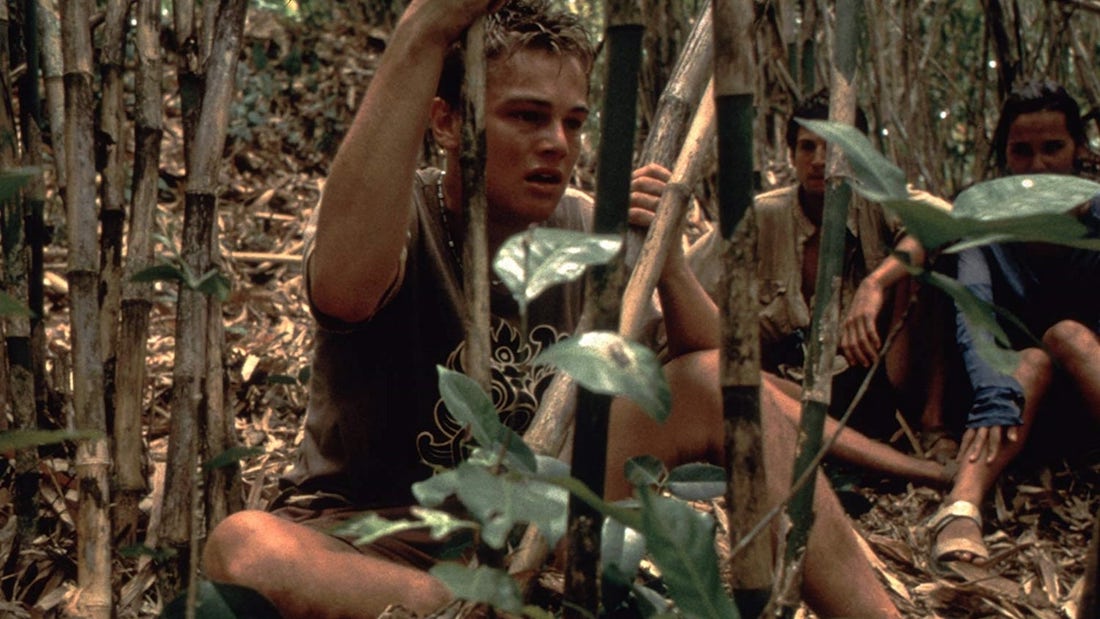 Also notable in the cast is Paterson Joseph as Keaty, a cricket-playing, Daily Telegraph-reading member of the beach commune who seems more genuine (in every sense) than most. Daniel Caltagirone is fun if OTT as its chef, nicknamed Unhygienix after the Asterix character, while in early scenes Carlyle makes an effectively unnerving contrast to the more conventional DiCaprio.

Canet and Ledoyen do what they can with their parts as the French pair, but the script asks surprisingly little of them, even though for a long time it gives the (misleading) impression that Ledoyen’s Françoise might become core to the plot and that Richard’s lust for her will be the source of trouble in paradise.

Some individual sequences stand out, too, many of them involving a criminal gang that guards a marijuana plantation elsewhere on the island, and there is some genuine humour, largely unsophisticated and physical. One of the most powerful—to be frank, one of the few powerful—elements in the film, though, involves Canet’s Étienne tending a wounded commune member. Upset by his screams as gangrene spreads through his body, the rest of the travellers have confined him to a tent distant from their settlement, so they can party in peace. 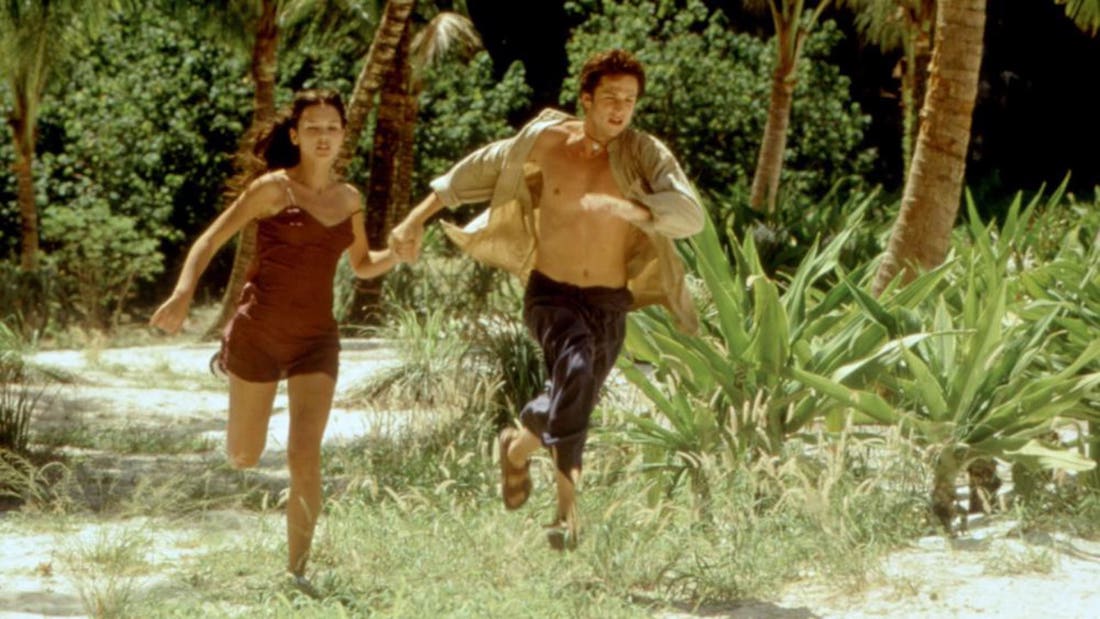 Clearly The Beach is trying to make a point here: that for all their talk of community and seeing the world, the travellers are ultimately selfish and unwilling to get too close to reality. But at other times, it’s not quite clear what (if anything) it’s trying to say! This movie is blatantly packed with themes—from colonialism to tourism, to the Vietnam War to Lord of the Flies (plus added weed), to the danger of secrets—yet it’s difficult to escape the notion that they’re nothing more than vaguely cool-seeming concepts thrown in to give it, you know, relevance.

And then, in the final moments of the movie, there’s a weirdly positive summation in DiCaprio’s voiceover: “If you find that moment [of perfection], it lasts forever.” It’s not clear whether he’s referring to the commune in general, or Ledoyen’s Françoise specifically, but in any case, it’s painfully at odds with the traumas that precede it. Either Richard has completely failed to learn the lesson of his experience, or the movie has completely failed in getting across to us whatever it’s trying to say.

The Beach did well at the box office in 2000. It was not a spectacular hit like Trainspotting (1996), which had put director Boyle and writer Hodge on the map along with producer Andrew Macdonald and Robert Carlyle (all of them reunited for The Beach), and nor did it gain the same acclaim. But for those behind the camera, it was a welcome return to success after the fiasco of A Life Less Ordinary (1997).

It was not as celebrated critically as Garland’s novel, either, and departs from the book in several key respects—not least the protagonist’s nationality. The novel’s Richard is British and Sal’s American, but the movie reverses their origins, presumably to accommodate the casting of DiCaprio. (Ewan McGregor, another one of the Trainspotting team, had originally been intended for the role and his relationship with Boyle was sour for years when he plumped for the better-known DiCaprio.)

The Beach suffers from a central lack of dramatic drive, with plot threads introduced but barely developed. It lacks a single, clearly identifiable challenge which would have us rooting for DiCaprio, or at least interested in his fate. The characters are mostly just outlines, so we don’t feel we know them, or even care about them. It can seem quaintly dated as well (Thailand as the height of exoticism!) and it probably isn’t done many favours by the small screen.

None of this is to say it’s terrible, of course. Swinton’s terrific, DiCaprio is subtly impressive, and the locations are certainly interesting. There are some smiles, there are a few edge-of-the-seat passages, and there’s a shark (always a plus)… but it’s impossible not to suspect that Boyle and company set out to make a big profound statement about the zeitgeist, or something, and ended up saying nothing much at all. 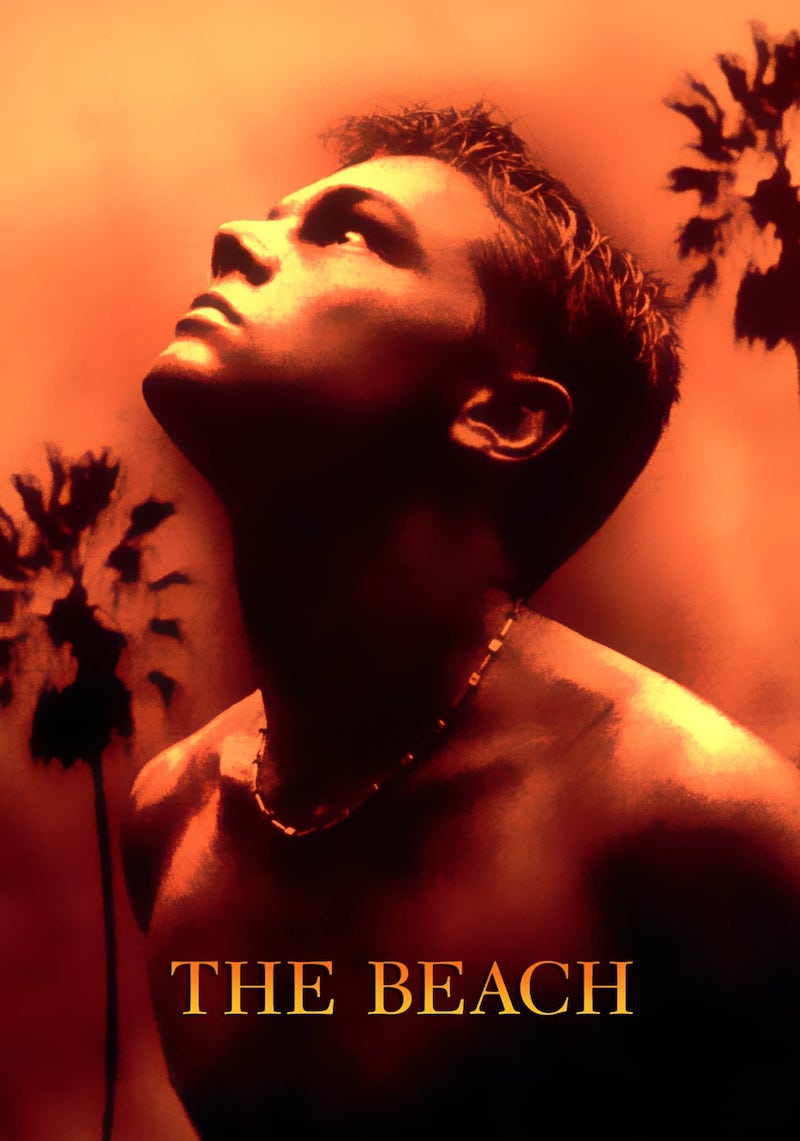