Marvel films have gone big before. They’ve launched an alien invasion onto New York for The Avengers, seen half of London uprooted in Thor: The Dark World, and sent an entire city very literally crashing to the ground in Avengers: Age of Ultron. But they’ve never gone bigger than this. That’s not to say Captain America: Civil War’s scenes of destruction eclipse those previous spectacles; rather it’s the emotional highs that hit big. This is a film where almost a decade of character development comes to a head… and the payoff is enormous.

The first hour or so is very much of a piece with Captain America: The Winter Soldier, as The Avengers—Captain America (Chris Evans), Falcon (Anthony Mackie), Scarlet Witch (Elizabeth Olsen), Vision (Paul Bettany), and Black Widow (Scarlett Johansson)—engage in a mission that again results in inadvertent collateral damage. Their handiwork proves to be the final straw, however, as the UN decide that ‘enhanced beings’ need to be kept in check. The Sokovia Accords are drafted, and—having recently been given a very pointed reminder of the damage his actions have wrought—Tony Stark (Robert Downey Jr.) agrees to sign it. Steve Rogers, ever the principled freedom fighter, refuses, seeing only red tape that will make them government pawns and stop them being able to do their job. And thus, The Avengers are split. Cap and his allies go rogue, while Iron Man and his ilk are officially ‘on the books’. 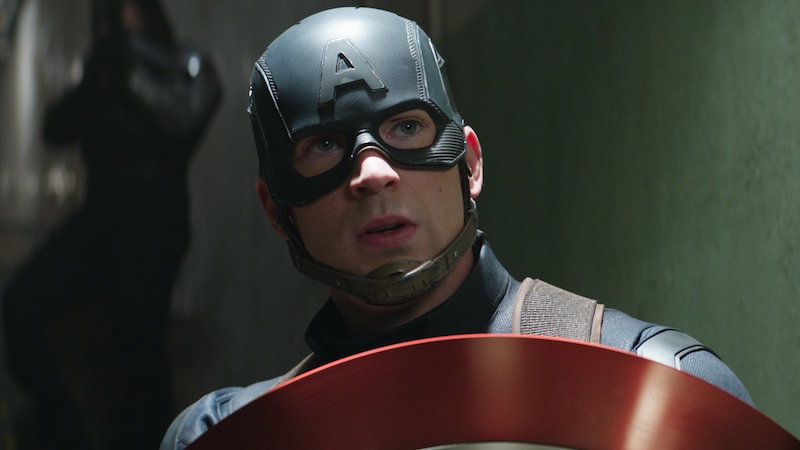 Muddying the waters further are Daniel Brühl’s scheming villain Helmut Zemo, and Sebastian Stan’s Bucky/Winter Soldier—who appears to have reverted to past form by carrying out a terrorist attack. But while Cap has reason to believe his old buddy’s innocent and moves to protect him, Iron Man’s tasked with bringing him in… leading to the titular Civil War.

The political wrangling over the issue of whether The Avengers should be regulated is well handled, with neither side necessarily wrong. The dilemma brings to mind the television series 24, where Jack Bauer and his superiors spent years wrestling over whether the ends justified the means. And at this point, after twelve films, the Marvel Cinematic Universe (MCU) isn’t doing any hand-holding. If you’ve not seen the rest of Marvel’s output, chances are you’re going to be very lost—particularly given the proliferation of the franchise’s myriad supporting characters (although The Winter Soldier and Age of Ultron are the only must-sees you’ll need to fully prepare). Directors Joe and Anthony Russo do an impressive job of juggling the largest Marvel cast to date, and nobody feels like they get lost in the mix. There’s a subplot between Vision and Wanda Maximoff that bubbles along nicely, and Clint Barton/Hawkeye (Jeremy Renner) continues to be the franchise’s earthy, unsung hero.

There’s even room to introduce a few new faces, as Chadwick Boseman makes his debut as Prince T’Challa of fictionalised African nation Wakanda—a man better known as the Black Panther. T’Challa’s introduction is economical, and Boseman’s noble and quietly powerful turn informs everything you need to know about the character. T’Challa aside, Civil War benefits from not really having to introduce anyone: it justs gets on with telling its story, and trusts that we get it. This is perhaps epitomised with the much publicised return of Spider-Man into the MCU (as part of a licensing deal with Sony), and it’s with his appearance that the film truly comes alive. 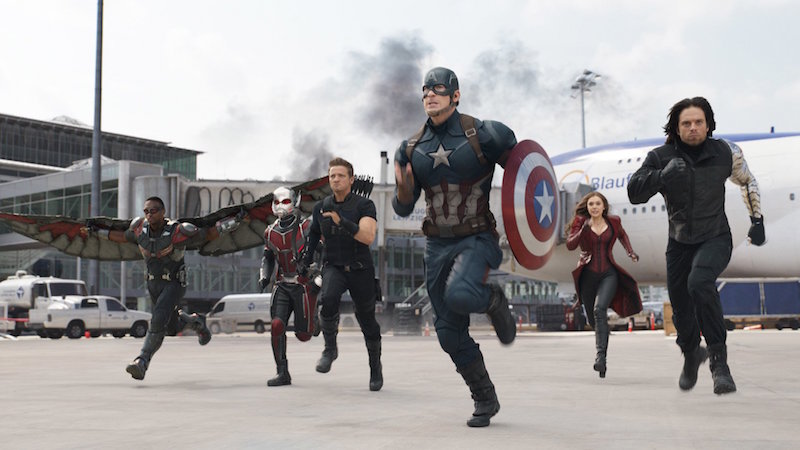 Forget the previous screen incarnations of the famous web-slinger—just put them out of your mind. Marvel have (part) control of the character back, and boy does it show. This is a perfect depiction of one of their most famous stars. Peter Parker is exactly what he should be: he’s a kid—just a kid!—who’s a motor mouth and science nerd; a fundamentally good-hearted person who wants to help, even though he may not know how. Tom Holland proves to be an inspired piece of casting, and his enthusiastic performance is infectious in its energy. That his introduction refuses to rehash Spidey’s back-story is further cause for celebration. Everyone knows the broad strokes of the Spider-Man mythology by now, and the Russo’s masterfully re-introduce him with just a few short lines of dialogue. Whoever ends up directing the next Spider-Man film has a lot to thank them for.

Spider-Man’s vivacity and banter with the rest of The Avengers—he’s an overexcited teenager thrown in with the big boys, and part of him still thinks it’s all just a big game—bring a much-needed dose of humour and lightness to the film, beyond Falcon’s choice one-liners. There’s also pleasing meta-commentary, such as someone finally suggesting they just aim for Cap’s legs, and the film even steers into the skid with lines about the controversial casting of Marissa Tomei as a “young” Aunt May. 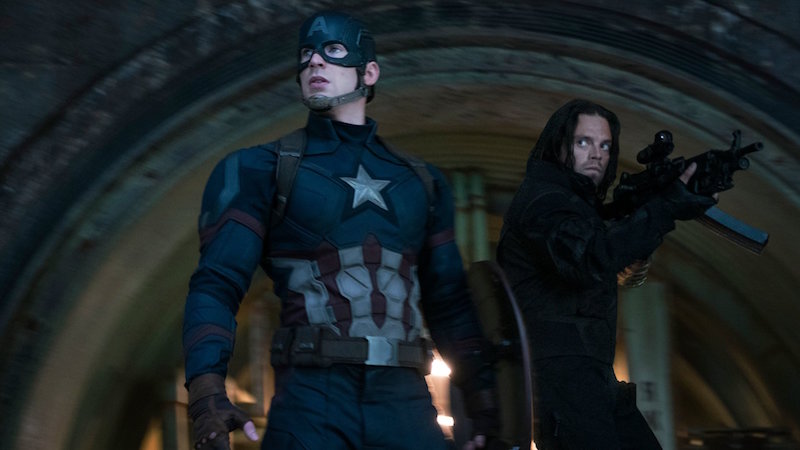 Civil War is foremost an action movie, and the fights are crunching affairs throughout. At times they’re shot with an almost Bourne-like level of freneticism. Stan’s Winter Soldier remains a terrific figure for action—his enigmatic character design coupled with such raw physicality make him more engaging to watch than his famous friends and enemies! But it’s the centrepiece battle at a German airport that’ll get people talking. With every character facing off against one another, the entire sequence is frankly gob-smacking. The screenplay gives every character a moment to shine and having so many different superpowers on display at once makes for some inventive action. The choreography throughout is breath-taking, and there are some jaw-dropping surprises thrown into the mix. How the script manages to keep its grasp on the characters is what really makes this sequence sing. The sense that these people are still friends makes for great internal conflict that only enhances their melee. How far are they really willing to go to hurt—perhaps even kill?—one another to defend their beliefs?

The climactic battle—the inevitable showdown between Tony, Steve, and Bucky—is also more powerful for being informed by character (it would seem disingenuous to refer to it as being Iron Man vs. Captain America and Winter Soldier). Narrowing the playing field to this trio gives the finale a much greater focus, with genuine emotional heft. This isn’t just a collection of pixels pummelling one another; under the CGI, these are people and this brawl means something. The fact there’s ostensibly no bad guy in Civil War makes it even more affecting, as everyone’s fighting for a cause instead.

If there’s one complaint to be made, it lies in the overly convoluted plot and thinly developed character of Brühl’s villain, but that’s a minor quibble. While Civil War is technically the first part of Marvel’s ‘Phase Three’, it really acts as a triumphant climax to the first half of the MCU’s ongoing saga. The promise for the future is strong—Spider-Man steals the show in terms of action and dialogue, while glimpses of the futuristic African nation of Wakanda are hugely exciting—but for now Captain America: Civil War stands as one of the studio’s crowning achievements in their ambitious, interconnected universe.