Everyone’s forgotten Marvel already made a successful superhero movie with a black lead actor, Blade (1998) with Wesley Snipes, but it’s fair to champion the “breakthrough” nature of Black Panther two decades later. It’s a comic-book movie where white actors are the minority, and everything’s predicated on the topsy-turvy fantasy of a African nation being the apex of mankind’s technological achievements. The fictional Wakanda is a Third World country ruled by a king who protects his people by donning a tight black catsuit, endowed with super powers thanks to the magical properties of a purple herb.

Wakanda is essentially a landlocked Themyscira from DC’s Wonder Woman (2017), but with the more interesting wrinkle that its population have evolved developing beyond primitive weapons and riding horses. It’s a gleaming “futuristic” city of towering skyscrapers and underground magnetic monorails, with “flying saucers” whizzing around, and advanced medicine that can heal bullet wounds in a day. 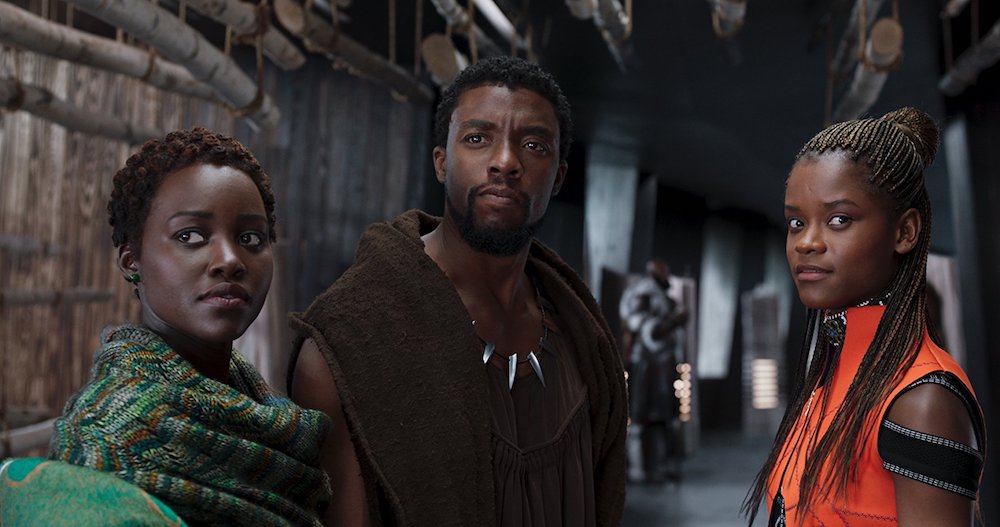 After being introduced to this modern wonder, kept hidden behind an illusory “impenetrable rainforest”, a multitude of questions pour through your mind about the ramifications of a real El Dorado existing. Thankfully, such questions fuel much of the story and the villain’s perspective on Wakanda, ultimately leading to a nice companion to Robert Downey Jr.’s press conferences that ended Iron Man (2008), only this one’s about an entire country stepping out of the shadows. Less “I am Iron Man”, more “We are Wakanda”.

Black Panther is an increasing rare MCU movie that doesn’t seem to partly exists to further the wider ambitions of the Marvel cinematic brand. It plays like a ‘Phase One’ movie in that respect, which I suppose most origin movies tend to — like Doctor Strange (2016). It’s very self-contained with no walk-on cameos from other MCU stars, although familiarity with Captain America: Civil War (2016) helps give added background to black marketeer Klaue (Andy Serkis) and CIA agent Ross (Martin Freeman) — the latter of whom becomes a Felix Lieter-style comrade of hero T’Challa (Chadwick Boseman) during a Bondian sequence set in a South Korean casino. 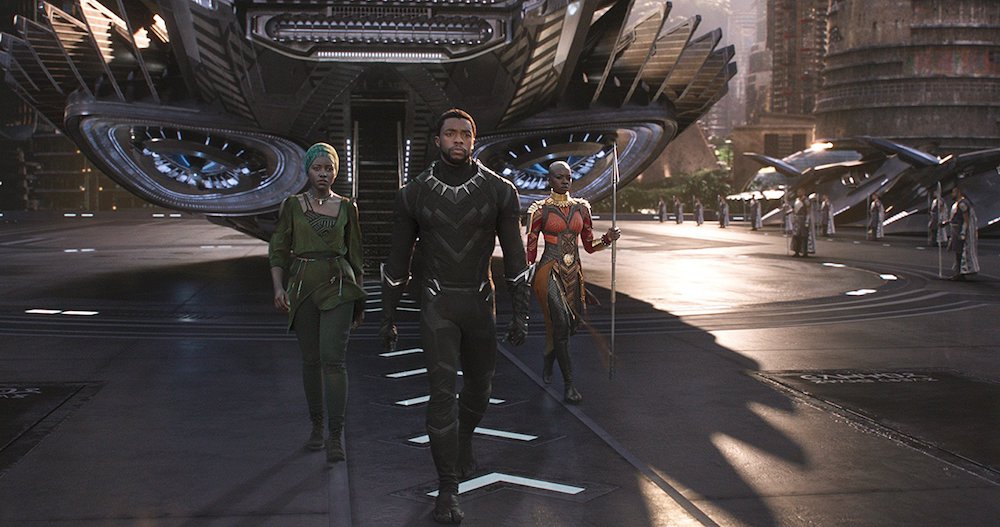 T’Challa is the ‘Black Panther’ of the title; newly crowned king of Wakanda following the death of his illustrious father, in echoes of The Lion King (1994), or Hamlet, after triumphing against a challenger from one of the country’s five tribes. There’s a lot about this movie that delights in showcasing Wakandan society, its many rituals, and long history (which began when an asteroid made of Vibraniam turned the landscape into a rich source for mining for its many uses).

Black Panther is a treat for the senses, with its luscious visuals and beautiful landscapes, but it’s the production design and costuming that excel at combining a high-tech vision of an African nation that maintains its heritage. Its people are identified by inner lip tattoos, some still choose to wear lip plates, female warriors like Okoye (Danai Gurira) always favour the trusty spear, and old-fashioned shields are raised that now project transparent force fields. Purely on the level of imagining Africa as being at the vanguard of science so incredible it looks extra-terrestrial, Black Panther is an intoxicating cultural spectacle. Wakanda is almost a parallel dimension to ours, and hopefully its “afrofuturism” will serve as an inspiration to many. That’s certainly where the story takes things. 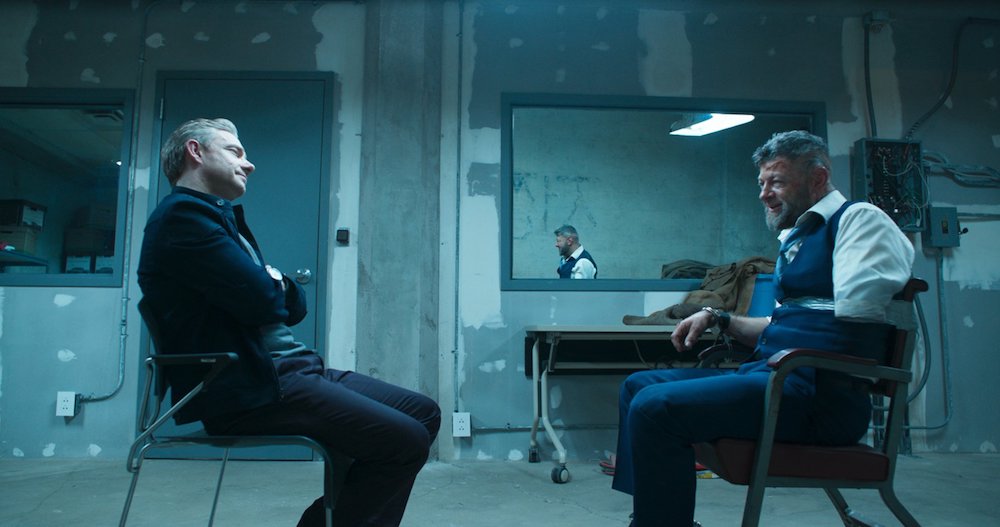 The core of the plot is quite a meat-and-potatoes affair for superhero movies that need to hit certain beats, but it disguises its comic-book formalism well. It’s essentially about a brash American pretender to the throne, Erik “Killmonger” Stevens (Michael B. Jordan), whose own history sours T’Challa’s perception of his own father and makes him doubt his own right to be king. Killmonger also has a strong opposing view of what a superpower like Wakanda should be doing with its resources, which doesn’t include convincing the world they’re an uninteresting dot on the map. Wakandan weapons and ubiquitous Vibranium metal, cheaply exported to every oppressed black person on the planet, could flip the ongoing race war on its head and give people of African descent the upper hand in society. Or maybe just switch the problem so that white people become the slaves to this advanced motherland.

In some ways Black Panther isn’t dissimilar to most other Marvel movies, but its artistic differences lend it a special atmosphere — performing much the same trick as Wonder Woman last year, but for ethnic minorities not females. The cast are an assortment of great black actors doing good work here, ranging from recognisable American veterans (Forest Whitaker, Angela Bassett), to rising British stars (Get Out’s Daniel Kaluuya, Black Mirror’s Letitia Wright), and established new stars like the aforementioned Jordan, Boseman, and Lupita Nyong’o as ‘War Dog’ Nakia. 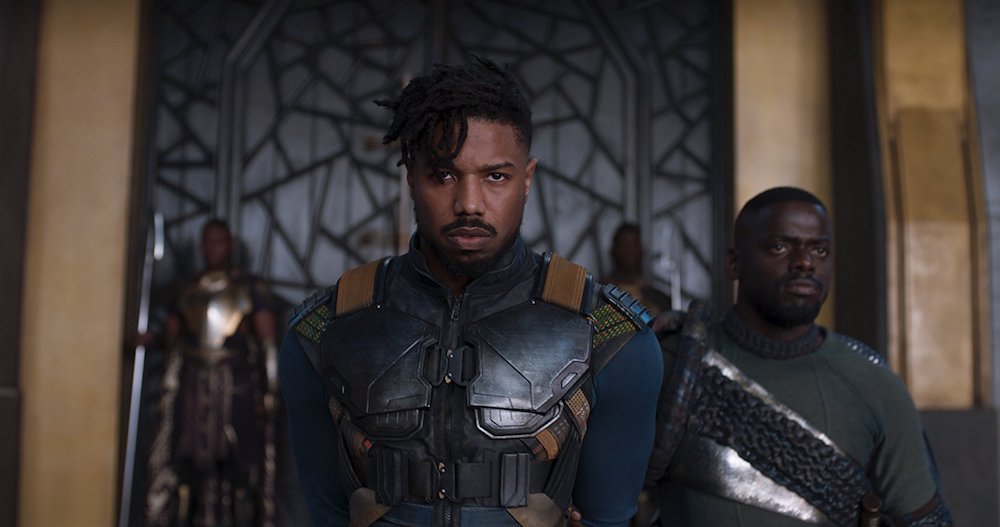 Boseman certainly has a lot of effortless charisma as the eponymous hero, being very honourable and graceful as a levelheaded leader who’s always fair and does the right thing. Meanwhile, Jordan does an excellent job shedding his nice guy image after Creed (2015), also directed by Ryan Coogler, to play a very arrogant and entitled young man who nevertheless has an understandable perspective and evokes our sympathy by the end. The audience I saw this with also responded well to Winston Duke as M’Baku, leader of a mountain tribe who worship the gorilla, who gets some of the best comedic moments and has a rivalrous arc with T’Challa that works effectively.

And if I think Black Panther’s a very good superhero movie, speaking as a middle class, middle-aged white man, then I’m sure black audiences are going to be reduced to tears seeing themselves reflected back in such a grand and positive way.

There are so many derogatory terms and stereotypes about African culture and the problems that continent has with corrupt governments and poverty, but Black Panther gives everything an ingenious twist by presenting a vision of “the future” Africa can aspire to. It’s admittedly a piece of imagination that won’t be coming true any time soon, created to entertain the masses, but it’s also an important cultural moment for a lot of people and director Ryan Coogler’s vision doesn’t disappoint.