“Gotta give the crowd what they want, baby,” a character says early on in Monsters: Dark Continent, as a group of gamblers crowd around an underground dog fight. What is it they want? “Blood.” Though the character’s referring to that disturbing fight that plays out in the first act of Tom Green’s follow-up to Monsters, he could be talking about the film itself. Between that and numerous scenes of war-time combat, this unflinching sequel is never short on the red stuff. Sadly, the gore only provides fleetingly diversion in a film that bravely sets itself apart from its predecessor, but can’t quite muster the same sense of wonder.

We open in the Middle East. It’s been a decade since the events of the first Monsters, when strange alien creatures started trampling the Earth, necessitating the quarantine of Mexico. The aliens aren’t the concern of Commanding Officer Noah Frater (Johnny Harris), though, who trains his sniper rifle on a Muslim man and doesn’t flinch when he takes him out—moments after the man’s hugged a child in the street. Meanwhile, in Detroit, soldier Michael Parkes (Sam Keely) prepares to join Frater in tackling dangerous insurgents. 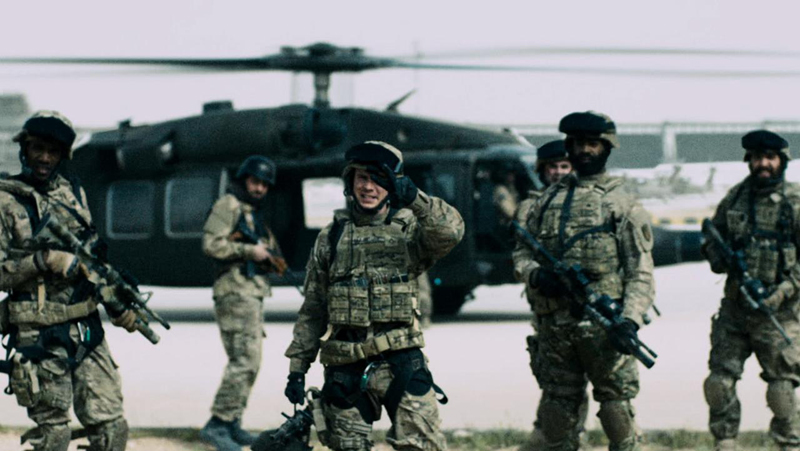 When Parkes and his comrades arrive in the Middle East, they become Team Tiger Shark and are told that their “main focus” should be taking down insurgents, though they’re also forced to contend with various ‘monsters’ that have taken over the landscape. We get our first proper glimpse of these ominous beasts as a helicopter flies over a dusty plain, where herds of elegant, shambling giants, half concealed in dust clouds, twist and gyrate majestically.

As with the first film, though, the focus is never really on the monsters. Whether they’re putting their giant eyes to the windows of decimated buildings or charging buffalo-style through the wilderness, they’re little more than extras in a film far more interested in capturing the horrors of war. Green’s inspirations are writ large in his film’s abusive commanding officers (“You’re a bunch of weird-ass, raggedy mother fuckers,” yells one sergeant) and shaky-cam depictions of battlefield action: clearly, this is meant to be Full Metal Jacket or The Hurt Locker with aliens.

That’s an interesting prospect, and the first half of the film is easily its best, when the novelty of aliens popping up during an otherwise gritty war story still feels strong. The clashing of genres affords the film an unusual texture, but it quickly becomes clear that the aliens will play little part in the film’s plot, rendering them almost entirely redundant. The concept of using them as a live backdrop for another story is a holdover from the first movie, but it doesn’t quite work second time around.

Where Edwards’ original was an unconventional love story that just happened to feature giant aliens, Green’s is another beast. His attempts to expose the triviality of war through the otherwise peaceful activity of these lumbering monstrosities feels obvious and laboured, not least when Parkes comes across a child in the desert who’s keeping a baby alien as a pet. That this happens moments after Frater has committed an unforgivable act only labours the point further, and the constant shots of serene alien herds interspersed with warring humans hammer the film’s message home with all the subtlety of a xenomorph birthing ceremony.

All that wouldn’t matter if Monsters: Dark Continent worked as a war movie. Unfortunately, it doesn’t. Its lead soldiers are only on their first tour, but their first mission—a search and rescue—ends disastrously thanks to their own ineptitude. They’re meant to be trained militants but they act like scared school kids. Meanwhile, Harris and Keely both deliver strong performances (as does Game Of Thrones’ Joe Dempsie as another soldier), but they’re hampered by a thin script that mostly just has them screaming at the sky. 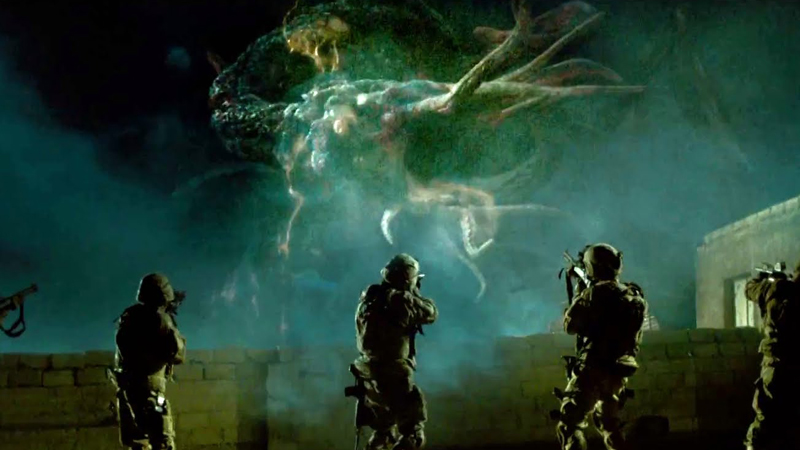 There’s no faulting the film’s style, though. Cinematographer Christopher Ross (Eden Lake, Black Sea) captures some startling images—heat-misted sunsets, those alien stampedes—and there’s a real urgency to the nightmarish combat scenes; slow mo, soundtracked by artillery fire, landlines popping with devastating efficiency, they’re a thing of mesmerising horror. Meanwhile, there are fun flourishes (such as the embroidered ‘Detroit’ insert), and the CGI is top quality, meaning we never doubt for a second that Parkes and co are really there with the aliens.

The first Monsters was famously crafted in the editing after Edwards shot over 100 hours of footage. Green’s sequel feels more planned and initially purposeful, but it runs out of ammo halfway through. That’s a shame, as the world itself is intriguing, presenting a mostly believable vision of what it might actually be like if we were forced to live alongside a strange new species. Though Monsters: Dark Continent boasts some memorable imagery, it ends up feeling like a wasted opportunity. Don’t expect Monsters 3 any time soon.