Banshee simply isn’t a show that could drag on for years and years. Its premise doesn’t really allow for it, and the show’s rapid pace wouldn’t either. It’s based around a flimsy web of deceit sustained by our nameless protagonist (Antony Starr) posing as the murdered sheriff Lucas Hood, and it’s a lie that just can’t go on forever without making a lot of the characters look like morons. The third season has been exceptionally exhilarating drama; the best season yet by some stretch. But, the revelation that the eight episodes of Season 4 will mark the show’s conclusion makes it even more exciting. It makes you realise that while this season’s been a storm of chaos, it can only lead to something crazier before the dust can settle.

Season 3 begins to show how organisations restructure after severe loss, with the members of the Banshee Sheriff’s Department starting the season exacting murderous revenge on one of the Nazis who killed their colleague Emmett and his wife in second season finale. The show starts to demonstrate how the rule-bending ways of Hood may be effective but how they also create a more dangerous environment now that they’re being adopted by the other cops like Brock (Matt Servitto) and Siobhan (Trieste Kelly Dunn).

Meanwhile, the death of crime lord Rabbit (Ben Cross) has left a hole for villains to fill this season—allowing Kai Proctor (Ulrich Thomsen) and his niece Rebecca (Lili Simmons) to get stronger stories, and for returning psycho Chayton Littlestone (Geno Segers) to become the season’s main antagonist. On another level, Hood’s always thinking about the next thing to steal, and the season explores how that urge can harm him and those around him. Here, he gets ex-lover Carrie (Ivana Miličević), hacker mastermind Job (Hoon Lee) and criminal turned barkeep Sugar (Frankie Faison) to help him rob untraceable cash from thieves in the army, inevitably creating a new enemy in Colonel Douglas Stowe (Langley Kirkwood). 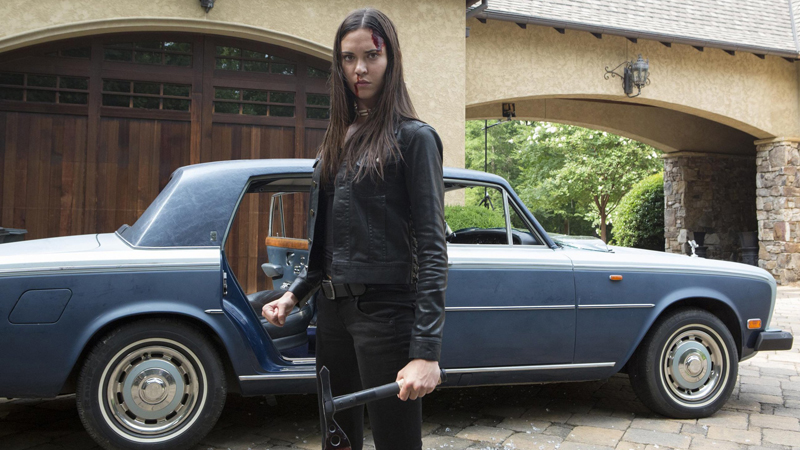 Banshee is a much praised show for telling its story at a shockingly fast pace, being absurdly violent, and having astoundingly well-choreographed action. But there’s more to the show than that. Look just below the surface and it’s clear it’s a drama with deep thematic concerns; primarily about the nature of identity and how difficult it is to be yourself around everybody else. Almost every main character on the show has some kind of dual identity, although none as pronounced as the protagonist. This is a man whose name we don’t even know because it’s hidden beneath layers and layers of disguises. How many other characters truly know anything about the man playacting as their sheriff? Hardly any, I’d guess.

The same applies for Sugar, pretending to be a barman when he’s really still a criminal. And it’s the case for Job, as he constantly evades revealing anything about who he really is. Or what about Carrie, who on some level is still pretending to be a wife and a mother, while trying to continue to be a criminal, and yet still be something other than Anastasia, daughter of a crime lord. If Banshee has anything to say about all this, it’s that it doesn’t work. You can’t maintain two identities on this show without serious harm coming to others, and you certainly can’t be both a cop and an outlaw simultaneously. It’s likely that the show will force its characters to choose
one path or another sooner or later.

Banshee also starts to explore loyalty and friendship very deeply this season, as it delivers a string of major deaths (one of which is just plain heartbreaking) as it progresses. These losses shake up the dynamic and test how far loyalty stretches. This is especially true between Hood and Job, as their relationship hasn’t been fully explored but is getting more focus as we move along. It’s difficult to know if the show itself is suggesting that loyalty is dangerous, or if it simply wants its characters to doubt their connections to each other before they will rely on those bonds most. A lot of the work setting this up has been done in this season, but the payoff might wait until the show’s return for its final run of episodes. 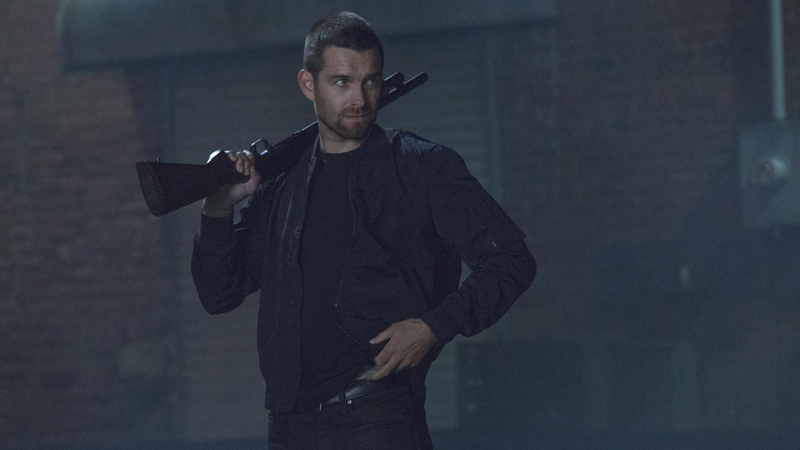 While Hood remains an enigma, one of Banshee‘s central themes is the past, and how it shapes the events of the present. We’re starting to see flashbacks that tell us more about the man Hood used to be; whether it’s the expert thief, the soldier tortured into compliance, or the boy desperate not to be his father. These little details help us understand him in the present, especially in terms of how he acts around Carrie and her daughter Deva (Ryann Shane), who relatively recently learned that he’s her biological father. Hood is a determined man who is used to being crazy enough and lucky enough to get himself and his friends out of any tricky situation, but the body count that’s been piling up should be teaching him that his methods aren’t working any longer.

Heartbreak is woven into the structure of the season, too. Back in the first year of the show, it seemed like every female character was sleeping with Hood without any establishing reasons why they would. Some of those early decisions still don’t necessarily make logical sense but, structurally, the numerous romantic ties means there’s a lot of connections to a lot of characters. It helps that the show devoted its most energy to the most convincing relationship (Hood and Siobhan), and that it then explored and deconstructed the varying levels of trust and closeness they shared. Slowly bringing Carrie and Gordon (Rus Blackwell) back together works really well too, as it strengthens them both as characters and shows why they work as a family. In most other shows, Gordon would be the idiot who never realised his wife was hiding something. But here he’s a conflicted and compelling character in his own right, as Banshee acknowledges that the two of them would have been drawn together by more than just convenience. 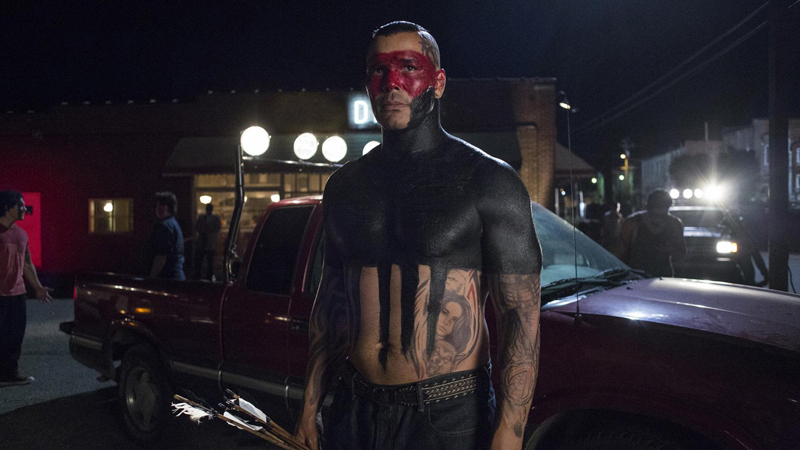 The conceptual foundations of Banshee are simple, because it cooks up conflict by throwing unpredictable people into established structures. We implicitly understand that there are rules to the way the cops work, and to how a criminal organisation works, or how the Amish community works, and how the local Kinaho tribe is run. Some of the constrictions have had to be explained along the way, but the basic idea is that there are rules within these groups and the show is about how people might come along and break the rules, but the structure itself will remain. Forcing real change upon these systems is what makes Banshee so violent, as it seems to suggest that humans find violent means to be their first answer to bringing change. This is true whether it’s Hood attempting to bring Proctor to justice, Chayton trying to establish himself as a leader, or Rebecca trying to prove her worth as a criminal. Ultimately, Banshee tells us, there’s going to be a fight no matter what.

And what a fight it’ll be. This show features simply some of the most unforgivingly brutal action choreography to ever appear on television. It’s relentless, exciting, and gorgeously conceived. The fight between Proctor’s bodyguard Burton (Matthew Rauch) and the vengeful Nola Longshadow (Odette Annable) is absolutely the action highlight of the season. It’s an incredible piece of hand-to-hand combat, but it’s still only in the third episode and there are many more scenes just like it peppered throughout the season. That insane fight scene may be the best of what Banshee has to offer, but this is a season with an outrageous two-man assault on a military base, a psychotic Native American tribe utterly destroying the police station (for an entire episode), and Hood’s ridiculous escape from a morbidly obese crime boss and his goons—in the back of a moving lorry! Never does an episode go by without some remarkable fight scene, and these are as impressive for being gripping as they are for being meticulously designed. 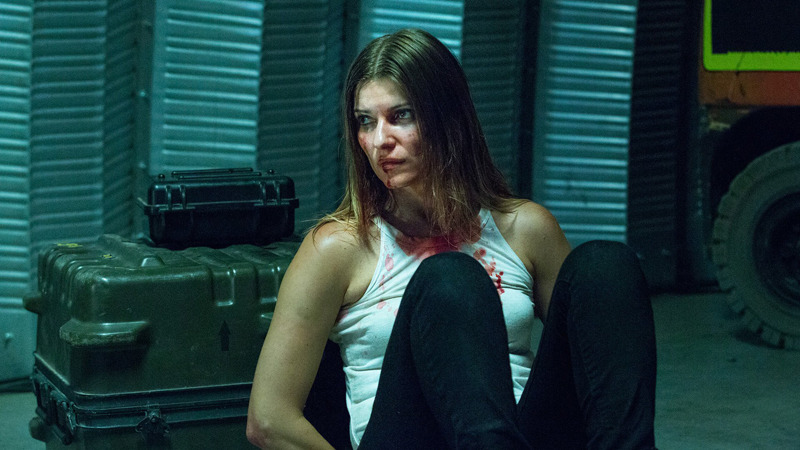 Banshee is a show that pays close attention to its villains, too, and this is something that makes for hugely worthwhile character development. With the plight of his dying mother, the show is able to move Proctor into a far more vulnerable position. When Rebecca oversteps and undermines his authority, the narrative then capitalises on his weakness by placing him in mortal danger only for his bloody revenge to make him a more formidable enemy in every possible way. This is a cold, ruthless man, and sometimes the most concerning thing is that he and Hood are not too different. The show’s commitment to building Proctor into a distinctive person in his own right, rather than just you average senseless criminal, is what will make the conclusion to his arc and his conflict with Hood all the more satisfying.

A lingering sense of doubt and an understanding that the past both haunts and shapes them is what unites almost all of Banshee‘s characters. These are all people trying to pass themselves off as somebody else, trying to exist within broken systems, and finding that they too often see violence as the only solution. This show might seem brutish and aggressive to outsiders, but there’s far more going on than you expect, and it’s never been as clear as it is here—in what’s been the show’s best and most consistently compelling season so far. The finale sets up a scenario in which characters are scattered and motivations muddled, but you can bet it’ll come back in a flurry of fists for season four. There is still work to be done and scores to be settled, and it’s guaranteed that nobody’s going to be sitting down for a friendly chat to solve these problems.

STAR TREK: DISCOVERY, 2.12 – ‘Through the Valley of Shadows’