While it’s hard to imagine an episode of Hannibal that could be called “restrained” (nor would I want to), adapting Red Dragon in six episodes has resulted in the show scaling back on its odd visual flourishes in favour of focusing on a surprisingly faithful adaptation of Thomas Harris’ tightly-plotted book. Showrunner Bryan Fuller and the show’s writers still seemingly have little interest in the procedural aspects common to similar shows; for instance, the complicated way that Dr. Lecter (Richard Armitage) delivers encoded messages to Francis Dolarhyde (Richard Armitage) in the book is sidestepped entirely. On the whole, though, this is the most plot-driven that the show has been since its first season, and while I happen to like Hannibal‘s more esoteric narrative digressions, “…  and the Beast From the Sea” proves the show can work brilliantly as a (relatively) straight thriller when it wants to. 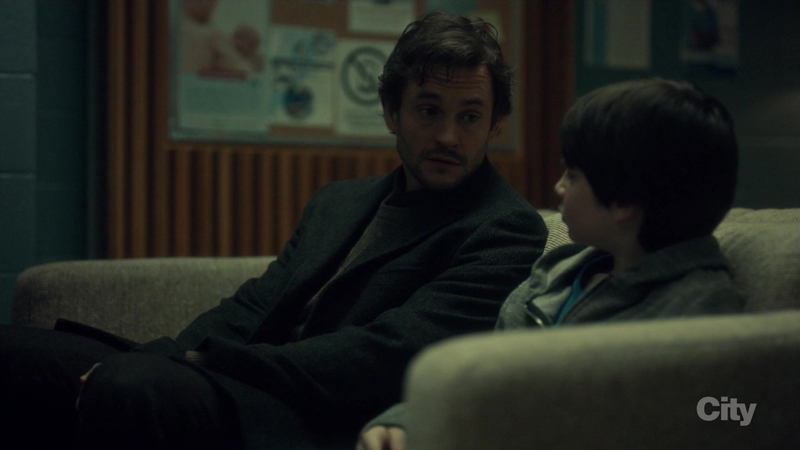 The episode’s high point was the long, almost unbearably tense sequence where Dolarhyde stalks Molly (Nina Arianda) and little Walter (Gabriel Browning Rodriguez) at their house. Director of photography James Hawkinson does some of his best work in the series here, with the entire sequence shrouded in near darkness, but with just enough detail visible for us to follow the action as Molly and Walter quietly made their escape from Dolarhyde (who, with his imposing frame and all-black outfit, reminded me of Everett McGill in The People Under the Stairs, of all things). As staged by episode director Michael Rymer, the sequence was a mini-masterpiece of precise staging and camera movement. I particularly loved the shot where the porch divided the screen into two separate planes of action, as Francis (falling for Molly’s car alarm diversion) exited right… while Molly and Walter, hiding directly beneath him, escaped in the other direction. 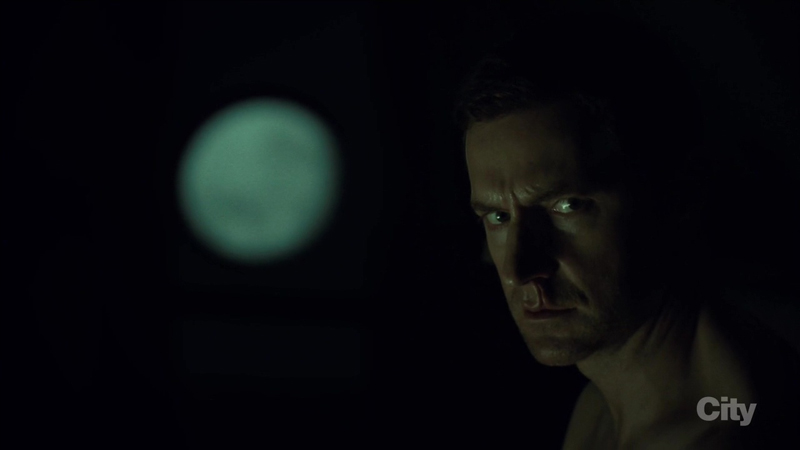 The sequence was also notable for how it deviated from the book in a way that strengthened one of its characters. In the book, the FBI decodes the message from Lecter to Dolarhyde containing Will (Hugh Dancy) and Molly’s address, so manage to get Molly and Walter to safety before he can visit them. Adding a confrontation not only allows for a great, suspenseful sequence, it’s also another opportunity to make Molly more than a passive character—the stock ‘worried wife waiting for her crime-solving husband to come home’—she is in the book. This Molly is not only smart and resourceful enough to outwit the Great Red Dragon, she’s also both reasonable and justifiably pissed off when Will visits her at the hospital later. She acknowledges her own role in encouraging Will to go back to work while also voicing her very reasonable anger at being a pawn in a game being played between her husband and his ex-murder husband. We’ve been given very little time to get to know Molly, who represents Will’s best chance at a normal, happy life, and thanks to the show’s writers, Arianda’s strong performancem and her chemistry with Dancy (the two co-starred in the Broadway production of Venus in Fur), Molly registers as more than an archetype.

Perhaps the biggest question hanging over these last few episodes is whether this kind of happiness will be possible for Will. This was mirrored in the scenes involving Francis, who, after failing to kill Will’s family, endures a beatdown from the dragon reminiscent of Fight Club (or Liar Liar, if  you prefer). Armitage has made for an amazing Dolarhyde, embodying both the monster (the scene where he speaks as the Dragon while talking to Lecter gave me literal chills) and the tortured man who wants nothing more than to rid himself of the beast within. The scene where he breaks up with Reba, afraid that he might hurt her (echoes of the “insect politics” scene from Cronenberg’s The Fly), was brilliantly performed by Armitage and Wesley, and the darkroom setting allowed for the effectively severe red and green lighting that at once separates the two characters and underlines the very real danger that Reba—who, heartbreakingly, can’t understand this—is in. 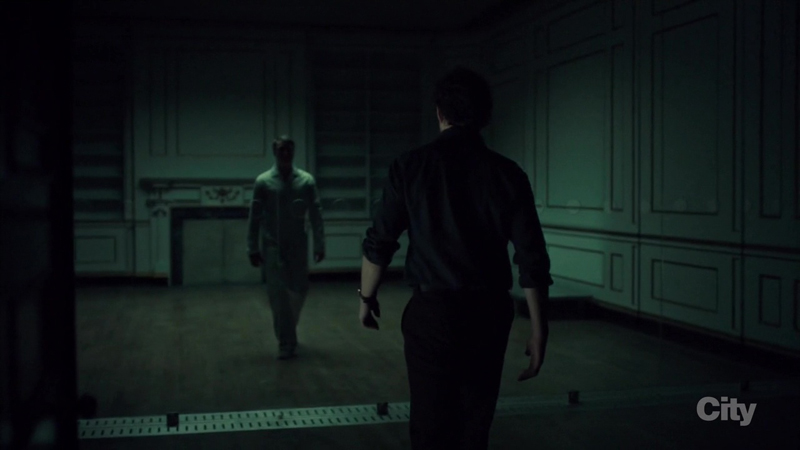 While Francis would rather push Reba away than hurt her, Hannibal is willing to let Will’s new family die to get closer to him. Frankly, ever since he surrendered himself rather than letting Will truly be rid of him, Hannibal has been acting like a dick. He’s the worst kind of ex; the kind who, once you finally shake them, only gets more attached to you as you move on. He’s willing to let Alana (Caroline Dhavernas) remove such minor niceties as a toilet from his cell rather than cooperate with Jack’s (Laurence Fishburne) investigation, because continuing to mess with poor Will’s head is that important to him. In the episode’s final scene, Will tells Hannibal that he’s sick of all these nuts and their nutty games, and good for him—nobody forced him to go to Hannibal for help, and maybe he’s finally realising that he doesn’t have to. On the other hand, the episode ends on a disquieting note, as Hannibal, referring to Dolarhyde’s attempts to “change” his victims, asks, “don’t you crave change, Will?”

In an adaptation that isn’t so faithful that it’s predictable, I’m dreading how Will might discover the answer to that question.