When a man pops his head out of a police box door and asks a duffle-coated Matt Lucas for an opinion on the set of antlers he’s sporting, you have a choice: a post-Christmas dinner snooze or prop your eyelids open with matchsticks to watch the Doctor Who Christmas special, “The Husbands of River Song”. While the TARDIS tries to cheer up The Doctor (Peter Capaldi) with said hologrammatic headgear, Steven Moffat invites you to sample this year’s recipe for his Christmas punch. Perhaps a little too heavy with the mulling spices this year, Steven.

It’s Christmas 5343 A.D on Mendorax Dellora. Yes, we have all the requisite ingredients of snow, trees, lights, and a Victorian street scene that looks uncannily like a redress of the hidden ‘trap street’ in “Face the Raven”. Due to a misunderstanding on Nardole’s part (Lucas’s talent for physical comedy is perfectly at home), The Doctor is prevailed upon to attend the dying King Hydroflax (Greg Davies) in his flying saucer. 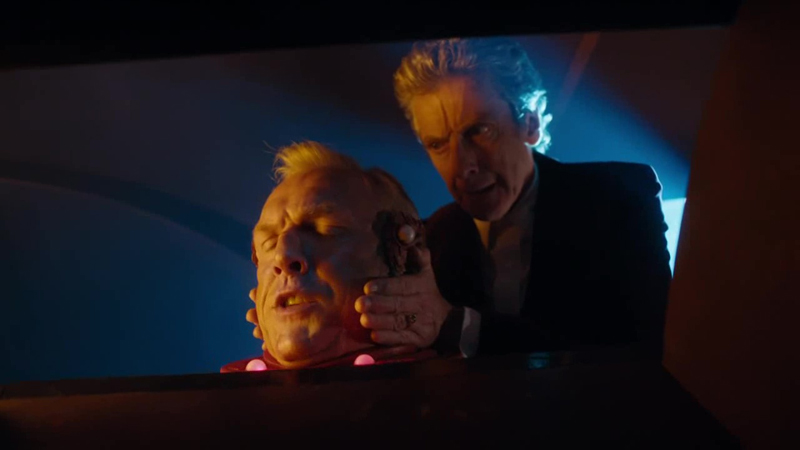 Hydroflax is the ‘husband’ of River Song (Alex Kingston)—but she is, naturally, only after his money in the form of a diamond currently worming its way into his brain. The Doctor, whom River doesn’t recognise, is required to remove her spouse’s head as the easiest option to acquire and sell the jewel. However, Hydroflax’s head and body are already mechanically independent of each other. His robot body traces Hydroflax’s diamond studded bonce to a starship crippled by meteors which takes River and The Doctor on their final date with fate to the planet Darillium.

With the presence of River Song, Moffat again engages in full-on screwball comedy mode; one that’s always suited The Doctor and Song pairings in the past. An uptight, rather grumpy Doctor is encouraged to come out of his shell, exchange some fast repartee and share absurd situations in a breezy Frank Capra and Howard Hawks homage. Variations of the ‘mad cap heiress on the run’ trope, a husband and wife tormenting each other (in both word and deed very similar to Irene Dunne and Cary Grant in The Awful Truth), and a social inequality (usually a rich versus poor) sub-text are all present and correct. 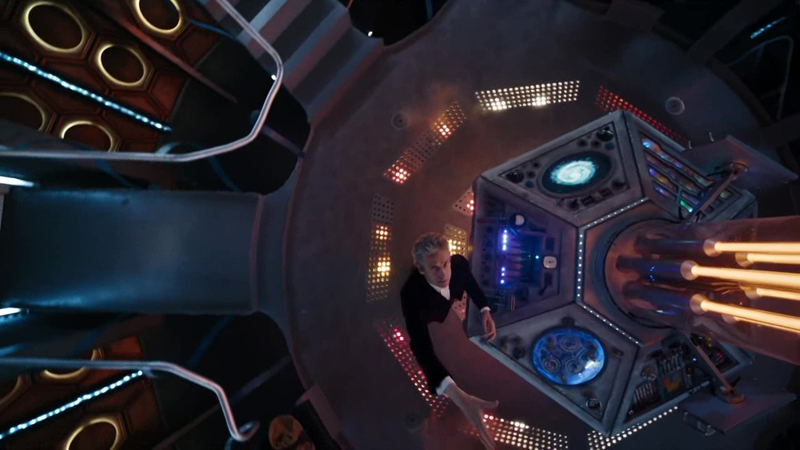 “The Husbands of River Song” attempts to counter slapstick with tenderness, as an absurd comic book crime caper and Hydroflax’s acquisition of new heads from the feckless Nardole and River’s other ‘husband’ Ramone (Philip Rhys), is balanced with The Doctor and River’s reunion. At a point when River doesn’t know what he looks like, we sense The Doctor’s increasing frustration and, dare we say it, jealously at the revelation River has other husbands and the impending bittersweet nature of their eventual reconciliation.

It starts off well with their encounter at the flying saucer, and there’s a sense of irony in The Doctor’s observation that “people usually need a flowchart” to even begin to understand the complexities of River Song’s timeline. And there’s the rub. The general audience will find the following fifty-five minutes a little baffling and self-indulgent—and yes, to misquote Roy Scheider, they’re going to need a bigger flow chart to make any sense out of it. 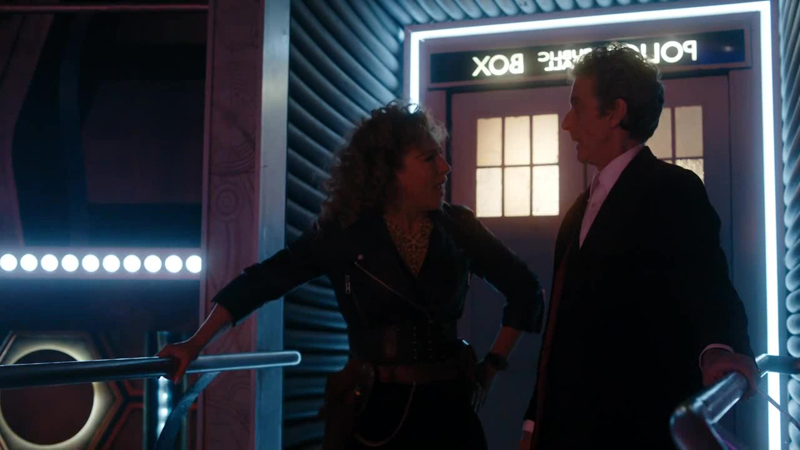 Moffat returns to 2011’s DVD mini-episode “Last Night” as the springboard of this story and its acknowledgement that The Doctor and River’s final date would be at the Singing Towers of Darillium. This is pure fan service and it’s not a detail the family audience, battling their way through indigestion and festive fatigue on Christmas Day, would care or even know about. However, it’s the destination this hour is primarily concerned with. Put aside the headless giant robots, the flying saucers, the diamond and the crashing spaceships, and you’ll at least find some fairy tale tenderness and romance tucked away.

There is some interesting symbolism in the story about male power and privilege. Hydroflax is the body politic rendered as a cyborg King that can wear any head, any crown to ensure the people stay in line. The Doctor cuts to the chase with a healthy dose of republicanism after he’s asked to bow to his Infinite Majesty, refusing “to carry the weight of an entirely pointless stratum of society who contribute nothing of worth to this world and crush the hopes and dreams of working people.” It’s an entirely justified modicum of political rhetoric after we learn from River, who has no conscience about killing the King, that Hydroflax is a master criminal and a butcher who eats his enemies, dead or alive. 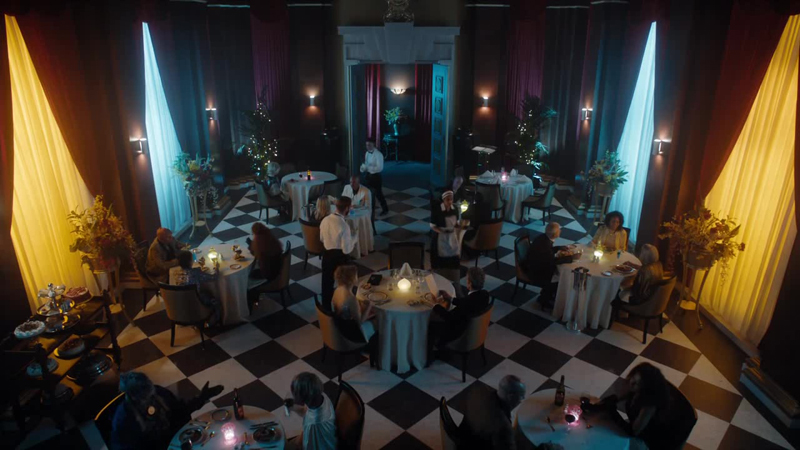 This is very much the River we first met, before her story became needlessly bogged down by her origins as Amy’s daughter and her destiny as The Doctor’s assassin during the Matt Smith era. There are both good and bad points to her as a devil-may-care adventurer, archaeologist and thief, because she’s also the femme fatale with the emasculating put downs, and a sense of masochism on Moffat’s part as he seems to enjoy having River putting The Doctor in his place. “Are you… thinking? Stop it, you’re a man, it looks weird,” she retorts as The Doctor formulates a plan. Plus ça change, so dust off your bingo card because Moffat can also not resist another nudge-nudge-wink-wink riff on gender fluidity as River declares she had a second wife.

But let’s not get encumbered with that. The important thing is the look on The Doctor’s face as River challenges Hydroflax when he threatens to hunt her down and kill her for her treachery. “You have an ancient artifact of great value to good people and whatever it takes I’m going to bring it home to them,” she insists as The Doctor recognises the qualities he admires in her being reflected back at him. Still, she hasn’t mentioned the part about selling the head to the highest bidder, yet. 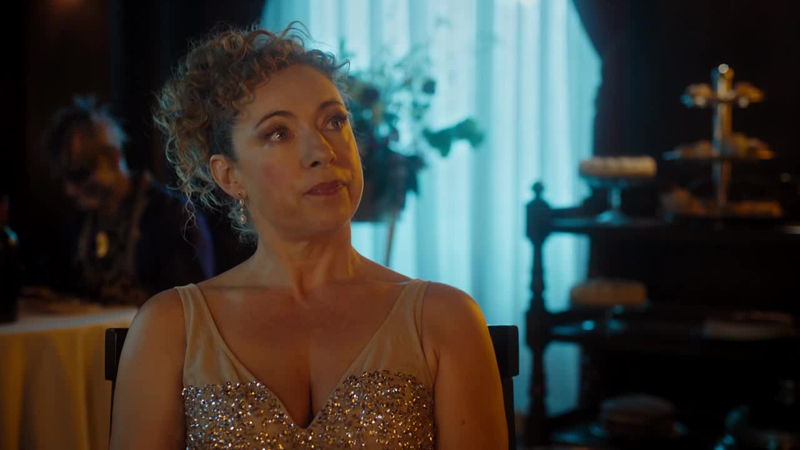 The best aspect of this is the playing by Kingston and Capaldi. River’s presence and the entire caper brings a lighter touch to Capaldi’s interpretation of The Doctor here. He shows the Time Lord cracking a smile or two and laughing heartily at the absurdity of the situation as he’s threatened by a head in a bag. When Ramone appears, it’s revealed the mission to kill Hydroflax was always to involve The Doctor. Yet, they’re searching for a man with only twelve faces and unaware that he’s sitting next to them wearing his thirteenth. With all the swapping of heads and questioning of identities, gradually this episode comes across as a Christmas panto version of Peckinpah’s Bring Me the Head of Alfredo Garcia.

There are also some neat reversals here, too. The shoe’s on the other foot for The Doctor as he gets to play, in a lovely little scene, the innocent companion to River Song feigning surprise at the trans-dimensional interior of the TARDIS. After all, he’s always wanted to see that bit done properly, and to cap it all he gets to explain the real time envelope safeguards that prevent the TARDIS from taking off when a head and its body are in two different dimensions. “You’re very quick,” notes River as The Doctor is once again frustrated by all the clues she refuses to pick up on about who he is. 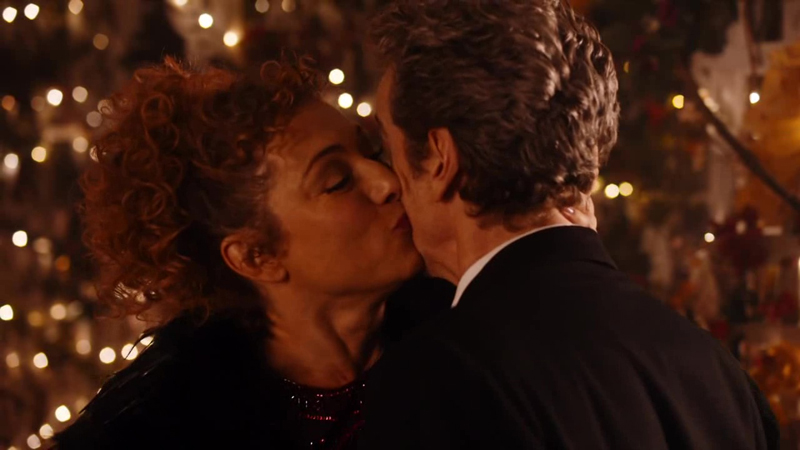 The interplay between the Twelfth Doctor and River Song is secured with some wonderful scenes. As they arrive on the cruise ship Harmony and Redemption, where “genocide comes to kick back and relax”, River intends to sell her ill-gotten gains to the criminally rich of the galaxy. Here, Moffat convinces us that River’s attitude to men and love is merely a means to end, a bit of spin. She wooed Hydroflax because men “believe any story they’re the hero of.” This brings us to River’s diary, an equally fantastic story about the Doctor we’ve seen unfolding since “Silence in the Library” and about to reach its climax. To paraphrase Oscar Wilde, “one should always have something sensational to read on a spaceship.”

This is the real driver of the story; one about endings, loss, and love. The story is nearly told, the diary is almost full, the Song almost sung. Fishing for compliments, The Doctor is merely told that the man who gave her the diary was “terribly useful now and then.” The Doctor is shocked to see himself as just a means to an end in River’s life but she’s spinning stories to save her skin. Later, when Hydroflax sets out to confirm if River knows of The Doctor’s whereabouts, she declares the “Doctor does not and has never loved me.” Again, Capaldi captures The Doctor’s bruised ego. 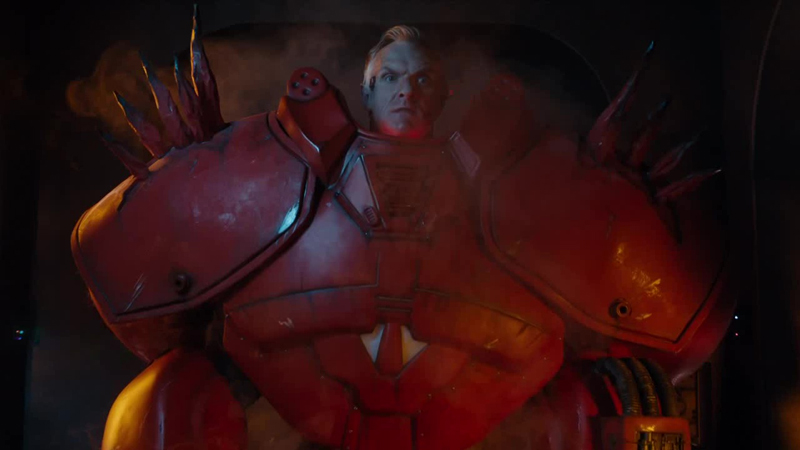 For River, The Doctor is not defined by the small business of falling in love with people and she claims she would never be useful as bait to rescue her as the damsel in distress. “You don’t expect a sunset to admire you back,” she declares, little knowing that said force of nature is looking straight at her in a full blown burst of sentimentality. Capaldi’s quiet greeting to her of “hello, sweetie” is another joyful moment of reversal in the story. It’s a gorgeous scene and it saves the episode from being a pretty but empty Christmas bauble.

The crime caper runs aground at this point, having rather outlived its usefulness, and the meteors striking the spaceship interrupt Hydroflax’s bid to wear The Doctor’s head. Using the meteors as a ‘get out of jail free card’ affords a great money shot as the floor of the dining room caves in and The Doctor and River plunge to their escape. The script bursts into life, the partnership finally pushes up a gear, and Capaldi and Kingston work well together as the screwball comedy roots are exposed to great effect in the flight deck argument about who married who, and which of them is any good at handling crashing spaceships. 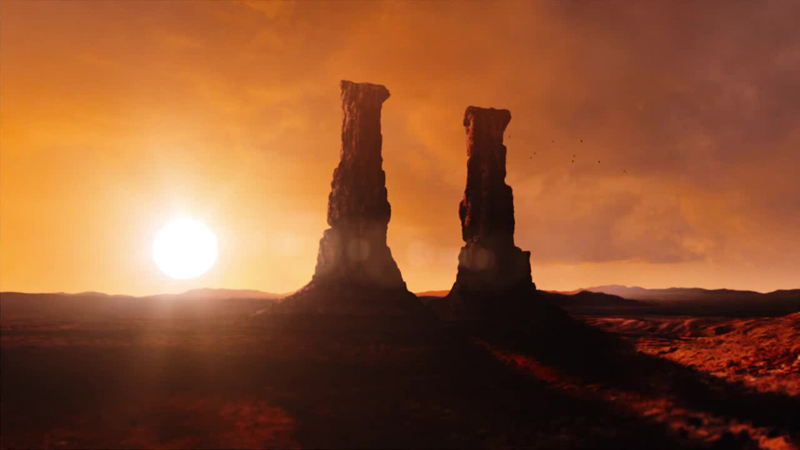 The return to Darillium forms the coda to the episode. The Doctor, it seems, has always been trying to postpone the dinner date at the Singing Towers because, of course, it means this is the end of River’s story. Yet, we all know River’s final end is in the Library, dying to save The Doctor but then preserved in the Library’s mainframe. Moffat is always reluctant to say goodbye to characters. He’d rather postpone the inevitable. He’s just done it with Clara and he does it again here with River.

The Doctor hands the diamond to a rescue worker (the rich versus poor sub-text again) and suggests he build a restaurant with the reward money. This is the restaurant The Doctor brings River to on Christmas Day in the future and where she is given a present of the sonic screwdriver she will use in the Library. Her diary is nearly full and, as predicted, she wonders if this is the last night they spend together but, in another moment of role reversal, the Doctor reminds her: “spoilers.” 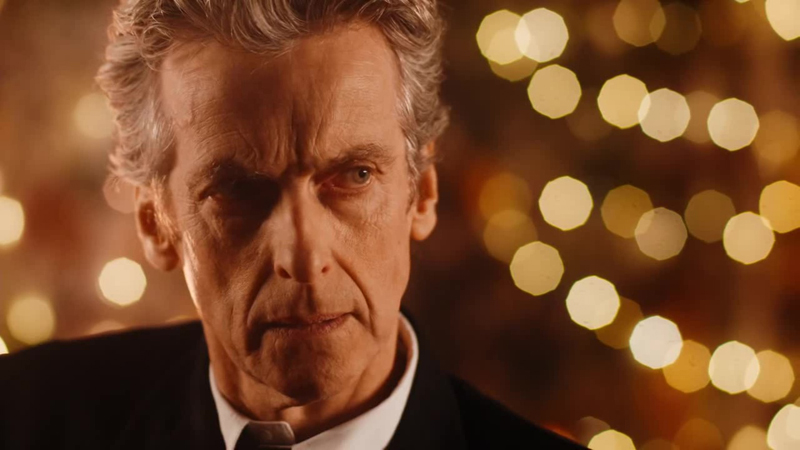 “Happy ever after doesn’t mean forever” as told in all the fairy tales and it is merely time deferred for a little while longer. Moffat, the sentimental old curmudgeon, now defers and gives her a little more time. After all, a Darillium night lasts twenty-four years and these two monoliths will keep on singing to each other. The wind through the towers is also apparently beautiful to listen to. Happily, it blows from each end of The Doctor and River’s timelines.

The final 10-minutes are narratively and emotionally what everything else is constructed around in “The Husbands of River Song”, and even if you snoozed through the episode and woke up at this point with an impending hangover… it’s really all you needed to see and understand. The rest is of less consequence and is simply a means to an end.