Well, excuse me while I get my breath back because that was quite an episode of You, Me & The Apocalypse! Everything kicked off this week as the revelations fell thick and fast. Fathers revealed themselves, grandmothers were unveiled, and there were strange hints at hidden links between many of our supposedly disparate bunch. In fact, if one thing is becoming increasingly clear it’s that this is a family affair—and that the family in question has more than a few issues to work through… 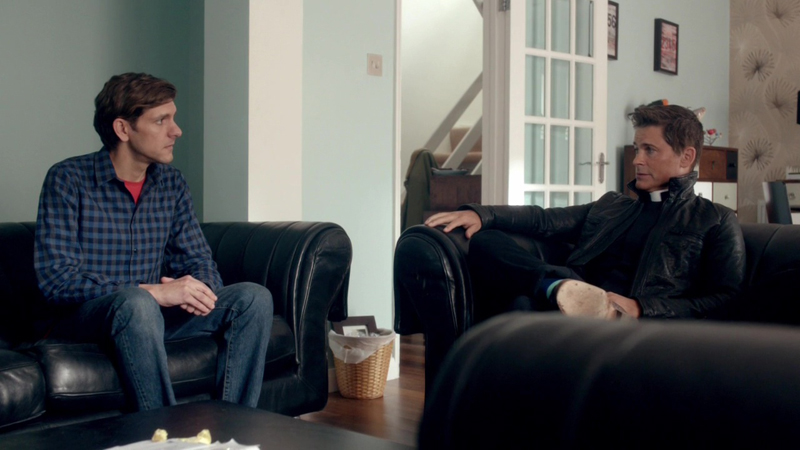 The first major shock of the episode was that Father Jude (Rob Lowe) is actually Jamie (Mathew Baynton) and Ariel’s long-lost father; twins who were product of a fling he had with Mary as a wild 18-year-old who’d just been kicked out of school. (Is it only me who immediately thought this sounded like an excellent dropped plot strand from Rob Lowe’s ’80s prep school comedy Class?)

Unfortunately for Jude, who hotfooted it to England after Mary’s untimely death (squashed by falling bricks while preaching Jamie’s the Son of God) turned her into an internet sensation, Jamie wasn’t very impressed by his father’s reappearance, telling the good father that he’d “ruined Mary’s life” before storming off to take part in a dangerous medical test as a way of finding new meaning in life. As you do. In truth, Jamie’s reaction was pretty understandable given this hasn’t been the best time for him, as his summation to the Doctor at Nocturnapram illustrated: so I found out my mum had lied to me for 30-years, my other mum abandoned me in a car park but kept my twin, my wife was actually already married to my brother and left me anyway. Oh, and my dad’s a roguish Vatican priest, although at least back then the priest part hadn’t happened. Poor Jamie, I feel for him. How many more shocks can one man take? 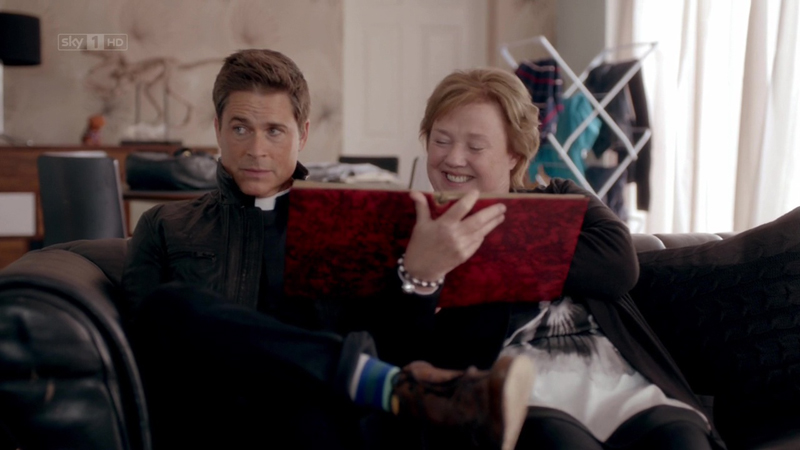 The answer to that question as it turned out was well, at least one more, because Sister Celine (Gaia Scodellaro) finally revealed the picture given to her by ‘Giraffe Girl’ (although not the fact that, like her maternal grandmother and uncle, she hears voices), and let Jamie know he has a daughter. This revelation at least seemed to give our hero new hope as he set off to find her—oh Jamie, why do I have the horrible feeling that this could still end in tears, impending apocalypse notwithstanding? 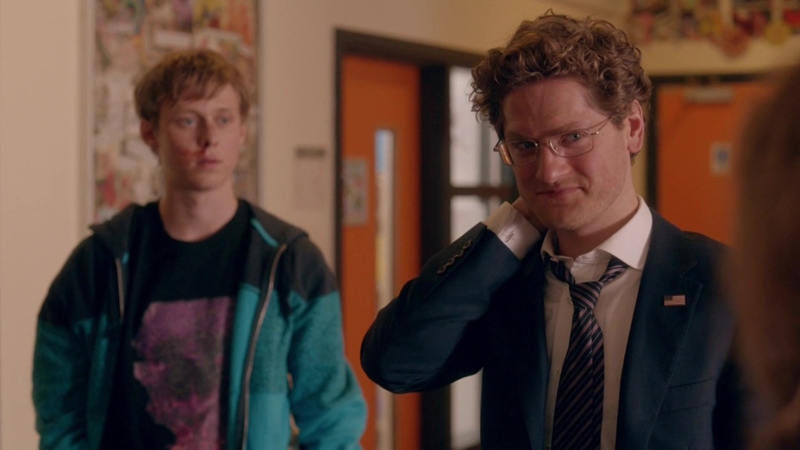 It was a real week for reunions as Rhonda (Jenna Fischer), after scavenging in bins and breaking into her own home, finally met up with Spike (Fabian McCallum). The scenes between the two were genuinely touching, as was the exploration of the bond between Rhonda and Scotty (Kyle Soller), who came through for his twin sister in the end. Sadly for our man in the Pentagon, that decision was at great cost to his personal life, as Gaines (I know he’s ‘Arnie’ to Scotty but somehow he’ll always be Gaines to me) sorrowfully pulled the plug on their relationship with the words: “I love you too. But right now who cares—this is bigger than us.” Oh Gaines, sometimes a man’s just gotta do what a man’s gotta do and it’s true the President is a sex-crazed idiot who might well undermine the future of mankind but the look on Scotty’s face was still heart breaking. 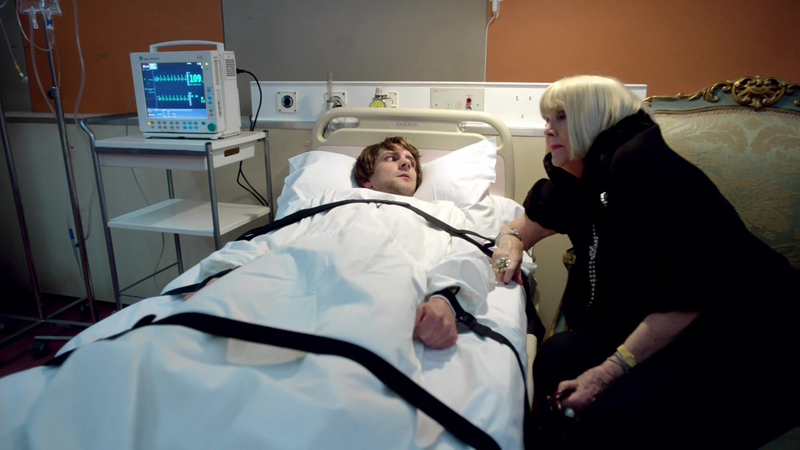 We also learnt a great deal more about the mysterious Sutton (Diana Rigg) as she held Ariel captive, tested his blood claiming if it was good she’d be using it to ‘stay alive’ and nonchalantly revealed she’s his grandmother. That’s right, she’s the mother of Father Jude (this wasn’t made absolutely clear so it’s possible she’s Mary’s mum, but Jude seemed more likely given her American accent and the way she talked about his beauty and regret that he joined the priesthood). But wait, because the revelations didn’t stop there, as Sutton revealed that her agents had only found Ariel because they were trailing his “Uncle Scotty”. Wait, everyone back up a minute. Scotty is Ariel’s uncle, which means Rhonda is his aunt and also Jude is their older brother… wow this is getting complicated people.

I’m not entirely sure that Scotty and Rhonda know about Jude, given their conversation about only having each other. It’s also possible that they’re the children of a second later marriage. All we do know is that Jude’s father killed himself when he was a teenager, Sutton says she was a terrible and entirely non-maternal mother, and Scotty and Rhonda had a hard upbringing that led Rhonda to an early disastrous relationship with Spike’s father. Oh, and everyone thinks Sutton’s dead “because of a legal issue in the Eighties”. As to why she needs all the blood—your guess is as good as mine. I’m pretty sure she’s not actually a vampire, well only in the more mundane, human sense of preying on people and using them to her own ends. (Poor Doctor Samuel, he looked terrified as she lasciviously advanced on him.) So why the blood transfusions? Are we looking at some kind of rare disease? 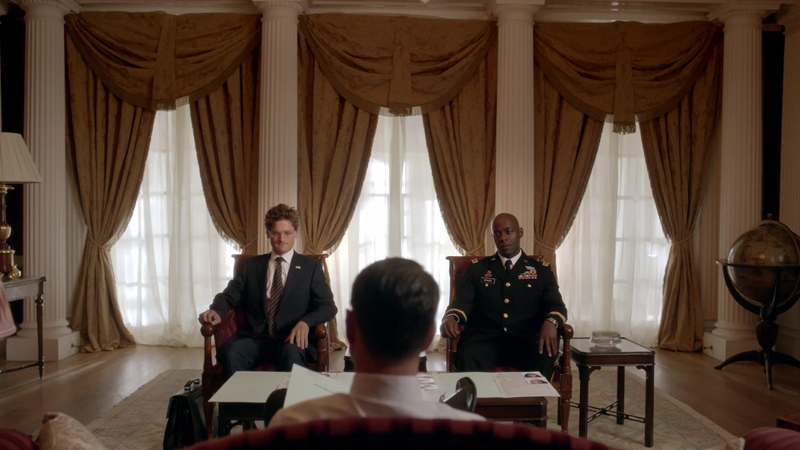 So what did you think? What’s Sutton’s masterplan? Can Jamie find his daughter and happiness before Ariel nabs her for Sutton? And what about Dave—will that bucket list ever get ticked off? As ever, all speculation welcome below…