It’s not an accident I haven’t written much about Liz Taylor (Denis O’Hare), the barkeep at the Hotel Cortez, so far in my reviews of American Horror Story: Hotel. The show has mostly kept Liz on the periphery of its many storylines, and I’ve been dreading what the show might have in store for a transgender character. While creators Ryan Murphy and Brad Falchuk are nothing if not LGBT-friendly, the show’s first major inclusion of the “T” part of the acronym was a dicey proposition. Trans characters are underrepresented even in otherwise queer-friendly shows, and even shows that focus on or include trans characters with the best of intentions often end up leaving trans viewers feeling patronised or exploited for the sake of simplistic, uplifting narratives. And given Murphy and Falchuk’s general disdain for subtlety and shotgun blast approach to topical subject matter—not to mention the character’s cringe-inducing on-the-nose name—I’d braced myself for the worst. 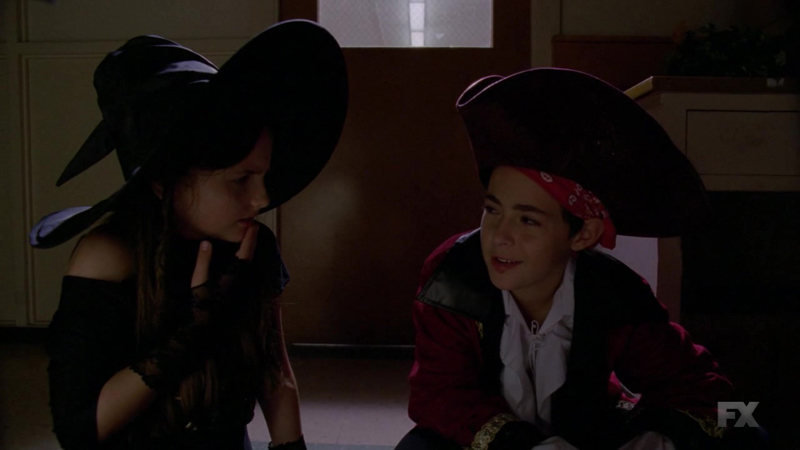 Thankfully, the sequence where we see how Liz came to work for the Countess (Lady Gaga) is one of the season’s highlights so far. The show flashes back to 1984, as Liz—then a closeted businessman with a wife and son—is staying at the Cortez while on a business trip, secretly enjoying wearing a slip and a fur in the safety of her room. She’s visited by the Countess, who tells her that, while he looks like a man on the outside, his blood smells like a woman. The subsequent sequence is the episode’s best, and not just because it gives the show a chance to use “Bette Davis Eyes” on the soundtrack. As the Countess makes Liz over and bestows her new name (“like Liz Taylor in Butterfield 8“), it’s a disarmingly earnest sequence that wouldn’t be out of place on a non-genre show. That it ends with the Countess offing Liz’s homophobic co-workers is no matter—the show’s always best when it’s celebrating outsiders, and Gaga’s offscreen persona as a self-appointed “Mother Monster” of her largely LGBT fan base dovetails beautifully with her role as a monster who offers Liz and others the promise of transformation. While her performance has been fascinating to watch so far, “Room Service” gives her character a bit of much-needed nuance. 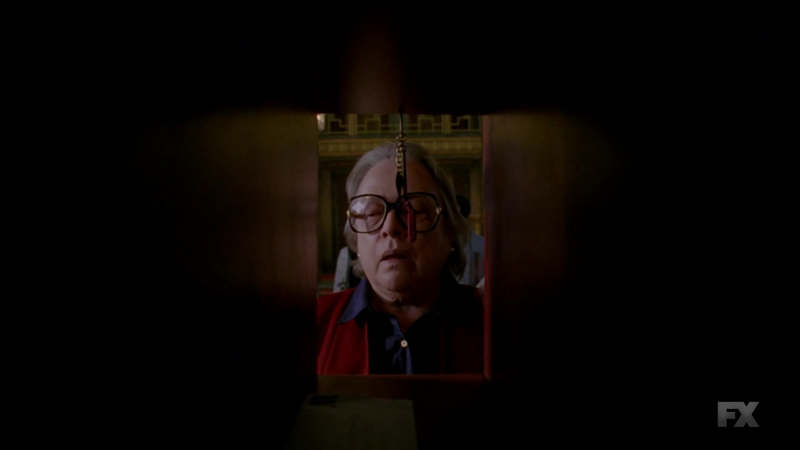 Transformation is the episode’s explicit theme, as Liz—who was never turned into a “vampire” by the Countess—is relating this story to Iris (Kathy Bates), who’s just been turned by her own son. Bates was sorely missed in last week’s episode, and her character’s progression in this hour also brings the season some much-needed emotional depth. Lamenting the fact that she’s bound to spend eternity in the body of an old woman who people see through, Iris is inspired by Liz’s example to stop being a doormat and start living. That she does so by murdering a pair of stock hipster characters (Darren Criss and Jessica Lu)—who, incidentally, embody just about every stereotype about millennials in their brief screen time—makes this play like a bloodier version of Bates’ character arc in Fried Green Tomatoes. It’s fun to see Bates play murderous again, especially in such a perversely sympathetic role, and I hope the show won’t forget about Iris and Liz’s budding friendship, as it’s a pleasure to watch Bates and O’Hare play off each other. 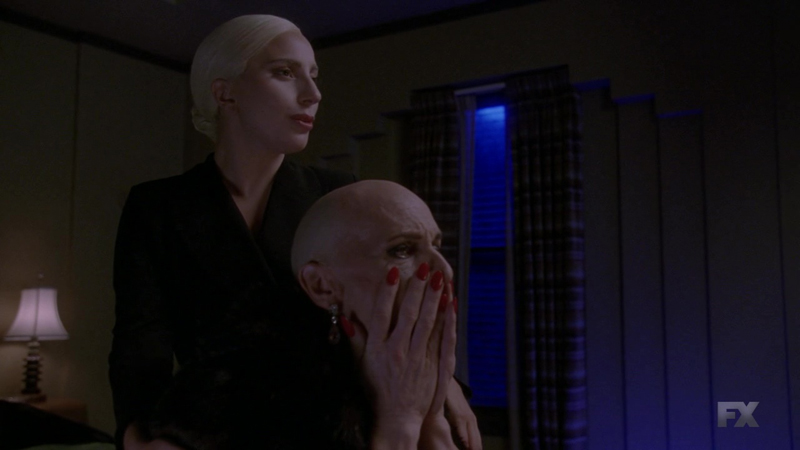 Transformation takes a darker turn with Alex (Chloë Sevigny), who, after being turned by the Countess last week, decides to save her young, pneumonia-stricken patient Max (Anton Lee Starkman), by feeding her blood into his IV drip. Max makes a speedy recovery, then murders his parents the next morning (it was nice while it lasted, Mädchen Amick—see you at the Double R Diner?) before hopping on the school bus, turning his classmates, and massacring his school’s teachers and staff. It’s a sequence that probably read better than it plays, starting as an amusing sick joke that recalls The Brood and Children of the Corn before clumsily invoking the imagery of real-life school shootings (still, as bad taste on AHS goes, it’s a lot less disconcerting than last week’s serial killer party). The episode ends with Alex reunited with Holden (Lennon Henry), having agreed to serve as his and all of the non-vampire kids’ governess. Alex and Holden settle down for a rest in a tastefully designed glass coffin, in a more-than-vaguely Oedipal tableaux. Eww.

Hotel is proving overstuffed even by American Horror Story’s standards, and the season’s other plotlines are mostly or, in the case of James March (Evan Peters), entirely sidelined this week (no fake old time-y dialogue here, sadly). I guess I should report that John (Wes Bentley) loses his job and sleeps with Sally (Sarah Paulson), but that’s really all there is to say about that. Even so, it’s a big step up from last week’s misfire—as written by Ned Martel and directed by the show’s cinematographer, Michael Goi, it’s as close to thematically and aesthetically coherent as this show will perhaps ever be. That sounds like a backhanded compliment, but it’s not—I want this show to be reckless, as long as it has an emotional core that, at its best, blindsides us with moments of insight and emotional resonance. Less serial killer parties and more Liz and Iris parties, please.