Never one to shy away from making political points, when Spike Lee has something to say, he says it loud and proud. Lee’s previous movies Do The Right Thing (1989) and Malcolm X (1992) focused on the experiences of black people in America, and the inequality and hatred surrounding them. Now, fuelled by righteous anger but evenly balanced with satire, the returns to tackle the horrific white supremacist groups across the US with an adaptation of Ron Stallworth’s memoirs.

Based on true events, BlacKkKlansman is a well-crafted dramatisation that affords Lee the opportunity to approach the rise of racism in the age of Trump. In addition to being written and directed by Lee, BlacKkKlansman was produced by collaborators Jason Blum and Jordan Peele, who were behind the Oscar-winning Get Out (2017). Addressing the real horrors of racial prejudice, Lee examines the sickening reality of what white supremacist groups represent, and makes it painfully clear the past continues to resonate today. 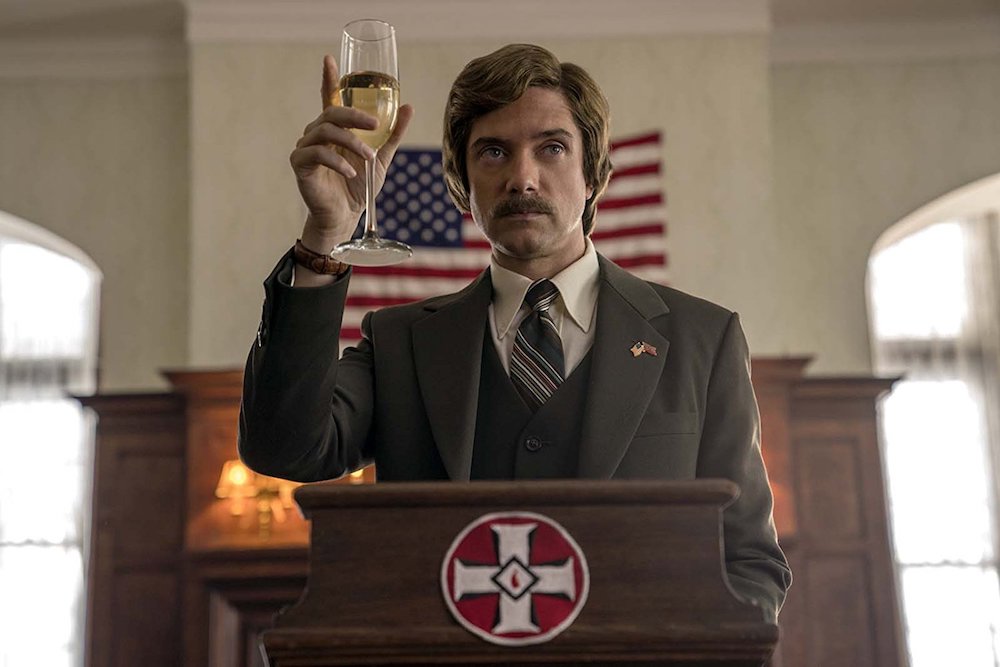 Set in the 1970s, Ron Stallworth (John David Washington) is Colorado Springs’ first black police officer. With aspirations of becoming a detective, Ron’s assigned the mundane task of filling the departments records until he agrees to go undercover. Whilst on his first assignment to observe a speech by civil rights activist Stokely Carmichael (Corey Hawkins), Ron befriends a member of the black student union, Patrice Dumas (Laura Harrier). Later, police chief Bridges (Robert John Burke) promotes Ron for his efforts and he’s then assigned to the department’s intelligence section. And after reads the city newspaper, Ron stumbles upon a recruitment ad for the local chapter of the Ku Klux Klan and calls them in response, setting in motion an ingenious scheme. With the help of his white Jewish partner Flip Zimmerman (Adam Driver), handling the meetings with the KKK’s Imperial Wizard David Duke (Topher Grace) while Ron deals with the phone calls, the two slowly infiltrate the organisation. However, can Ron and Flip keep the charade going long enough for them to stop the Klan’s plan to terrorise Colorado Springs with their acts of racially-motivated violence?

Stepping out from behind his dad Denzel’s shadow, John David Washington (HBO’s Ballers) has the same charisma and star quality of his famous father. He’s cool, funny, and charismatic as Ron, always keeping his anger in check as he goes about a very dangerous operation. There’s a solid chemistry between him and the actors around him that makes his character engaging and interesting to follow. 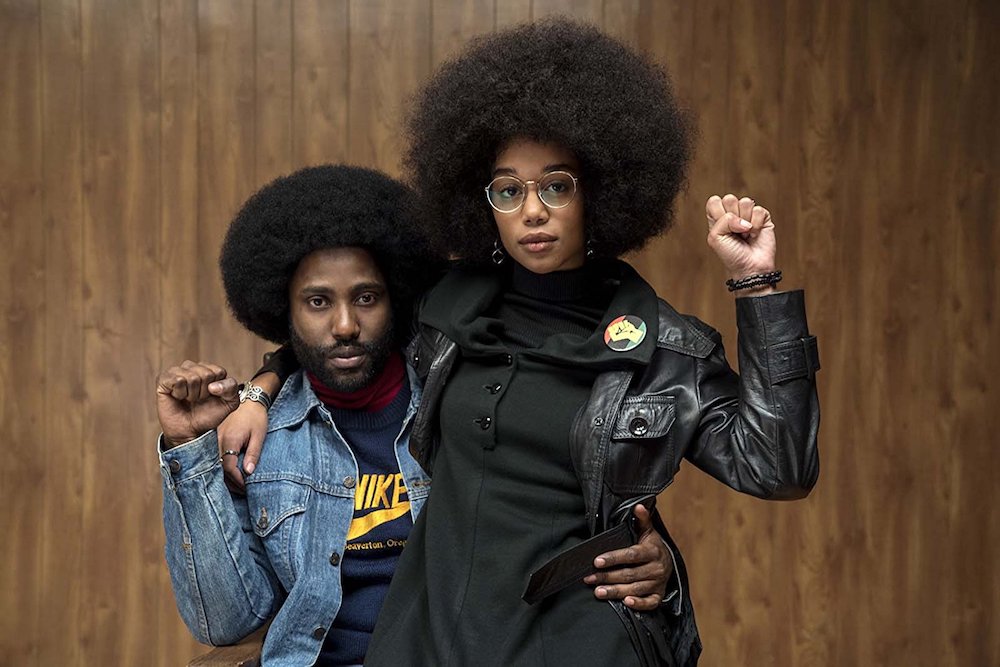 In a standout performance Adam Driver (Star Wars: The Last Jedi) manages to subtly convey his own anger and disgust as Ron’s partner, Flip. Although he can’t let his KKK associates see through the facade, the audience can see the transformation he’s going through beneath the surface. His journey from an unobservant Jew to someone who understands the danger the Klan represent is the most compelling arc in the movie. Every scene he’s with the Klan creates more tension than the last, as he’s only one mistake away from being exposed.

The KKK characters are portrayed as caricatures that fall in to familiar character tropes. Jasper Paakkonen (Vikings) as the paranoid ‘mad dog’, and Paul Waiter Hauser (I, Tonya) as the bumbling fool. However, Topher Grace (That 70’s Show) turns in a great yet haunting performance as real life white supremacist David Duke. It’s a great piece of casting and Grace plays the character to slimy perfection as a delusional fantasist. 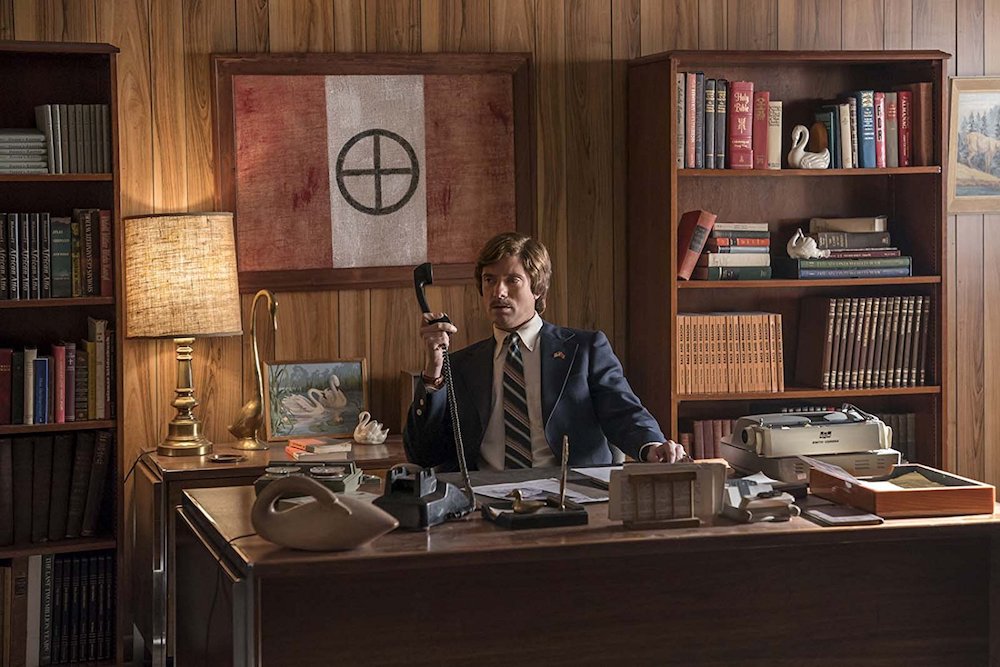 Fans of Spike Lee’s profuse career will be happy his auteur flair is evident in BlacKkKlansman, a movie larger in scope and mainstream appeal than the majority of his projects. His thumbprint is noticeable throughout: the harsh lighting, skewered close-ups, and a familiar dolly shot as Ron and Patricia walk down a corridor. Aesthetically, he utilises the style of both blaxploitation cinema and ’70s crime thriller to frame this story. The movie is gorgeous and very stylish as a period piece, full of rich colours thanks to the set design’s shades of browns and oranges, and funky costume design with large-collard shirts and bellbottomed trousers borrowed from John Travolta in Saturday Night Fever (1977).

Lee adds other stylistic flourishes such as a split-screen shots during telephone calls, and the smooth jazz score by Terrance Blanchard, as a way of paying homage to the era. The work of cinematographer Chayse Irvin (Beyonce’s music video Lemonade) is shot on 35mm for the majority of the two-hour runtime. The vivid grain on the film help invoke the period the story is set and looks like the distant cousin of Gordon Parks’ Shaft (1971). Lee does a great job at paying tribute to ’70s blaxploitation movies, while ensuring the audience know that BlacKkKlansman is a Spike Lee Joint with his own finesse. 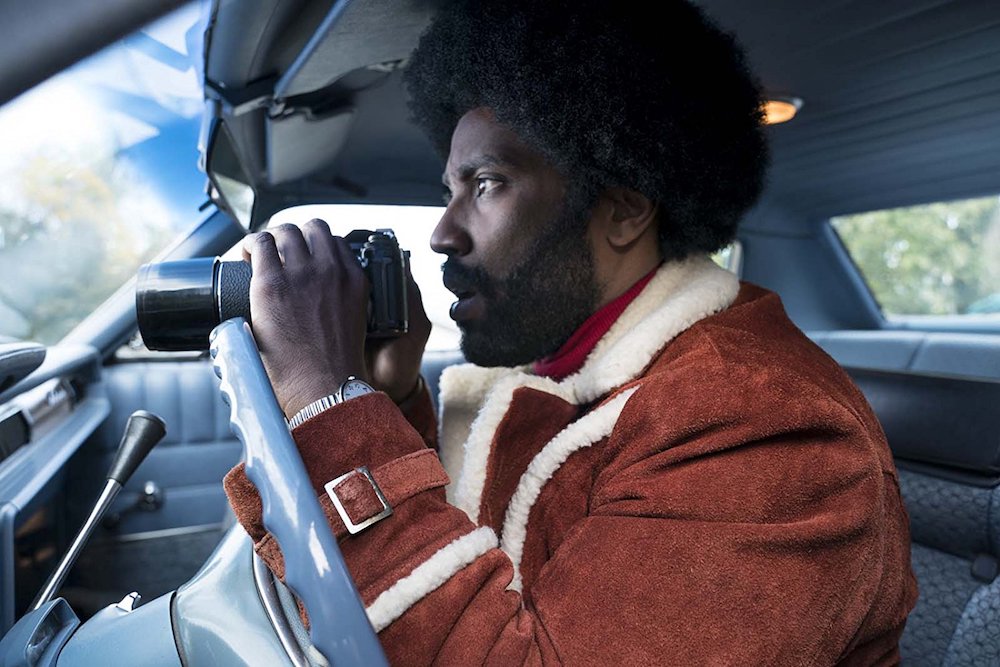 There’s a lot for one movie to take on about America’s complicated racial history, and BlacKkKlansman unfortunately suffers with certain elements as it attempts to cover so much ground. Some of the plot threads end up feeling undercooked and messy, especially the love affair between Ron and Patricia. Their relationship is under-utilised and often feels like it’s been added to create an unnecessary love interest subplot.

Along with this, several of Lee’s stylistic choices are questionable. Granted a movie set in the ’70s should contain music from that era, but during several scenes the music feels mismatched and doesn’t help create the tension the scene requires. It’s not enough to draw you out of the story, but it’s enough to loosen the grip you have on the edge of your armrest. These are, however, only small gripes and won’t prevent the important social message the director is expressing.

BlacKkKlansman is not only one of Spike Lee’s best movies, it’s an important and necessary piece of filmmaking. Much like Do The Right Thing (1989) and Bamboozled (2000), it packs weighty and relevant subject matter into a medium that makes the viewer laugh one moment and feel uncomfortable the next. It works brilliantly as an entertaining, dark comedy, with a seemingly ludicrous story that’s perfect for the big screen. Yet it works as a clever reflection of the inequality and deeply embedded racism in contemporary America. BlacKkKlansman is undoubtedly one of the most powerful films you’ll see this year.