How amusing that DC Films are finding their mojo with characters they’d kept on the sidelines because it didn’t seem easy to turn Wonder Woman, Aquaman, and now Shazam into superheroes with the same broad appeal as warhorses Superman and Batman. A statuesque woman with a stars-and-stripes costume and an invisible jet? A guy in tight green trousers who talks to fish? How could audiences take them seriously post-Batman Begins (2005)? But while Man of Steel (2013) and Batman vs Superman: Dawn of Justice (2016) floundered creatively, it’s been those the characters with more specific demographic appeal and fresh ideas that have soared. Wonder Woman (2017) spoke to young girls hungry for a headlining superhero to relate to, Aquaman (2018) made its hero mixed race and showcased breathtaking underwater vistas, and now Shazam! targets children and their wish-fulfilment fantasies the current vogue for superheroes has only deepened. Oh, and it’s also light and frothy fun, as DC Films free themselves of Zack Snyder’s morose vision.

Created by Bill Parker and C.C Beck for Fawcett Comics, Shazam started life as “Captain Marvel” in 1939 until a copyright infringement suit over his similarity to Superman ended publication in 1953. In 1972, the rights were ironically sold to DC Comics themselves, who rebranded him “Shazam” because Marvel Comics had since trademarked the Captain Marvel name for one of their own superheroes—who coincidentally got her own film this year, too. There were serious attempts to get Shazam made in the early-2000s after Spider-Man (2002) became a hit, and one even got into pre-production until Speed Racer (2008) flopped and Warner Bros. stupidly reconsidered Shazam!’s effervescent tone, aiming to make it darker and more serious-minded. In 2014, Dwayne Johnson (Jumanji: Welcome to the Jungle) confirmed his interest in playing either Shazam or his archenemy Black Adam, which reignited interest in the property and led to Shazam! becoming part of the DC Extended Universe (DCEU). Johnson is still an executive producer on Shazam!, and set to play supervillain Black Adam in a solo movie. 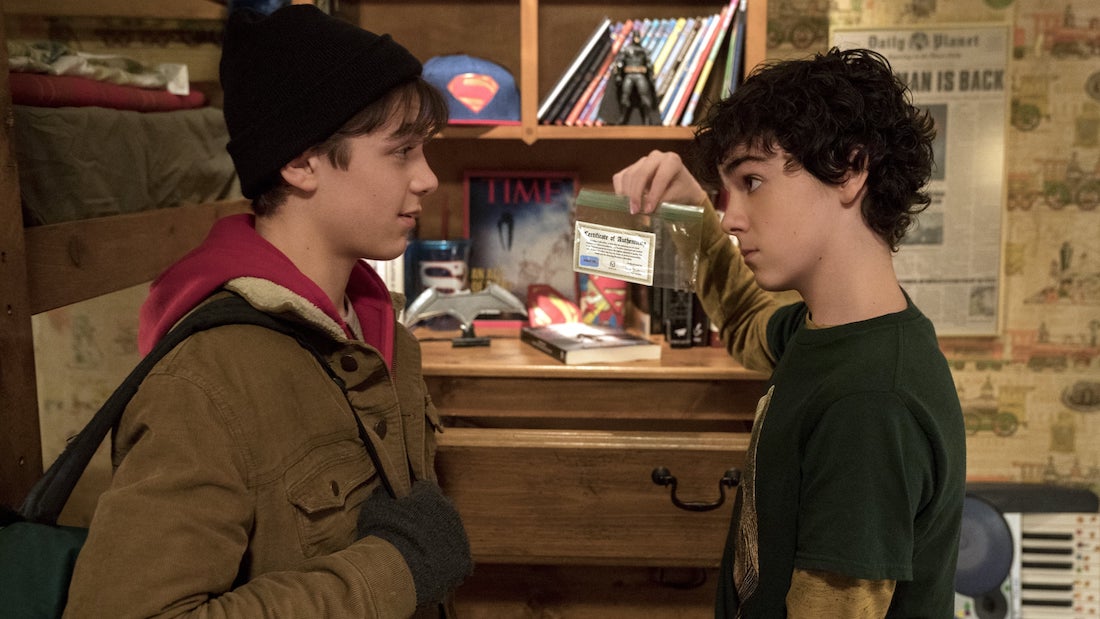 The story is essentially Big (1988) meets Chronicle (2012), but as a crossbreed of Superman and Spider-Man. A powerful but ageing wizard called Shazam (Djimon Hounsou) is auditioning people to assume his mantle, testing to see if they’re “pure of heart” and can become the “Champion of Eternity”. Everyone has failed, until foster kid William “Billy” Batson (Asher Angel) finds himself in the wizard’s cave and is duly granted the powers of SHAZAM (i.e. the wisdom of Solomon, the strength of Hercules, the stamina of Atlas, the power of Zeus, the courage of Achilles, and the speed of Mercury). It also has the side-effect of transforming 14-year-old Billy into a handsome, muscled adult (Zachary Levi) in a red costume and white cape with a glowing yellow lightning bolt on his chest. 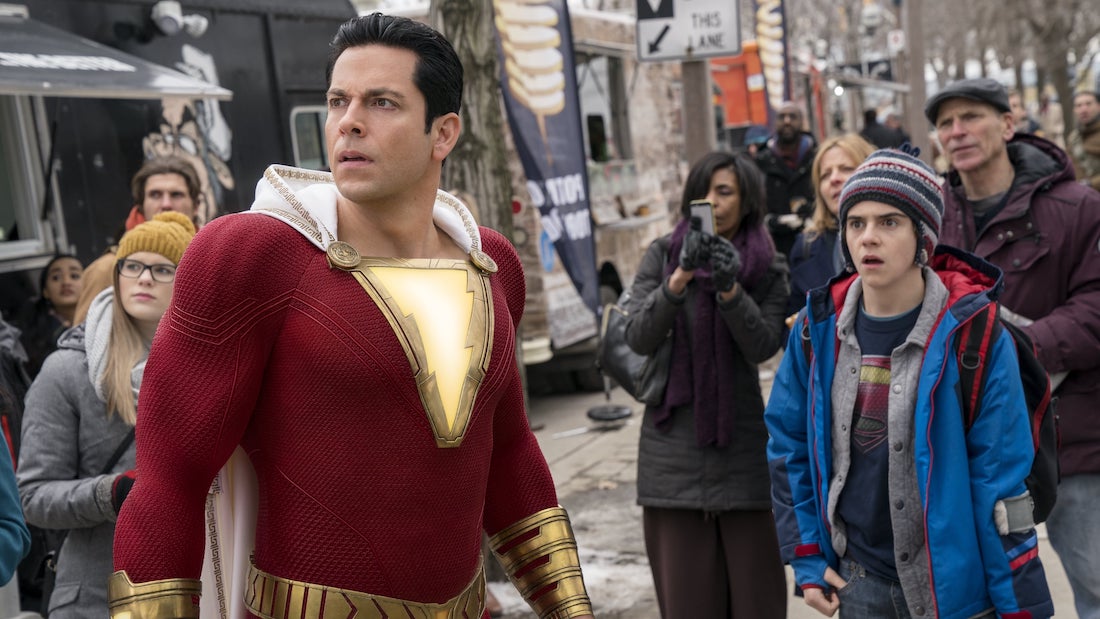 Inevitably, this mostly results in punching through concrete pillars while skipping school, shooting lightning bolts into the air to entertain onlookers, and using Billy’s adult appearance to buy alcohol and get into a strip club. But their tomfoolery and growing internet fame of “The Red Cyclone” is put into sharp relief when Billy encounters a real threat, Dr Thaddeus Sivana (Mark Strong), the black-hearted son of a billionaire who failed the wizard’s test as a kid and has been obsessed with embracing his true calling as a supervillain ever since—having managed to return to Shazam’s lair and allow himself to be possessed by “The Seven Deadly Sins”, grotesque demons that collectively endow Sivana with equivalent power to Billy Batson’s new alter-ego.

Shazam! is an amalgam of many comic-book archetypes, but I appreciated its twists on some overused ideas in superhero cinema. Billy’s not adopted like Clarke Kent, but instead is a foster kid bouncing around Philadelphia because he’s a delinquent determined to find his real mother. This means his home life’s quite unusual, in the sense he’s mixing with a bunch of diverse kids without parents, all taken in by kindly Rosa (Marta Milans) and Victor Vasquez (Cooper Andrews). This gives the film a different vibe, despite some tonal similarity to Spider-Man: Homecoming (2017) because of its high school setting and associated cliches. Both movies even have end credits with loud pop music playing over a child’s sketch drawings come to life.

Unexpectedly, the actor who left the best impression on me was Jack Dylan Grazer as Freddy. He’s a lot of fun and gets many of the film’s best lines, but lands a lot of the comedy through simple expressions and his excellent chemistry with both Angel and Levi as the two versions of Billy. I was surprised to remember Grazer played Eddie Kaspbrak in It (2017), as that character didn’t leap off the screen for me, but in Shazam! he’s quite the scene-stealer.

Asher Angel and Zachary Levi share the lead role (which might prove tricky once sequels have to deal with Angel’s advancing years), and they’re both very good and likeable. The only problem is that, frankly, I never believed Billy Batson/Shazam were the same person because their performances are markedly different. Levi is fantastically goofy and fun as a caped hero, bringing the same charm and likeability he unleashed during NBC’s Chuck (2007–12). It’s a surprise to see Levi in a major Hollywood role like this, honestly, as most will assume he’s a total unknown. His only notable roles have been a minor part in two Thor films and recent appearances on Amazon’s The Marvelous Mrs Maisel. Maybe you’d recognise his voice from Tangled (2010) and have sat through Alvin and the Chipmunks: The Squeakquel (2009), I don’t know, but it’s wonderful to see DC Films continue to give roles to the best people and not the best-known people. 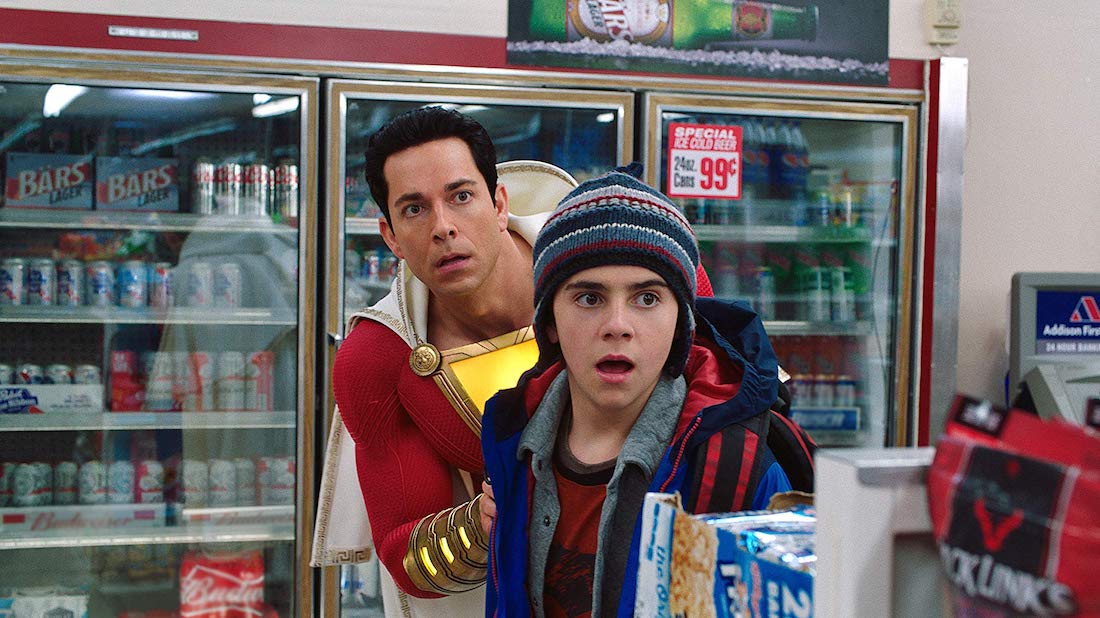 However, as I said, Angel doesn’t behave as goofily as Levi when playing Billy’s true form, so the “illusion” you’re seeing the same person in two different guises doesn’t stick. Angel is playing a relatively cool teen with a weight on his shoulders, whereas Shazam is joyful and easily distracted. I think it’s a problem at the script level, too, as Billy (the kid) has a story arc that’s relatively serious and down-to-earth, whereas Billy (the adult) gets more of an escape into a zany magical world to fight a bald man who can summon gargoyle-like demons from his “glass eye”. Maybe Levi should have studied what Angel was doing more, or Angel should have captured more of Levi’s puppy-dog charisma, but it rarely felt like the two characters were the same person. It’s not a problem that derails the movie, but it would have been nice to get a clearer sense Billy and Shazam are one and the same.

Mark Strong, previously denied a chance of supervillain fame when Green Lantern (2011) tanked at the box office, finally gets to chew the scenery as Shazam’s recurring nemesis Dr Sivana. It’s a relatively two-dimensional character, but Strong acquits himself well and gives Sirvana a bit of genuine nastiness that means you start to fear his appearances – especially when Shazam’s childlike persona means he’s immediately outplayed and outmanoeuvred by an adult who’s spent decades engrossed in the ways of magic. I did enjoy Sirvana’s one unique aspect, in that he was essentially told he was “unworthy” of greatness as a kid, and caused an accident that crippled his father. There’s a seed of sympathy for Sirvana’s situation, helped by the fact the movie actually begins by telling his side of the story. He’s a Lex Luthor type whose movie was interrupted by the emergence of Superman, not the other way around. 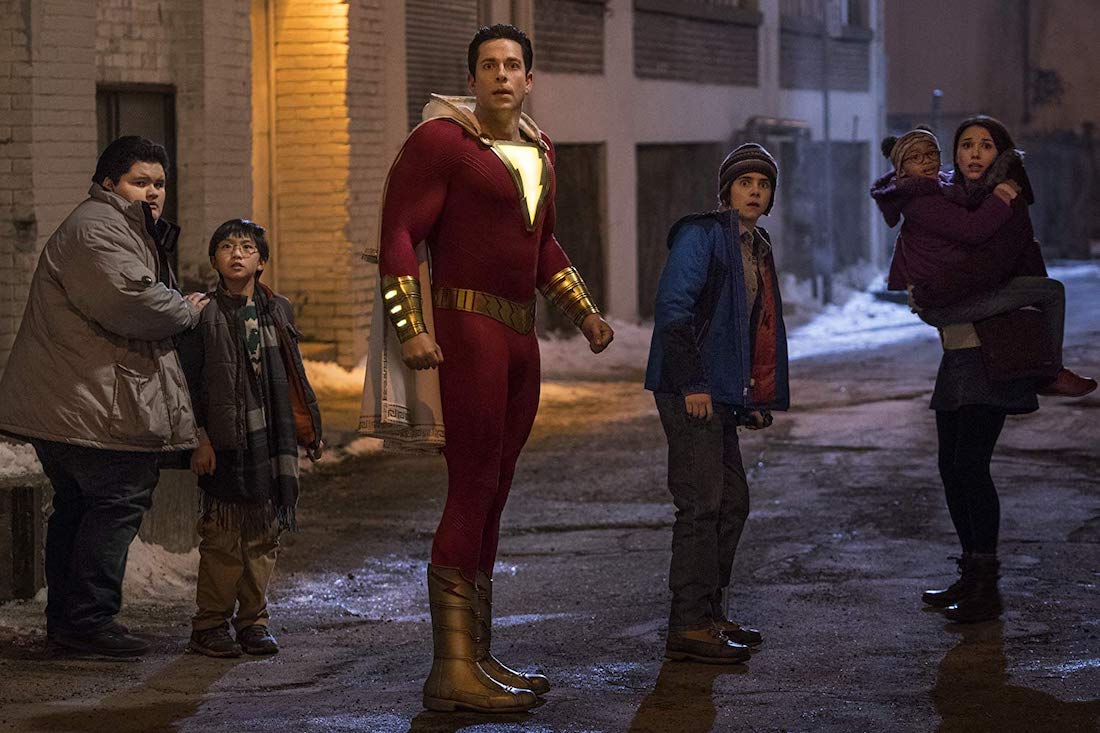 David F. Sandberg (Lights Out) directs this movie, and it’s notable he comes from “The Conjuring Universe”, having previously made horror prequel Annabelle: Creation (2017). Therefore, he follows in the footsteps of James Wan (The Conjuring), who breathed visual life into Aquaman so effortlessly. Maybe there’s something about horror directors that makes them unexpectedly suited to comic-book films, but it’s more likely Sandberg and Wan simply understand the genres they’re working in and play to its strengths. There’s less room in Shazam! to do anything entirely fresh on a visual level, alas, as it takes places in a wintry Philadelphia (actually Toronto) where the ground’s sludgy and the skies are overcast. It’s a cosy-looking Christmas film, oddly, but its humdrum backdrop helps make Shazam’s activities seem more magical. It seems like events are taking place in our world (even with the references to Superman equalling that of Rocky), so it’s closer to following the Marvel playbook. 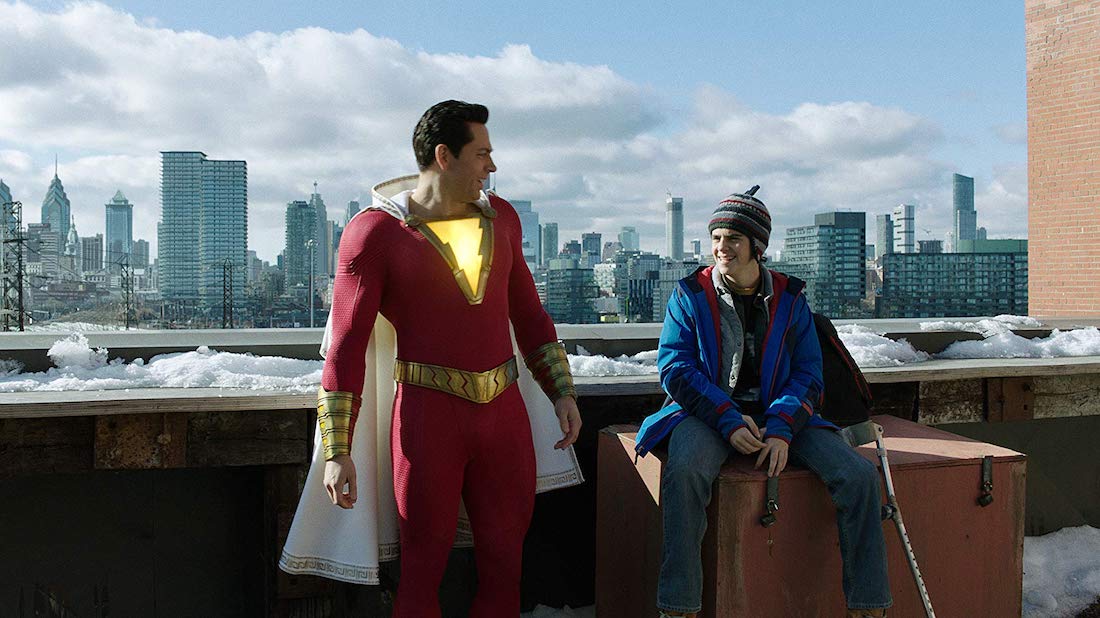 The downsides of Shazam! are that it’s maybe a half-hour too long at 132-minutes, so the protracted third act battle starts to wear thin. The best jokes are also in the trailers, some of which were “spoiled” over a year ago at this point, and the comedy material isn’t fresh anyway. We’ve seen countless parodies of superhero films before now, so Shazam! is basically just another iteration of that tradition. The only fresh joke it has involves someone delivering a monologue who can’t be heard due to distance and weather, which happens all the time in superhero films but has become an accepted bit of nonsense. But the jokes it has are amusing and will make you grin, even if they’re a little familiar or obvious, partly because they’re delivered with great spirit. In some ways Shazam! is like a PG-friendly Deadpool (2016), as the characters are aware of superheroes and the traditions thereof.

Overall, Shazam! plays like a throwback to a time when superhero films were simpler and less ambitious. They got the job done without much fuss. It knows its characters and uses them to tell an entertaining origin story, blessed with a great hook in how the superhero is secretly a 14-year-old boy in over his head. It makes a clear effort to involve different types of people, of varying ethnic backgrounds and physical abilities. It has a strong message about the use and abuse of power, plus how real strength comes from sharing and friendships. It’s also looser with its attachment to the wider DCEU, perhaps because the big picture’s in a state of creative flux, and much like Aquaman it’s allowed to luxuriate in its own charms and mythology. I guess the real test will come with the sequels, as the novelty wears off and the franchise has to see if modern audiences are going to buy into Shazam!’s wackier rogue’s gallery…