Jason Momoa finally gets his time in the spotlight, several years after being hired to play Arthur Curry for DC’s Extended Universe, following a cameo in Batman v Superman: Dawn of Justice (2016) and a likeable but not exactly scene-stealing role in Justice League (2017). The DCEU has become an embarrassment because every movie’s been critically mauled, except for Wonder Woman (2017), but Aquaman continues the trend of their least-known superheroes faring better on the big screen. Maybe big hitters like Superman and Batman just come with too much baggage and expectations, and DC Studios have realised Marvel built their revered Cinematic Universe off the backs of characters like Iron Man and Thor—who weren’t household names with existing mainstream appeal.

Aquaman benefits from three core things: the plot is simple but the story is fun, the character’s relationships are breezy and enjoyable, and the VFX sequences are jaw-dropping in scale, ambition, and detail. They also bring something new to audiences, possibly getting the jump on James Cameron’s Avatar (2009) sequels, by delivering an “underwater Star Wars” aesthetic that’s absolutely stunning to behold. It’s also tongue-in-cheek and fun in all the best and goofiest ways, with enormous sharks and seahorses being jockeyed into battle against all manner of bioluminescent monsters and armoured crustaceans. It’s not always the case that a $160–200M movie will deliver photoreal eye-candy from start to finish (ahem, Justice League), but I don’t recall any moment when Aquaman pulled me out of the movie thanks to a phoney-looking effect. And considering so many complex sequences have actors “underwater” with CGI hair shifting in the currents, riding digital monsters, while talking and fighting, the fact it looks incredible is a testament to the many VFX teams responsible. 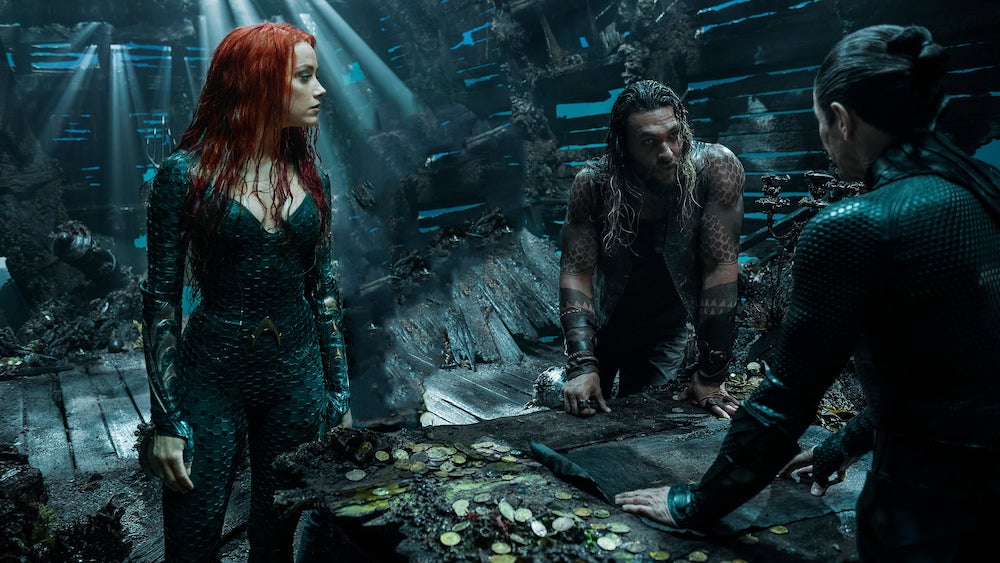 As one expects with “origin stories”, Aquaman hits many familiar story beats. A lighthouse keeper of Māori descent, Thomas Curry (Temuera Morrison), rescues a beautiful Queen of underwater civilisation Atlantis, Atlanna (Nicole Kidman), later fathering her a “half-breed” child they name Arthur (Kaan Guldur, Otis Dhanji, Jason Momoa). Arthur grows up torn between the “two worlds” his parents represent—land and sea—but has turned his back on Atlantis for believing they later killed his mother. It only adds to the movie’s theme that a white woman is seemingly put to death because she had sex with an ethnic man, and the casting of Australian Kidman and Māori Morrison is surely an intentional nod to the racial ugliness Down Under. Director James Wan should know a lot about those tensions, being a Malaysian-born Aussie.

Anyway, Arthur’s grown up being secretly trained by royal advisor Nuidis Vulko (Willem Dafoe) on how to fight, so uses his combat skills and natural super-abilities to help ordinary seafarers as an adult. That’s until he’s called back to Atlantis by the appearance of Mera (Amber Heard), who wants him to claim his birthright as king before his half-brother Prince Orm (Patrick Wilson) declares war on the surface-dwellers.

There are elements here we’ve seen many times, and it obviously pulls a lot from myth, so it’s no surprise that Arthur/Orm have a similar relationship to Thor/Loki over in the MCU, only they’ve been estranged from birth and don’t know each other. There’s even an underwater duel that recalls the gladiatorial battle from Thor: Ragnarok (2017), only with conspicuously “white” Atlanteans cheering on their blonde-haired prince over his olive-skinned rival. 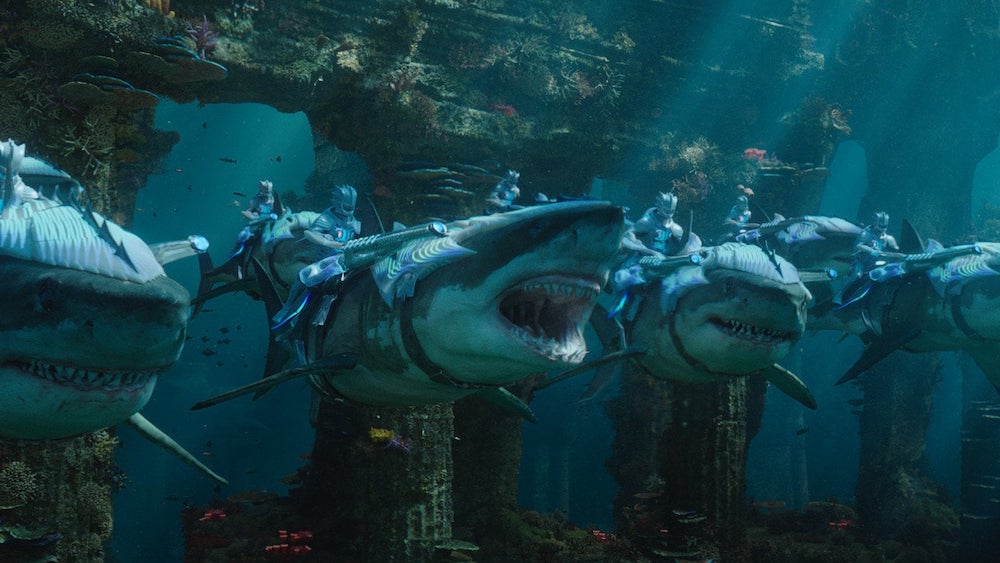 What Aquaman gets right is making big-budget entertainment on a huge scale, while keeping the ideas intimate, neat, and involving. Arthur’s “half-breed” status is neatly amplified by the casting Momoa (whose father was a Native Hawaiian and mother was of mixed European and Native American descent), then to have Orm presented in a very Aryan way as the “pureblood” Master Race of the ocean, who perhaps understandably has an issue with men on the surface polluting their environment. Aquaman isn’t the first superhero movie to tackle racial issues, but it arrives at a time when the message is once again worth hearing loudly – particularly to impressionable young minds naturally drawn to these tales, and certainly kids who don’t conform. Wonder Woman was deserved feted for being a feminist movie in the best ways imaginable, and Aquaman provides a nice racial bookend to those intentions. Maybe the DCEU’s Clark Kent should steer towards issues of immigration, and wealthy Bruce Wayne tackle the imbalance of wealth in society?

There isn’t really much else to say about Aquaman, other than to praise how effortlessly it entertains for a whole 143-minutes. I’m genuinely struggling to think of a scene that was tedious, as even the side-quest adventuring of Arthur and Mera in the Sahara Desert was a fun diversion—a bit like a superhero National Treasure (2004) or Tomb Raider (2018), looking for the next piece of a puzzle in order to find the fabled Trident of Atlan. Momoa’s alleged onset antics came in for criticism prior to the movie’s release, but his onscreen relationship with Amber Heard comes across well. They make for a charming duo, and I’m not even sure their relationship was supposed to be a big romance. It was more like two new friends or siblings having fun together, learning about each other’s lives. There’s more to be done in any sequels perhaps, but Heard was pleasant and made for an effective action star. So was Nicole Kidman, more surprisingly—or her digital stand-in at any rate. 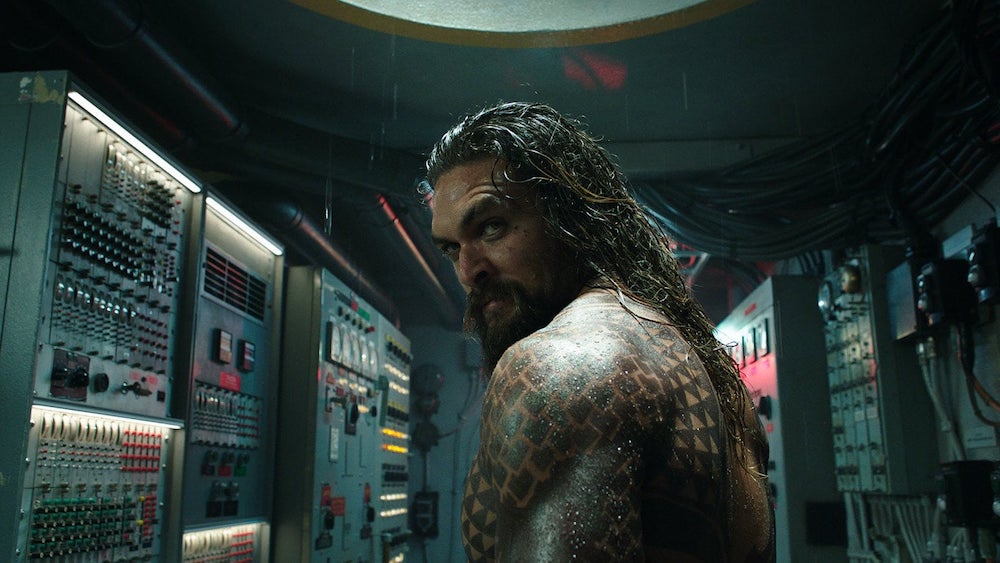 James Wan deserves the most accolades, directing Aquaman with great skill and surehanded competence with the huge array of VFX. His horror movies have shown he works well with good actors—Patrick Wilson proves this, having appeared in five now—and Furious 7 (2015) opened the door to let him spread his wings with Aquaman. Or should that be flippers? Wan can deliver beautiful compositions like Zak Snyder, surpasses him with the quality of the bruising action, but never loses anything with the quieter character moments and comical interludes. It probably helps that he’s a better screenwriter, too, and had a hand in the story. I dread to think how tin-eared and over-sexualised Aquaman would’ve been in Snyder’s hands, and the DCEU should be biting Wan’s hand off to helm sequels. Or, frankly, help steer the entire enterprise forward into whatever comes of The Flash and Green Lantern movies. He’d probably have a very good Superman in him, reflecting the hope and optimism that character’s failed to bestow on audiences since Man of Steel (2013).

Maybe the best compliment I can give Aquaman is that it felt and behaved like a true comic-book movie, with very little of the deadening seriousness that’s killed most of the earlier DCEU movies—in an understandable effort to differentiate themselves from frothier Marvel fare, while coasting on the success of The Dark Knight trilogy. Aquaman retains some of the darkness and edge Warner Bros. want to see, particularly in the tougher violence, but it also knows when to throw in a huge hammerhead shark in battle armour ridden by Willem Dafoe. It’s that rarest of things: a DCEU movie you can’t wait to dip into again.