The original Jumanji (1995) was a fun idea about an enchanted board game that could suck players inside its fictional world, or spew various jungle creatures out into reality as forfeits. It was a moderately entertaining effects-heavy adventure for Robin Williams, and a notable post-Jurassic Park (1993) attempt at creating convincing digital animals. Indeed, its challenge was arguably tougher because we know what elephants and lions are supposed to look like!

Its CGI hasn’t dated well (those mischievous monkeys looked terrible even then because fur was still a tough nut to crack), and Jumanji hasn’t crossed my mind too often in the 22 years since it premiered. I was 16 when it came out, so perhaps those slightly younger embraced it more warmly? Whatever its legacy, Hollywood have worryingly begun started excavating the 1990s for signs of new franchise possibilities… 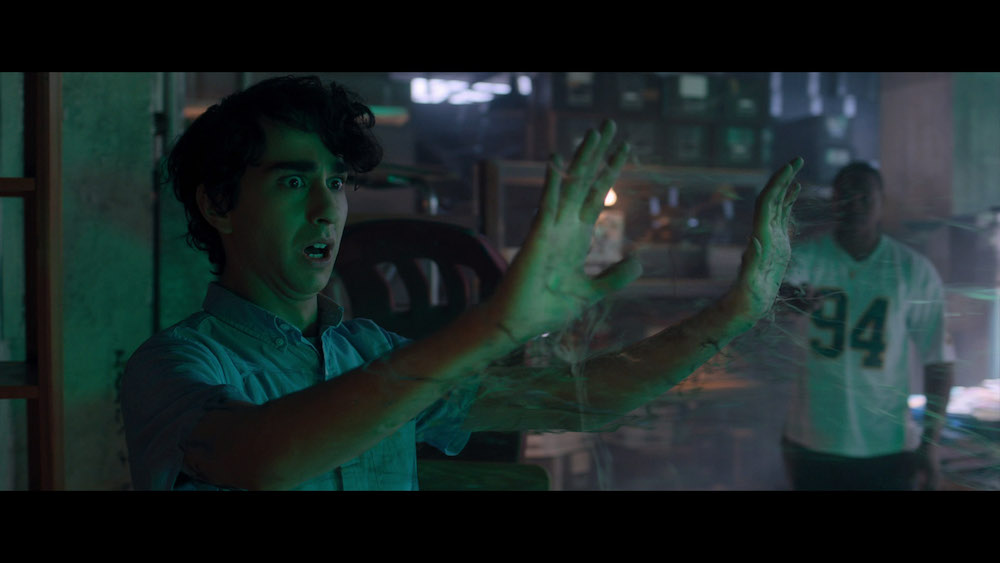 To its credit, Jumanji: Welcome to the Jungle avoids retreading old ground and re-staging the first movie with snazzier visual effects (although there are strangely no monkeys to get the fur right this time). Instead, it cleverly reverses the concept (well, explores one aspect of its lore the original chose not to focus on), while updating things for modern trends and sensibilities. 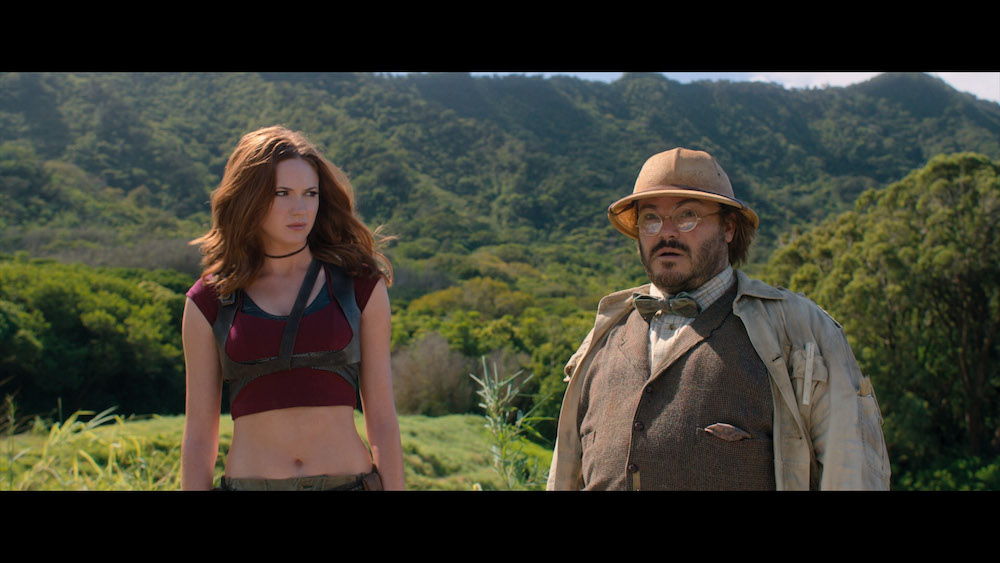 Together, they must return a gemstone known as the Jaguar’s Eye to its rightful place inside a giant statue overgrown by vines, pursued by mercenaries employed by villainous Russel Van Pelt (Bobby Cannavale), who wants the jewel because it gives him with the ability to control animals. Or course, the teen adventurers also have to contend with man-eating hippos, stampeding rhinos, venomous snakes, killer crocodiles, and all manner of nasty insects the jungle environment throws at them.

The fundamental creative choices underpinning this sequel are what keep it buzzing along, buoyed by the enjoyable chemistry of the starry cast. It’s such a great idea to reverse what happened in the 1995 incarnation (with the jungle leaking into suburban reality, not the other way around), and updating the concept into video game parlance means it appeals more to the demographic it’s aimed at. There are also some genuinely amusing jokes and ideas sprinkled throughout, although they all worked better when condensed into the film’s trailer. Welcome to the Jungle is 119-minutes long and could’ve done with a trim, as the premise and style of jokes start losing their lustre. 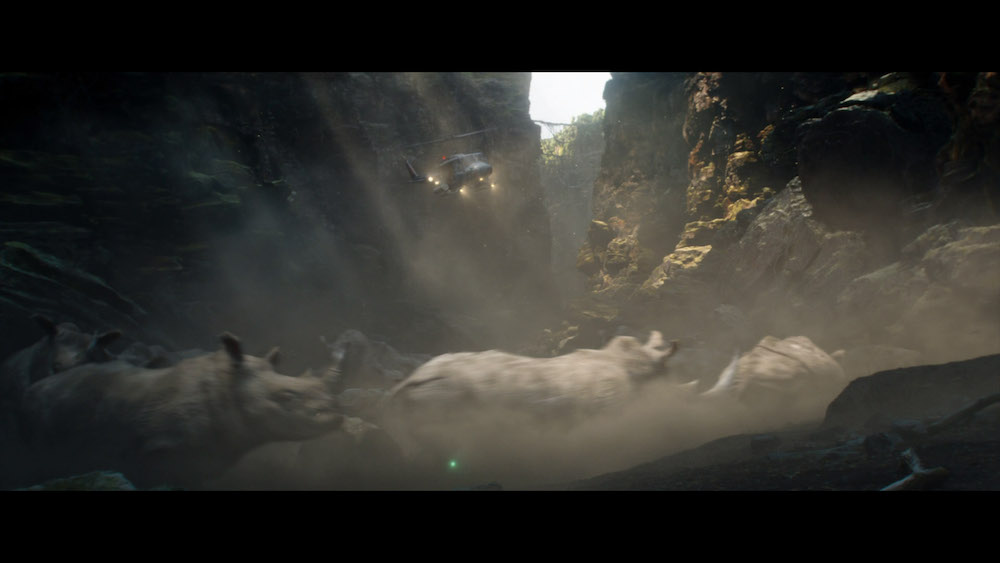 But it’s rare for a $90 million high concept family comedy to work as well as this one. There are some obvious themes and predictable character arcs in place, but they’re handled nicely and I’m sure younger audiences may appreciate the message. The characters here all have body issues, or low self-esteem, or social blindspots, but once they inhabit their avatars they begin to see the themselves and each other very differently.

Spencer goes from zero to hero now he has bulging biceps; Martha likewise becomes more noticeable and physically capable; Bethany has to live without her smartphone and reliance on being attractive to men; while Fridge has to find ways to succeed that don’t rely on his size and strength. So they’re each rediscovering themselves, finding new strengths internally, and ultimately bond as a team in order to beat the game and overcome its obstacles.

It’s just unfortunate the characters are stereotypes in whichever reality we’re in, and in Kevin Hart’s case he plays an illiterate black athlete who becomes a glorified baggage handler. Didn’t anyone pick up on that? 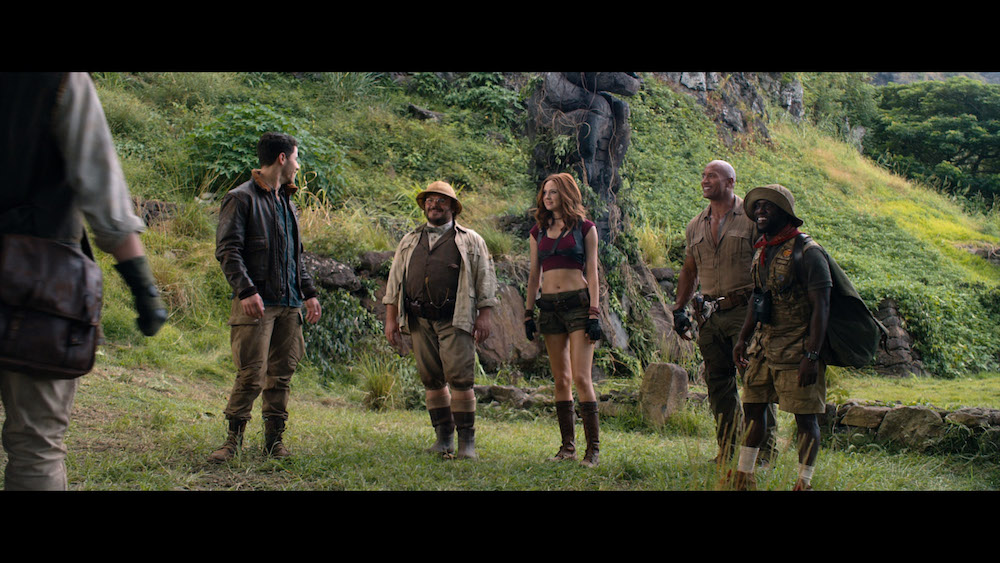 Unfortunately, what lets Welcome to the Jungle down is that the story struggles to take us anywhere very exciting or fresh. One can argue the game is intentionally cliched, but it’s worrying how so few of the scenarios get the pulse racing. The best sequence is a low altitude helicopter ride above the heads of some rampaging rhinos, but otherwise the film struggles to deliver action that grabs your attention. It’s primarily lots of running through the jungle chased by men on motorcycles, with the occasionally CGI jungle critter making an appearance. Filmgoers may be overstimulated these days, but that’s no excuse for providing something that, ironically, plays like a movie with mid-’90s limitations of scope.

Some of these problems fall on director Jake Kasdan’s shoulders. He’s man with a hit-and-mostly-miss filmography that doesn’t suggest he was perfect for this material. His promising debut Zero Effect (1998) gave way to middling studio comedies like Walk Hard: The Dewey Cox Story (2007), Bad Teacher (2011), and Sex Tape (2014). And while Welcome to the Jungle enjoyed incredible and unexpected success (grossing $956 million in late 2017), this isn’t a movie you’d honestly say is well directed.

The camerawork is merely functional and adequate, with little distinguishing it from dozens of other films, while the action choreography is flat and uninspired. There are fights that just don’t take advantage of The Rock’s skills in this area, or whatever Karen Gillan might’ve picked up from working on the Guardians of the Galaxy movies. It even feels like much of the movie takes place in the same area of Hawaii, perhaps now overfamiliar to fans of the various US TV shows that film there. Kasdan got lucky being asked to make a script that’s hard to completely screw up, if the casting’s spot-on. Which it is. 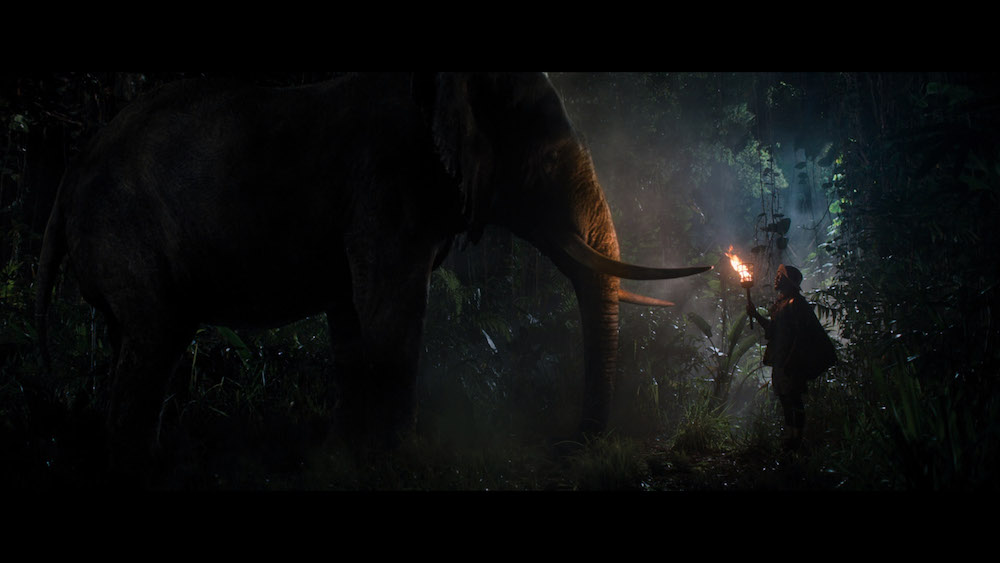 Dwayne Johnson’s been swinging into all manner of movies to give them a boost of charisma for years now. It’s almost become his calling. He seems to work particularly well alongside Kevin Hart in comedies, which helps their character’s dynamic. Jack Black’s star has faded since his early-2000s heyday, but he’s on surprising good form here as a preening girl trapped inside a fat man’s body. It would have been easy to go overboard with some Valley Girl stereotyping, but Black gets Bethany’s mannerisms just right to make you believe there’s a young lady behind his scruffy beard. Karen Gillan’s perhaps the weakest link, but she looks the part and earns a few giggles when her character is tutored about how to bite her lower lip sexily.

Jumanji: Welcome to the Jungle is a great example of how to resurrect an old idea, by giving it a fresh spin that doesn’t betray anything that came before. Although I’m sure diehard fans will join me in being confused by how time flows when you’re in the game (a month equals ten years, and if you finish it you’re returned to the exact time you left), because that flies in the face of what was established to make Robin Williams’ character so tragic. I wish it was more exciting and had more surprises and jokes up its sleeve than what the trailer spoiled, but this is no-nonsense fun for the family. 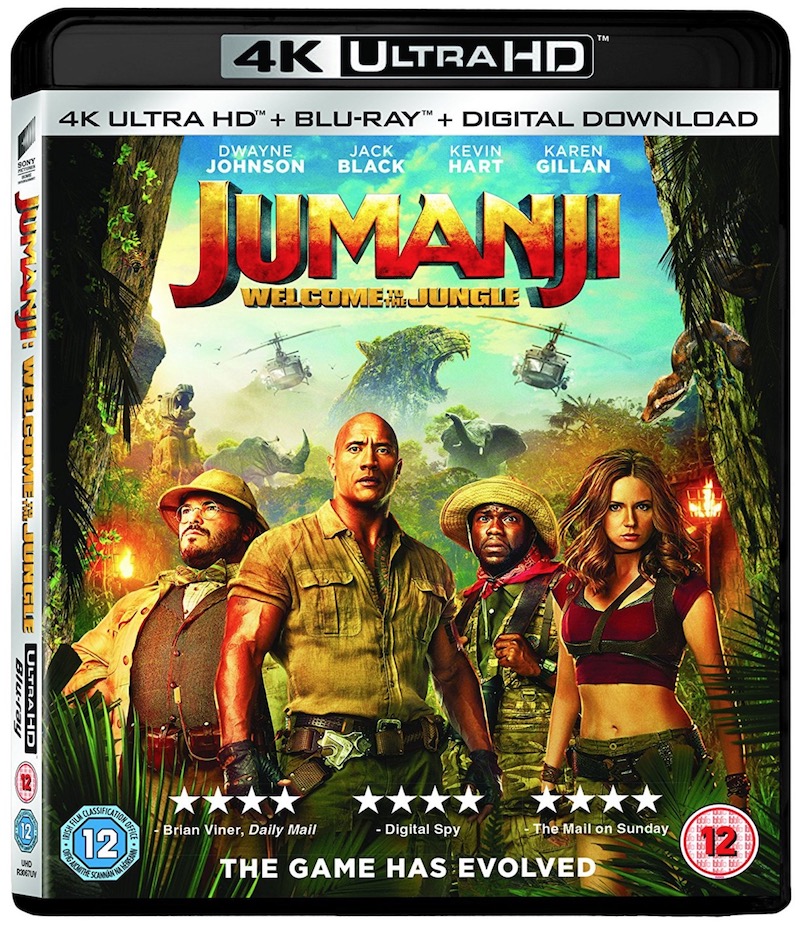 Sony tend to deliver benchmark Blu-rays, and their 2160p 4K Ultra HD edition of Jumanji: Welcome to the Jungle is another. Textures, colours and fine detail is superb throughout the 2.39:1 image, with beautiful vistas and minimal video noise. It even contains a premium Dolby Vision presentation, meaning the high dynamic range (HDR) is constantly changing according to each frame displayed.

The film was shot digitally at 3.4K using the Arri Alexa Mini camera, the source material finished at 2K as a digital intermediate, then upscaled to 4K. It’s an improvement on the 1080p Blu-ray included, particularly if you happen to have Dolby Vision, but watching the HDR10 “downgrade” isn’t exactly painful.

Those lucky enough to have a Dolby Atmos setup will also enjoy that mix on the UHD disc, but the Dolby TrueHD 7.1 (48kHz, 24-bit) down mix also available is very aggressive and delivers lots of fun aural effects and atmospherics to draw you into the world of the game. I particularly enjoyed the growling motorcycles, surround sound at the bazaar, and other environmental touches. The regular Blu-ray’s DTS-HD Master Audio 5.1 track is no slouch either.

The extra features are all stored on the accompanying Blu-ray disc: