One cinematic universe that doesn’t get much attention is The Conjuring’s, which has resulted in two movies of its own, and prequel spin-offs for its most popular phantoms. The Nun is currently being made by Corin Hardy (The Hallow), The Crooked Man is in development, but we now have two movies focusing on haunted doll Annabelle—of which this movie reveals the origins.

Annabelle (2014) was sold as a prequel to The Conjuring (2013) that would explain the origin of the doll, but it was really just an earlier ghost story that involved Annabelle in the late-1960s. Creation is a better stab at what audiences expected from the first movie, boasting a stronger story to explain where Annabelle came from and how it became a “conduit for evil”. 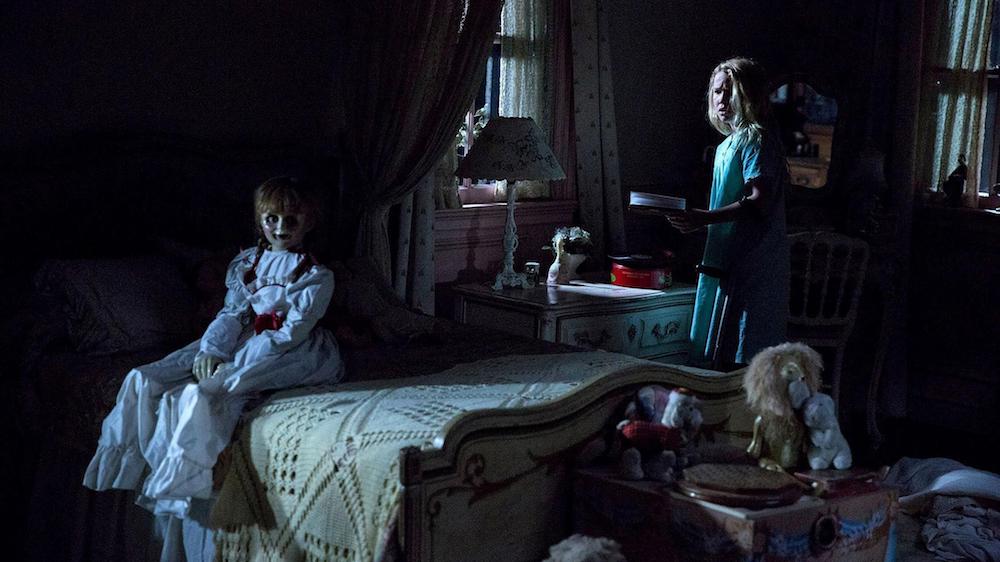 The first Annabelle movie was directed by The Conjuring’s own cinematographer John R. Leonetti (who previously made garbage like Mortal Kombat: Annihilation and The Butterfly Effect 2), so it was little wonder that movie stank. It was jump-scare cinema at its most numbing, and nothing about the story has lodged in my head. Indeed, one of Creation’s biggest misstep is thinking audiences still remember, or care about, what happened in the original. When this prequel’s denouement bridges the gap to its own sequel, it’ll likely be a head-scratcher even if you saw the first Annabelle.

It’s a shame Annabelle: Creation leaves you feeling confused as the credits roll, because it’s narrative much lot stronger and there are plenty of effective moments and well-delivered scares, courtesy of David G. Sandberg. His debut Lights Out (2016), a feature-length treatment of his acclaimed short (which earned plaudits from the likes of Peter Jackson), was a big disappointment to me. But this tells a much better story that doesn’t rely on one visual gimmick. I’m surprised its success has landed Sandberg the job directing Shazam!, the new DC Extended Universe movie, but Creation proves he can be trusted to play around in someone else’s sandpit without laying a turd in there. 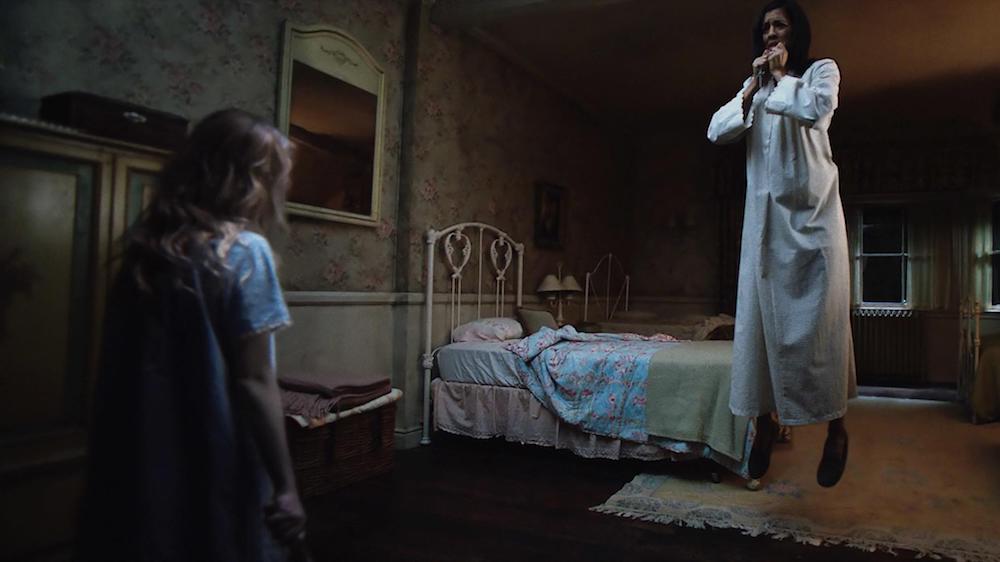 It’s 1955 and six homeless orphan girls are taken to live in a farmhouse owned by dollmaker Samuel Mullins (Anthony LaPaglia) and his bedridden wife Esther (Miranda Otto), chaperoned by sweet Sister Charlotte (Stephanie Sigman). 12 years ago the Mullins’ tragically lost their daughter Annabelle, or “Bee” (Samara Lee), in a car accident… but now they’re ready to let the laughter of children back into their lives. All they’ll get is screaming.

Janice (Talitha Bateman), who can’t walk unaided because she suffers from polio, starts hearing noises and finding creepy notes with ‘FIND ME’ handwritten on them. Her best friend Linda (Lulu Wilson) sneaks into Bee’s locked bedroom and finds the titular doll locked in a cupboard wallpapered with scripture. That’s a bad sign. The other girls start seeing weird shadows and hearing whispering voices…

Annabelle: Creation may be part of the burgeoning ‘Conjuring series’, but it’s fair to say most recent horror movies have been inspired by James Wan’s Insidious (2011), which he directed shortly before The Conjuring. The two movies tend to get conflated in people’s minds. Insidious is the one with Patrick Wilson. Oh, that doesn’t help? It’s the one with the ‘astral dimension’ psychics can travel to, known as ‘The Further’. Stranger Things broadly stole from it when creating the ‘Upside Down’, but does Stranger Things really do anything but “pay homage”? 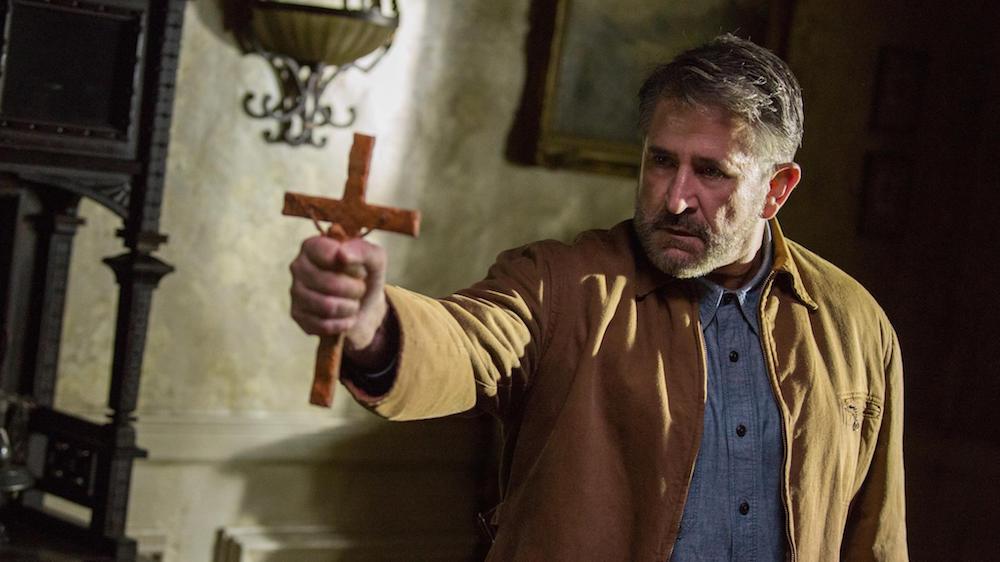 Wan’s approach to horror is very much on vogue still, as horror’s been a reliably performer at the box-office, in a culture where it seems like the only thing that’ll get people into the cinema are superheroes. Creation at least has a valid excuse for echoing Wan’s style so closely, but there’s certainly a real danger these movies are lacking their own personalities. They all look, feel, and behave like one another. You can almost predict when things are going to move in the background (the frame is often left tantalisingly “empty” on one side, drawing your eye to a door or hallway). Or guess when a jump-scare’s about to happen… or even when one’s going to be denied.

All horrors have their bag of tricks, of course. Part of the fun is letting audiences feel teased by what’s going to happen next, as the anticipation is often more pleasurable than the scare. And never overestimate the pleasure of seeing characters do incredibly foolish things, or make bad decisions, when you just can’t believe they don’t all leave the house and never look back. These movies have a bit of self-awareness to them, of course; enough to come up with plausible reasons for why people can’t do the “obvious” thing to escape their nasty situation, or occasions when they do and it only makes things worse. 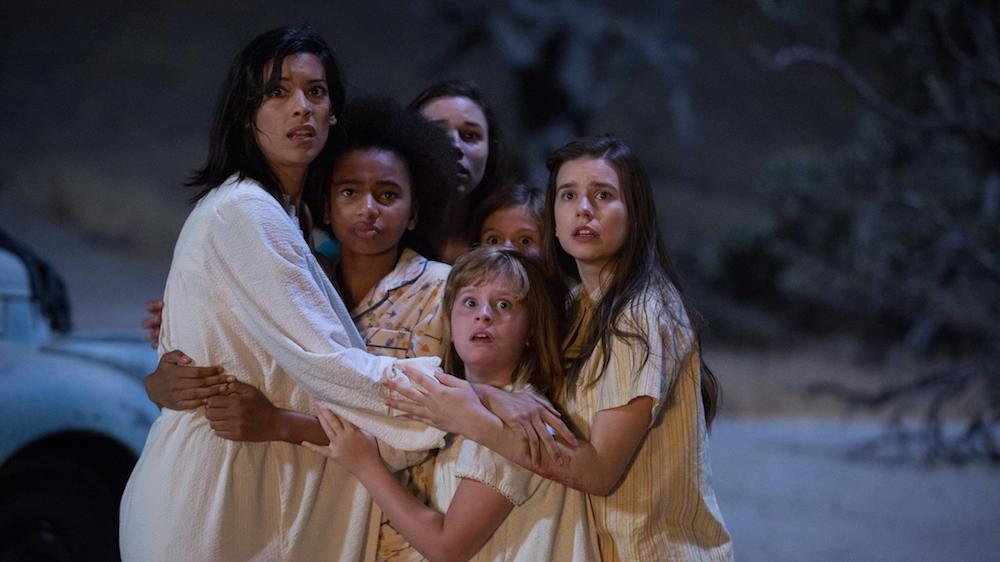 This prequel to Annabelle isn’t pushing boundaries or challenging the norms of the genre, but I found it entertaining to watch. It was an improvement, if never quite in the same league as the linchpin Conjuring movies, which just have more developed storylines and richer characters played by better actors. While Annabelle: Creation is often just a string of jumpy moments and loud bangs after periods of silence, most of them are hair-raising and effectively handled. And there are some more elaborate and clever visual ideas, with menace and humour mixed together. The best is a tense sequence involving a stairlift that’s becomes Janice’s only means to escape scary shit happening upstairs, which malfunctions halfway down and starts taking her back up to where the danger is waiting.

The only things I took issue with was the unconvincing decision for the Mullins to invite orphan girls to their home, knowing they have a demon trapped in an upstairs closet, and Mrs Mullins is bedridden with a face-mask hiding a hideous facial injury. It’s also true that Anthony LaPaglia seems miscast as the patriarch, Stephanie Sigman’s forgettable as a kindly nun, and Miranda Otto is wasted in a much smaller than expected role. Fortunately, child stars Talitha Bateman and Lulu Wilson (also from Ouija: Origin of Evil) are very strong and give the movie a solid foundation to build on. It always did feel ridiculous that the previous Annabelle story didn’t involve kids being targeted by the wooden doll, so this prequel at least understands a haunted toy needs children to play with.