Season 2 of Star Trek: Discovery has been an improvement on the first, which I still liked, but as we approach the finale there are growing signs the writers don’t quite know how to answer the questions raised in the first half. Or if they do have answers, not many of them seem very convincing and satisfying so far. I loved how the Red Angel is Michael’s (Sonequa Martin-Green) mother, even if elements of that reveal don’t make sense, but the initial seven signals remains a puzzle (which I do expect to be resolved because it’s mentioned so much), the origin and motivations of renegade A.I “Control” has been obfuscated, and now silly notions like “time crystals” have been thrown into the mix. Shall we start calling dilithium crystals “warp crystals” now, is that how dumbed-down things need to be?

This week, in “Through the Valley of Shadows”, another of the mysterious celestial signals appeared above Boreth, a holy Klingon planet where monks guard the fabled time crystals. One of which powers the Red Angel’s time-suit. It was also the place where Ash Tyler (Shazad Latif) chose to hide the baby he had with Chancellor L’Rell (Mary Chieffo), and so Captain Pike (Anson Mount) decides to beam down to the monastery to retrieve a time crystal. The whole matter of time crystals may seem absurd in the Trek universe, as the show hasn’t previously associated time-travel to magical minerals (it’s usually involved theoretical science), but there was one intriguing side-effect in how time passes differently on Boreth. So when Pike arrived inside the monastery, he was greeted by a sage Klingon monk called Tenavik (Kenneth Mitchell, who’ll soon play every Klingon), who revealed he’s Tyler and L’Rell’s grown-up son. 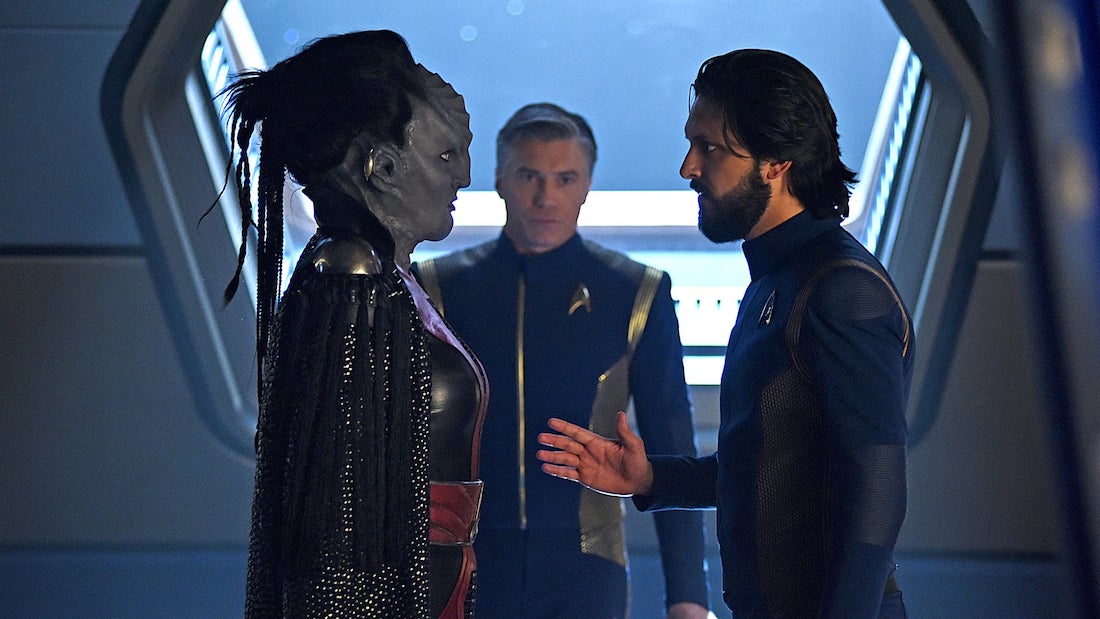 Meanwhile, Spock (Ethan Peck) and Michael investigated a Section 31 ship that was late to a rendezvous, only to discover the entire crew has been jettisoned into space and the systems taken over by Control. Michael also finds the sole survivor of the disaster, her old shipmate Kamran Gant (Ali Momen) from the USS Shenzhou, who later turns out to be another of Control’s puppets the A.I has taken host inside using injected nanites.

There was too much in this episode that stretched credibility. It seemed like an episode that had to move various things from A to B but didn’t have a believable way of doing so. Things just seemed to happen and viewers were expected to roll with it, but there was too much here that wasn’t adding up. It wasn’t aggravating, but I expected better. Things should be clicking into place right about now, but this episode seemed to coast by. I have no idea why a Section 31 ship being late is a serious red flag worthy of investigation, either. Or how Control chose to inhabit someone Michael previously knew and trusted, who was flukily brought back aboard said ship. 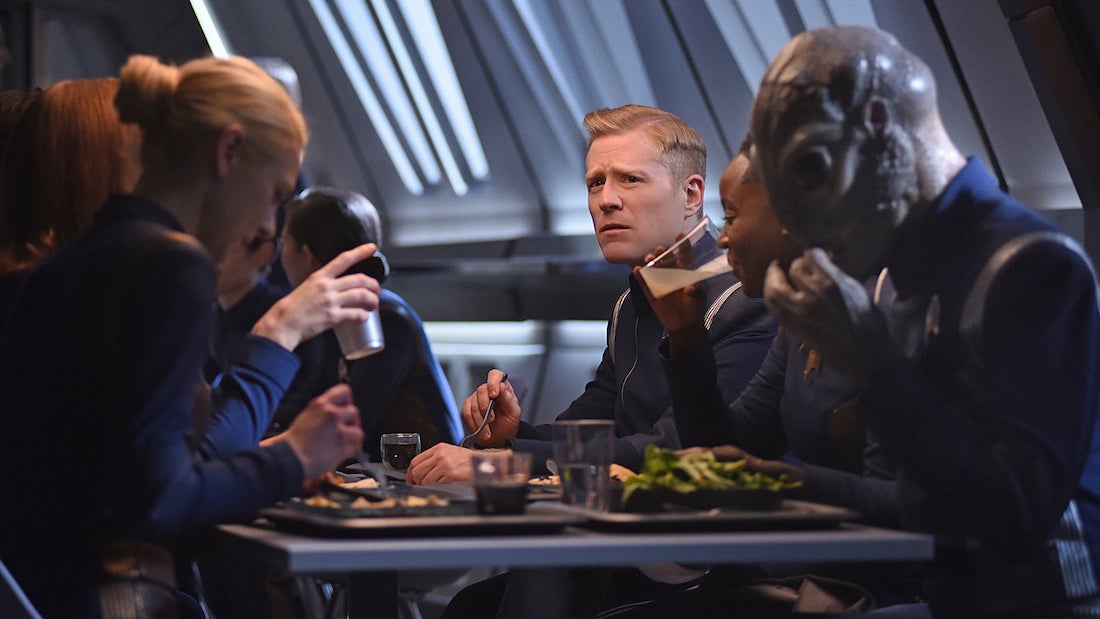 So while it was fun seeing Pike confront his own miserable future and accept that grim fate, in order to take a time crystal away with him, the reasoning for that is dumb and couldn’t be taken seriously. It’s what happens to Star Trek when the writers can’t think scientifically, so resort to mumbo-jumbo for a quick fix. It’s a terrible shame because Anson Mount was fantastic in the scene when he saw his mute self inside a wheelchair/iron lung, with a disfigured head sticking out. That’s Pike’s iconic look from the Original Series episode “The Menagerie”, but it hurts even more now Discovery’s done a fantastic job showcasing Pike as an agile, handsome, respectable Starfleet officer. Seeing him as an invalid, incapable even of speech, makes quite an impact, which is wonderful. It’s the sort of thing all prequels should aspire to do: make the existing material work better because we now have greater knowledge and emotional attachments to things.

Unfortunately, the rest of this episode and how it went about things just felt lazy and unconvincing. Star Trek: Discovery needs to turn things around if it’s going to avoid a slow march to a disappointing, unsatisfying finale.