“Of Lost Things” initially returns us to 1968 and the aftermath of Roger Wakefield’s discovery in Outlander season 2’s finale, “Dragonfly in Amber”, that Jamie did survive the battle at Culloden. As he, Claire (Caitriona Balfe) and Brianna (Sophie Skelton) all pitch into a frantic bout of researching the dusty National Archives of Scotland for any trace of the ‘Dunbonnet’ after his incarceration at Ardsmuir prison, the simmering sexual tension between Roger Wakefield (Richard Rankin) and Brianna starts to brim over into a fully fledged romance. This flirtation turns serious when Roger’s frustration at being unable to find further traces of Jamie (Sam Heughan) also means that Brianna will return to Boston if her mother gives up the search.

The skipping back and forth between the centuries gives the episode a sense of urgency, but the focus is really on Jamie as he fully emerges from his fugue state and finds himself embroiled in the social milieu of the Dunsanys at the Helwater estate. Consequently, this beautifully shot episode, directed by Brendan Maher and written by Toni Graphia, favours Heughan’s skills and he provides a thoroughly engaging performance. 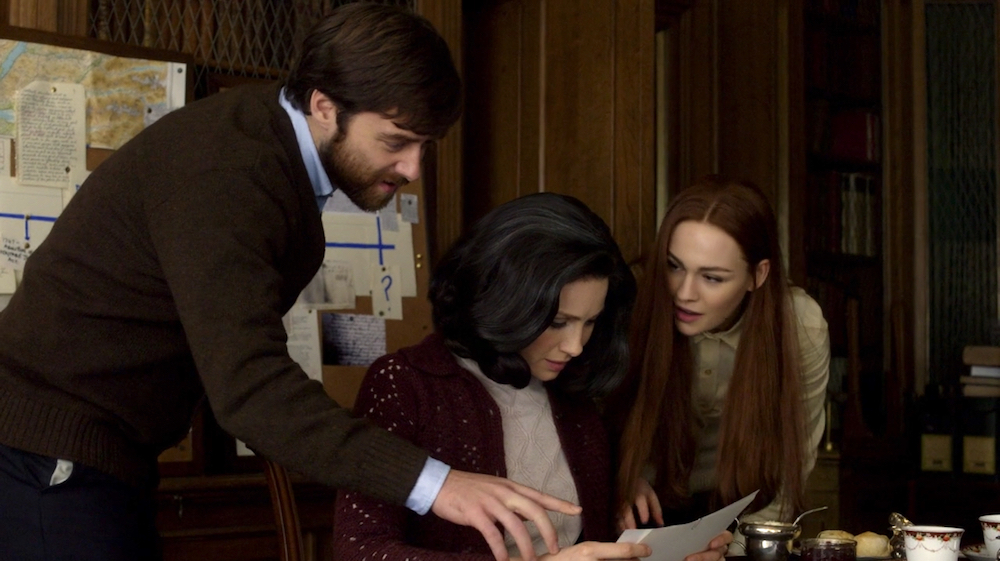 Back in 1756, Jamie’s become the groomsman to Lord William Dunsany (Rupert Vansittart) and assumed the name ‘Alex MacKenzie’. Dunsany’s made it clear to Jamie he respects his honour fighting for a cause and sparing John Grey’s life, and also shares with Jamie the sadness at the loss of his own son at Culloden. There’s a grudging mutual respect between them, but the biggest problem is that Dunsany’s wife Louisa (Beth Goddard) has still not recovered from the death of their son at the hands of the Jacobites. If Jamie’s history is revealed to her then she’ll not spare him from the authorities. It’s a little obvious that the key to moving Jamie’s story forward this week will lie in convincing Lady Dunsany that Jamie is to be trusted and not feared. The gears of the story are rather evident, but it’s still entertaining to see how he wins Lady Dunsany’s trust.

To that end, Jamie is still in a prison of sorts, lacking the freedom to be who he needs to be and hiding behind a different name. Dunsany’s daughter Isobel (Tanya Reynolds) picks up on this when they’re admiring the horses in the stable. “It pains me that my father confines such splendid creatures… a cage is still a cage,” she observes, knowingly. Jamie and Isobel also share a mutual friend in Lord John Grey (David Berry) who, as promised, visits the estate each quarter to monitor Jamie’s progress. The growing friendship between Isobel and John perturbs Jamie and he tries to warn her off a relationship with him, knowing Grey’s true proclivities. In the end, their eventual marriage comes as something of a blessing given the traumatic departure from Helswater Jamie endures at the end of the episode. 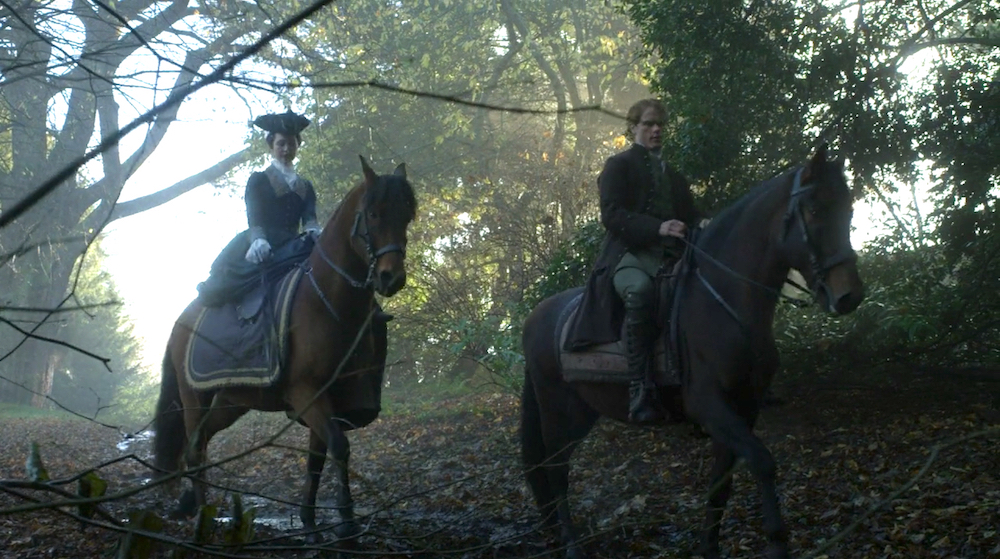 The cause of this trauma is the haughty but naughty Geneva (Hannah James), sister to Isobel, who’s about to be foisted onto the aged Earl of Ellesmere (James Cameron Stewart) in an arranged marriage. Ellesmere is bigoted gentry personified and, when he claps eyes on red-haired Jamie, in a cruel portent of events to come, suggests “if a child of mine had that hair colour I’d drown it before it drew a second breath.” Geneva, a daughter whose patronising attitudes and crude manipulation deserve Jamie’s despatch of her into the mud during a ride out onto the estate, reveals herself to be rather more complex a woman than she seems.

When John Grey’s brother Lord Hal Melton (Sam Hoare) visits Helswater, he recognises Jamie. Geneva uses this to her advantage, plying Melton with enough drink to discover Jamie’s past. When Jamie refuses her advances, she threatens to tell all to her mother. Besides, with her arranged marriage only days away, she’s “damned if my maidenhead will be given to a depraved old goat like Ellesmere.” While blackmail is the driving force behind her demand that Jamie sleep with her, when he does arrive in her bedchamber it’s also clear that she knows a good thing when she sees it. Before she ends up sharing Ellesmere’s bed and a life of sexual drudgery, she admits that she actually lacks any sexual experience and doesn’t know what to do, and this one night with Jamie is “for myself. I want my first time to be with someone like you.” 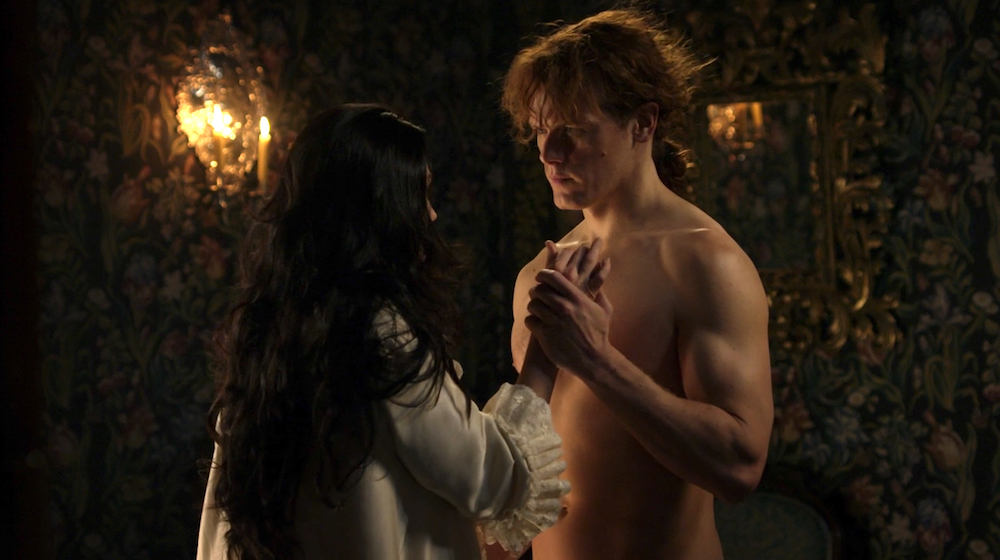 A fearful, inexperienced young woman emerges in this scene and she gains our empathy. It clearly reminds Jamie of his first night with Claire in season 1’s “The Wedding” and how inexperienced he was at the time. With this in mind, he offers Geneva gentleness, kindness, and tenderness. Of course, she eventually mistakes lust for love and her post-coital declaration requires of Jamie a soul searching philosophy given the losses he has endured and his memories of Claire. “What you feel for me now, you could have with any other man. It’s not particular. Love is when you give your heart and soul to another, and they give theirs in return.” That Geneva will end up in a loveless marriage is likely and Jamie feels sympathy for her. She will never have the same kind of love that he had with Claire.

Outlander is tapping into the themes of moral behaviour, sexual fantasy, and the workings of the human heart seen in the 18-century novel that, ostensibly, began with the publication of Samuel Richardson’s Pamela or Virtue Rewarded in 1740, and continued in such works as Henry Fielding’s Tom Jones in 1749. This is emphasised in the move forward by at least 8 or 9 months, to depict a heavily pregnant Geneva alighting from a carriage when she and an unhappy Ellesmere visit the Dunsanys. The consequences of that night are communicated in Geneva’s glances at Jamie, acknowledging the child is his and will be illegitimate by birth. 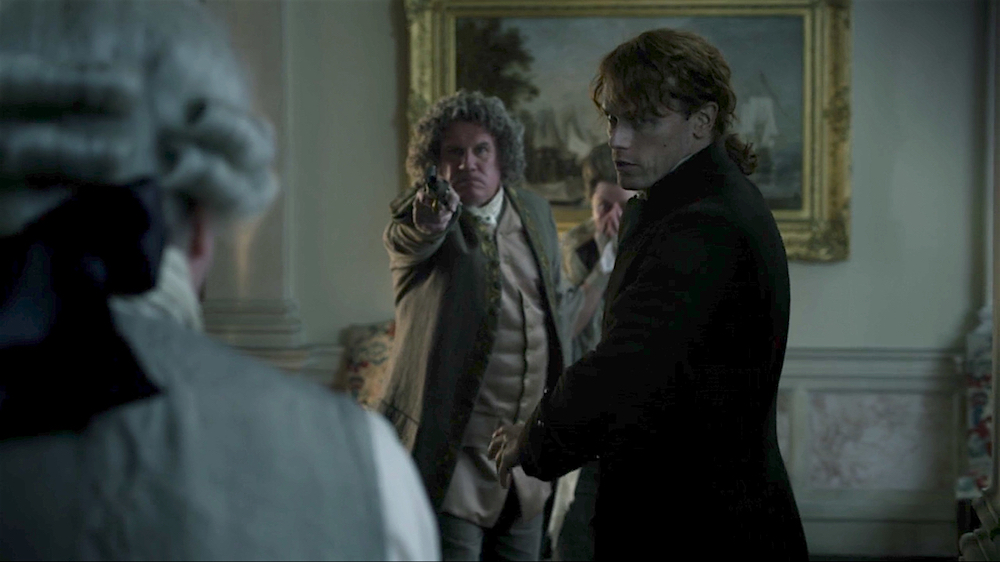 And it doesn’t end there. A frantic ride to the Ellesmere estate ends up with Geneva dying in childbirth, Isobel then blaming and taking her anger out on Jamie and the aggrieved husband ranting that he knows the baby boy is a bastard. He threatens the child with a knife while Lord Dunsany, in a stand off, holds a gun on him. Jamie manages to persuade Dunsany to hand over the gun but Ellesmere refuses to give the child over to the Dunsanys. When he threatens to kill the baby Jamie has no alternative but to shoot him.

Later, Isobel apologises for her behaviour while taking the young boy, now named Willie, out in his pram. Jamie, realising the boy is his, feels an obligation to protect him. Ellemere’s death is hushed up as suicide and, when given his freedom by Lady Dunsany, Jamie requests to remain on the estate under the pretext that he can still send money back to his family in Scotland. It’s also a reflection of making up for his own loss when he couldn’t stay with Claire for the birth of Brianna or keep close to Fergus. He looks after Willie (Clark Butler) until 1764, when it starts to become very obvious the boy bears more than a passing resemblance to his biological father. Polite society will talk and a scandal about the heir to the Dunsany estate needs to be avoided. 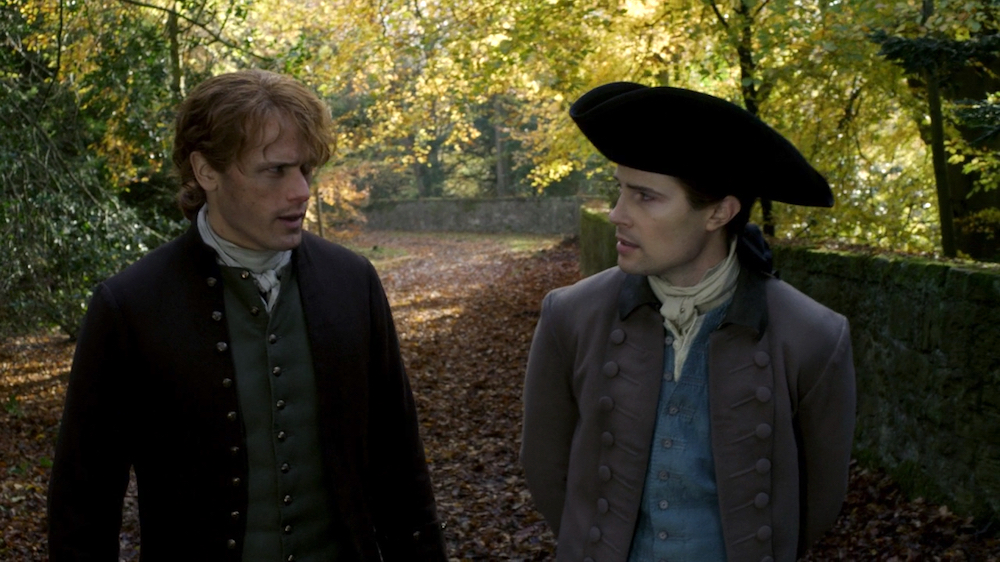 The final scenes at Helswater are very moving. Forced to leave the estate, Jamie asks Lord John Grey to act as father to Willie. As a reflection of the trust between them and in exchange for his help, Jamie offers himself to Grey. A reversal of Geneva’s blackmail for sex, this bargain flatters Grey. “My god, that I should live to hear such an offer!” he gasps, admitting he’s loved Jamie since the first time he met him. But Grey’s an honourable man and he tactfully declines. Instead, he announces his marriage to Isobel, of whom he has grown very fond, and he promises to make her happy. “We all have our secrets. Yours is walking around. Anyone with half an eye can see it…”, he offers to Jamie. His own ‘secret’ is now cloaked, passing straight as an “adequate husband” to Isobel. Once again David Berry and Sam Heughan provide a very satisfying, moving double act and its been a highlight to see this deep friendship between Jamie and John develop over the last few episodes.

And so “Of Lost Things” sees Jamie leave the Helswater estate and head for Scotland, entrusting his son — now baptised with his “stinking Papist” name of William James — to John and Isobel and bequeathing him a carved snake, just like the one Jamie’s brother Willie made for him. Willie’s cries to the man he doesn’t know is his father, as Jamie rides away, end the episode on very sad note. Jamie may have become the “patron saint of lost things” he worships but his years on the Dunsany estate have at least provided a future, ending his fugue and giving him purpose in life again.

In 1968 Claire has given up all hope of tracing Jamie’s whereabouts after Ardsmuir and, feeling nothing more can be done, she and Brianna fly back to Boston. They’ve lost hope of finding Brianna’s actual father, just as Willie lost his real father, too, and Brianna’s growing connection to Roger has also been severed by thousands of miles. While it’s another engrossing episode that continues to add more flesh to Outlander‘s compelling cast of characters, this is all looking very gloomy. However, a reunion is, I warrant, just on the horizon. 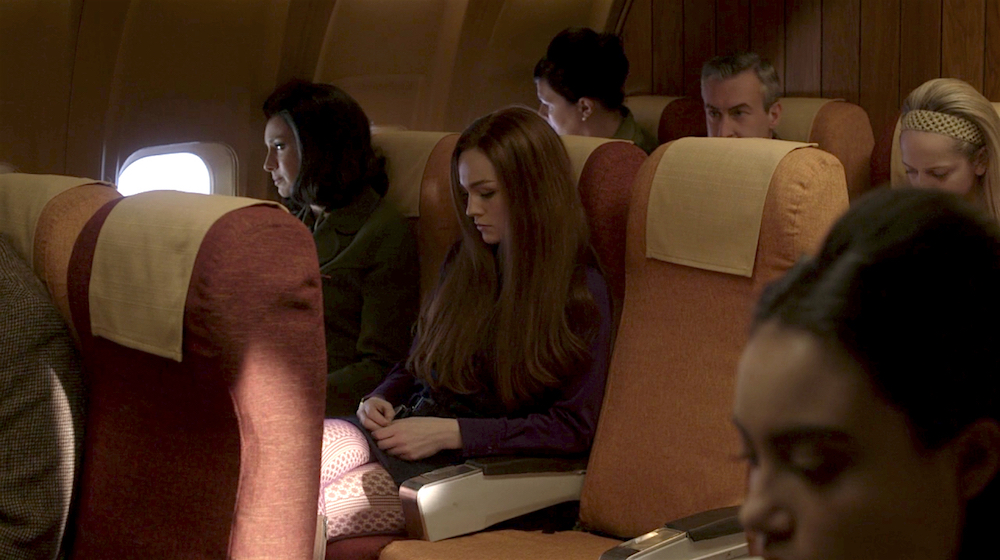