The new season of Outlander continues steadily on its course, with “Surrender” building on themes and subplots established in “The Battle Joined” and proving that its drama can be driven by the frustrating separation of lead characters Claire (Caitriona Balfe) and Jamie (Sam Heughan). With the tragedy of Culloden having been depicted, a much subtler Outlander examines the psychology of loss in these disjointed lives, after the tense build up to, and aftermath of, the defeat in 1746.

There’s also a slightly different narrative viewpoint than that established in Diana Gabaldon’s third Outlander novel Voyager. The book is very much from Jamie’s perspective, as his life continues beyond his separation from Claire. Claire’s story is less prominent and told through her research in 1968, with Brianna and Roger, into Jamie’s survival after Culloden. This was where we left all three of them in Outlander’s season 2 finale. For the third season, producer Ronald D. Moore and his writing staff have instead expanded on the fraught relationship between Claire and her husband in 1949, Frank (Tobias Menzies), to provide a striking parallel story. 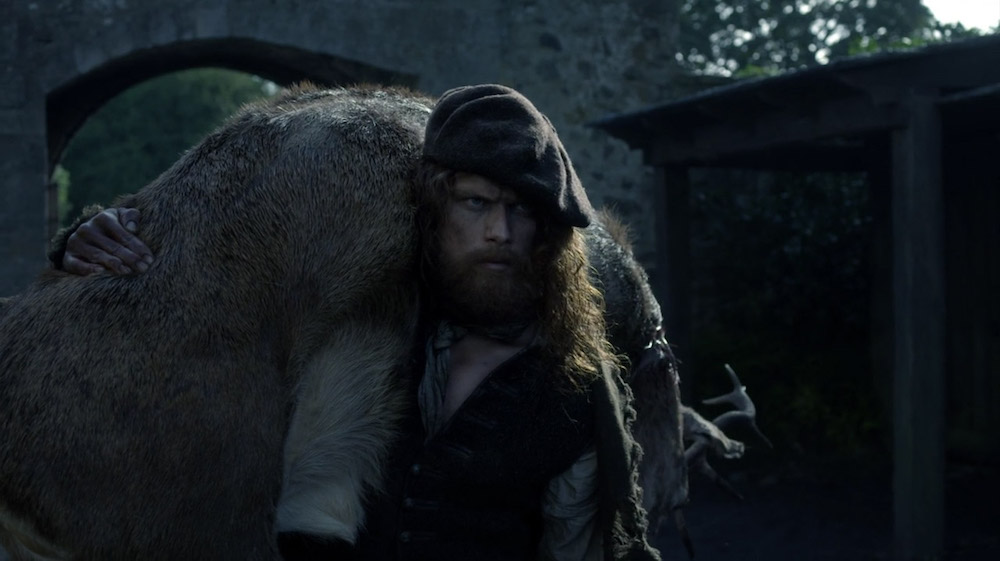 We return to Lallybroch in 1752. Jamie is still a wanted man and his sister Jenny (a splendid Laura Donnelly) and brother-in-law Ian (Steven Cree) are constantly harassed by British redcoat patrols in their search for missing rebel ‘Red Jamie’. We also encounter an older Fergus (Romann Berrux), the French boy taken under Jamie and Claire’s wing during their attempts in France to alter the course of the Jacobite uprising. He’s now part of Jenny and Ian’s family and, as ever, attracts trouble through his hotheaded allegiance to that long lost cause.

As we see him and the other boys, Jamie (Rhys Lambert) and Rabbie (Stuart Campbell), searching the barn for a hidden firearm, it’s clear the story is bound to invoke the dramatic trope of Chekhov’s gun. That gun is going to go off and cause a whole heap of trouble, particularly as a frustrated Fergus brags of his wartime experience to the youngest of the boys. It’s much braver to kill a man with a knife, he says, and his observation that “nothing but flesh and metal between you” is the preferred option does come back to haunt him later when we see it’s his flesh being severed by redcoat metal. 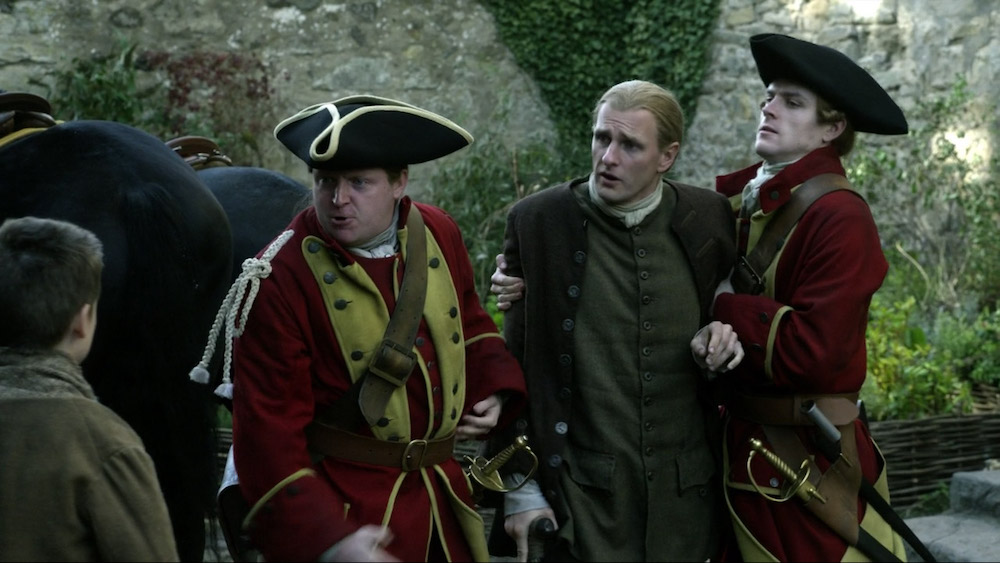 When Ian is again arrested by redcoats, we see how allegiances have shifted in the six years since Culloden. A MacGregor is now serving with the British troops as a Corporal (Ryan Fletcher), and he has no romantic notions about Scottish sovereignty. Threatening to beat the children as Ian’s taken away, he’s marked out early in the episode as an impetuous and violent individual and, easily driven to anger, it’s his sword that eventually tastes Fergus’s flesh. Although, to be honest, Fergus brings this violence upon himself with his arrogant and foolhardy attitude towards MacGregor.

Captain Lewis (Rufus Wright) is searching for the ‘Dunbonnet’, a rebel nicknamed by the locals and whose gossip suggests is a disguised Jamie Fraser. He’s not convinced that Ian and heavily pregnant Jenny know nothing of Jamie since he went to fight at Culloden. “You’ll find no sign of my traitorous brother here,” declares Jenny. Little does she know that, by the end of the hour, she’ll have to turn traitor herself and give Jamie up to the Captain in order to save all their lives and collect the reward for his capture. Allegiances, whether for good or ill, shift throughout the story, be that to a way of life rapidly changing under British jurisdiction, or simply to save lives in Scotland, and deciding to return to your true calling as a healer in the Boston of the 20th-century. 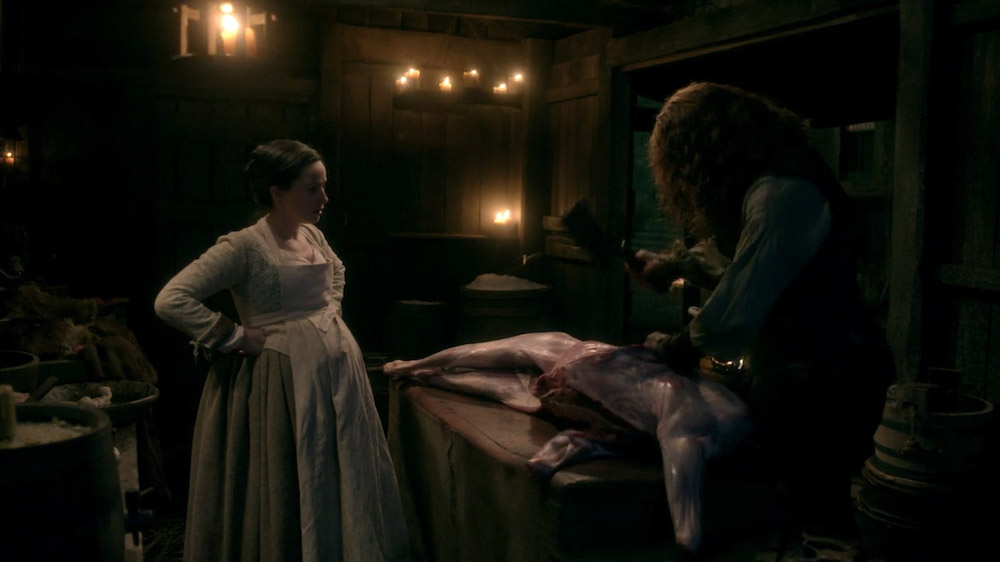 Jamie has returned to a life in the wild, as both hunter and the hunted. He’s entered a fugue state, still suffering deeply at the loss of Claire, and has found solace and anonymity in nature. As a solution to the degradation of so-called civilisation, his isolation has become a respite from the alienation and incompleteness of his own self. His hunter’s instinct is demonstrated by a keen ability to bring fresh deer to the Lallybroch dinner table. Yet, he still sees Claire in those around him. Like his vision in “The Battle Joined”, he momentarily sees Claire in Jenny’s place as she picks herbs from the garden.

But he’s also a fugitive and knows he’s unable to take the fight to the British, despite Fergus’s enthusiasm for it. Fergus’s desire to slit their throats is, as Jenny reminds him, a counterproductive one. It will simply bring the whole garrison to Lallybroch. Jenny’s equally perceptive about Jamie’s brooding silence. While the troops look for the elusive Jamie, and lying to the British comes easy, she acknowledges that he’s never returned to Lallybroch and they’re unlikely to ever find him. “James Fraser has nae been here for a long, long time,” she claims, alluding to his complete withdrawal from life, his utter surrender to guilt, loss and grief. Sam Heughan is exceptional playing this bearded, haunted Jamie Fraser. 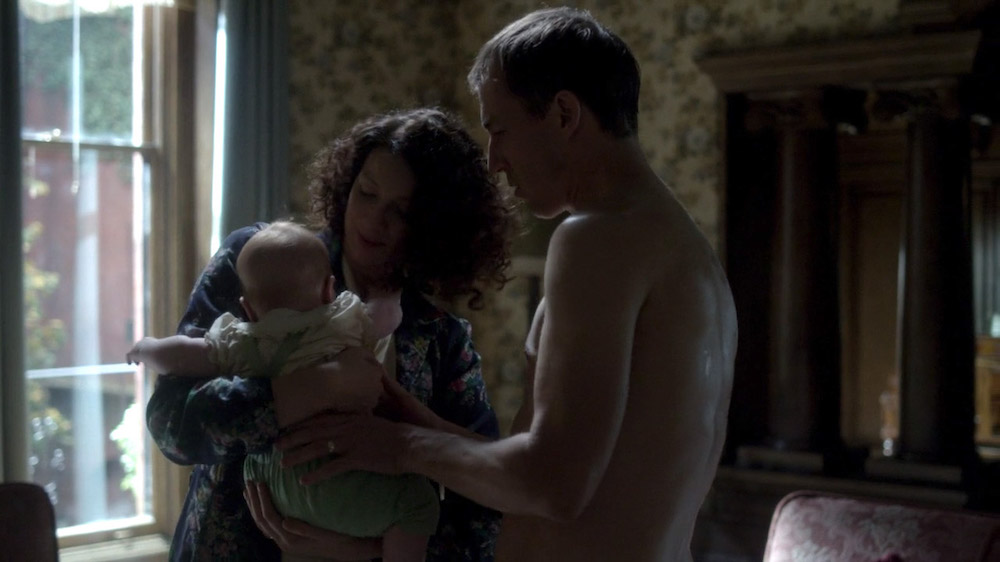 While this may offer a salve to her equally discontented intellectual life, as she spends her time raising Brianna, keeping house, and hosting parties, Frank’s hope that his wife has come back to him is ultimately dashed. They might make love, but behind Claire’s closed eyes Frank knows she’s thinking about Jamie and her feelings for him are a betrayal. He leaves her with no place to hide when he declares: “Claire, when I’m with you, I’m with you. But you’re with him.” 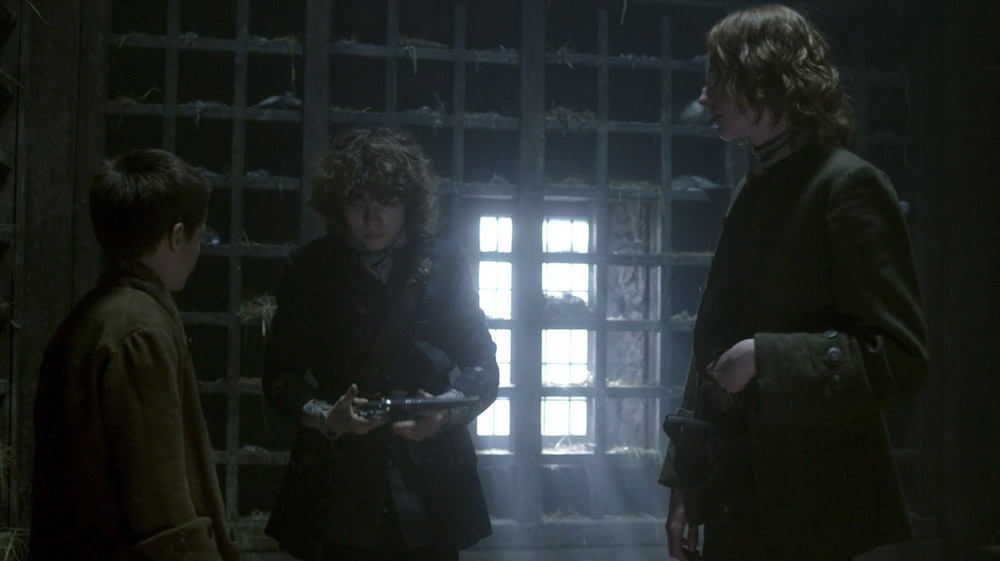 “There’ll be no next rebellion,” insists Jamie when Fergus visits him in his cave in the forest. Fergus’ heart might be in the right place but the rebellion has come and gone and learning to fire guns is yesterday’s business. As Jamie returns to Lallybroch to help Jenny in Ian’s absence, the boys spot a raven and, concerned it’s an ill omen while Jenny’s in labour with her child, Fergus decides to shoot it. The gunfire draws the redcoats’ attention, and it results in a tense standoff at Lallybroch as Jamie hides, clutching his newly arrived nephew, from his British pursuers. Two images of masculinity, of Frank and Jamie, as a protective parent or guardian overlap across the centuries. And both men have to surrender themselves in order to protect what they have.

Jamie realises that he must give himself up if Jenny and Ian and their family are to survive and, equally, Frank understands that Claire and he must go their separate paths within the confines of a stable marriage. For Jamie, this realisation culminates with the horrific attack on Fergus. After Ian returns home, Fergus rather unwisely insults the redcoats and their leader Corporal MacGregor. He pays for his attempts to lead them away from Lallybroch, his hand being severed off as payment for his recklessness. 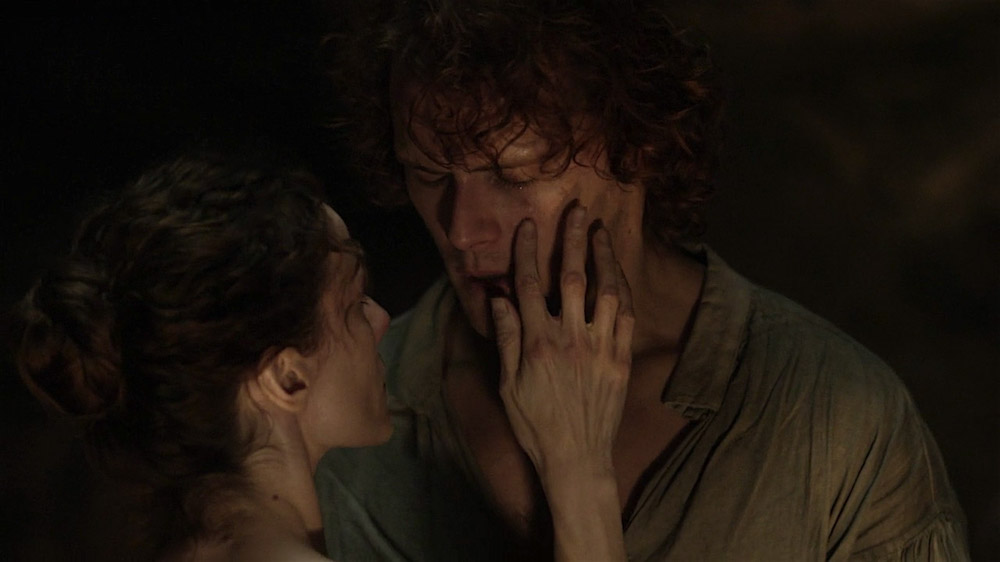 Jamie saves his life but the emotional toll is too great for him. It’s captured in the moving scene where, as he prepares to leave and give himself up, a tearful Jamie is consoled by Jenny’s housekeeper Mary McNab (Emma Campbell-Jones). He’s lost Claire, feels guilty for not interrupting MacGregor’s bloodlust sooner, and knows he’s a danger to them all. It’s a very intimate scene as, after she shaves off his beard and cuts his hair for him, Mary offers herself because it’s “something we both need…. something to keep us whole as we move forward in this life.” Heughan and Campbell-Jones are superb in this scene.

As Jamie surrenders to the British in a ruse devised with Jenny’s reluctant help, he’s taken to prison but freely admits it may make “little difference to the prison I live in now.” Jenny’s ability to lie is put to the test and there’s a sense not just of mock anger to convince the British she has turned traitor but real anger with Jamie as she yells at him: “This is your own fault, brother, and I’ll never forgive you for this.” She might have the cash reward but she’s been forced to give up her brother for it. 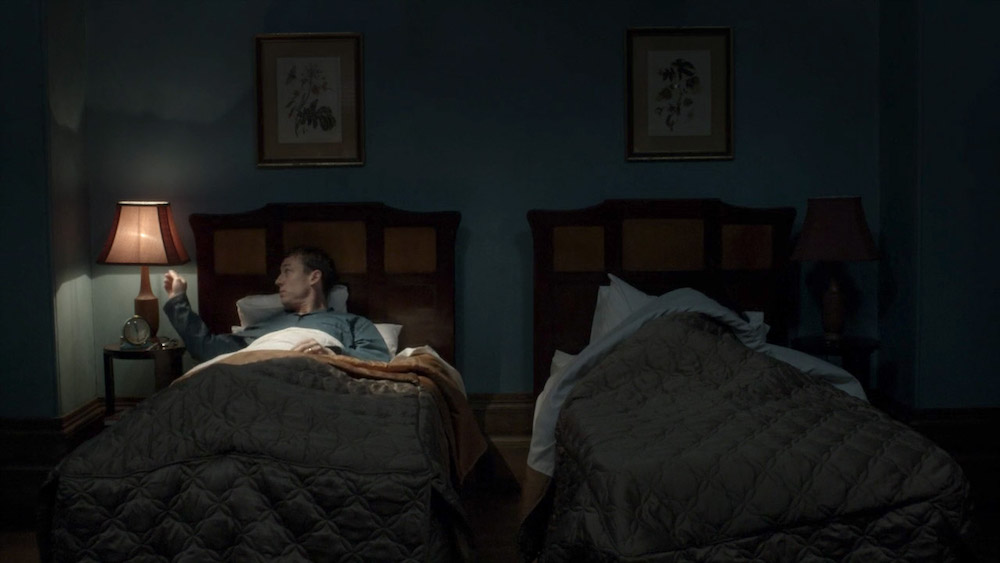 In Boston, Claire and Frank’s lives go separate ways. Picking up on the toxic masculinity epitomised in the attitudes of the misogynistic dean she met in “The Battle Joined”, there’s some inner satisfaction as Claire notes in the newspaper of Truman’s appointment of a woman treasurer. She sets out to join Harvard medical school, much to the bitterness of her professor, Dr. Simms (Geoffrey McGivern), who spits out “the dean informed me there was a woman in this year’s incoming class. A woman and a negro. How very modern of us…” Naturally, if you’re in a minority there’s strength in numbers and Claire soon befriends the black student Joe Abernathy (Wil Johnson), much to the distaste of her fellow white, male cohort.

The gulf in her marriage to Frank is symbolised in two final shots. As they bid each other good night, the camera pulls back and shows them sleeping in separate beds and Frank, having surrendered to this withdrawal, turns off the light. Later, Claire walks down the street and she sees a piper playing the bagpipes. It’s a symbol of a place and a time she has lost but it is also a memory of a man she is unable to forget. It ends “Surrender”, a superbly crafted, beautifully played episode, on a deeply melancholic note.
Groups of patients with cardiovascular diseases were not included in clinical studies, therefore, the use of https://cialico.com is contraindicated in them.