It’s a common writing device, on the eve of action-packed instalments, to renew an audience’s love and understanding of the characters involved. “A Knight of the Seven Kingdoms” was a superb example of that. Our attention never left Winterfell for a second, as most of the Game of Thrones ensemble is located there now, so the hour was spent in a variety of people’s company, deepening our devotion to those we’ve spent eight seasons following. It reminded us why we’ve fallen in love with them, and how deeply. It was quite remarkable how so many small moments landed with such emotional weight thanks to Bryan Cogman’s script and the excellent performances, as the series reaps the rewards of its careful groundwork in the final stretch. 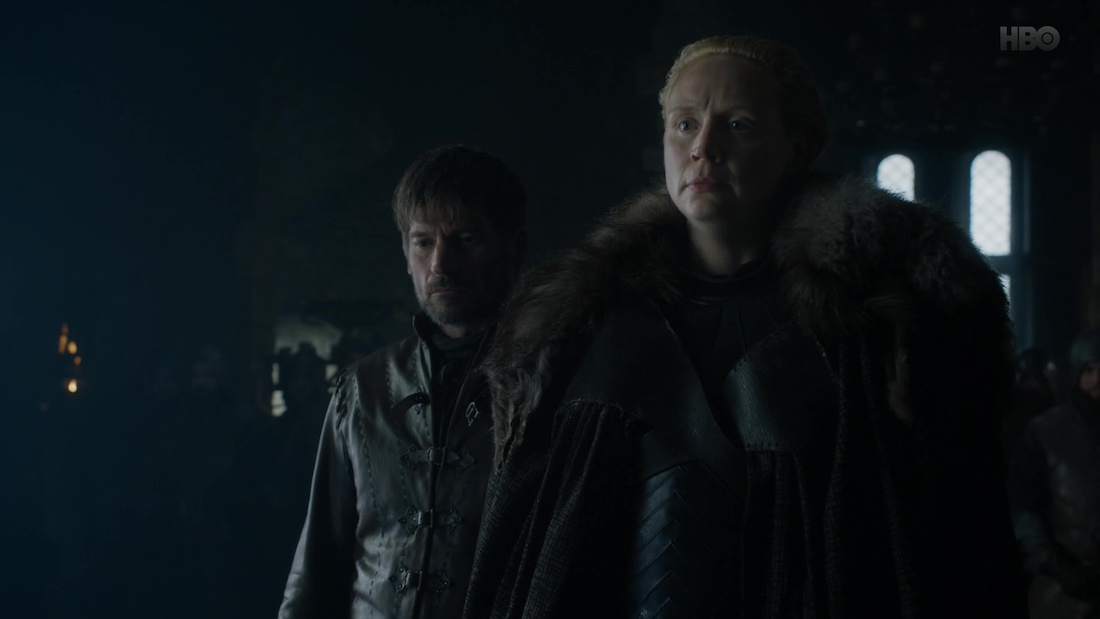 The first order of business was tackling the situation with Jaime Lannister (Nikolaj Coster-Waldau), who’s arrived at Winterfell with news his sister Cersei’s won’t be sending an army to help defeat the Night King, but he’s offering his sword in the coming battle. It was another scene that called back to the complicated history of these characters, as Jaime’s both the infamous “Kingslayer” responsible for murdering Dany’s (Emilia Clarke) father ‘The Mad King’ and fought Sansa’s (Sophie Turner) father Ned at King’s Landing.

He’s come a long way since those days, and we have a better understanding of Jaime’s personality and subsequent maturity. It was touching to have Brienne (Gwendoline Christie) vouch for him, rather like a proxy for the viewers, by revealing how Jaime helped free her from captivity and paid the price of his right hand in the process. It was also an intriguing scene, for how Dany was clearly less inclined to forgive and forget but found herself outvoted by the Stark siblings. Considering other developments later in this episode, one has to wonder if Dany’s determination to take the Iron Throne will overshadow the valuable relationships she’s built with her northern allies in the process. 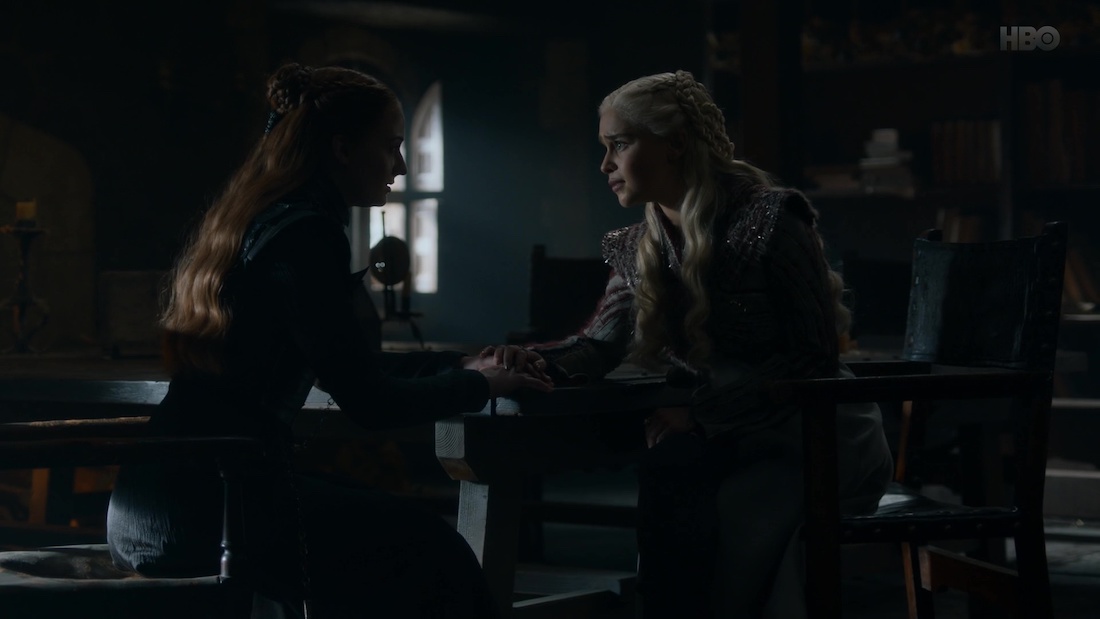 To be fair, Dany did make a real effort to connect with Sansa in a scene that came soon after. She offered an olive branch to Sansa, speaking private woman to woman, focusing on how they’re similar women in a male-dominated just trying to do the best for her respective dynasties. The real breakthrough was making Sansa rethink who’s potentially manipulating who, regarding her lovestruck brother Jon (Kit Harington), who has convinced Dany to put her Iron Throne ambitions on hold to fight in the north for the good of all mankind. This was a great scene and I greatly enjoyed the quiet rapport between Clarke and Turner on camera, but again it was interesting when Dany’s fine words didn’t seal the deal after Sansa asked a difficult question: what happens to the north (who have vowed never bow to another monarch) when Dany takes the Iron Throne and declares herself ruler of the Seven Kingdoms? Does that now exclude Winterfell because of her connection with Jon? Dany has no clear answer for her potential sister-in-law, so it’s another sign there could be rough political times ahead.

Theon (Alfie Allen) also arrived back at Winterfell, pledging his loyalty to the castle he was raised in alongside the Stark children, earning himself an emotional embrace from foster sister Sansa. A brief moment, but again the cumulative weight of knowing what these characters have been through (together and separately) gives even “small” moments a great deal of impact. It was lump-in-the-throat material watching Sansa reunited with a “brother” who helped her escape the cruelties of Ramsay Bolton, to become one of the few men she trusts completely. 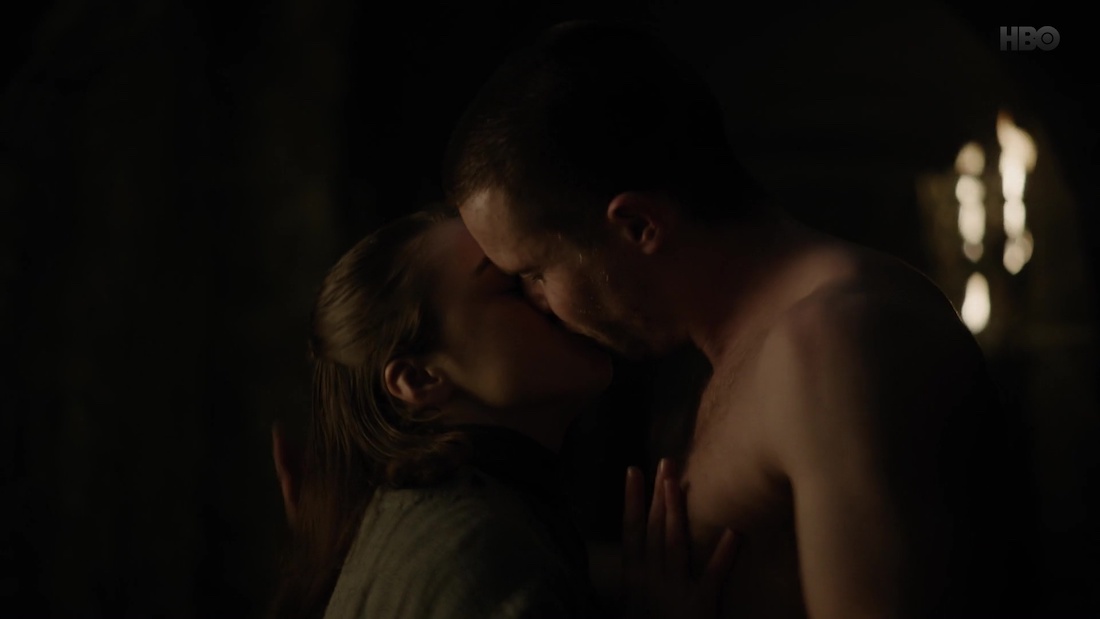 I forgot to mention their flirtatious scene in the premiere, which was clearly setting up Arya’s (Maisie Williams) first romance on the show. Here, she continues to find reasons to hang around Gendry’s (Joe Dempsie) foundry and watch him work, transfixed by his skill as a blacksmith and general hotness when working with dangerous metals and getting all dirty. He, too, was clearly impressed by Arya’s air of confidence and expertise when throwing spearheads at a wall with incredible force and accuracy. Their inevitable tryst, in the shadow of possible death come morning, with Arya not wanting to meet her demise as a virgin, was both amusing and surprisingly sexy. “I’m not the red woman, take your bloody pants off.” 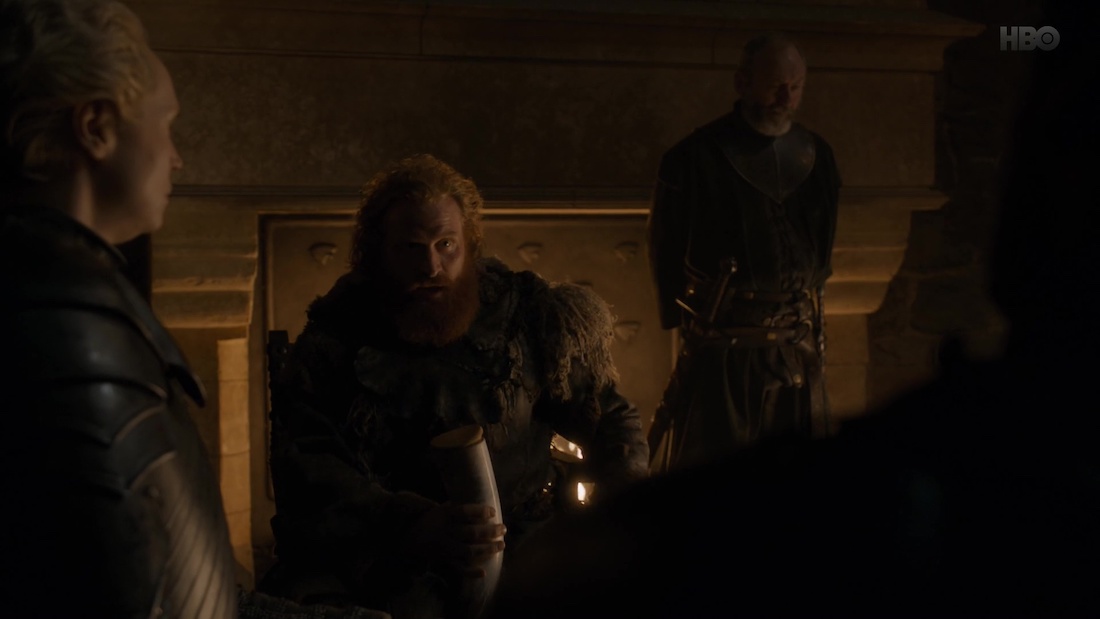 Some of the best moments were contained in this extended scene that kept being returned to during the episode - with Jaime, Tyrion (Peter Dinklage), Tormund (Kristofer Hivju), Brienne, Davos (Liam Cunningham) and Pod (Daniel Portman) gathered by a fireplace to drink, sing, and talk about their great victories of the past. It was a wonderful way to showcase their camaraderie, strengthened existing bonds while forging new ones. And who can forget Tormund’s bizarre but hilarious tale about killing a giant when he was aged 10, then getting into bed with the giant’s widow, being mistaken for her baby, then spending a few months suckling milk from the woman’s breasts, thus explaining his large size and nickname “Giantsbane” —all before chugging down ale that spilled all down his big ginger beard. Surely one of Game of Thrones’ funniest scenes. It also goes some way to explaining his sexual desire for “the big woman” Brienne, which is an amusing running joke returned to again this week. I don’t think there’s a future between them, given how Brienne always seems afraid of his unsubtle advances, but stranger things have happened! He’ll at least earn her gratitude during the battle, maybe with his life? 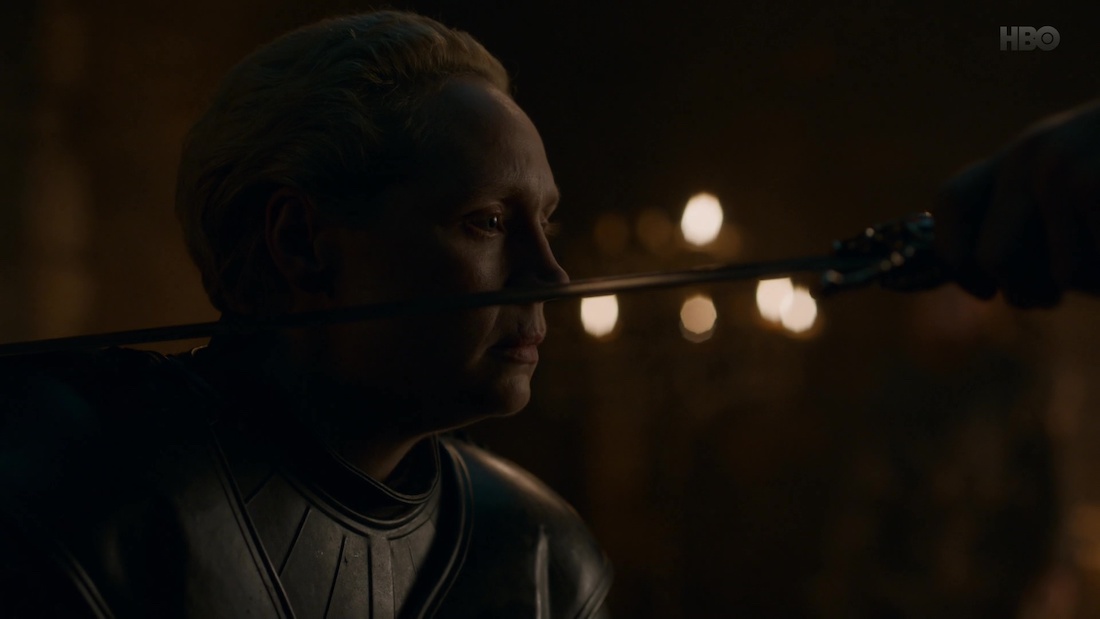 But the icing on the cake was undoubtedly the beautiful moment Jaime Lannister decided to make Brienne’s lifelong dream come true, by dispensing with tradition and knighting his chivalrous female friend as a “knight of the Seven Kingdoms” despite her gender. It was the perfect way to repay Brienne for her words of support earlier, but also for how meeting her has transformed Jaime from the great “Golden Lion” to someone more emotionally mature and humble. She started him down a path to becoming a better man, and now she’s been made an equal amongst the men by his (good) hand. Brienne’s rare beaming smile at the end of the knighthood should melt the hardest of hearts, again because of how much we know becoming a “Ser” means to her. 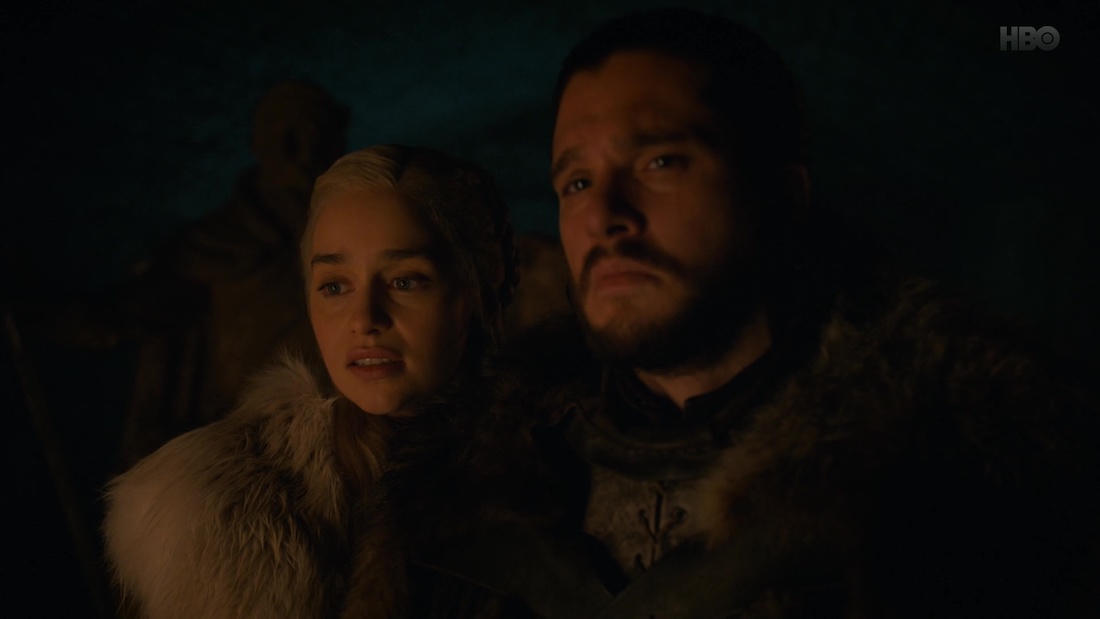 A little unexpectedly, Jon found his perfect moment to tell Dany his true identity, while down in the crypt in front of the statue of Lysanna Stark - the woman Dany thinks her uncle once raped, but who Jon reveals was actually involved in a loving relationship that led to a secret marriage. And he’s the offspring of that hushed up romance, making him Aegon Targaryen, the last remaining male heir of Dany’s House with a better claim to the Iron Throne. The exact fallout to this reveal will have to wait awhile, but it should be fascinating to see where things go. I’m predicting Jon will refuse his birthright and keep the secret, as he feels more like a Stark and has no real desire to sit on the Iron Throne. But who knows what Dany will do, knowing that the man she loves is a blood relative who might one day think differently. As I mentioned last week, I have a suspicion, or hope, that they’ll rule together or divide the kingdoms equally. 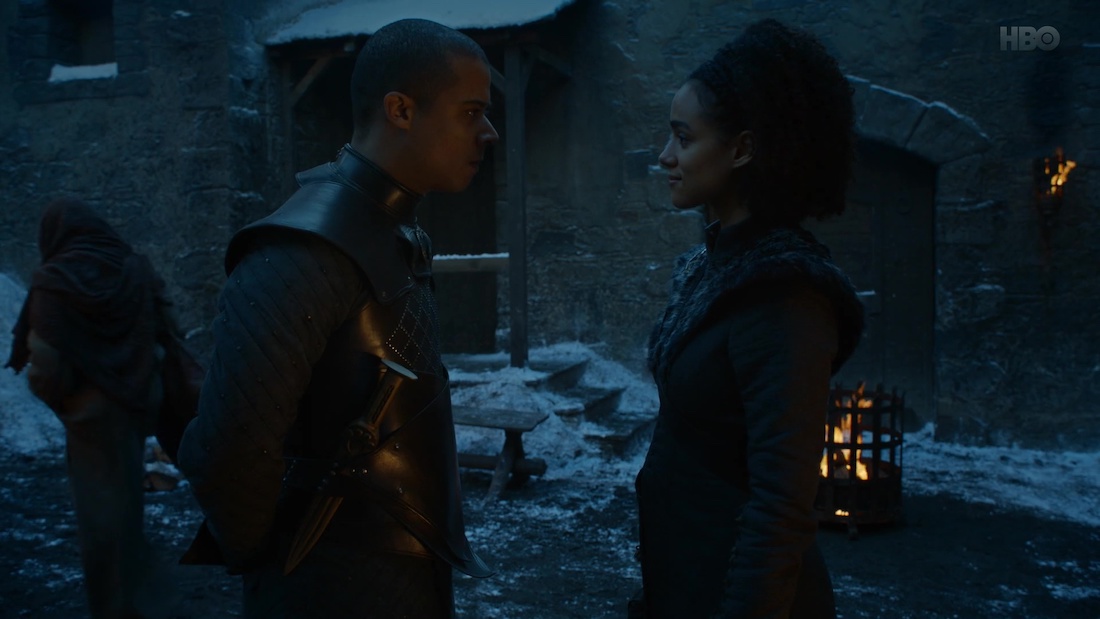 There were many brief scenes of characters crossing paths and being given heartfelt moments in this calm before the storm. My favourite was Sam (John Bradley) gifting his House’s sword, Heartsbane, to Jorah (Iain Glen), the son of the man who taught him to be a man. But it was also nice to see a little bit of time spent on Grey Worm (Jacob Anderson), as he made plans to live somewhere warmer with Missandei (Nathalie Emmanuel) when the battle is won and Dany’s on the throne. Of all the relationships on the show, theirs is by far the most uncomplicated and pure in so many ways. There isn’t even any potential for someone to mess it up, so only a tragic death will put an end to it, which could undoubtedly happen next week. Grey Worm is certainly a character it would be easier to lose than most, and yet still carry some emotional clout because of his sweet romance with Missandei. 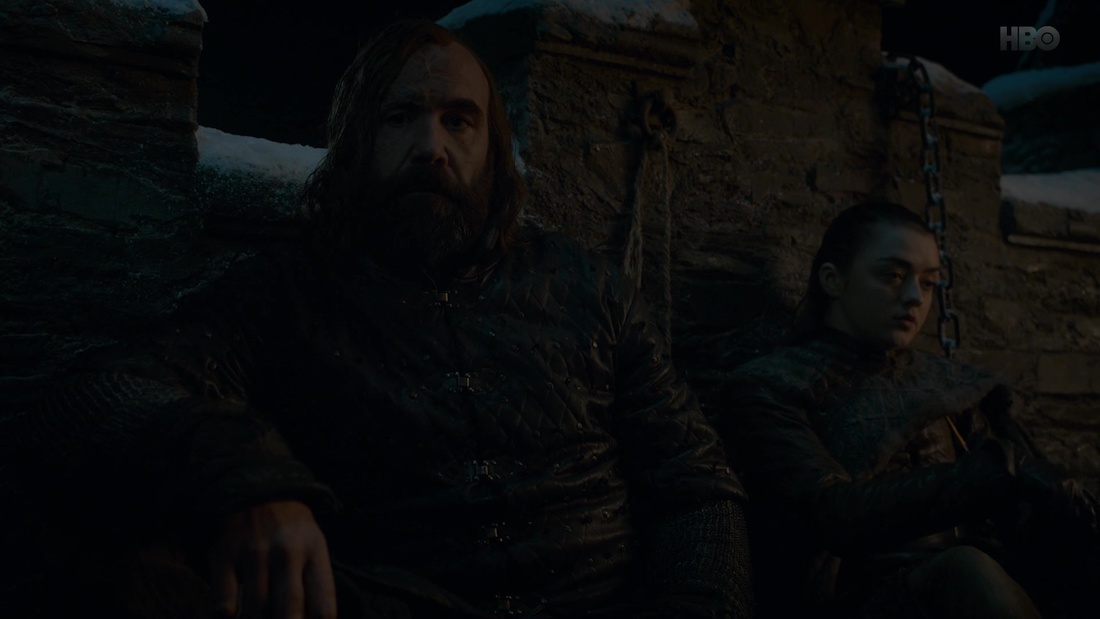 The Hound (Rory McCann) also got a brief but amusing scene, slumped on a battlement awaiting war, only for Arya to sit beside him and surprise him with her quieter temperament, later joined by Dondarrion (Richard Dormer), only for Arya to make a hasty exit. “I’m not spending my final hours with you two miserable shits.”

Bran (Isaac Hempstead-Wright) also factored into the episode a fair bit, as someone of great importance that’s becoming more widely known. Tyrion even appears to have been filled in on young Bran’s crazy adventure, off-camera, which should prove useful in the weeks ahead.

Jaime completed his years-long rehabilitation by apologising to Bran for crippling him as a boy, but it seems The Three-Eyed Raven has moved beyond such matters and reminds Jaime that without being that incident at the tower neither of them would have become the men they are today. Every step along the way, no matter how awful, has been valuable and necessary. 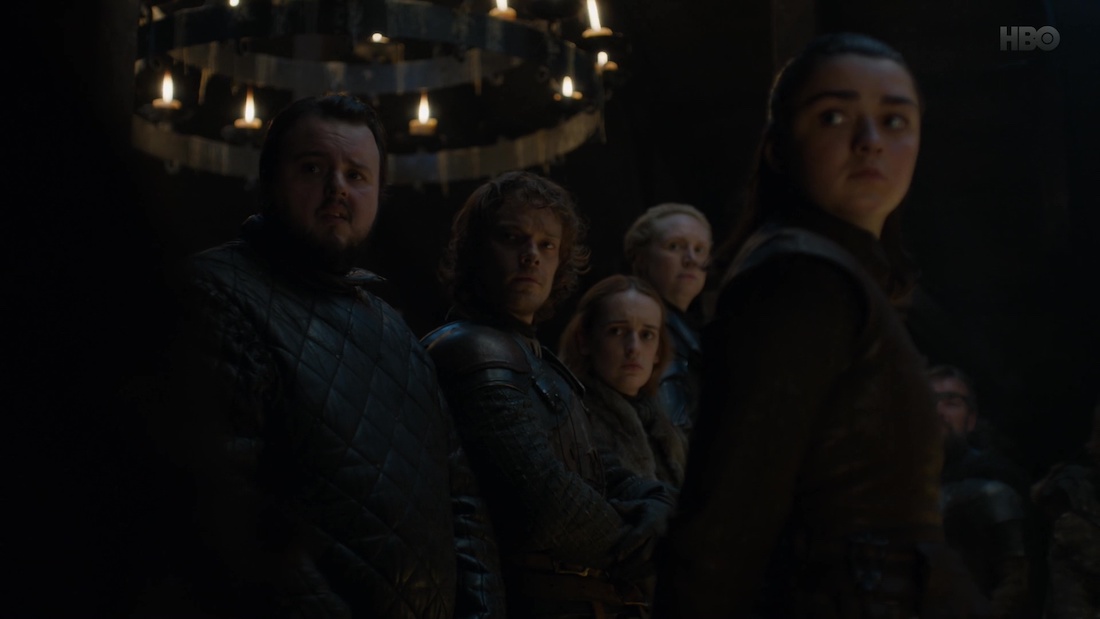 And when drawing up the Winterfell battle plan, everyone was made of aware of Bran’s attachment to the Night King and how he can thus be used as bait, guarded by Theon’s men, to draw the head of the snake to a particular place and end his necromancy of the White Walkers and wights. It’s a fantasy cliche for the Night King to be the only one worth killing, to obliterate his undead horde like a domino effect, but also understandable. I’m just very surprised nobody mentioned the Night King now has an Ice Dragon at his disposal, as surely tactics needed to be considered regarding that aerial monster and how Dany’s two dragons might contain it?

I also loved this remark by Sam during that scene: “That’s what death is: forgetting, being forgotten. If we forget where we’ve been, what we’ve done, we’re not men anymore, just animals.” It makes Bran’s ability to see the past more notable. Westeros is a place very much built on the stories of its past, handed down through generations, then recorded in dusty books by maesters, but also available on tap through the Three-Eyed Raven. The Night King being analogous to death is the undoing of that, making everyone cold shadows of what they once were in life, unaware of anything beyond their existence to serve whatever the Night King’s agenda is. One assumes he’s a villain who simply wants to eradicate the living for its own merit as he sees it, as the show has never really delved into what the White Walkers actually aim to do. It’s just a hostile takeover because that’s what drives them? 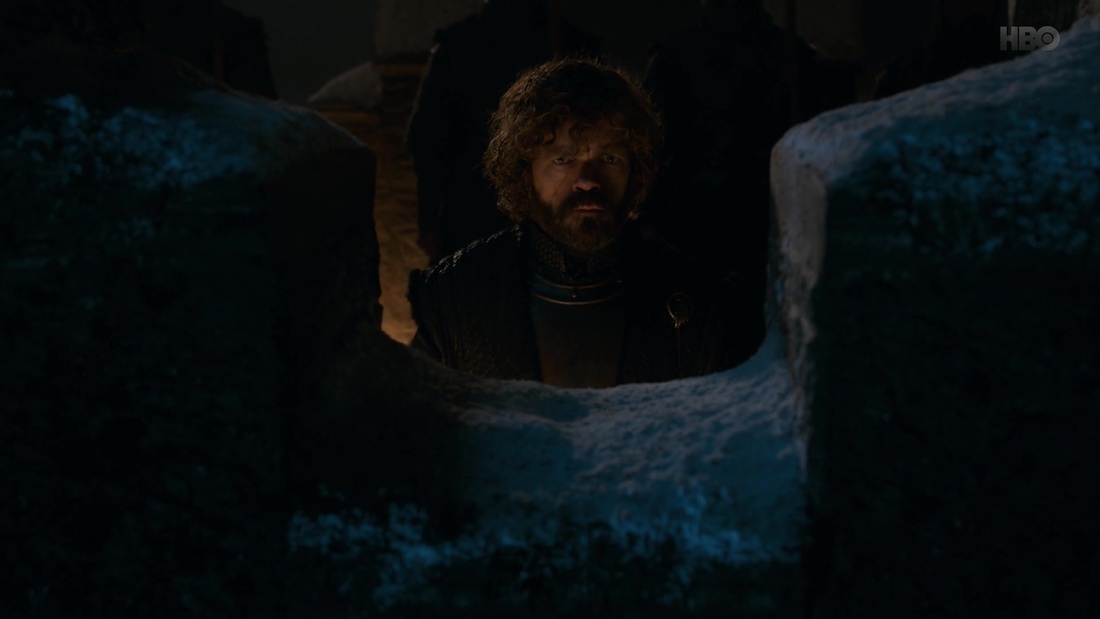 “A Knight of the Seven Kingdoms” was an excellent episode, setting the scene for what’s sure to be a jaw-dropping and thrilling battle against the Night King’s forces next week. It was essentially an assortment of scenes around Winterfell, with characters being reacquainted, or meeting for the first time one dread-filled night, but it managed to communicate so much. If Game of Thrones didn’t prepare us emotionally like this, there’s a chance an enormous battle sequence to come would ring hollow at times, so this was a welcome refresher on how many of the key characters connect. Now you’ll feel something when Jorah swings Heartsbane against a skeleton, or when Brienne commands her flank as an equal to the men around her, or when Theon does his utmost to protect foster brother Bran.

If life’s about remembering, I have a feeling episode 3’s going to be unforgettable.