It’s been a long wait for the third season of Outlander. It was well over 12 months ago that second 2 concluded with “Dragonfly in Amber“. That finale concentrated on Claire Randall’s (Caitriona Balfe) attendance at the wake for Reverend Wakefield in 1968. Accompanied by her daughter Brianna, they discovered the nationalist Gillian Edgars was none other than Geillis Duncan, a “witch” burned at the stake back in 1743, and that the Reverend’s adopted son, Roger Wakefield, was a descendant of the offspring of Geillis and Dougal MacKenzie. With me so far?

Not to worry, because the most important thing we learned was that Claire’s other husband and Brianna’s father, the red-headed highlander Jamie Fraser (Sam Heughan), whom she fell in love with after travelling back in time to 1743 (from her Scottish honeymoon with actual husband Frank Randall in 1943), did not die at the battle of Culloden. If you haven’t seen the previous two seasons then jumping in at this point will not make much sense to you! For those that have endured my reviews over the last few years, let’s press on… 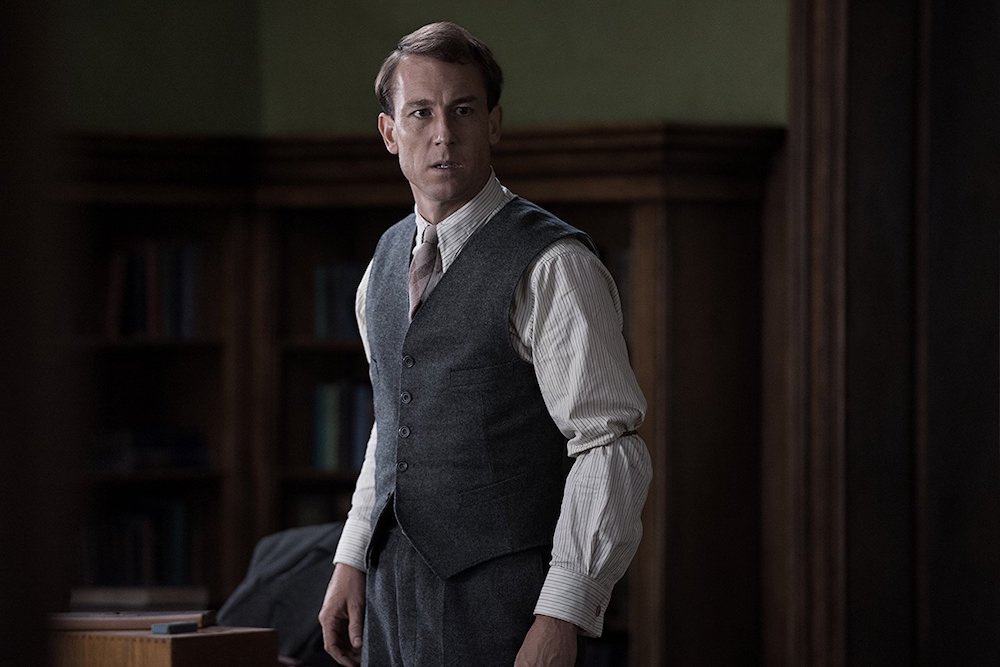 “The Battle Joined” takes up the story and returns us to Boston, 1948. Rather than immediately show Claire returning to the 18th-century for a full blown Mills & Boon reunion with Jamie, the episode elects instead to trace Claire’s life and marriage after she and husband Frank Randall (Tobias Menzies) left Scotland. Claire’s now pregnant with Brianna and is finding the adjustment to a conservative life, among Frank’s narrow-minded Harvard colleagues, something of a strain. The emotional core of the episode, it devotes time to untangling Frank and Claire’s feelings after events in Scotland. Frank has, after all, now agreed to raise Jamie’s unborn child and provide a fresh start in America… but, at the same time, Claire has physically withdrawn from him.

Their marriage, reduced to one of convenience, props up his social standing in academic circles but an outspoken wife, with opinions of her own, will not be tolerated. Claire’s progressive views on politics ruffle the feathers of Frank’s misogynistic boss Dean Jackson (Colin Stinton) and she’s chided by another housewife Millie (Kimberley Nixon) that, rather than challenge the views of the Dean (and correctly predict that Truman will win the election), she should “just look clean, raise the kids, look pretty when they meet the boss.” 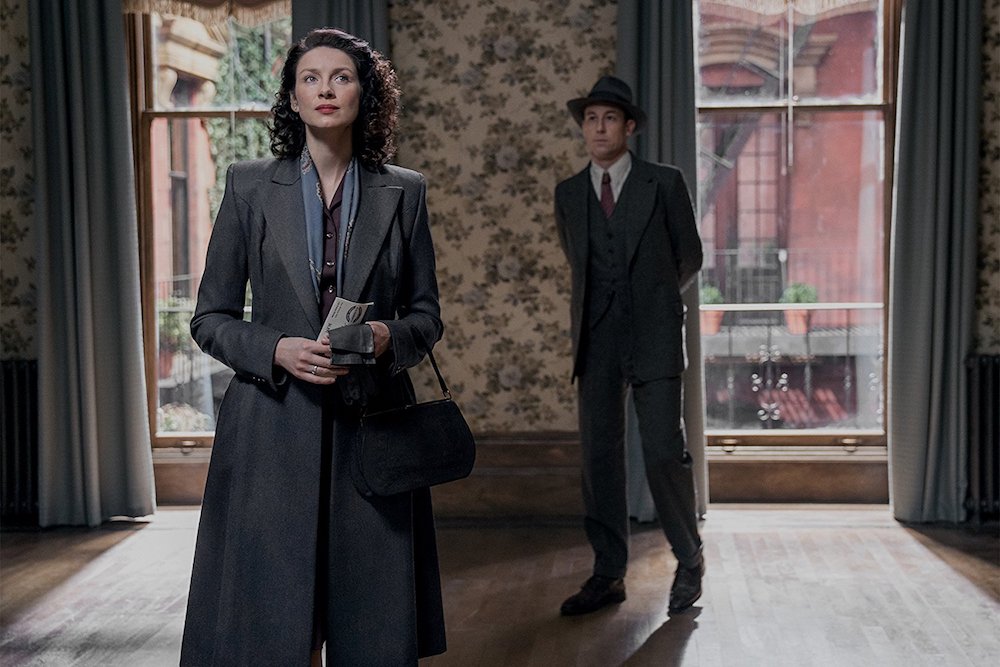 Outlander is reflecting how post-war America sought to re-domesticate women after their invaluable contribution to the workplace during WWII, putting them back into the home where their contesting of gender roles would be drowned out by mass consumerism and the myth of the nuclear family. The home became a place of silence and politics, of empowerment and oppression. It’s in this environment that Claire and Frank also negotiate the rocky road of their own marriage. Balfe and Menzies respond to the material with quiet but eloquent performances.

While Frank rails against the mod-cons of America (including the humble tea-bag), his wife embraces the country’s obsessive desire for the future. She wants to apply for U.S citizenship and clearly wants to put the past behind her, believing that Jamie Fraser and all that he represented is long dead and buried. The past, however, has an unfortunate propensity for barging into the present during this series. Brianna’s conception not only triggers a violent row, but also sends Frank to his desk late at night to write to Reverend Wakefield and ask him to dig into the history of Jamie Fraser, the ghost that haunts this marriage. 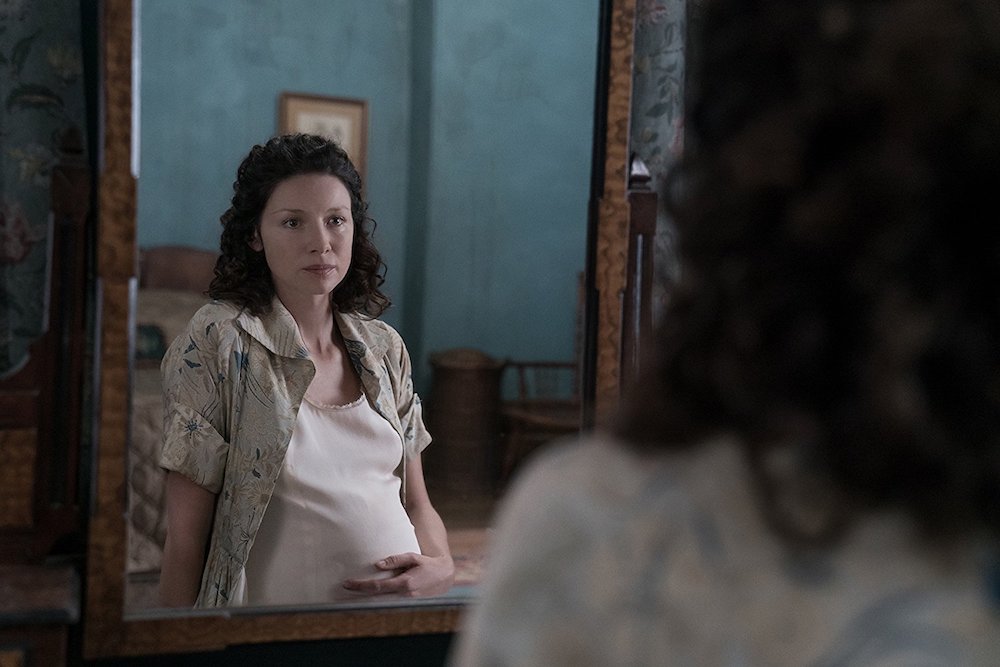 While he may have proposed to an unhappy Claire that she leave Boston, the arrival of Brianna brings about a temporary reconciliation for Frank. Despite the mores of post-war America demanding that the mother will demure to what the medical profession thinks is best for her  (a doctor sedating Claire when she fiercely demands not to be so incapacitated during the birth), Claire knows her own medical history and reveals that she did miscarry, as shown back in season 2’s “Faith”. It’s another shock for Frank, but he’s ordered out of the room as the successful birth of Brianna takes precedence. Poor Frank, always trying to do what’s best and battling to preserve his marriage to Claire, but the past is constantly reminding him that his wife has had an entirely other life where his own ancestor, the thoroughly nasty ‘Black Jack’ Randall, was anything but kind to her and Jamie.

It’s interesting how different iterations of masculinity and honour play throughout “The Battle Joined” and Frank’s domestic dilemma is contrasted with the violent and bloody struggle to survive back in 1746 on the fields of Culloden. That will to survive burns yet in the wounded body of Jamie Fraser. Last year, Culloden was much talked about in the series but never really shown. We saw all the preparations leading up to the day of battle, and some personal scores settled, before Bonnie Prince Charlie (Andrew Gower returns as the buffoonish Stuart wannabe) took his armies into a battle he was destined not to win. Culloden has stalked Jamie Fraser and now he’s in the fray, charging into Redcoat guns and bayonets to seemingly meet his maker. 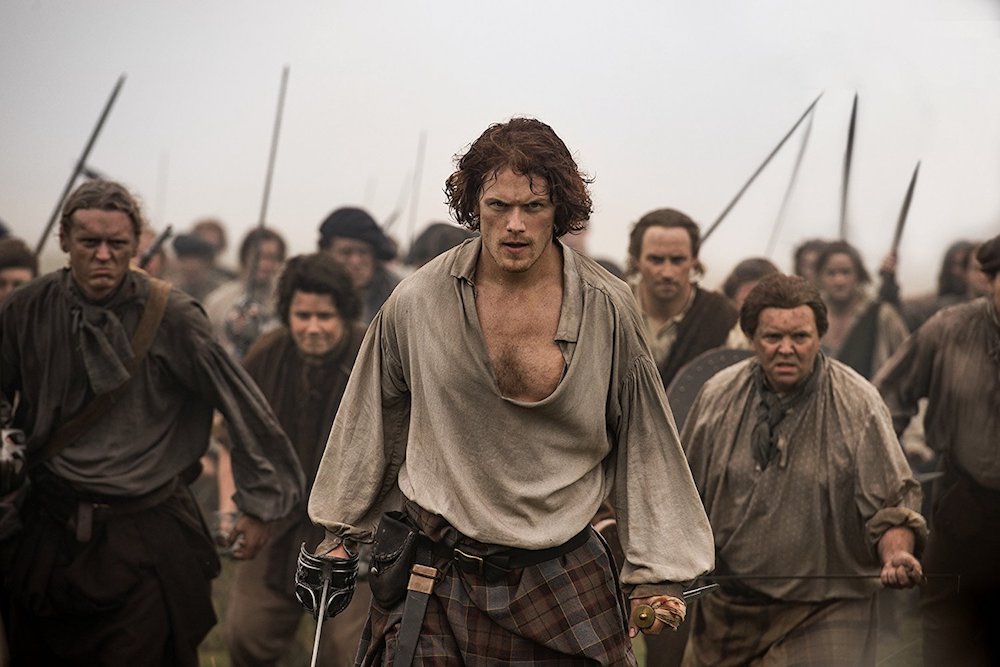 It’s a brilliantly staged vision of utter carnage, but it does tend to reinforce the idea that this was supposedly a fight to preserve the concept of the clan and a fight for Scottish nationalism. It’s a violent but romanticised version of events. The clans were only a small part of a much larger army, and many of the units were from the lowlands, many were Irish and Scottish soldiers under French command and many were English volunteers. Rather than a battle to preserve the clans, or restore the Stuarts to the throne, the Jacobite rebellion was more about opposition to the The Acts of Union, passed by the English and Scottish Parliaments in 1707, which led to the creation of the United Kingdom of Great Britain that same year.

The battle sequences establish not only the nature of Jamie’s survival but also how inconsequential death is in the scheme of things. Wounded and trapped beneath the bodies of Jacobite and Redcoat, Jamie’s mind recalls the battle in a series of brutal vignettes. He’s that dragonfly trapped in amber, the very object that he leaves behind on the field and that finds its way to a museum centuries later. In the aftermath the bayoneting of the wounded Jacobite survivors shows such a callous disregard for life. Significantly, it is Jamie’s final encounter with ‘Black Jack’ Randall (Tobias Menzies) that underscores the episode’s themes. It’s wonderfully shot, almost like a dance of masculine power, and is drenched in golden light as, apparently, director Brendan Maher chose to shoot the sequences at sunset.

It’s this strange sort of dance… I liked the way it’s come out. It’s sort of a strange kind of half dance, half fight, kind of embrace. I feel like it’s a fitting end to this quasi-love affair. 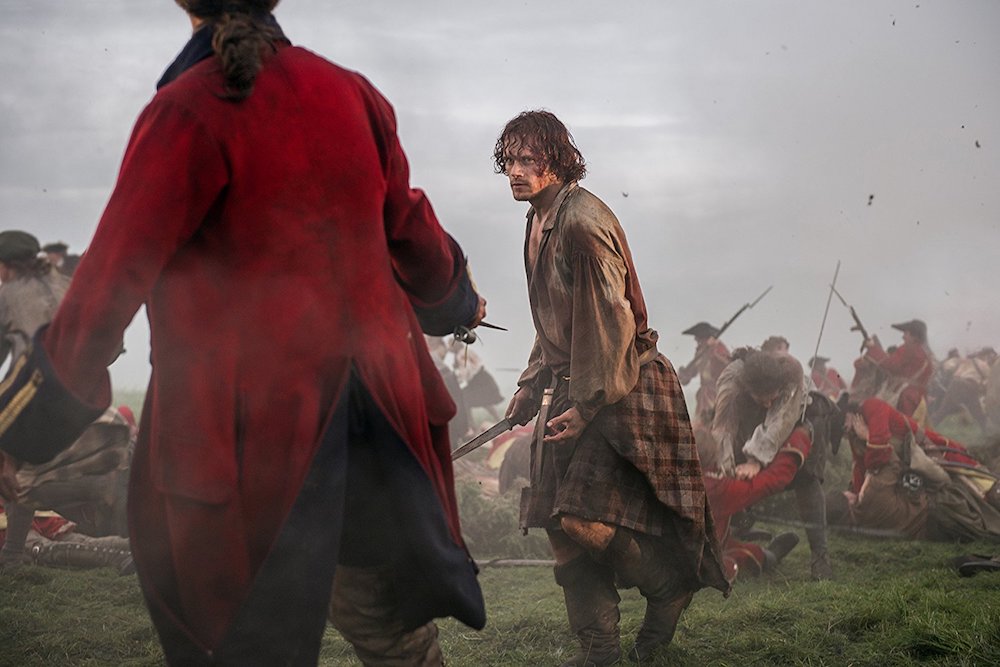 The swift demise of Randall is tinged with further irony as Jamie’s only spared from his own death through the protection afforded by his enemy’s body. It’s a final ghoulish embrace from Randall for the object of his dubious affections and merciless torture. But it does save Jamie’s life and provides an eventual rescue made by Rupert MacKenzie (Grant O’Rourke). Jamie doesn’t see Rupert to begin with, he sees a vision of Claire searching through the bodies before it resolves into Rupert’s arrival. This again suggests the triumph of the bond between Jamie and Claire over all this death and destruction.

Some survivors of Culloden hide in a remote barn and Jamie prepares himself for death. Not only is he badly wounded but the Redcoats have discovered them and slowly call each of them out for execution by firing squad. By some quirk of fate, the squad is commanded by Lord John Grey’s brother. If you wondered why John Grey popped up in the “previously on…” bit at the start of the episode, then it was as a reminder that Jamie spared the 16-year-old Grey’s life in last season’s “Je Suis Prest”. His brother Harold Grey, Earl of Melton (Sam Hoare), now recognises ‘Red Jamie’ and, as an honourable repayment for saving his brother’s life, he allows him to return home to Lallybroch and presumes he will die under the care of his sister Jenny (Laura Donnelly).

By the end of the episode, Jamie’s returned to Lallybroch, barely alive through a debt of honour, and Frank and Claire have a baby girl whose arrival seems to repair some of the cracks in their relationship. While ‘Black Jack’ Randall has been vanquished and his death at Culloden in some way validates Frank’s own sense of honour in bringing up Jamie’s daughter, the past is still affecting the present. When the nurse asks Claire about her baby daughter “how’d she get the red hair?” the joyous mood in the hospital room plummets. That ginger hair is a bold reminder that Claire’s other life continues, and Jamie’s presence can still be felt.

Blood will have blood and what goes around comes around in the drama of Outlander.