Remember how last week I referred to Marsali’s enforced shipboard conference with Claire in Diana Gabaldon’s Outlander novel Voyager? It had seemed like a missed opportunity in “The Doldrums” for the writers of the series to flesh out Marsali’s character and her relationships with the rest of the Fraser clan. Well, like many things in Outlander, the writers often hold moments back and wait for an opportunity to use them as they structure and plan the season. It seems this is the case with “Uncharted”, so I’ll get back to Marsali and Claire in just a moment…

“Uncharted”, like the beach that Claire (Caitriona Balfe) finds herself washed up on, shifts all over the place in terms of its tone. It begins as a castaway narrative with Claire desperately trudging through a sweltering jungle, rapidly dehydrating and battling the elements as well as the hostile wildlife. Pragmatically following “the rule of threes” that determine how “humans can survive three minutes without air, three days without water, and three weeks without food”, she dries her clothes and manages to light a fire with the merest of available resources. However, nature’s not to be trifled with. She falls asleep and wakes the following morning to the not so pleasant sensation of ants swarming over her legs, injecting her with venom. The morning after, she wakes this time in the embrace of a very large snake. 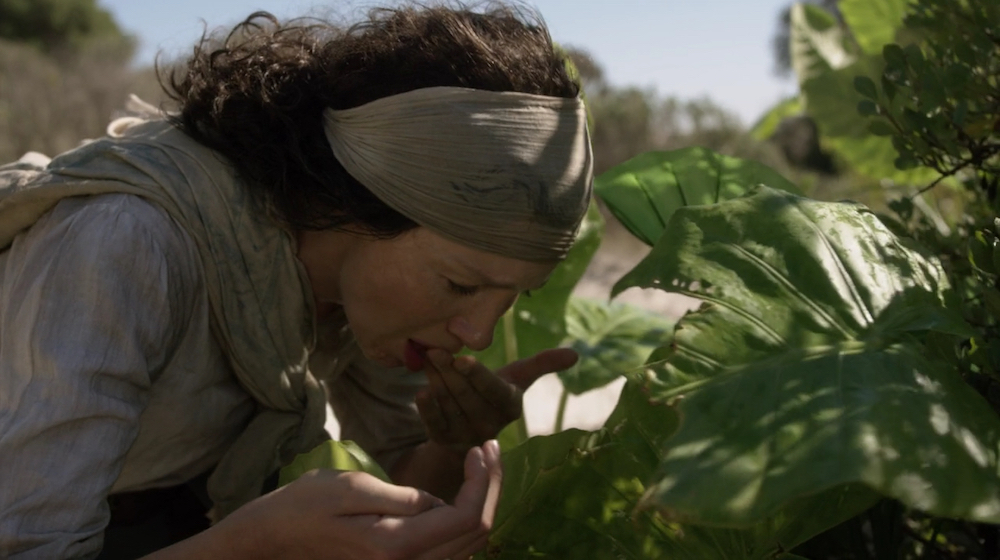 We’re patiently taken through Claire’s ordeal and you’d have been forgiven for thinking that the entire episode’s intention was to exclusively concentrate on this. Balfe proves again she has enough presence to make a leisurely paced first act very engaging, before a second act that feels hastily crammed with plot developments and characters as we hurtle towards the season finale.

Claire emerges battered and exhausted from the jungle heat at the edges of a settlement and abruptly passes out… and things then take a very strange turn. The man she briefly glimpsed before she collapsed is revealed to be a priest, the rather eccentric Father Fogden (Nick Fletcher). To him she’s a portent of good fortune, as one his goats has just produced its first offspring, and a vision of St. Bridget brought to the shores of Saint-Domingue, which was a French colony on the island of Hispaniola in the 18th-century and would later be plunged into a slave rebellion against the French authorities. 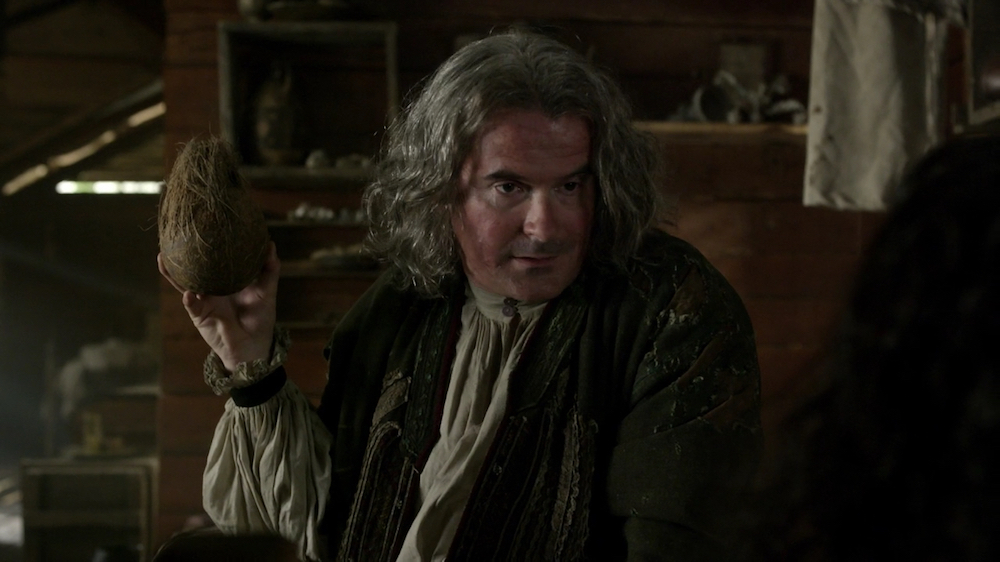 The preacher and his Spanish companion, Mamacita (Vivi Lepori), nurse Claire back to health, but she’s eager to depart and find Jamie. He must be warned that authorities will be waiting for him in Jamaica and he’ll be arrested and hanged if he sets foot there. Fogden consults with Coco for advice. Coco is a coconut. Yes, years of solitude and plentiful pipes of waccy-baccy have clearly skewed the preacher’s view of the world, but Coco’s ‘advice’ is she’s not yet fully recovered to make the journey. But Fogden’s story is rather a sad one and his state of mind was affected by a past tragedy. It’s a tale of forbidden love with a married woman, Ermenegilda, and their flight, together with her mother Mamacita, from Cuba just as the British invaded. Ermenegilda died shortly after Fogden’s arrival on Saint-Domingue.

Mamacita is not altogether happy that Fogden insists on Claire remaining. After an argument, she demands that this “whore” leave immediately. Fogden explains “the agony of losing a daughter holds her still” and she’s concerned that another woman’s presence and love will make him forget all about her precious Ermenegilda. However, Fogden reflects on this and, as Claire can appreciate, he acknowledges that “when you loved someone as much as I loved Ermenegilda, it never leaves you.” In a bid to speed up her departure, Claire decides if you can’t beat them you might as well join them and she talks to Coco, telling Fogden that the coconut ‘agrees’ that she is fit to leave. 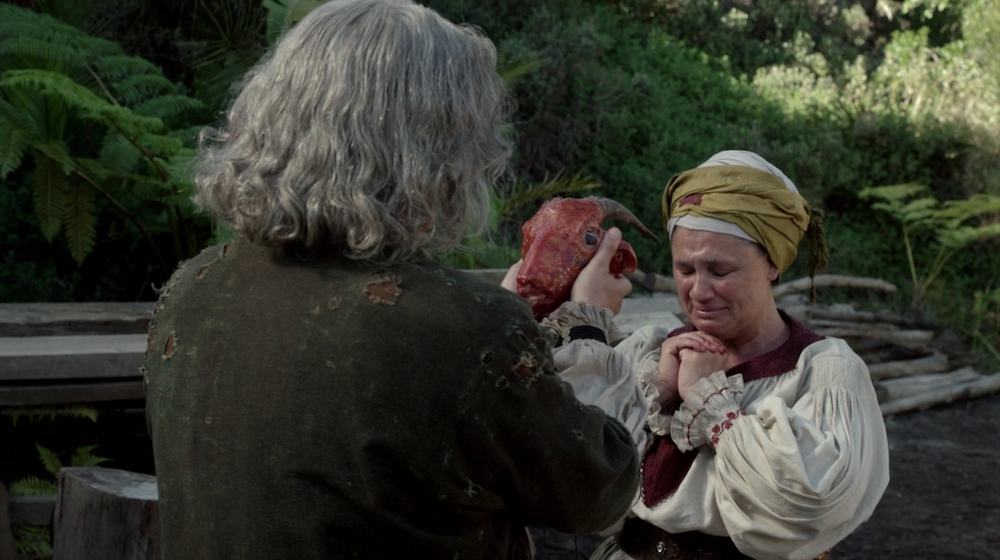 Mamacita interrupts her little deception when she claims a Chinese sailor has kidnapped and eaten Arabella, one of their favourite goats. She plonks the head of the carcass on the table and a jar of flesh-eating beetles is emptied onto it to clean it to the bone. When Fogden offers up an explanation, the flashback briefly to Claire’s meeting with the Edinburgh seer Margaret Campbell in “Crème de Menthe” will reward your vigilance.

When Fogden tells Claire the beetles hail from a sacred cave named Abandawe, Claire recalls Margaret Campbell frothing at the mouth and claiming, “Abandawe will devour you” at their meeting. The cave is allegedly “a place of great power” and “hallowed to the natives of Jamaica.” Ominously, Fogden claims “that folk disappear there.” The cave is probably going to be a portal like the standing stones at Craigh na Dun but viewers may also remember that the bones Claire and Joe Abernathy examined at the hospital back in “Freedom and Whisky”, which were between 150–200 years old, were found — drum roll — in a cave in the Caribbean. Plenty of foreshadowing for what is to come in the remaining episodes. 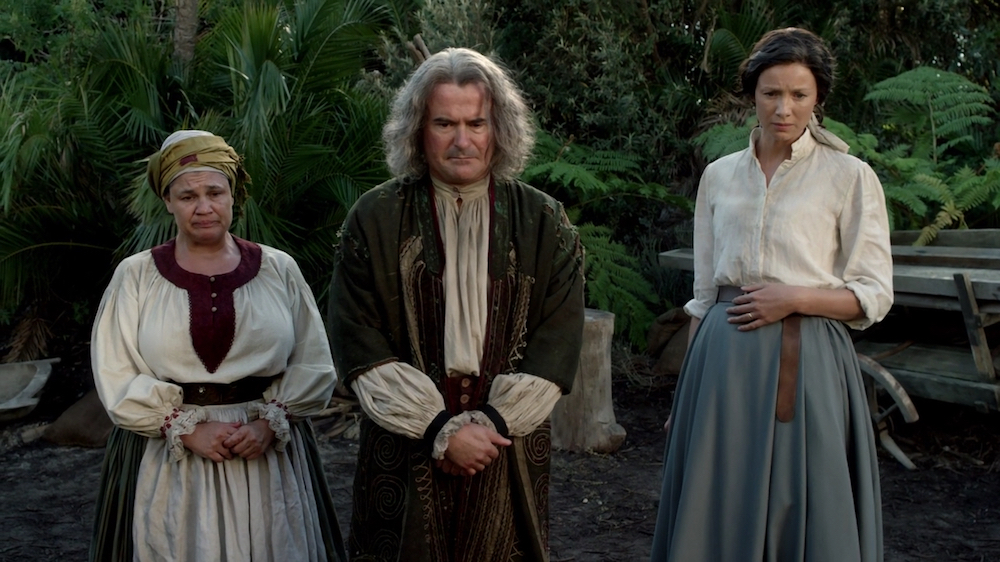 Of immediate concern to Claire is that there may be a familiar Chinese sailor on the island by the name of Willoughby (Gary Young) and, given directions to sailors repairing their sails on the beach, she sets off in the hope of finding them. We eventually learn, while Claire rushes through the jungle and injures her arm on a thorn, that the Artemis was damaged in a storm and Jamie and the survivors are on the beach making repairs. The Artemis is about to depart when Claire finally stumbles onto the deserted beach. Very conveniently she had the foresight to pocket a mirror in Fogden’s house and uses this to signal the ship. Cue yet another reunion as Jamie takes a row boat over to the island and they run into each others arms.

Romantic reunion aside, she manages to warn him about the orders to have him arrested and Jamie is determined that he’ll never be recaptured. To raise their spirits a wedding is proposed after he confirms to Claire that he has given his blessing to Fergus (César Domboy) and Marsali (Lauren Lyle). In a sweet, humorous scene, Mr. Willoughby is made to apologise to Fogden and Mamacita for eating Arabella and Fogden agrees to oversee the modest marriage ceremony. 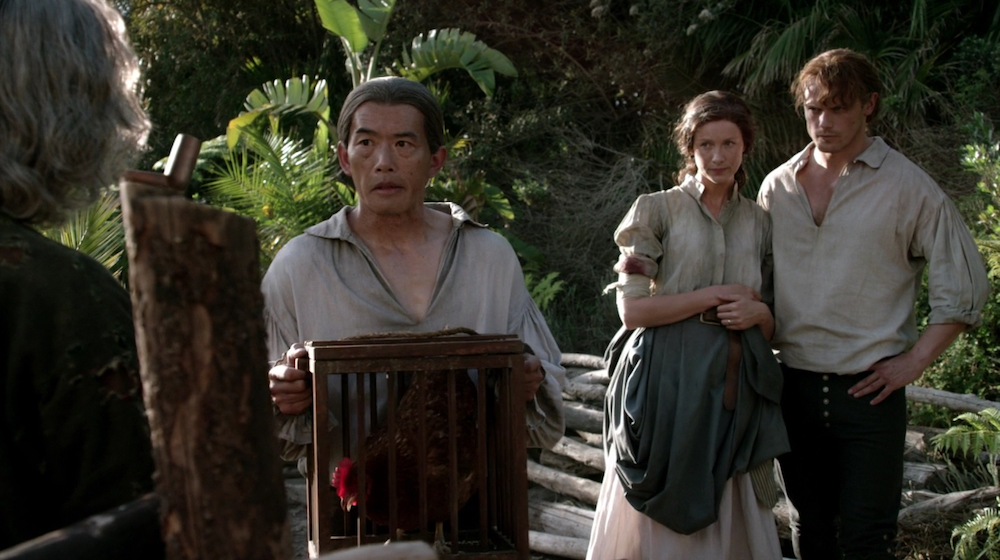 It’s here that we finally get some of that bridge-building between Claire and Marsali and it’s heartening to see that, for all her icy assuredness, Marsali is willing to seek advice from her about family planning. With Claire’s promise to advise her after the blessing of the marriage, Marsali sees her in a somewhat different light and, in her humility, cites Claire and Jamie’s relationship as the one she and Fergus aspire to. Hopefully, without all the time-travel and temporary separations.

There are some nice touches in the ceremony, particularly when Jamie insists that Fergus’ full name is Fergus Claudel Fraser and thus officially adopts him into the family as his foster son. Fogden also blesses Claire and Jamie before they set off back to the Artemis for the voyage to Jamaica.

As the episode draws to a close, there’s an acknowledgement to a fan-pleasing scene in Voyager. In it, Claire’s arm was actually injured by a pirate’s cutlass during an attack on the Artemis that’s omitted by the episode, but similarly Jamie administers a shot of penicillin to kill the infection in the wound. Here, Claire gets drunk on Mr. Willoughby’s sherry soaked turtle soup (prepared by the ship’s cook Murphy in the book). Her claims it’s an aphrodisiac mean that, naturally, it’s not long before she and Jamie get the hots for each other. Willoughby, checking to see if his soup has met with her approval, exits discreetly as Outlander offers some respite before the next storm blows in. 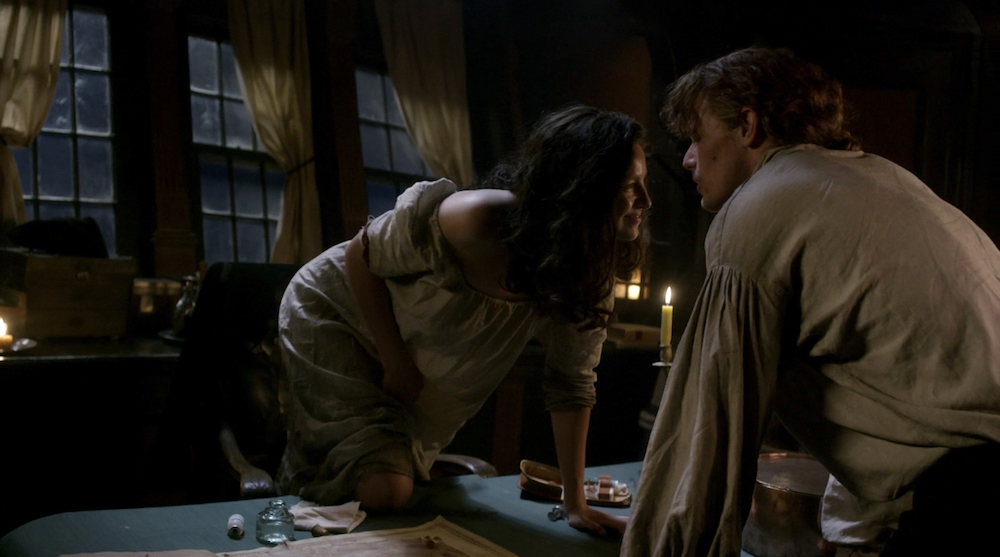