With “Freedom and Whisky”, the fifth episode of this season of Outlander, the narrative viewpoint shifts back to Claire (Caitriona Balfe) and her daughter Brianna (Sophie Skelton). It’s a long overdue examination of the aftermath of Frank’s death and Claire’s revelations to Brianna about her real father, Jamie Fraser (Sam Heughan). It gives us an opportunity to see how Brianna, in particular, has processed everything that’s happened since their return from Scotland, and the aborted attempt to trace Jamie’s survival after Culloden.

Both women are affected in different ways, and we see Claire pouring her disappointment into work as a surgeon while Brianna struggles with her studies at Harvard. Claire’s friend and colleague Joe Abernathy (Wil Johnson), whom she’s known since they were students at medical school, can sense she’s being driven by her demons. Commenting on this, Joe manages to drag something of the truth out of Claire about her return from Scotland, the man from her past who’s “as Scottish as they come”, and their fateful parting of the ways. 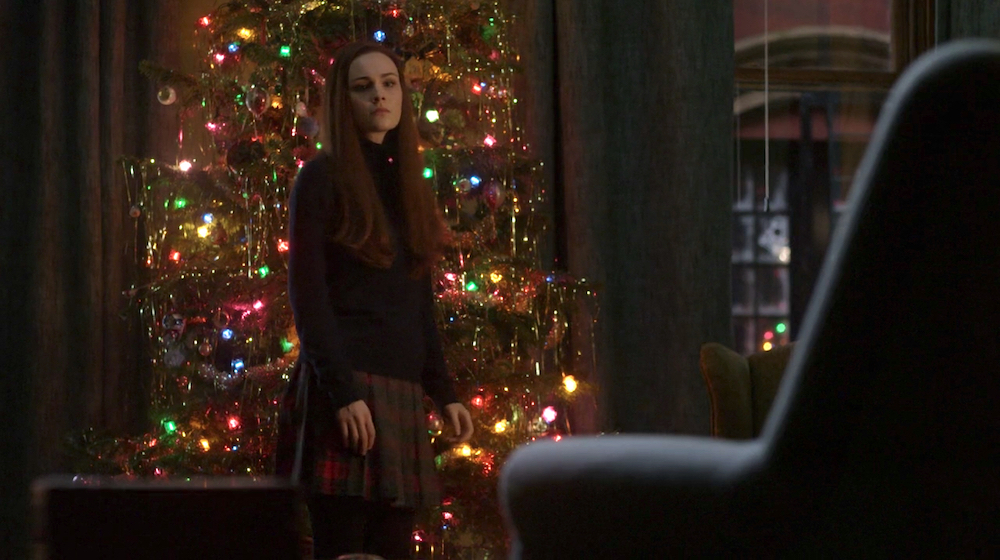 Brianna is distracted during her lessons, only perking up when her tutor Professor Brown (Douglas Reith) expounds on how history’s often created through those lost to it, and whose stories are often hijacked by those who may have “had a better publicist.” Perhaps she can see something of Jamie’s hidden history in that description, and certainly it foreshadows Roger’s (Richard Rankin) imminent arrival with a clue to the past and how the printed word changes the perception of one particular man’s history.

However, Brianna’s faced with the realities of her poor grades at Harvard and that she could be thrown out if she doesn’t pull her socks up. She’s trying to deal with her questions about Jamie and the hidden aspects of Claire’s marriage to Frank. Frank’s influence has given her a ticket to Harvard, but now that she knows about Jamie and Claire, the past has become a foreign country to her. She tries to find reassurance in the old, familiar things: a Christmas bauble, Frank’s pipe, his favourite armchair, and faded photographs. They all confirm that Frank truly loved his daughter. Sophie Skelton’s quiet performance during this scene is very effective and moving. 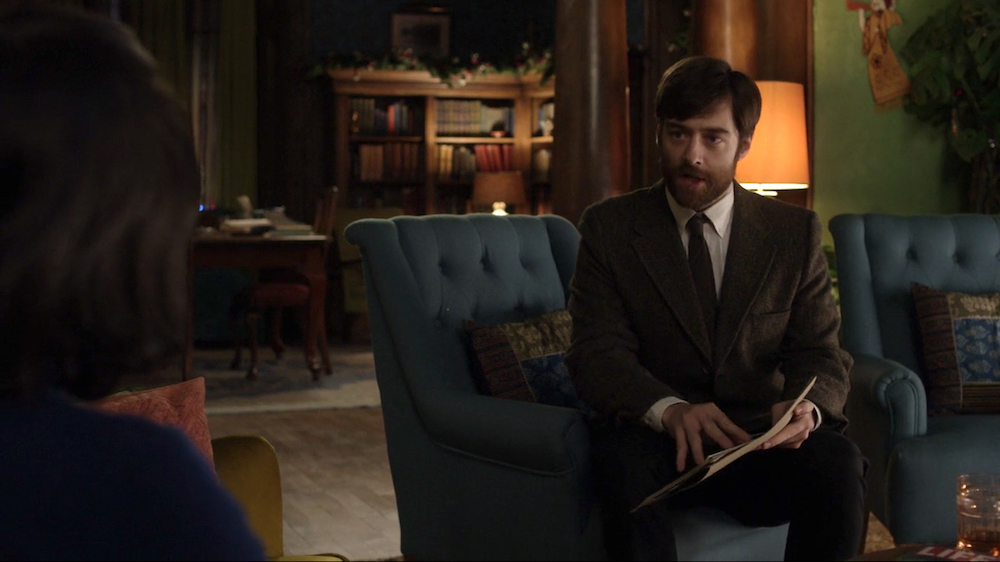 Only Roger’s sudden appearance dispels the gloom and the mother-daughter arguments. Arriving unannounced in the middle of a row about Brianna’s decision to quit Harvard, he’s made very aware that Brianna wants to break with the past. Claire’s not really listening and “expects me to come back to Boston and be who I was.” Roger empathises and admits to Claire that there’s nothing for him back in Inverness after the death of his father, nothing but “books and dust.” He’s in Boston to reconnect with Brianna and Claire and try an American Christmas. There is, again, lots of talk of Christmases past; of reading A Christmas Carol to Brianna when she was little, of Roger singing carols with the family and eating plum pudding. Christmas is always an emotional rollercoaster and Roger couldn’t have picked a better time to drop his bombshell.

He has news that will make these painful separations from the past even more difficult, because they offer a promise of Claire’s reunion with Jamie. Through his tenacious researches, he’s found an article from 1765 that paraphrases Robert Burns 1786 poem, a satire on the government’s taxation of whisky, “The Author’s Earnest Cry and Prayer”. Claire introduced Jamie to Burns’ immortal line “Freedom an’ whisky gang thegither” long before the poem was written (when Burns was only six-years-old) and the article also quotes another line from it. Roger’s convinced Jamie wrote it under his middle names of Alexander Malcolm, in Edinburgh, a year ago in their parallel timelines. 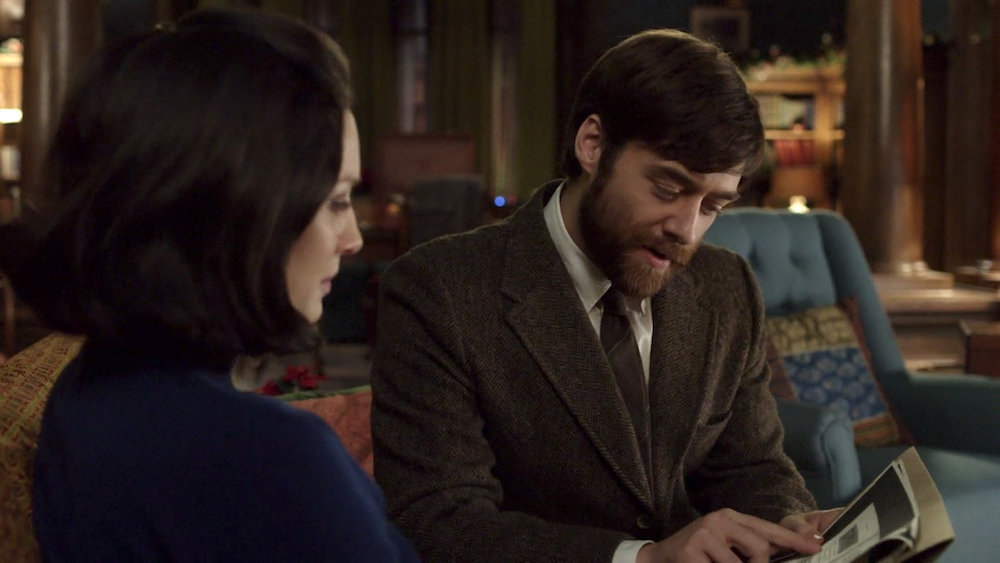 While this means that Jamie’s probably alive and well in Edinburgh, and that Claire can go back and join him, she’s initially distraught and emotionally torn by this possibility. She thought the past was long dead and is more worried about Brianna’s future than the uncertainties of the past. “I could have lived the rest of my life not knowing,” she ventures at Roger’s news, and asks him not to tell Brianna about what he’s found. Claire reasons that her daughter’s still dealing with what she’s learned in Scotland, and now isn’t the right time to be gallivanting off into the past.

Keen Outlander viewers should take note of the scene that follows, as this is more foreshadowing and offers us clues to the fate of a character whose story we’d long assumed was concluded. Joe Abernathy examines the bones of a woman after they’ve been sent to him by an archaeologist for a second opinion. Claire picks up the skull and, behaving and reacting oddly, states that these are the remains of a 150-year-old murder victim. Found in a cave in the Caribbean with a number of other artefacts, Joe confirms that Claire’s assessment was correct and that someone tried to sever the victim’s head off. How did Claire know? Even though the bones indicate a slave burial, Joe also claims the woman was “no slave, she wasn’t black. This lady was white.” File this one for future reference, loyal viewers… 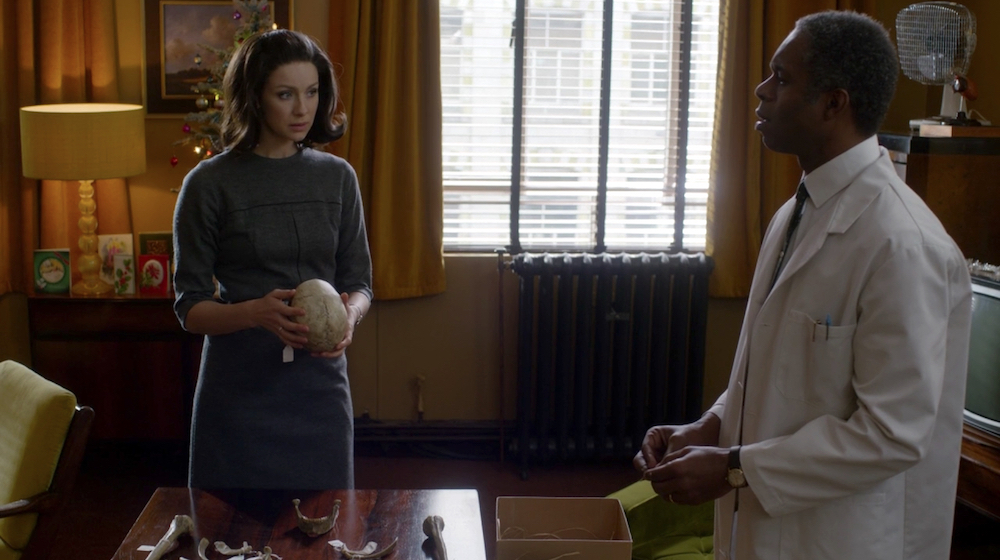 Joe abruptly changes the subject and Claire reveals that the man from her past was Brianna’s father. He’s not altogether surprised, having keenly observed that the Randall marriage was hardly “Ozzie and Harriet.” If there’s a second chance for love, he argues she should take it and that anything’s better than living a half life. Rather wonderfully, the episode then cuts to a clip of ABC’s Gothic soap Dark Shadows. Serendipitously, I’ve been watching that series and recently saw the episode Roger is watching. It’s a sweet bit of metatexual referencing to Dark Shadows’ own melodrama of doomed love, and its penchant for having characters travel back and forth into the past.

To emphasise the Gothic subtext, and its way of illustrating the boundaries between the past and the present, Brianna takes Roger on a tour of the Gothic revival Robinson Halls at Harvard. When she appreciates the building for its precise architecture rather than its history, Roger points out she doesn’t sound like the daughter of an historian. “Well, I’m not, am I? I’m the daughter of an 18th-century Highlander,” she replies. Touché, Brianna. However, he believes knowing his own father helped Roger come to understand himself. “Everybody needs a history,” he concludes. Referring back to her tutor’s lesson on the writing of history she worries that personal history may not be completely true, that some of it may be fabricated to “make us feel better.” History is just a story, it changes depending on who the author is and, according to Brianna, it can’t be trusted. 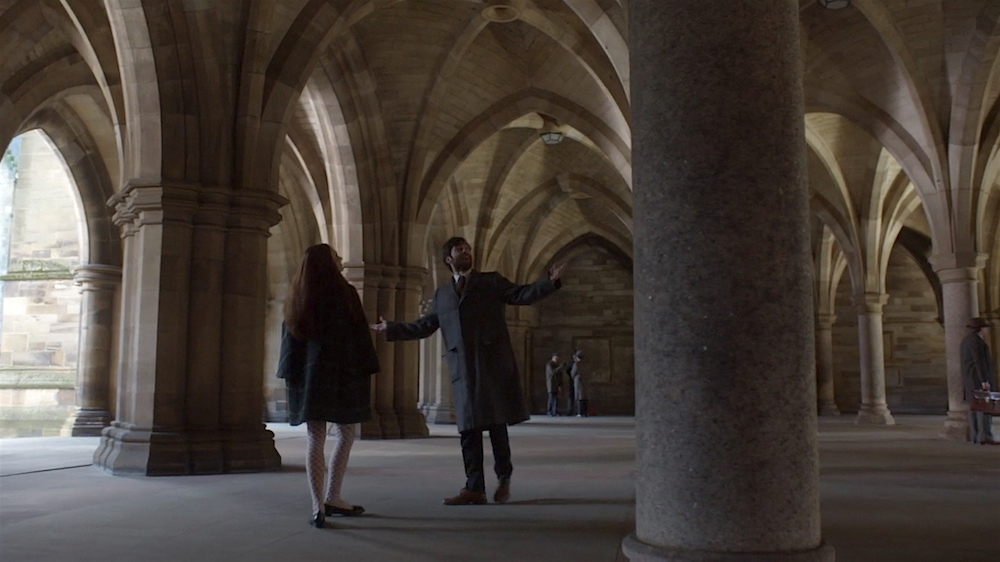 Claire is assailed from two directions. At the launching of a fellowship in Frank’s name, she once again meets Frank’s lover Professor Sandy Travers (Sarah MacRae). Travers bitterly berates Claire about her selfishness in preventing Frank from divorcing and moving on to marry her. “He was the love of my life and I wanted him. Even if it meant I had to share him with you. I could have made him happy,” she tearfully confesses during their uncomfortable exchange. Brianna also recognises Travers at the ceremony and forces Claire to own up about Frank’s affair. Brianna considers how difficult it must have been for Frank to look at his daughter and be reminded of Claire’s other husband Jamie, “The man you really loved.” Claire reassures her that Frank didn’t hate her and bringing her up was “his greatest joy”, and her only regret was having to leave Jamie behind. She loves Brianna for who she is and not for who her father was.

It’s here, in those hallowed Robinson halls and within their Gothic vaults that truth is revealed. Architecture and history, seen as separate perspectives earlier in the episode, are irrevocably fused together. Claire tells Brianna that Roger has tracked Jamie down to Edinburgh. Brianna gives her blessing to Claire to return to him because she’s “all grown up. I can live on my own.” She isn’t dependent on Claire now and the heartbreaking thing is that Claire knows this and finally concedes that her daughter is an adult who can look after herself and make her own decisions. 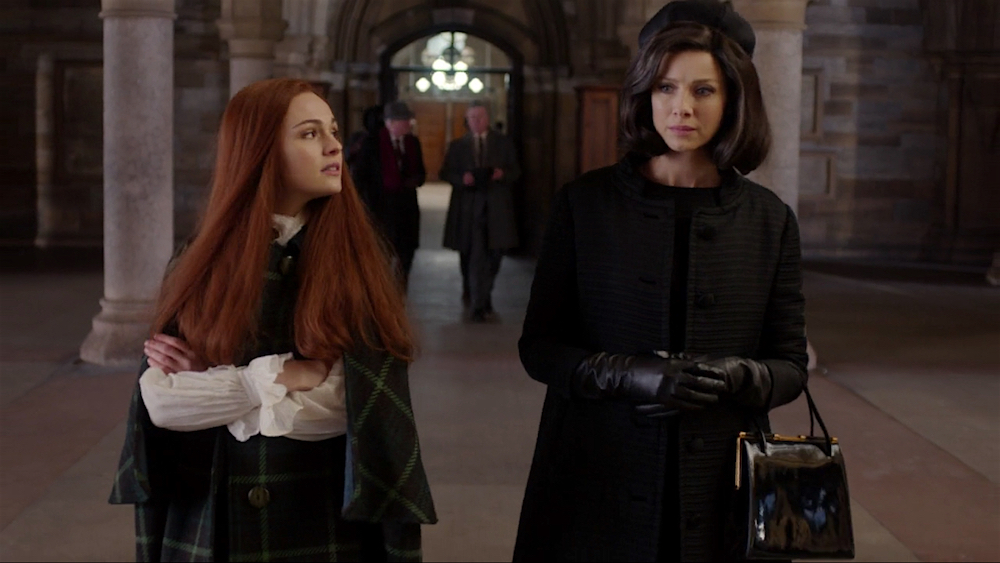 Watching the Apollo 8 mission on television, Joe wonders “how do you take a trip like that and come back to life as you knew it?” as Claire ponders on her own life changing journey into the past and the fears and longings that her forthcoming return to the 18th century are about to bring. She responds in voice over to Joe and simultaneously makes her mind up: “And the answer was, yes, you can come back to your life but it’s never the same.” Her brief, final look around the hospital room crowded with colleagues signals that she’s about to go back on that journey.

Claire warns Brianna that she may never be able to come back and to see her daughter married, or hold her first grandchild. However, Brianna assures her that she’ll be fine because, rather than the legacy of either of her fathers, she has her mother’s strength. Claire owes it to them both to go and find Jamie and “tell him everything.” However, she frets that Jamie will have forgotten her and may have moved on. Now it’s Brianna who has to reassure her that she must trust that her own feelings for Jamie will be reciprocated. 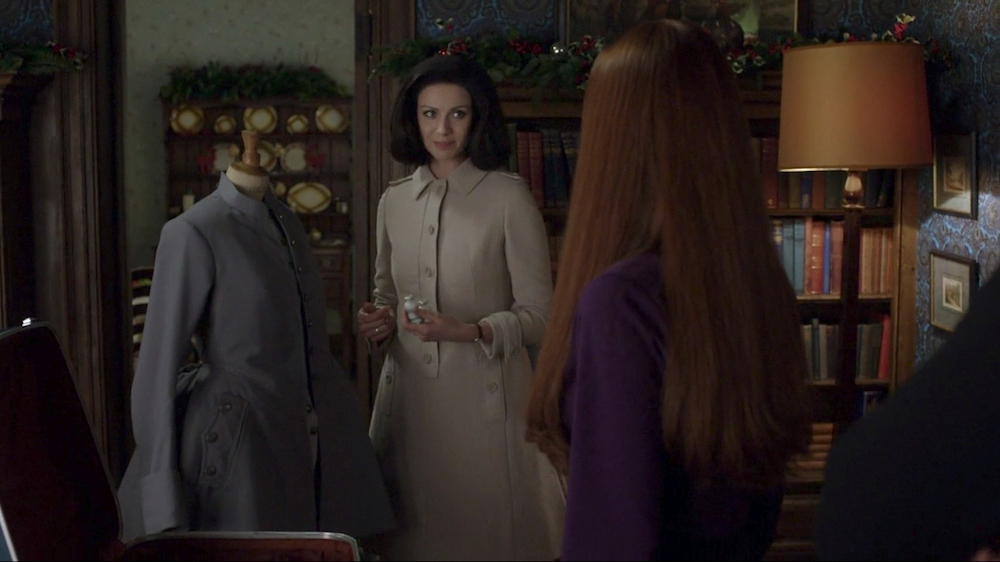 After the traditional giving of gifts over Christmas — including useful currency, a history book on Scotland, some borrowed scalpels, and penicillin for that package tour to 18th-century Edinburgh — Claire begins her preparations to leave. With a rather ridiculous, slightly too on-the-nose blast of the classic theme to the Batman TV series, it’s sewing machine at the ready to run up a nifty costume with lots of secret pockets in. Or, as Roger calls it, a caped crusader’s utility belt. After a dash of Miss Clairol to touch up the grey hairs, Claire also asks Brianna to hand her resignation to Joe Abernathy.

It seems we’ll never get to the reunion with Jamie with an episode that tends to spend rather too much time raking over and over the emotional coals, and focusing on Claire’s constant hand-wringing. There’s then another sad farewell to Brianna, handing over the deeds of the house, a last gift of the pearls that were bequeathed to her by Jamie’s mother, and one final toast to “freedom and whisky”. After Claire’s departure, Brianna serves lobster rolls and Boston cream pie and Roger gifts Brianna a copy of A Christmas Carol. I’m sure I could hear Outlander’s collective fandom yelling ‘get on with it!’ at the screen.

And the next minute, Claire’s stepping down from her taxi cab and we jump cut to her alighting from a carriage in Edinburgh in 1766. She’s through the door of Alexander Malcolm’s printing house sooner than you can say “Freedom an’ whisky gang thegither”, to see Jamie Fraser fainting on his arse at the mere sight of her. 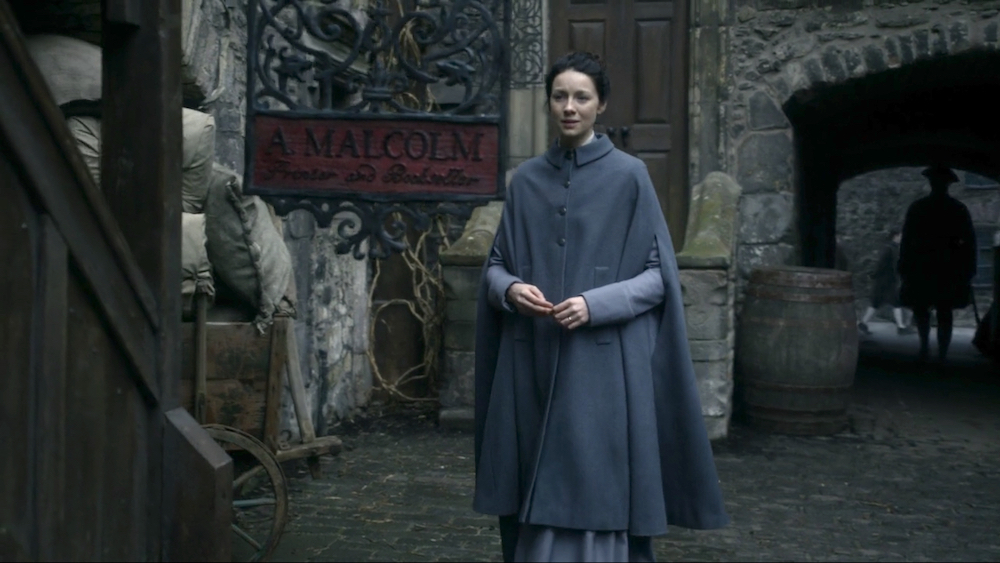