When I first saw Luc Besson’s The Fifth Element (1997) it felt like a glimpse of 21st-century blockbuster cinema. On a technical level, I was proven right. Star Wars Episode I: The Phantom Menace (1999) followed two years later, establishing the kind of ‘event movies’ that have since become commonplace. I also thought Fifth Element was to be the vanguard of a new wave of Euro-flavoured space operas, steering us away from Hollywood’s grip on that genre. That prediction proved inaccurate…

Despite the divisive $90 million Fifth Element receiving mostly positive reviews and grossing $263 million worldwide, Besson moved onto writing and producing action movies like The Transporter and Taken sagas. You probably don’t even know he’s also been making sequels to the Arthur and the Invisibles (2006). His last significant Hollywood project was Lucy (2014) with Scarlet Johansson, so the only thing The Fifth Element directly led to was… well, Valerian and the City of a Thousand Planets. 20 years later. 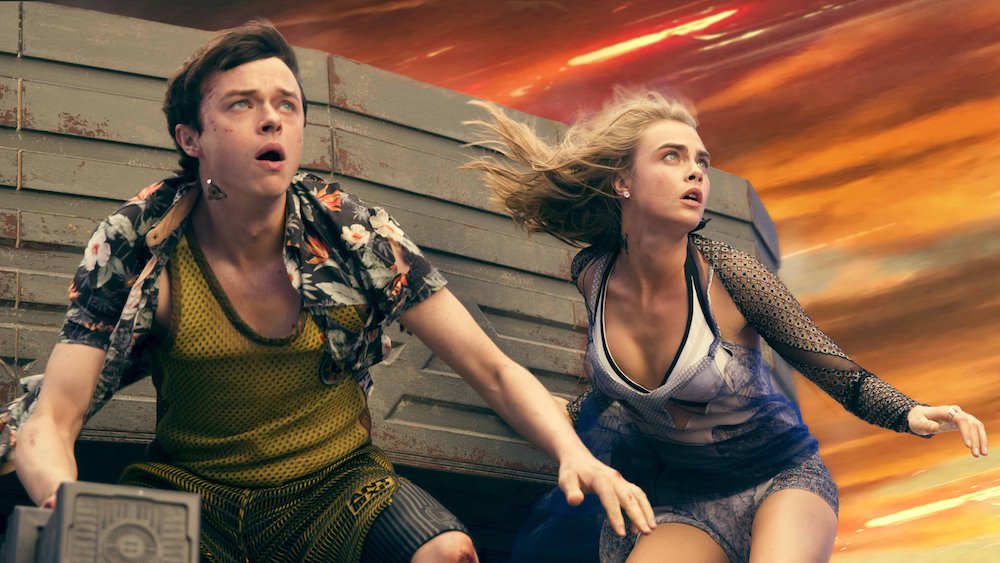 Besson is a fan of comic-book Valerian and Laureline, which was a major influence on Fifth Element in terms of the production design. The comic’s own illustrator Jean-Claude Mézières, after being recruited to work on Fifth Element, pointedly asked Besson “why are you doing this shitty film… why don’t you do Valerian?” Apparently, Besson didn’t think a live-action Valerian and Laureline could be made in ‘97 because of how many complicated alien creatures would be required, and only changed his mind when he saw James Cameron’s Avatar (2009).

It’s still taken almost a decade to arrive in cinemas, possibly because Besson threw out his original script after realising  Avatar had raised the bar even higher, and had to raise €197 million ($180 million) to pay for it. Valerian and the City of a Thousand Planets (hereafter Valerian) was always going to be filmed in the English language, so this meant Besson didn’t stand to benefit from France’s tax credits.

Whatever the difficulties bringing Valerian to the screen, it’s disappointing to see it was poorly received by many critics and struggled to recoup its costs. It’s grossed $225m at time of writing around the world, so it seems unlikely it’s going to turn a profit during its theatrical life, especially when you add on the studio’s additional marketing budget. It would be a shame if this means we’ll be waiting even longer for another grandiose epic like Valerian, however, because for all its character problems and narrative time-wasting… it’s visually stunning, pleasingly surreal, and very idiosyncratic. 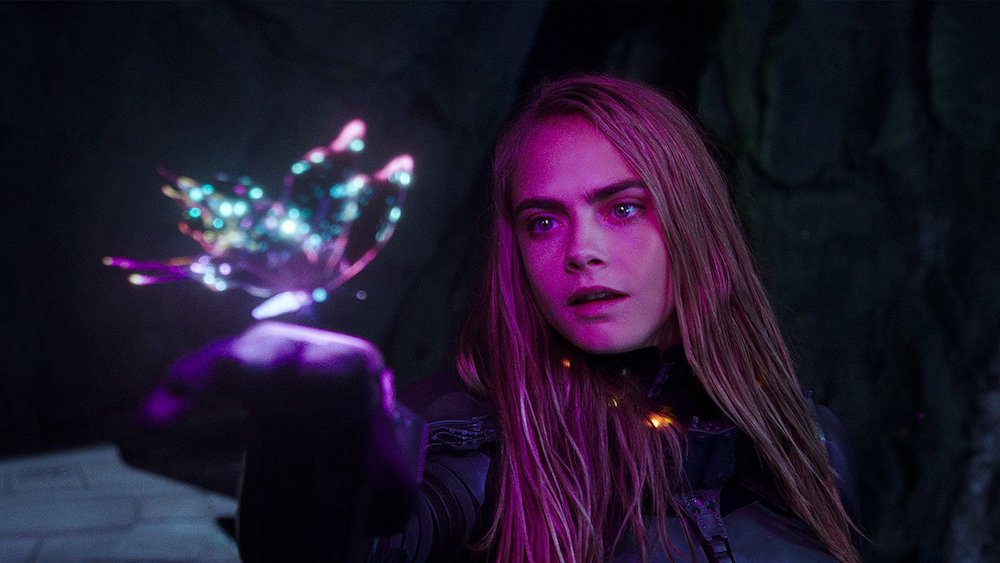 To summarise the plot: we follow the adventures of laconic Major Valerian (Dane DeHaan) and his no-nonsense girlfriend Sgt. Laureline (Cara Delevingne), who are both time-and-space-travelling agents. They’re tasked with retrieving a Mül converter by their boss (a rare creature able to replicate anything it eats. It was once a  vital part of the extinct Mül alien culture, who lived in harmony on a tropical planet, feeding these creatures high-energy pearls in order multiply their reserves.

It’s an awkward setup, coming hot-on-the-heels of a long opening sequence (set to David Bowie’s “Space Oddity”) where the titular ‘City of a Thousand Planets’ is revealed to have started out as the International Space Station. The ISS grew beyond all recognition over the centuries, until it was cast drift into the depths of space. It actually takes around 15-minutes until we even meet our protagonists, Valerian and Laureline, which is unusual for any movie.

Things don’t get much easier to swallow for awhile, as Besson drops us into an unfamiliar universe of oddball characters, strange cultures, weird technologies, and alien languages. But I rather enjoyed the experience of being challenged to make sense of everything, with the bare minimum of narrative crutches. It’s as close as you’ll come to being transported to the 28th-century for real and having to navigate your way around. You eventually come to understand how some corners of this universe work, but only just.

Not that Valerian is a complicated movie, exactly. The story is actually very simple. It’s just a sequence of chases and rescues in different locations. You’ll feel confused at the start, entertained but bewildered during the middle, then elucidated by the end. It’s a severe case of style over substance, that much is true. It could, and perhaps should, have been a much shorter movie. 137-minutes is stretching things past breaking point, but you do get a lot for your money by accepting Besson’s indulgences. 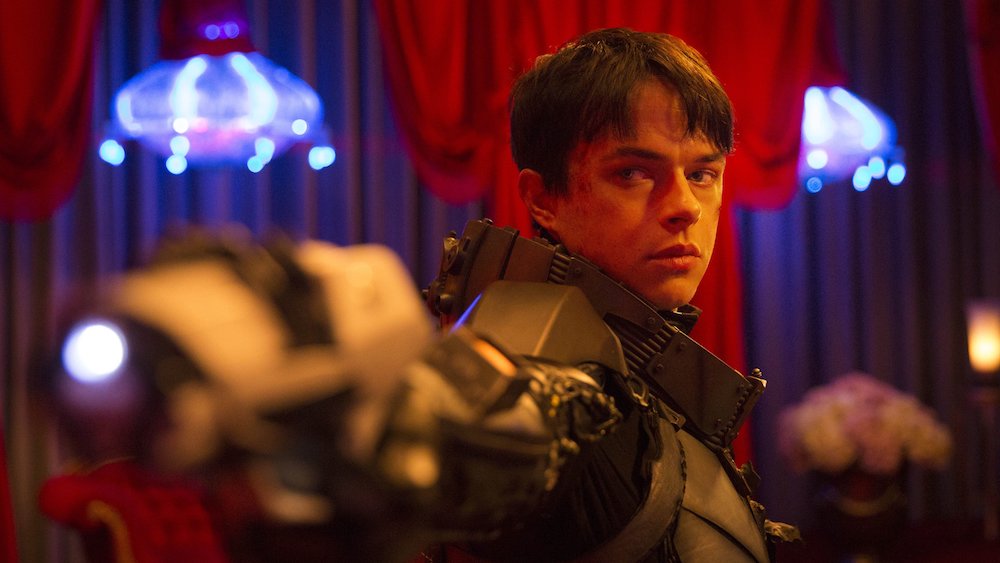 There are at least five sequences that prove memorable for some reason o another, with the best being a crazy inter-dimensional mission for Valerian and Laureline when they find themselves inside “Big Market”. It’s just a large patch of empty desert, where people go shopping using VR-style equipment that enables them to see and interact with another dimension.

There’s a long set-piece where Valerian enters Big Market with a heavy box attached to his forearm, which will enable him to retrieve the Mül converter from this neighbouring universe, while Laureline provides backup in their “prime dimension” of the desert where shoppers are just milling around in silly headsets. So you essentially have a Mission: Impossible-style heist happening across two different dimensions, with characters physically running around in the sand, while they perceive a totally different environment surrounding them, and we the audience flit between the two. It’s quite a mind-bender, but Besson pulls it off with aplomb.

Valerian is also one of the most colourful movies I’ve seen, and this makes a refreshing change to how sci-fi is typically handled by western cinema. Since Alien (1979) and Blade Runner (1982), we have a tendency to favour dystopian nightmares and cautionary tales in fantasied about the future of our species and our relationship with technology. 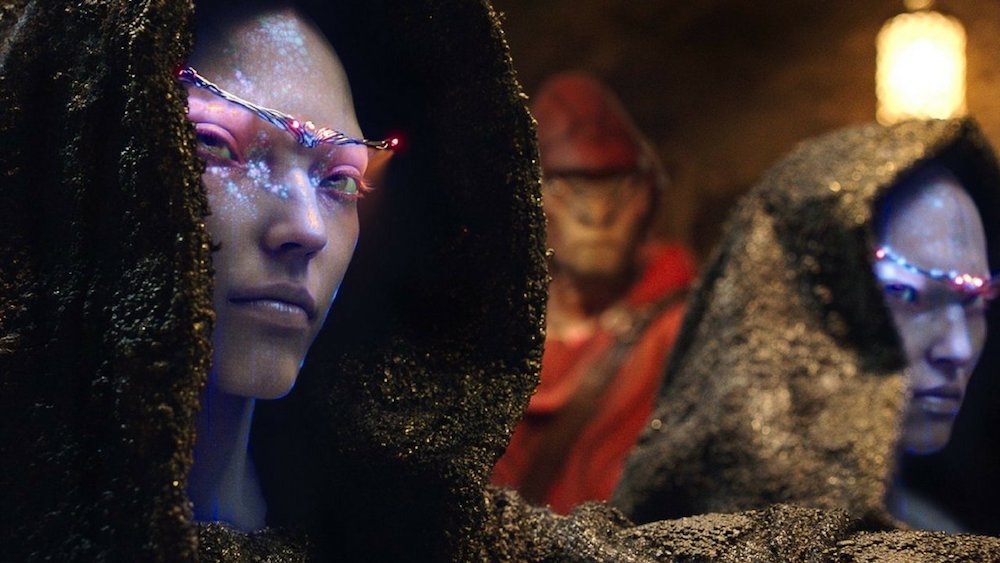 I’ve always thought people responded to the sheer vibrancy of Pandora in Avatar (perhaps more than they did the 3D format), and this is something Besson likely agrees with. The Fifth Element was likewise very colourful, but Valerian takes things to a new level of retina-scorching overload. I didn’t see it in 3D, where things would have been dimmed by the glasses, but have heard it’s one of the few 3D movies to deliver an Avatar-like sense of being transported somewhere else.

What lets Valerian down is how there isn’t enough meat on its bones to justify over 2 hours, and the performances are often strained. Besson seems to have opted for a similar double-act to The Fifth Element, by partnering a laid-back Hollywood star (Bruce Willis/Dane DeHaan) with a model-turned-actress (Milla Jovovich/Cara Delevingne), but he dropped the ball when it came to casting DeHaan. He’s a good actor, but he’s too young for this part — even at 31.

Valerian and Laureline are lovers but you can’t shake the feeling they’re siblings because of their youthful looks and facial similarities. DeHaan should have been replaced by someone either closer to 40, or nearer Delevingne’s age of 25 but with a more authoritarian vibe. They’re supposed to be the galaxy’s greatest agents, but together they feel like incestuous teenagers bumbling through a mission with good fortune on their side.

It’s easy to see why Valerian is going to split audiences down the middle, and it’s hard to argue against some of the criticisms. The humour and dialogue is a particular issue, as it either doesn’t quite translate, or sounds too cheesy. A lot of money was thrown at the screen, and not everything works, but if you allow yourself to be swept along and savour moments unlike what you’d see in a Star Wars movie…it has the makings of a cult hit on DVD you’ll regret never seeing on the biggest screen.