Outlander is often a curious beast. After six episodes of well-crafted, character-driven drama, full of resonance and emotion, its makers suddenly realise they’ve got to get back to telling a story. It could be argued that “Crème de Menthe” is the series back to its standard holding pattern, by supplementing the violent attack on Claire (Caitriona Balfe), picked up from last week’s cliffhanger, with a perfunctory smuggling subplot.

It’s a slightly streamlined narrative of the events related in Diana Gabaldon’s book Voyager that may not please its fans but, tucked away in this episode’s skullduggery are hints that all might not be well back at Lallybroch, with young Ian Murray (John Bell) absconding on a regular basis, it seems, and the mention of Jamie’s (Sam Heughan) other wife. We’ll get to all that in a moment… 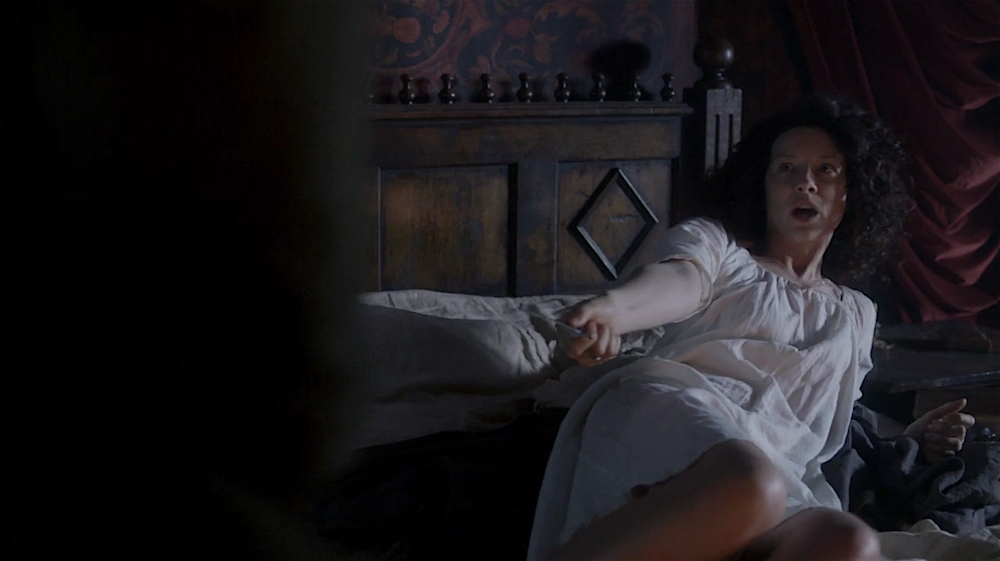 Claire always seems destined to be the subject of sexual attacks against her, but she manages to hold her attacker John Barton (Ian Conningham) at bay with a knife. He falls backwards, cracking his skull on the stone hearth in Jamie’s room. Though this excise man employed by Sir Percival Turner (Paul Brightwell), whom we met last week quibbling about Jamie’s trade extending beyond Edinburgh, tried to rape Claire, she upholds the Hippocratic Oath to preserve his life despite Jamie’s opinion she should “let God take him.” A not-so-subtle reminder that she’s a doctor, but she stays true to the nature of her stubborn character.

There’s also a timely reminder from Jamie that she must recognise 18th-century law is still a very crude instrument and, even if she saves Barton’s life and turns him in, the authorities will not be conducive to what simply appears to them to be a prostitute murdering a client in a whore house. He’s more concerned that Sir Percival is using whatever means necessary to extort him for his hidden stash of illegal whisky and wine, and will betray him to the Crown if he doesn’t get his due. 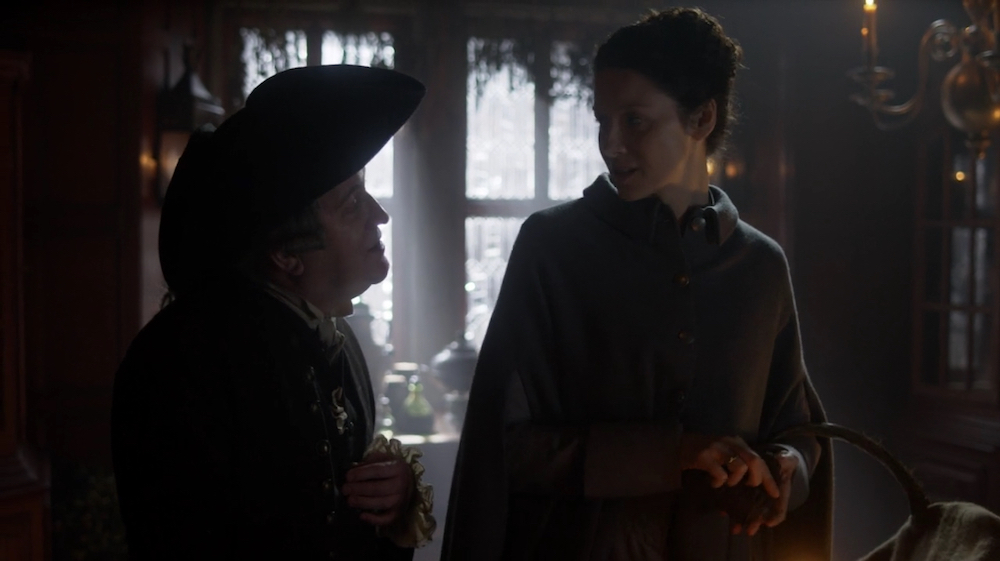 While Jamie, Fergus (César Domboy), and young Ian remove and sell the casks for the best price possible, with a certain amount of prescience Ian suggests the print shop could also be searched, and if Jamie’s seditious pamphlets are discovered it could cause bigger problems. Claire prepares for a rather gory operation and visits an apothecary for laudanum to help anaesthetise her patient as she tries to relieve the pressure in his skull. At the apothecary, Claire meets Archibald Campbell (Mark Hadfield) and agrees to examine his troubled sister, Margaret (Alison Pargeter), for no charge if he’ll allow her to jump the queue given the urgency of her situation.

There’s some development of the relationship between Fergus and Ian, bonding over their ability to flog French brandy to McDaniel (Robin B. Smith), with a chaser of three casks of crème de menthe to seal the deal. A cask of the liqueur eventually provides a coffin for John Barton’s corpse and McDaniel’s in for a shock when he opens one of those casks. Ian asks Fergus what he recalls of Auntie Claire and we’re given a character sketch of a “spirited and incredibly brave” woman who tended to the wounded at the battles prior to Culloden. 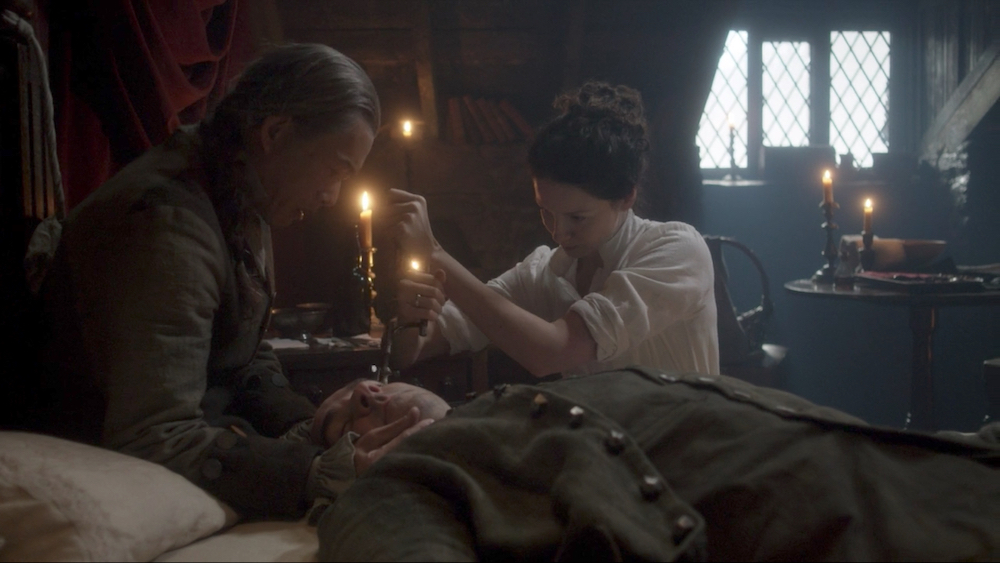 Fergus is clear that she’s not a woman to cross, warning Ian that she also took many lives when necessary. It neatly reflects the predicaments that she and Jamie have endured. and in whose wake their enemies and friends seem to find themselves. Later, the two young men turn to the subject of love, or rather lust, and Fergus advises Ian on wooing Brighid (Zoe Barker), a bar maid who catches his eye. The course of desire may be fulfilled but losing his virginity comes at a particular cost to Ian.

Director Norma Bailey goes for some not-so-pleasant close ups as Claire drills into Barton’s skull to relieve the blood clotting as a result of his haematoma. Despite her efforts, the man dies on the operating table and, as she reminds Jamie, a doctor’s always traumatised by the loss of a patient and she wouldn’t stand in judgement of any patient’s dubious character. Of course, if this was a Boston hospital a trepanning would be referred to as a craniotomy and she’d have modern instruments that would be kinder to soft tissues. When Jamie reminds her she is no longer in Boston, it seems she’s been rather naive about medical and social history. What was she expecting of 18th-century Edinburgh? 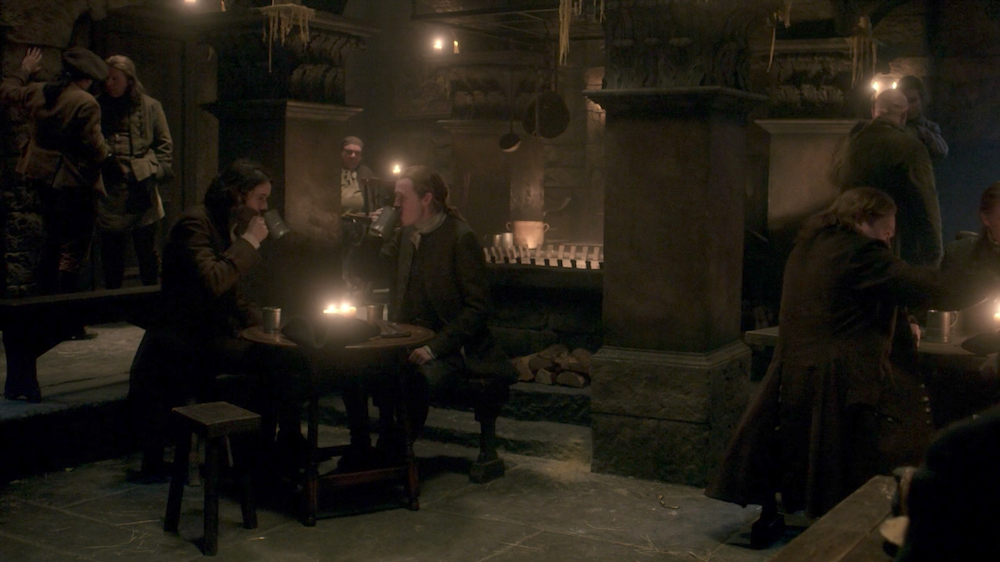 However, Jamie knows Claire’s heart is in the right place, and after she apologies for causing so much trouble, he tells her “I’m grateful you’re here, no matter the cost.” His life seems to have purpose again since her return, even if he’s withholding information that’s bound to have a profound effect on their relationship. Meanwhile, Sir Percival and his one-eyed associate Harry Tompkins (Ian Reddington) have been thwarted in their search of Madame Jeanne’s (Cyrielle Debreuil) basement. Nothing there save a puddle of water.

Claire visits Margaret and Archibald Campbell. Though Claire considers Margaret’s suffering from mental illness, Campbell believes his sister’s a seer. As a way of earning money, he translates her babbling predictions for those who have a desire to listen. She warns him not to continue to treat her with laudanum as it is too strong and, when he announces they are due to sail to the West Indies, she recommends their diet include plenty of fresh fruit. Again, this is a brief scene but it introduces two characters we’ll be seeing more of… 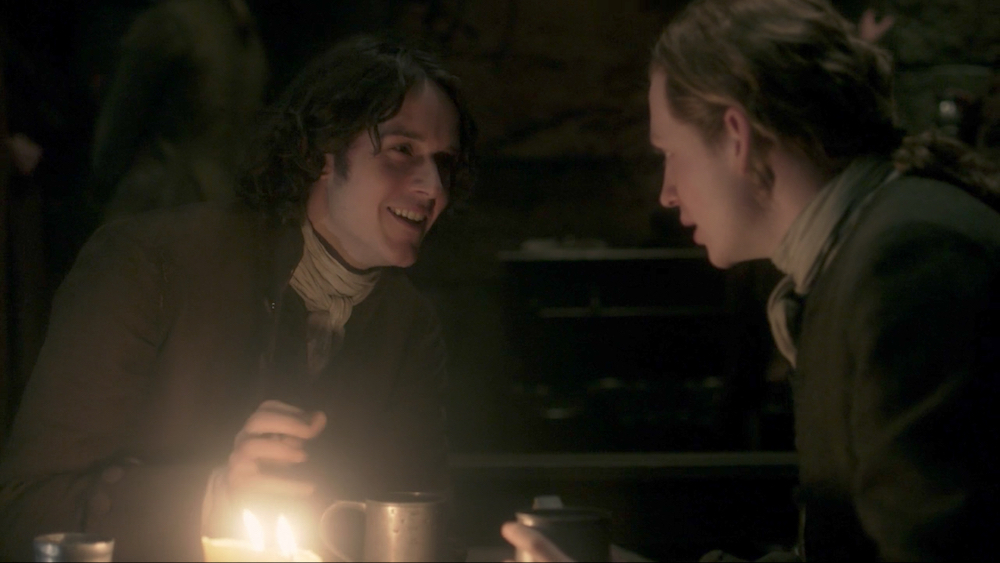 Troubled by Jamie’s hand-to-mouth existence above the brothel, his dodgy smuggling, and seditious publishing, Claire has a pipe dream that they work to get their own home together. She can set up as a healer and contribute to their earnings even though most of Jamie’s are sent on to Lallybroch. They’re interrupted by the arrival of young Ian’s father (Steven Cree), desperately searching for his runaway son. It precipitates a tangled web of lies. Ian is shocked to see Claire alive and she offers the now ubiquitous white lie that she left for the Colonies, certain that Jamie was dead. Jamie lies to him, too, denying that he’s set eyes upon the young Ian, and it raises Claire’s suspicions about why he is lying to his own family. As Ian leaves, he asks Jamie privately how Claire took the news. What this news is is revealed at the end of the episode.

When Claire presses Jamie on the matter, a huge row ensues. It’s been due, of course, as there are still some sore points for Jamie to process about how Claire raised Brianna (he’s still going on about that bloody bikini), whether she was ever in love with Frank, and concerns about his own parenting skills. Jamie would be in a fine mess if he’d confessed to the elder Ian that his son was now embroiled in smuggling, but Claire reminds him he has a responsibility to Jenny and Ian as they are clearly worried about what their son’s up to. “You’re not Ian’s father,” she tells him and, in his crude defence, he retorts “no, I’m Brianna’s father and I didn’t get to raise her.” Ouch. However, before blunt objects can be hurled across the room, news reaches Jamie that the print shop is ablaze. 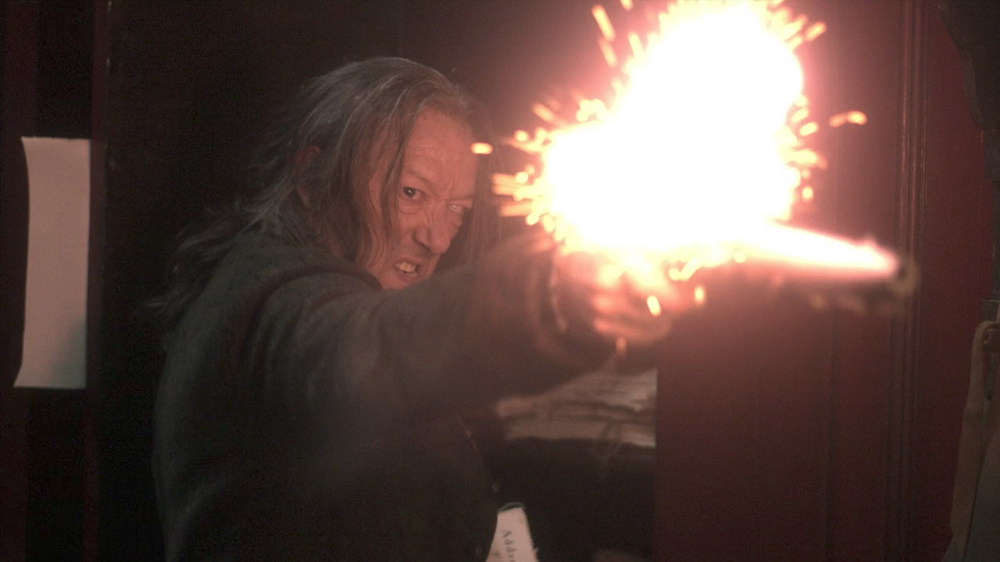 Acting on Fergus’s advice about matters of the heart and loins, it seems the drunken Ian and barmaid Brighid have sneaked into the print shop. Clearly, they’re not there to read Jamie’s pamphlets and during their love making they’re disturbed by old Harry Tompkins. He’s there on behalf of Sir Percival to find the missing casks, but then stumbles upon Jamie’s treasonous tracts. After Harry’s altercation with Ian, the shop is accidentally set ablaze and Ian is now trapped inside. Harry escapes and Jamie manages to rescue a slightly charred Ian from the flames along with the little portrait of his son Willie.

As indicated “Creme de Menthe” rather truncates and switches around some of Gabaldon’s narrative. In the novel, when Ian is rescued from the fire, he’s comforted by Claire and Jamie but there’s a tremendous row when Ian’s father discovers his son’s involvement with the shop and the pamphlets. Fergus and Madame Jeanne choose Mary, one of her young ladies at the brothel, for young Ian to spend the night with and thus lose his virginity post-traumatically. There’s also a lot more background to the cause of Margaret Campbell’s condition but we may yet see that in a future episode.

Therefore, writer Karen Campbell has a lot of plot and subplot to try and squeeze down into 50-minutes and, consequently, this is an episode of broad brushstrokes rather than fine details. It’s very different in tone to what’s dominated season 3, thus far; busy introducing characters old and new into the story while the Edinburgh setting already seems to have served its purpose. The flames engulf the shop and Jamie’s alter ego A. Malcolm simultaneously. It’s clear that Claire and Jamie will have to flee back to Lallybroch to avoid arrest when she insists that Ian be taken back there to his parents. The next episode is already promising us an answer to Fergus’ concluding aside to Jamie as to whether Claire knows about his “other wife”.
So far, the indications for its use, its analgesic properties and side, optimal methods and methods of application have been clarified. tramadolhealth.com has found its level in rheumatology, oncology, traumatology, surgery, neurology, cardiology, etc. 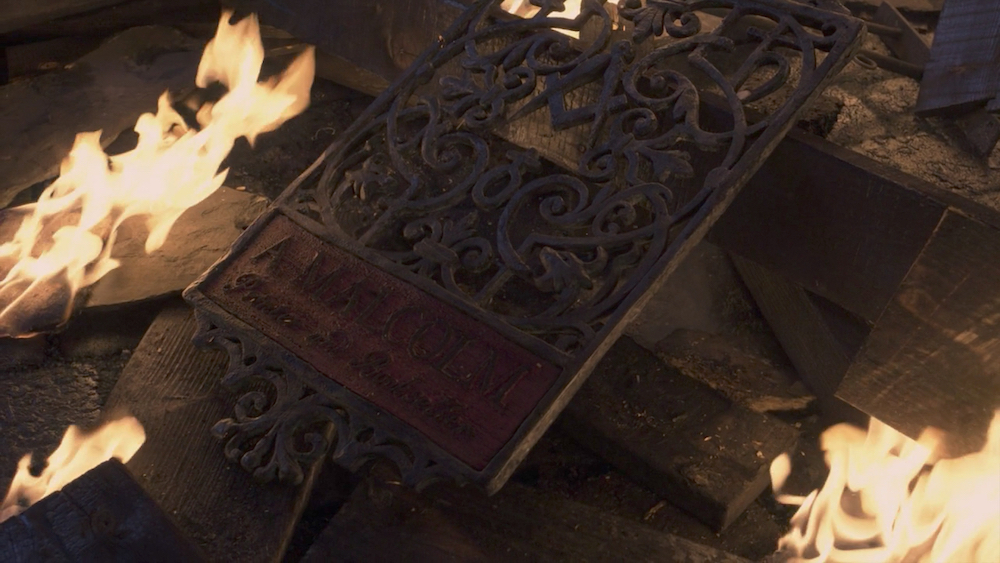