Oh, Sam Esmail, you terrible tease. Season 2 of Mr. Robot came to an end with the reveal that it was… an extended trailer for what promises to be an excellent third season. Okay, so that’s a little bit unfair—but really, Mr. Esmail, there’s withholding information from the audience because it increases tension, and there’s withholding information just because you can. Too often this season I felt as though the latter was what was occurring.

I couldn’t let any one stop this… including us.

And yet, looking back I’ve never given less than three-and-a-half stars to any episode over the course of this season, and that holds true for the finale. That’s because, even when Mr. Robot is at its most opaque and frustrating, it’s still fascinatingly unlike anything else out there. There will always be a couple of moments each week that leave me gasping in admiration—this week, the wonderfully shot scene in which Dom (Grace Gummer) led Darlene (Carly Chaikin( to the FBI’s big wall of actually pretty accurate conspiracy theories—plus Esmail’s ambition in the writing, and Rami Malek’s headlining performance, have me desperate to find out how this story ends.

Will we end up down a Lost-shaped wormhole? I sincerely hope not, because no show better captures the weirdness of the world we’re currently living in. I’ll forgive Esmail any number of references to Fight Club and homages to David Lynch, for the way in which he so accurately taps into the paranoia of our age. 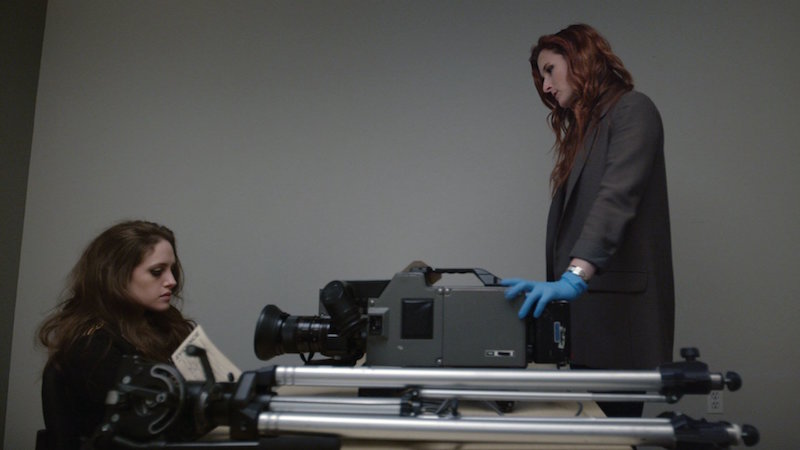 We were supposed to be gods together yet you want to destroy our destiny.

So what did we learn as the second season came to a close? Angela (Portia Doubleday) has made a deal with Whiterose and gone over to the dark side (although when your choices are Philip Price and E Corp, or Whiterose and the Dark Army, I’m not sure there’s really a dark side to go over to as such). Darlene survived and Cisco died (which was a surprisingly straight decision from Esmail). Unfortunately for the younger Alderson, she’s now in the hands of Agent Dom DiPierro and I can’t see the tenacious FBI agent loosening her grip for one second. Through Darlene and Dom’s scenes, we also learnt that the Feds haven’t actually been blundering around in the dark, as previously assumed, but rather doing their job pretty well and playing the long game to ensure they trapped ‘the python’ (as Dom put it) at the end. Unfortunately for them, they appear to believe that said python is Tyrell (Martin Wallström) rather than Elliot, which means they’re not yet on the mark.

Or are they? The biggest mystery of this show, ‘who or what is Tyrell Wellick?’ remains vague. I think the episode made it clear that Tyrell does exist because (a) he shot Elliot and Elliot didn’t then get back up as he did in the fake shoot-out early on in the season (nice foreshadowing Esmail, I love a man who not only pays attention to Chekhov’s gun adage but also applies it literally, twice), and (b) when Angela spoke to Tyrell on the phone she clearly responded to him as Tyrell not Elliot.

That said, this is a tricky enough show that doubts lingers. Angela could conceivably know Tyrell as an alternate of Elliot’s. Her ‘hello Tyrell’ might, therefore, have been an acknowledgment that Elliot had temporarily lost control of the host body to Tyrell. Against that, Tyrell didn’t flicker in the way that Mr Robot (Christian Slater) did when Elliot got shot, which makes me think he’s not an alternate. I actually think the fake-out came earlier, when Tyrell, Mr Robot, and Elliot viewed the plant where Stage Two of the master plan will occur, and referred to themselves as ‘we’. I think Esmail wanted us to think Tyrell was an alternate, only to then pull back the curtain and go ‘oh no he isn’t!’ 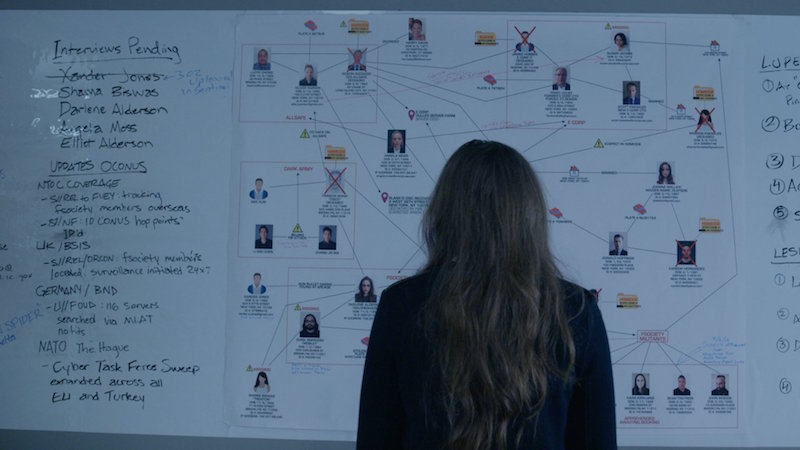 Okay, so what’s up with Tyrell’s suspiciously uncrumpled suit and tie? Surely he’d be more dishevelled after weeks on the run; even evil Danish master villains don’t have access to dry cleaning 24/7 (I don’t think). Actually, this bit is pretty simple. Way back in episode 1, Elliot told us that he’d trained himself to only hear Evil Corp when people said E Corp’s name, and I think Tyrell’s appearance is just a more extreme manifestation of this. A man who can construct an entire alternate reality while in prison is going to have no difficulty in seeing his partner in crime the way he wants to see him. Tyrell appears immaculate to Elliot because Tyrell has always appeared immaculate to Elliot. We can’t know what he truly looks like until we see him through someone else’s eyes. If indeed we ever do.

As to why Tyrell’s involved with Elliot… that’s a very interesting question. I’ve seen it suggested that his personality is markedly different this season, but I don’t agree. Tyrell has always been a mess of conflicting emotions and I found it pretty easy to imagine him fixating on Elliot as someone whom he could finally relate to, who had similar father issues, who understood him. There’s also the possibility that Tyrell and Elliot’s relationship is far longer and more complicated than we know, that there’s a forgetting Darlene thing going on here, and that maybe there were originally four friends growing up back in Jersey. Hey, it’s a theory! And on this show, that’s pretty much all we’ve got. 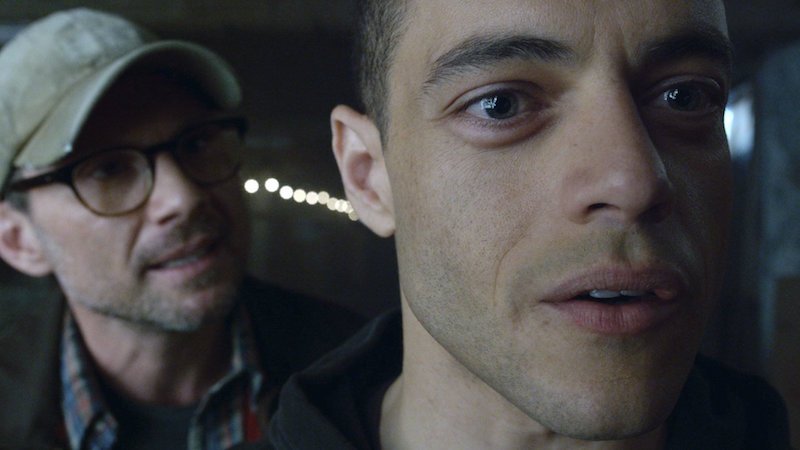 Fuck her and her foetus corpse.

Also playing the long con—and delivering one of the most shocking lines delivered on television in the process—the ever-mysterious Joanna Wellick (Stephanie Corneliussen), whom it turns out has been setting up both her bartender boyfriend and the CTO of E Corp since the end of last season. If you remember, pretty much the last thing Joanna said to Tyrell before he disappeared was “if you can’t take care of this, I will.” And, lo and behold, she’s even going so far as to get herself beaten up to ensure that her besotted boyfriend will go through with framing the grieving Scott Knowles for his wife’s murder. The murder we all know Tyrell committed. It was a nice reveal, although I could’ve done without yet another scene of a woman being battered on television. One of the great things about Mr. Robot is its clearly written and well-rounded female characters, something that’s been very much to the fore this year. The way the camera dwelt on Joanna’s beating felt like something from a different, less interesting show.

I’m giving this a solid 7, if only because it’s still not really clear what Tyrell’s game actually is.

So what did you think? Is Tyrell real? What’s Angela’s deal? After Fincher and Lynch which famous auteur named David will Sam Esmail pay homage to next year? And will we ever really know what’s going on? All speculation is welcome below and thanks to everyone who’s taken the time to drop by and read. Hopefully, I’ll see you back here next year.

Written By
Sarah Hughes
More from Sarah Hughes
First off, apologies to everyone for the late arrival of this recap,...
Read More