The Men in Black trilogy is one of my favourite film series. At its best, they’re a clever commentary of society and our issues dealing with differing cultures. At its worst, they’re fun sci-fi action adventures. Due to smart scripts and the impeccable chemistry of Will Smith and Tommy Lee Jones, the first three MIB films are beloved by many. So how did Men in Black: International go so wrong?

On paper, MIB:I sounds like a great way to continue this 22-year-old franchise. Chris Hemsworth and Tessa Thompson had great chemistry in the exuberant Thor: Ragnarok (2017), director F. Gary Gray was riding high on the success of Straight Outta Compton (2015) and The Fate of the Furious (2017), and there’s a great supporting cast that includes Rebecca Ferguson (Mission: Impossible—Fallout), Liam Neeson (Widows), Emma Thompson, and Kumail Nanjiani (The Big Sick). It sounds like a recipe for guaranteed success… but something went wrong when this meal was being cooked. 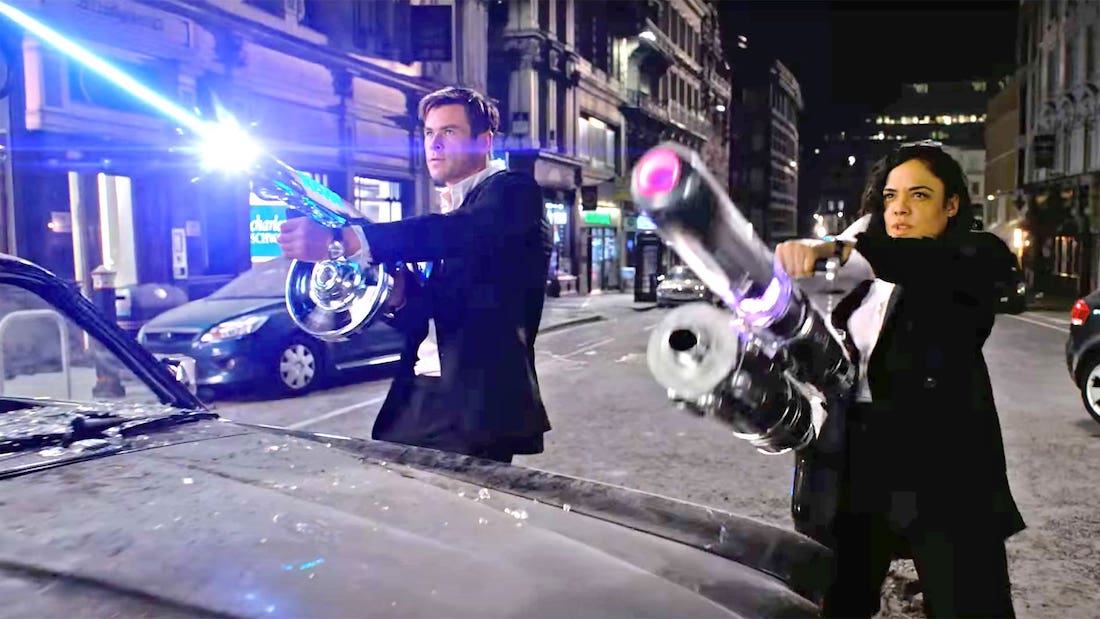 Everything in this fourth outing has the finesse of a sledgehammer. Agent M (Thompson) is a smart, determined new MIB agent who bluffs her way into a black suit. Agent H (Hemsworth) is a seasoned agent who likes to work alone and once saved the world with his partner, High T (Neeson), who’s now the head of the MIB’s London branch. However, there’s now a mole in the organisation feeding information to a race of shapeshifting aliens known as The Hive, so Agent H and M must find them and stop a powerful MacGuffin from falling into the wrong hands. And all of this is explained through copious amounts of dialogue.

Gone are the interesting, well-written characters from Barry Sonnenfeld’s movies. Thompson is saddled with the motivation to “find out how it all works,” whatever that means. Hemsworth and Liam Neeson have a father-son relationship that isn’t believable in the slightest due to Neeson’s wooden performance and their poorly-written dialogue. Our two protagonists are so thinly-sketched, they’re nearly invisible. The chemistry Hemsworth and Thompson showed in Ragnarok is bafflingly nonexistent here, perhaps suffocated by the needs of a paint-by-numbers script. They give it their best shot, but the material gives them nothing to really play with. In fact, the only character that works is Pawny (Nanjiani), a tiny alien who pledges loyalty to Agent M after losing his Queen. Thanks to a vibrant vocal performance, Nanjiani steals the film from under the noses of his more famous co-stars, getting all the best lines and delivering the only humour that works. 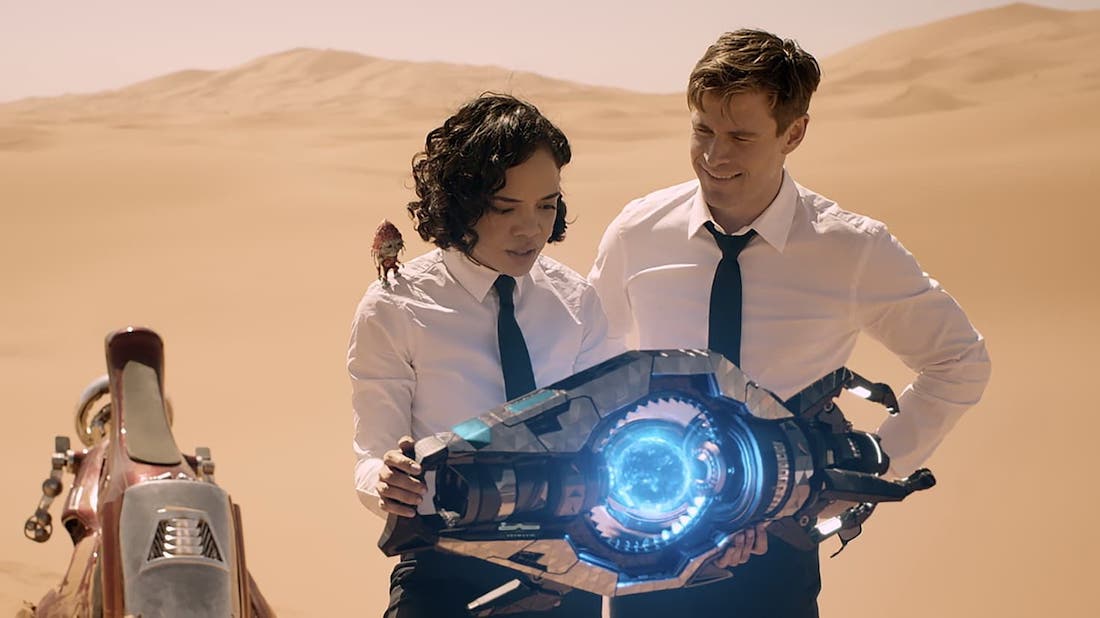 Another thing sorely missing from MIB:I is the ingenious practical FX that was so prominent in the original films. F. Gary Gray slathers his movie with CGI-bloat that contains some of the worst digital FX I’ve seen in a summer blockbuster for years. This would be forgivable if the creature designs were unique or memorable, but all of the extraterrestrials look like half-finished concept art. And, of course, the final act involves the played-out trope of a computer-generated sky beam.

What makes the rote third act so disappointing is how the story wastes a genuinely interesting creative decision involving the two leads, which is dropped too soon. Instead of utilising it to comment on refugees and oppressed cultures, Gray tosses the idea out the window for an underwhelming Big Boss fight that evokes memories of the turgid Fantastic Four (2015). Boring and unoriginal, MIB:I’s climax goes through the motions with all the enthusiasm of a sloth, and none of the emotional beats land as intended. 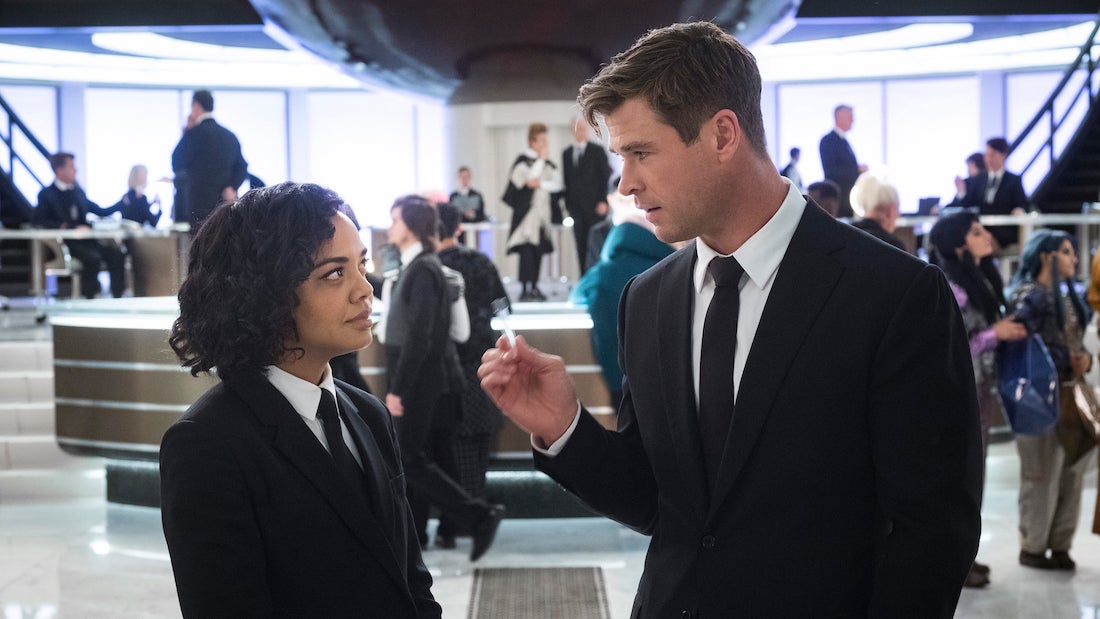 It’s clear that Gray wanted to make an espionage thriller with sci-fi elements, but he takes the worst aspects of the genre and coldly injects them into the MIB milieu. The action sequences are run-of-the-mill, focusing on workmanlike gunplay and hand-to-hand combat, executed with none of the pizazz he brought to Fast and Furious. At times, MIB:I’s downright sexist, too, treating women as sexual objects instead of intelligent and capable human beings.

Men in Black: International is a poor attempt at big-budget summer entertainment. There are some fun Easter Eggs for fans of the previous films, and Nanjiani lights up the screen with a great vocal performance, but there’s little else to praise here. If this was supposed to launch another trilogy, it’s time to neuralise the Men In Black forever.